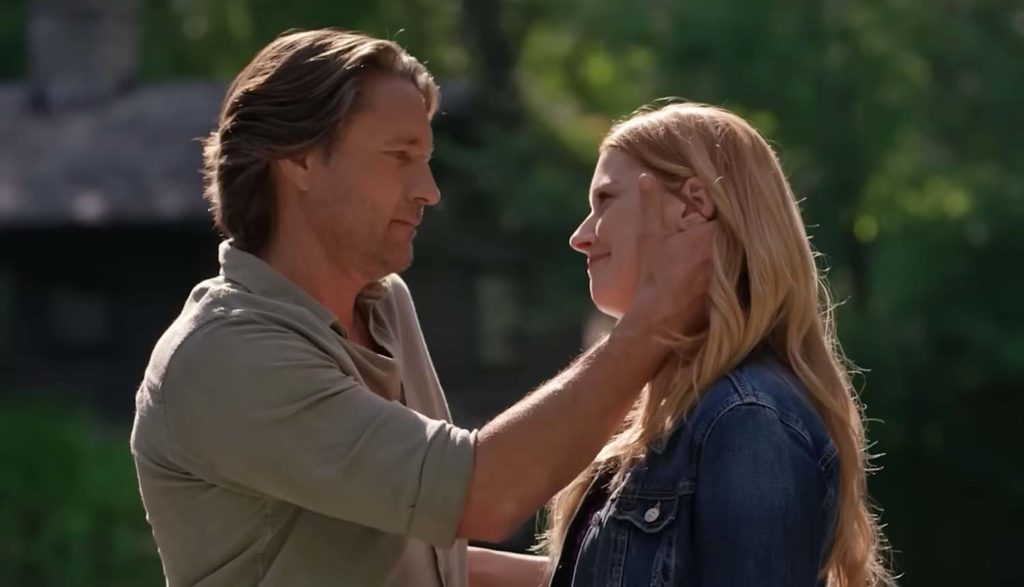 Nurse and midwife Melinda Monroe, known to most as Mel, is ready for a new start.

After unexpectedly losing her husband in a tragic accident, Los Angeles no longer feels like home. No matter what she does, it seems that moving in forward in life, although necessary, is the most difficult thing of all. And often she’s not even sure if she can. But something has to change.

Which is why she’s just accepted a job in her field in Virgin River. A small town in Northern California, Virgin River is an unassuming place where everyone knows everything about their neighbor. The exact opposite of a big city. And while small-town gossip isn’t Mel’s cup of tea, she’ll do whatever it takes to get some distraction from past trauma. Even if that comes in the form of a nosy but loving community.

There’s Hope McCrea, the town’s mayor and queen of what’s happening when. Then there’s Doc, Mel’s old school, rough around the edges boss who has finally warmed up to her and is now looking for a replacement in his old age. There’s Preacher, an ex-Marine with his own secrets and life-endangering responsibilities; town bad-boy Brady; nosy widow Connie and her niece Lizzie; Marine-bound Ricky; and plenty of others full of muddled stories.

And if you think that’s complicated, just wait. See, although Mel is trying to heal, she has a lot of secrets she’d prefer to keep to herself. Kind of like former marine and local bar and restaurant owner Jack Sheridan. Since the day Mel stepped foot in Virgin River, she and Jack have had an instant connection. And their new relationship with one another is only making life more complicated, as are their past traumas and current dramas. Like the fact that Jack’s ex-girlfriend is pregnant with his twins and her new hubby wants to take the babies away from Jack; or the fact that Mel is pregnant with a baby that might be Jack’s but could also be her late husband’s (since she went through a round of IVF shortly before she and Jack did the deed).

Throw in the rest of the town and you’ve got one big, messy family. The kind who are always there for you even when you don’t want them to be.

A LITTLE BIT OF EVERYTHING

Netflix’s romantic drama, Virgin River, is based off an award-winning book series of the same name. Each episode clocks in over 45 minutes and is jam packed, from beginning to end, with enough drama and tension to keep viewers wanting more. If you don’t believe me, just look at the ratings for this show or the sheer number of books sold. It’s wild.

There’s romance, a bit of action, emotional connection and deep character development. Mix that in with trauma and war stories and you’d think Netflix was trying to get wives and their husbands hooked. And while there’s plenty to like here when it comes to moral messages, defending the vulnerable and supporting the needy, there’s also enough to warrant caution.

First, Mel’s past experiences and trauma come in flashbacks that could easily trigger anyone who has lost a loved one or a child. The same goes for Jack. He struggles with severe PTSD and it seems that no matter how much he drinks, his night terrors are never far away.

There’s also illegal drug trading and growing that goes on right outside of Virgin River (which is not praised, by the way), resulting in people getting shot. Then there’s underage drinking, light language, tons of gossip and couples that get in between the sheets every now and then.

So, before you venture up into Virgin River’s fictional forests, just know that not everything that takes place here is fit for the whole family.

Mel and Jack prepare for the arrival of their baby. Meanwhile, a new doctor takes over at the clinic so Doc can be with Hope as she recovers from her brain injury.

Several couples kiss. Jack has a nightmare of a pregnant Mel kissing her late husband (since the baby could be either of theirs). We see an unmarried couple sleeping in bed together. Several women (including married ones) make fake doctor appointments so they can meet the new, attractive doctor. When his grandson shows up on his doorstep, Doc learns that a woman he knew many years ago (and believed to be dead) had his child and never told him.

Jack flashes back to the night he got shot. Two men fight in prison, then one is stabbed with a shiv. Mel mentions that Doc greeted her with a shotgun when he first met her. We hear about a child that was kidnapped by his uncle.

Jack and Mel confess their fears about Mel’s high-risk pregnancy. When Doc realizes that Hope’s brain injury caused her to forget that her best friend passed away, he must explain the painful story to her again. Many people lie and keep secrets.

In this Season Three Premiere, Doc struggles with his health and searches for another doctor as his replacement. Mel is hesitant to celebrate her birthday due to past trauma. Jack tries to remember who shot him and braces himself for future attacks.

Jack and Mel kiss and make out. They also take a bath together (though we don’t see any exposed body parts) , and have a conversation about sexual activity. A teen girl sports a bikini.

Jack is rushed to the hospital after a near-fatal shooting. We see a bit of blood and medical staff discuss medical procedures and loss of blood.

In this Season Two premiere, Mel returns to Virgin River after grieving the loss of her husband and daughter; Hope isn’t ready to go public with her new relationship; Charmaine, wrestles with pregnancy complications; Preacher asks Paige about her harrowing past.

A drug addicted man breaks into a doctor’s office. A woman recounts horrific moments of physical abuse from her ex-husband.

Mel and Doc discuss Jack and Charmaine’s casual love affair. A couple kisses, flirts and discusses the future of their relationship. A woman wears a cleavage-baring top.

God’s name is misused once and the word “d–n” is heard twice. Men and women drink beer, wine and hard liquor. Doc tells Hope that she’s the biggest gossip in town. A bitter, jealous woman is rude to her lover’s female friend.