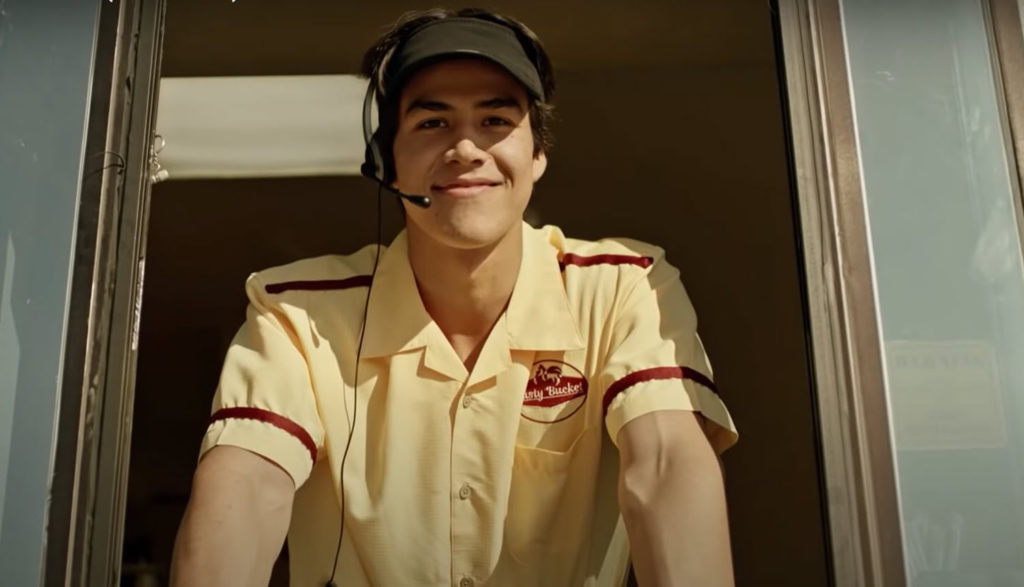 It’s not his grades, though they’re admittedly pretty bad. It’s not his propensity to drink and use drugs. Almost everyone at Jared’s British Columbia high school does that. It’s not the fact that he also makes and sells drugs, either. In fact, given his family’s dysfunction, that makes him downright responsible. (He’s the only one capable of paying the bills.)

No, it’s the skin monsters that seem to be after him. And the talking ravens. Oh, yeah, and the doppelgangers of himself that he sometimes runs into at parties.

Too bad Jared’s guidance counselor can’t help him with any of that.

Blood Is Thicker Than Beer

Jared, part of British Columbia’s indiginous Haisla community, has long understood that his family wasn’t, y’know, in great shape. His mother drinks, smokes and parties like an entire 1980s hair band. Oh, and his mom, Maggie, seems kinda crazy, too—like “talk to the walls” type of crazy. When Maggie’s drug dealer threatens to kill her for owing him money, she decides to sleep with the guy, then convinces him to burn down his own trailer for the insurance. “Arson and insurance fraud to settle a drug debt?” Jared asks her later. Yep, that’s about par for the course.

Jared’s separated dad, Phil, is just as messed up, if not quite so dramatic. A former (and possibly current) opioid addict, Phil leaches as much money as he can off Jared to pay the bills and fund his habits. Oh, and Phil’s girlfriend—who doesn’t look that much older than Jared himself—is pregnant, too.

But Jared is uncovering a new wrinkle in his family tree. A mysterious stranger seems to have some sort of connection to the teen. Oh, and he sometimes turns into a raven. Could this strange fellow be one of the infamous “tricksters” of Haisla myth? And could he possibly be Jared’s real father?

The Trick’s on Us

Trickster, based on Eden Robinson’s 2017 bestselling book Son of a Trickster, might feel at first blush like a typical CW show: Teens behaving badly while dealing with a supernaturally-tinged world. But the show, which originally aired on Canada’s CBC Television in 2020, has higher aspirations than that.

The story feels part restructured myth (pulling characters loosely from traditional Haisla beliefs), part fable (using those myths to draw broader narrative themes, touching on the drug use and poverty that so plagues the Haisla and other indigenous communities). These themes proved to be resonant enough that Playback, a Canadian entertainment industry magazine, named Trickster its Scripted Series of the Year.

That’s all well and good, of course. But it doesn’t really do much to justify the show’s problematic content.

Yes, the substance abuse we see from Jared and others is meant to point to some very serious real-world problems. (According to the Canadian Medical Association, First Nations youth who use drugs are 13 times more likely to die than the typical Canadian in the same demographic.) But that doesn’t minimize the impact of seeing so much bad behavior on screen, which certainly normalizes it and occasionally winks at glamorizing it. Sexual contact between minors is reputedly part of the show’s storyline, too (though it doesn’t show up in the first couple of episodes).

And the blood? Occasionally, the show can look like more a part of an R-rated horror film than a teen-centric network television show. And, of course, we haven’t even talked about the show’s inherent spiritual issues. Characters are described as witches, and one or two may qualify as gods.

Trickster feels like it tried to transcend CW’s tired, salacious, youth-oriented formula. And perhaps in some ways, it does. But in the end, it feels like the trick’s on us: the same old problems in just a slightly different form.

Jared does his level best to keep his woefully dysfunctional family afloat—but he does so by making and selling Ecstasy. When he loses his cover job, and when his mother’s drug dealer demands that the family find $3,000 in three days, Jared’s understandably worried. Also worrisome? The version of himself that he sees at parties—and who stole all of his drug equipment and money.

Speaking of drugs, we might as well start there. We see Jared in the process of making the drugs (donning a gas mask in order to manufacture the MDMA). We see him sell it, too: Working in a fast-food drive thru, he hands a few tablets off to anyone who asks for “extra-salty fries.” We don’t see him use his own merchandise, but he takes plenty of other substances—smoking a joint that his mother gives him, drinking himself to near oblivion at a party.

He’s practically a tee-totaller when compared to his mom, Maggie, who loves to drink, smoke and throw parties. Jared’s father, Phil, admits that he drinks heavily, too. (The only person who could keep up with him, he brags to Jared, was Jared’s mother.) He smokes as well, and a huge ashtray is filled with what look to be hundreds of cigarette butts. Both Mom and Dad offer the teenage Jared alcohol, and Jared goes to parties where lots of teens are drinking and “tripping.”

The show opens with a flashback, wherein a man looks as though he’s killed via a magical scream (as he carries an infant to what appears to be a magical tree). Blood seeps from his mouth and eyeballs as he appears to die. The man shows up later, though, sometimes in the form of a raven.

A girl about Jared’s age tosses out a huge chunk of moose meat, blood covering her top. A dog is hit and killed by a car. (The death takes place off camera, but we hear the yelp.) Someone’s thwacked in the head with a frying pan, knocking him unconscious. (We see the victim get a bit of impromptu treatment as he sits, pants down, on a toilet.) A man points a gun at another man’s head. (The gun turns out to just be a squirt gun.) Jared buries a dead animal found at the side of the road.

We see some cleavage from one or two females. A man goes shirtless (exposing both Christian and Satanic tattoos). Jared vomits at a party. Someone else runs to the bathroom to throw up. People lie. Maggie burns down someone else’s trailer so she and the “victim” can split the insurance money—and so Maggie can pay off her drug debts. (Maggie also had sex with the dealer who threatened to kill her: They’re now living together.) Jared tries his hand at bingo.

Several profanities (mainly the s-word, it appears) are censored. Uncensored curses include “a–,” “b–ch” and “h—.” We also hear the f-word stand-in “frigging,” “douchebag” and a pair of misuses of God’s name.