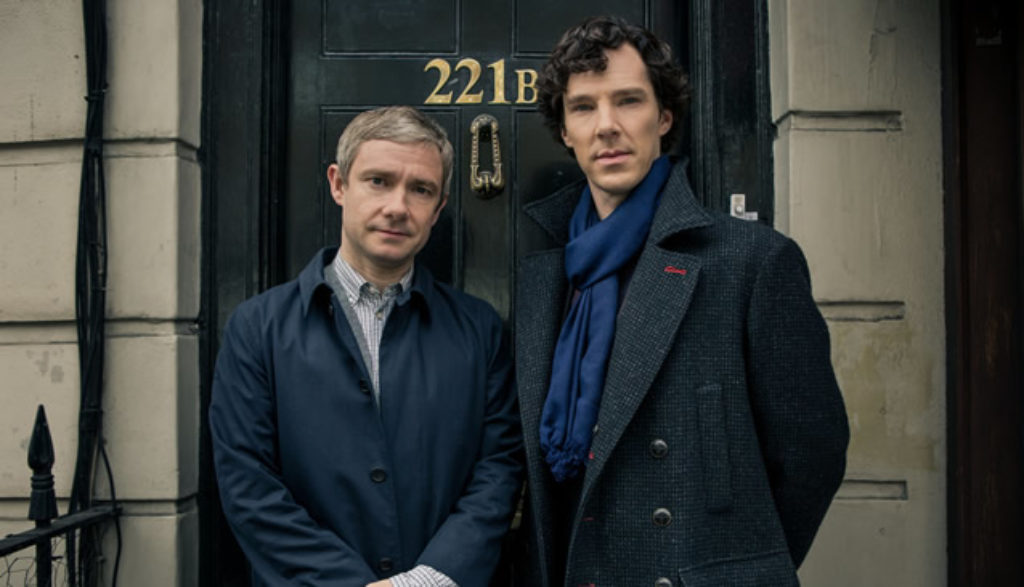 That might well be the motto of Sherlock, PBS’ freakishly popular import from the BBC. Starring the ever-busy Benedict Cumberbatch, this smart, stylish series lives where the Victorian era meets the Information Age, where Sherlock totes not just a magnifying glass, but a smartphone as well.

It’s not the first time Sherlock Holmes has been updated for a modern audience, of course. In fact, it’s turning into something of a cottage industry. Flip the telly over to CBS, and you’ll see another modern Holmes in full-on sleuth mode, sussing out clues stateside on Elementary. And, of course, there are the bawdy Sherlock Holmes movies starring Robert Downey Jr.

Key differences lie among the franchises. While the Downey flicks, for instance, may stay true to Doyle’s time period, they exude a 21st-century entertainment ethos, full of stunts and quips and busty women and massive explosions. They’re more Pirates of the Caribbean than The Hound of the Baskervilles. Despite its modern setting and the recent insertion of spycraft to Holmes’ traditional detective work, however, PBS’ Sherlock still feels older somehow—and more true to Arthur Conan Doyle’s literary roots.

Indeed, the show sports almost a dizzying array of references to Sherlock’s original, print-bound tales. Many episodes pull plots right from Doyle’s written adventures, twisting them, to be sure, but still paying humble homage to the originals. The very first episode in Series 1, “A Study in Pink,” is loosely based on “A Study in Scarlet.” Series 2 gives viewers “The Hounds of Baskerville,” a strange retelling of Holmes’ most famous adventure. It was followed by “The Reichenbach Fall,” a tribute to “The Final Problem,” in which Holmes and archnemesis Professor Moriarty supposedly plunge to their deaths off Switzerland’s Reichenbach Falls. Fans of the detective were probably not too surprised that Sherlock also appears to die in that episode—hopping off the roof of St. Bartholomew’s Hospital in front of a horrified Dr. Watson.

Doyle didn’t manage to finally kill off Holmes, though, and neither did the BBC. Sherlock, both the detective and the show—which boasts only three movie-length episodes in each of its standard mini-seasons—keeps coming back for more mystery. Mr. Holmes is always ready to face new challenges and evildoers while donning his deerstalker hat for obligatory interviews. Clearly this Sherlock knows how to play to the press, and he’s as brilliant and arrogant as ever. But he’s also a little more insecure than Doyle drew him—a little more human, as it were. Without a little vulnerability, after all, Sherlock Holmes is about as compelling as the Internet.

This new Sherlock is a little more loveable than the original, and that’s not just because of Cumberbatch’s understated charisma. He doesn’t do drugs, for instance, and has even given up his trademark pipe. A good thing, given that he has a hard enough time staying alive as it is.

Other concessions to 21st-century sensibilities are less welcome. Sherlock swears here—as do other characters around him. Doyle’s Holmes was prone to get into tricky scrapes on occasion, rarely were they so brutal or visceral as we see here. And while some speculate that Doyle’s Sherlock was Catholic, there’s no question that the BBC’s version is a dour atheist.

Sherlock and Watson are called upon to solve the death of a young man. The deceased was supposedly in Tibet, but he’s turned up dead in his car in front of his parents’ house—where he’s apparently been for a week. But while Sherlock solves that mystery in the show’s first 20 minutes (the boy apparently had some sort of seizure), Sherlock’s far more interested in a bust of Margaret Thatcher that had been stolen and shattered on the grieving parents’ front porch. Soon, he and Watson are caught up in a much more dangerous mystery involving Watson’s ex-assassin wife, Mary.

Two people die from gunshot wounds, with one given a prolonged, bloody death scene. Guns are pointed and fired elsewhere, too, with several faceless guards apparently getting killed in a military operation. Sherlock engages in hand-to-hand combat with someone, partly in an indoor pool where both he and the assailant nearly drown. In flashback, we see one of Mary’s old spy mates brutally tortured: He’s punched in the gut and hung from a ceiling. In close-ups, his bruised and bloodied face is quite visible. We also see the charred corpse of the dead man—really just a skeletonized body. A car blows up.

John Watson is having some sort of relationship with another woman—a secret he keeps from Mary. He texts the woman frequently and indicates to her that it’s been nice “to get to know you a little.” But whether the relationship has gone any farther is difficult to say. (The woman jokingly calls herself a “vampire.”) Sherlock deduces from a client that he enjoys wearing women’s lingerie. “I don’t,” the man corrects. “Just the bras.”

People drink wine and champagne. There are references to a drunk driver. When someone asks Sherlock whether he’s doing drugs, he says he’s merely experiencing a “natural high.” John and Mary ask Sherlock to be their new daughter’s godfather: Sherlock is dismissive of the concept, telling them that “God is a ludicrous fiction,” but he attends the christening ceremony (complete with priest and holy water) all the same. John and Mary joke that their new, wailing baby may be the devil and/or the Antichrist.

Characters say “a–,” “b–ch,” “b–tard” and “h—,” along with the British profanity “bloody.” Jesus’ name is abused twice, while God’s name is misused a dozen times.

Sherlock’s back—seemingly from the dead—and theories abound on how he faked his suicide. “Replays” involve images of dead bodies and fake gore; one posits that he and Moriarty are gay lovers. They’re not, but a fantasy sequence shows Sherlock leaning in to kiss the man. And when Watson returns to 221B Baker Street, he tells the housekeeper that he’s getting married. “So soon after Sherlock?” she says sincerely. “What’s his name?”

We see Sherlock get captured and tortured (beaten). We don’t see blows land, but we hear them (along with Sherlock’s cries) and see his back covered with bloody wounds. Blood runs out of the detective’s mouth. Watson beats up Holmes, too, leaving him with cuts on his face and a bloody nose. John is himself kidnapped and nearly set alight in a bonfire. We see a man put a gun in his mouth and pull the trigger. Holmes envisions a bomb blowing up Parliament.

Characters say British profanities like “b-llocks” (once), “b-gger” (once), “arse” (once) and “bloody” (four times), along with one each of “b‑‑tard,” “d‑‑n”, “c‑‑k” and “p‑‑‑.” There’s also an incomplete s-word, a play on a partial f-word and an obscene gesture. God’s name is misused nearly 20 times, and Jesus’ name is abused once. When somebody says “oh my god” upon seeing Sherlock, he quips, “Not quite.” Something leering is said about a nun. (Note that PBS edited some of the harshest profanity—the near-f-word and “c‑‑k”—for American audiences.)