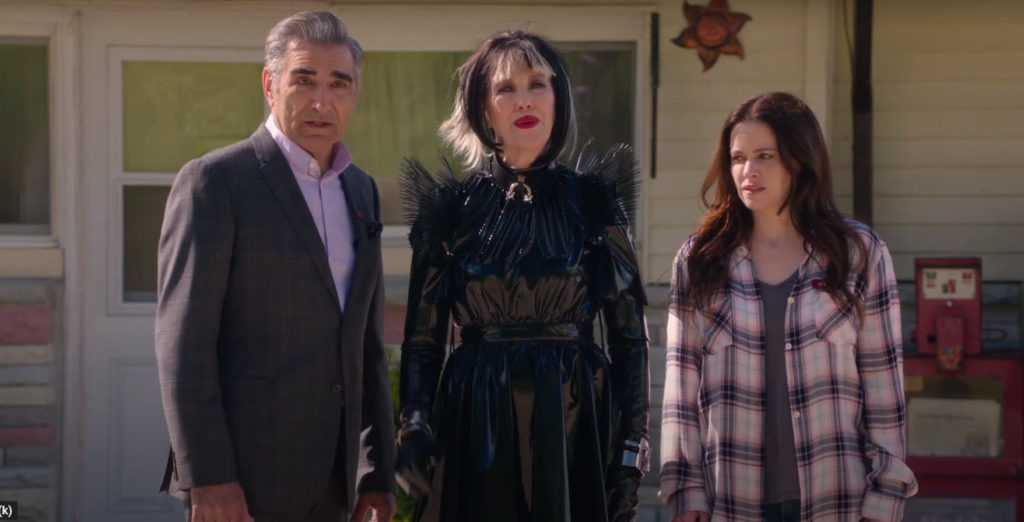 Johnny Rose and his family were once considered society’s elite. They had money, status and “stuff.” But after their business manager got caught up in a bunch of illegal financial schemes—which included failing to pay the Roses’ taxes—they were forced to give up all that stuff in order to pay for those taxes.

In fact, the only things the government didn’t take away from them were personal belongings that couldn’t be sold (such as the collection of wigs owned by Johnny’s wife, Moira) and a small town called Schitt’s Creek.

Johnny bought the town as a joke for his son, David, years ago, and it’s pretty gruesome—at least by their high standards (the “nightlife” is actually a bonfire with a keg, the nearest spa is just a hair salon and the only person in town with a medical degree is the veterinarian). But it’s also their saving grace since they can live there for next to nothing while they get back on their feet.

Abandoned by all their friends and, as Moira laments, “stripped of every morsel of pleasure,” the Roses pile into two rooms of the Schitt’s Creek Motel. But living in the close quarters of the “vomit-soaked dump” actually brings them together in more ways than one.

Without any “stuff” to distract them, the family bonds over their shared miserable experience. They pursue dreams they didn’t realize they had, make friends with people who care more about their well-being than their money and, hey, actually get to know one another. And surprisingly, they each begin to discover that maybe Schitt’s Creek isn’t such a bad place to live after all.

But hey, if they decide that the town is still just too quaint for their liking, homelessness is always on the table.

However, despite the show’s obvious appeal, it comes with a lot of content concerns for families.

There’s the fact that even though the Roses eventually warm up to the town and its residents, they sometimes just aren’t the kindest people. Alexis, their daughter, toys around with the emotions of several of the town’s bachelors. David insults many of the business owners, saying their products and services don’t measure up to his luxurious tastes. And Johnny and Moira, while trying to make the best of poor situation, can’t seem to stop butting heads with the town’s mayor, Roland Schitt, and his wife Jocelyn (whom the Roses assume are naïve, but are really just too polite to say how they really feel).

The show has also been lauded for its representation of the LGBTQ community (winning a GLAAD media award). David has sexual relationships with both men and women on the show, there is an episode that focuses on the coming out of Patrick (David’s eventual partner), and the final episode shows the two men getting married.

And while visual sexual content is kept to a minimum (we see kissing, some revealing outfits and the occasional couple waking up in bed together), sex is still heavily discussed on the show. Language is also an issue. In addition to the very name of the show evoking a certain profanity, we hear pretty much every bad word in the book  (including the f-word).Schitt’s Creek was created by a family and is about a family, but that doesn’t mean it’s appropriate for your family.

When it rains on David’s wedding day, his family and friends scramble to find an indoor venue to suit his eccentric tastes.

Two men get married and we see them kiss several times. David receives a “happy ending” from a masseuse and mistakenly believes his fiancé paid for the treatment. The town sign shows Johnny bent over in a skirt with Moira standing behind him in a sexual manner. A woman implies that she has a sexual relationship with another woman. David wears a skirt-suit for his wedding. Alexis wears a revealing dress and we also see her in a bathrobe. Moira dresses in a pope-like outfit to officiate her son’s wedding.

A man references a pill he took to calm down. People drink champagne. Roland makes a joke about Johnny suddenly dying. The f-word is heard several times, as well as “a–” and a few misuses of God’s name.