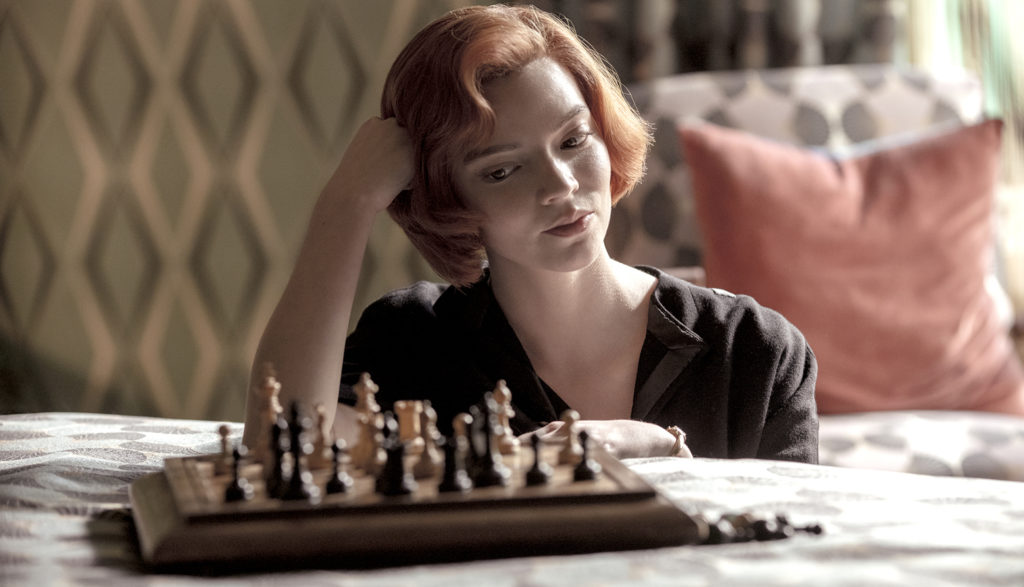 When asked what she would say to those in the Chess Federation who believe she is too “glamorous” to be taken seriously as a chess player, Beth Harmon simply states that she finds it “much easier to play chess without the burden of an Adam’s apple.”

When she was 9 years old, a recently orphaned Beth discovered chess for the first time, learning how to play from the janitor, Mr. Shaibel, at Methuen orphanage. Mr. Shaibel quickly realized that Beth was a prodigy at the game. He arranged for her to play at the local high school, where she brutally took down 12 players at once in a “simultaneous.”

Unfortunately, Beth’s secret to success was the little green pills that Methuen gave the girls every day. These mood-stabilizing “vitamins” were actually tranquilizers (unregulated by state laws at the time) that helped Beth to focus her mind on the game. And when the orphanage’s matron discovered the truth, she banned Beth from playing the game, believing it to be just as dangerous as the drug itself.

Fast forward six years and Beth gets adopted by Alma and Allston Wheatley. Stuck in an unhappy marriage and addicted to those little green pills herself, Alma and her husband hope that Beth will somehow lift Alma’s spirit (it’s briefly mentioned that they lost their own daughter somehow).

Unfortunately, Alma’s addiction to the pills and alcoholism  prevents her from really becoming invested in Beth’s life. She sees Beth as a financial burden and can’t understand why such a young girl isn’t more interested in socializing with people her own age.

But Beth doesn’t care about social functions. Now that she’s free of Methuen’s strict rules (and back on her diet of pills), she wants to play chess again—this time at a competitive level. So, she participates in a local chess tournament, taking on some of the best players in the state, and wins.

Seeing the financial prospects (Beth’s first win brings home $100), Alma agrees to stop complaining about how much Beth is costing her and to actually try to be a mother. In return, Beth can play as much chess as she wants—with Alma calling in “sick” to Beth’s school—and she can use her winnings to finally buy all the expensive, glamorous clothes she’s envied on other girls for so long.

A bond is forged, and the two women set out together to take the 1960s chess world by storm.

Beth Harmon is what legendary American chess player Bobby Fischer might have been if Bobby Fischer had been a girl. They certainly had many similarities. Both became chess Grandmasters at a young age. Both had a famous rivalry with a Soviet Grandmaster. And both were rumored to have struggled with substance abuse. Of course, that’s where the similarities end: Beth Harmon (unlike Bobby Fischer) is fictional.

But fictional or not, the content concerns in The Queen’s Gambit are very real. Beth gets addicted to tranquilizers at the tender age of 9 after she and the other girls at Methuen Orphanage are given a daily dose of the mood-stabilizing “vitamin.” As she gets older, this leads to a dependency on alcohol as well. And throughout the show, she goes back and forth between months-long benders and being sober, struggling to keep her addiction at bay.

Language is another factor that viewers will want to keep in mind. Almost immediately upon being admitted to Methuen, Beth hears the phrase “f—ing c–ks—er.” This type of language is consistent throughout the show and also leads to an age-inappropriate conversation with an older girl at Methuen about what the phrase actually means. (And although we don’t see any nudity in The Queen’s Gambit, Beth finds herself curious about couples making out and groping and eventually has sex with several men and even one woman.)

[Spoiler Warning] We should also consider the disturbing history of how Beth came to be an orphan not just once, but twice. Her biological mother went tragically insane, attempting to kill herself and young Beth in a car wreck. Beth survived to be adopted by Alma, but Alma was constantly ill and struggled with substance abuse herself. She eventually died of hepatitis (allegedly), leaving Beth at the whim of an adoptive father who, like her biological father, wanted nothing to do with her. So although The Queen’s Gambit tells an intriguing story, watching it can be a bit of a gambit itself.

After losing her mother in a car wreck, Beth Harmon is taken to Methuen Orphanage, where she learns how to play chess from Mr. Shaibel.

We see a woman start to remove her dress after climbing out of a tub soaking wet. We see a girl in a bath towel. It is implied two people had sex. A girl explains what oral sex is to another girl. Beth looks at anatomical drawings of nude people in a health textbook. A teenage couple makes out. A woman wears a thin slip dress. A woman says her husband might not be the father of her child. A young girl removes her dress and we see her undergarments.

We see the wreckage of two vehicles with a bloody body covered by a white sheet. Beth’s mother tells her to close her eyes just before the wreck, indicating that she crashed the car on purpose. A girl falls off a chair and hits her head on the ground. Another girl is dragged by her arm and we learn she had her mouth washed out with soap.

An adult Beth takes several pills with alcohol. Girls at Methuen are given tranquilizers every day. Beth and Jolene (another orphan) stockpile these and take several at once to get themselves high. (Beth hallucinates a chess board on her ceiling when she does this.) Jolene warns her not to get addicted to the feeling of the pills, but Beth does anyway. This results in her taking handfuls of pills at a time and stealing a large jar filled with the pills after Methuen stops administering them. A man drinks whiskey from a flask. Some teenage boys smoke cigarettes. A man tells several young students to avoid tobacco and alcohol.

Someone tries to explain the concepts of death and heaven to Beth. Someone also says that prayer and faith can lift you high when grief brings you low. There is a chapel in the orphanage. People sing “Nearer My God to Thee.” Students watch a movie about a Roman soldier who refuses to renounce Christ.

In a flashback, Beth’s dad tries to convince her mom to return home, but she refuses, so he leaves them both. Jolene complains when another girl gets adopted and says that she is too old and “too black” to get adopted. She also calls Beth a “cracker.” Beth is told that girls shouldn’t play chess. Students watch a video that explains menstrual cycles. Beth skips class to play chess with Mr. Shaibel and ignores teachers in order to read books about chess. She is also rude when she loses at chess and gloats when she wins. Someone picks a lock to steal drugs from a pharmacy.