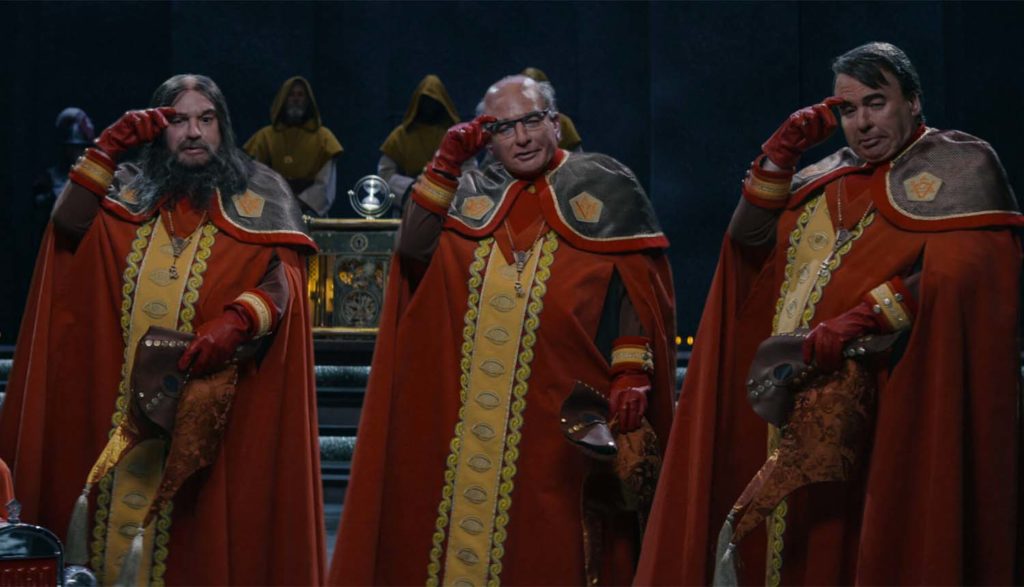 In 1347, five learned men realized that the bubonic plague, called the Black Death, was caused by fleas on rats. However, we’re told, the Church labeled these men heretics since they believed the plague was actually God’s punishment.

Now, what makes the Pentaverate different from, say, the Illuminati, the Freemasons or any other secret society? They’re nice.

Well, that’s not exactly true. They’re nice in the sense that they’ve tried to better humankind since their formation. Allegedly The Pentaverate—which has always consisted of five people, though those people obviously have changed over the centuries—was responsible for the polio vaccine, Gutenberg’s printing press and the ball bearing (without which we wouldn’t have any modern form of transportation).

But the society’s benevolence can be overshadowed by its secretiveness. Its greatest oath is “The Pentaverate must never be exposed.” And its members take it pretty seriously. They’ll put your head on a pike if you betray it. Even the five leaders of the organization—the Pentaverate themselves—carry cyanide pills in keys hung around their necks in case their society ever falls into nefarious hands.

But for now, they’ll busy themselves with the task of global warming—ending it, not causing it.

The Pentaverate Must Be Exposed

What the Pentaverate doesn’t know is that there’s a traitor in their midst (several, in fact).

Ken Scarborough is a Canadian reporter on his last leg. All he’s ever wanted to do was be a voice for the common man with his stories. Unfortunately, he’s just too nice to provide the hard-hitting news that his producer requires.

So, he poses as a Liechtenstein Guard (the Pentaverate equivalent of the Vatican’s Swiss Guard) and infiltrates the Pentaverate. His mission: to do the one thing every member has sworn not to do—expose it.

Little does Ken know that he isn’t the only one trying to bring down the Pentaverate.

It turns out someone is killing off members of the Pentaverate and trying to sell their supercomputer (the one capable of solving just about every problem the world has ever faced).

Will Ken uphold his title as a nice guy and save the Pentaverate—and the world, by extension—from disaster? Or will he expose the secret society and all its corruption?

Creator, writer and star of Netflix’s The Pentaverate is Mike Myers. And there’s a lot to expose here.

I do want to give a small nod to the creativity. Myers pays homage to his previous films with character cameos and rewrites of some of his most famous lines. The entire series serves as a commentary on how the entire world has abused the processing power of computers by using the vault of information available at our fingertips to obsess over social media challenges and blindly follow conspiracy theories. It also lays into the media for “distorting” the news. And viewers are encouraged to do the right thing, even when it’s not the easiest thing.

But anyone brave enough to explore the show will find a lot of content to wade through.

First is the language—the f-word being most prevalent. Ken’s sidekick, Reilly, comments on this, asking why there’s so much cursing. To prove their point, a Netflix executive comes on screen and edits out the profanity to show what a scene would look (and sound) like without the swear words. The result is a pornographic-sounding confrontation between Myers’ character and another man. But this doesn’t justify the onslaught of swearing. Reilly was absolutely right when she said it was weird there were so many curse words.

Next up, that sexual content I just mentioned. Myers exposes himself (and other actors) completely. Once again, a Netflix executive tries to edit this out with disastrous results. Between that and the plethora of crude jokes throughout the series, nothing is left to the imagination.

Then there’s the violence. It seems almost pointless to bring this up given the previous two paragraphs, but suffice it to say that nothing is off the table. A surprising number of bloody deaths take place on (and sometimes off) screen.

Continuing on to the cult-like initiation rituals, the suicide pact every member agrees to and the symbols displayed around the Pentaverate headquarters, the organization also gives off Illuminati vibes. And while the show doesn’t spend a lot of time commenting on religion, the only reason the Pentaverate exists is because Christians labeled them as heretics in the fourteenth century.

Finally, toilet humor. This shouldn’t be anything of a surprise to fans of Myers’ other films. Even the relatively family-friendly Shrek abounded in the filth. And unfortunately, that’s still the case in The Pentaverate.

So, if you were hoping for the Mike Myers of Shrek, think again. Because The Pentaverate is more like Austin Powers on steroids.

When Ken is told to find a big, breaking news story, he sets out to expose the Pentaverate, a secret society.

Cult-like symbols grace the Pentaverate headquarters. Members wear robes and plague-masks and chant during rituals. We learn that MENTOR, the Pentaverate’s supercomputer, somehow contains a human soul. A real-life sasquatch serves as a guard dog for the Pentaverate.

The Pentaverate fakes a man’s death (a broken neck) in order to kidnap him. They then tell him he has a choice to either join them or die by cyanide. (He chooses to join them). Another member of the Pentaverate says they faked his death in an “unprovoked shark attack.” A video shows a woman getting injured from a gun’s backfire. The Pentaverate knocks out several people with gas.

We hear about an internet trend called the “Kiss the Star” challenge, where people try to lay lips on their own rectums. (We see two men attempt this, one of whom is nude.) A man in form-fitting underwear and lots of body paint contorts his body during a ritual. A conspiracy theorist states that a secret society takes Christian men and forces them to have ritual gay sex in coffins while members dance naked as a “sacrifice” to the online meme “Momo.” A man says he is in a “polyamorous relationship with two life-sized companion dolls.” A man references sodomy at a nudist colony. MENTOR calls out a man for ogling a woman. There are multiple references and jokes about sex and male and female genitals.

When the Pentaverate kidnaps a Black man, he believes it is a hate crime since they are an organization of primarily white men. However, he soon learns they are trying to diversify. A woman says Ken reminds her of her dad except that he doesn’t drink and didn’t leave her mom for another woman. A sasquatch defecates indoors. We see a man on a toilet, his thighs exposed and hear him flatulating. A man says his friend has a “prolapsed anus.” Later, he says he has drugs hidden in his rectum. We hear many different conspiracy theories.