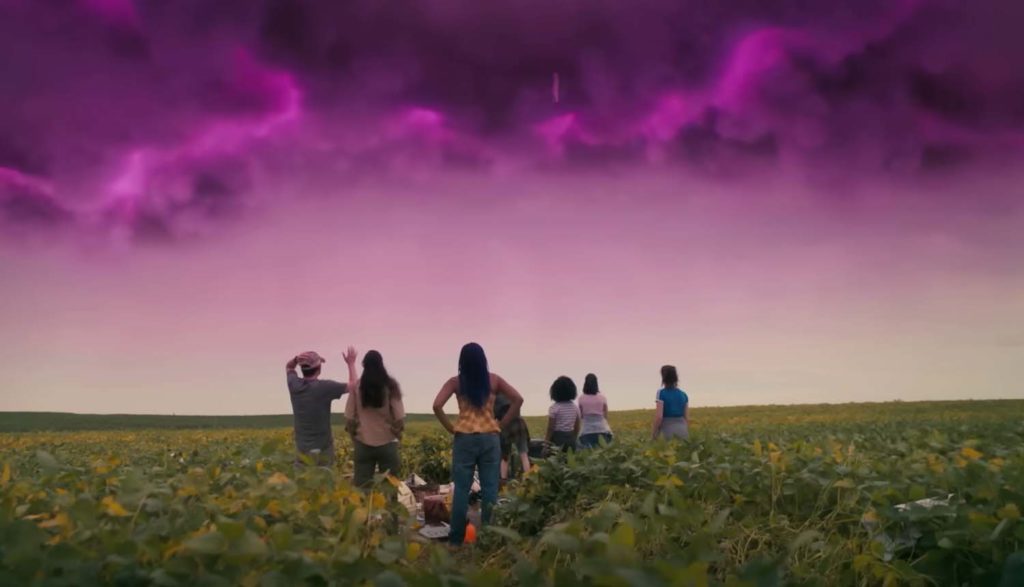 These days, parents probably wouldn’t let their 12-year-old girls wander the streets all by themselves at 4 a.m. But in 1988—in this section of Ohio, at least—it was pretty common.

Sure, Erin’s mom had some misgivings about their beloved daughter taking up a paper route. And had she thought about Erin’s first day on the job being Nov. 1 (aka the day after Halloween, aka “hell day,” at least for paper deliverers), she might’ve suggested that Erin postpone her new career ‘til, say, next spring.

But Erin wanted this. She begged her protective mother, insisting that she was ready. And after all, how bad could it be?

Hot Off the Presses—Tomorrow’s News Today

It should’ve gone just fine. Oh, sure, Erin deals with her share of rambunctious ruffians who’d clearly had too much sugar (or other substances) during the night. But she finds a new group of friends—paper girls, like herself—to help her with that. Tech-savvy Tiff lends her a handy walkie talkie. Streetwise Cam can stare down many a troublemaking teen. And if that isn’t enough? Smart, rich KJ knows how to handle her field hockey stick mighty effectively, thanks.

But hockey sticks and steely stares only go so far when the sky turns purple, you’re whisked straight out of 1988 and plunked down in 2019. When time itself becomes as pliable and tearable as a Monday morning edition, and when some warring time-travelers from the future want to take you out of the time stream permanently, even the most resourceful paper girls will need some help to stay alive and sane.

Maybe their future selves can chip in—even if it doesn’t look like they’re doing so hot, either.

Amazon Prime’s Paper Girls is based on a comic book series of the same name by Brian Vaughan (and illustrated by Cliff Chiang). The original print version won loads of awards, and Vox called it “the next great American comic book.”

I’ve not read the original comics. But if it’s as praiseworthy as some say, Amazon’s live-action show falls well short of its source.

Paper Girls feels like a Stranger Things wannabe, and it brings many of the trappings from the popular Netflix series without even changing the wrapping: the 1980s setting, the coming-of-age characters, the sci-fi trappings. Even the story’s setting (Ohio) is just a drive across the state line from Hawkins, Indiana.

But if Stranger Things is the Godzilla of 1980s nostalgia catnip (and whoever thought that would be its very own genre?), Paper Girls is Gamera (a gigantic turtle with jet engines on the back of its shell).

From the stilted dialogue to the disco-flavored costumes of the future, Paper Girls dances on the edge of camp. Stylistically, that gives Paper Girls a more innocent vibe than you’d expect. In fact, the show can sometimes feel like a 1980s production itself—something you might see on Saturday morning or weekday afternoons.

If Amazon had fully embraced that vibe—crafted something fun and creepy and silly and clean—it might’ve worked better. Instead, the show then bikes off its own well-lit streets and peddles straight into a forest of content.

As the sky in Paper Girls turns purple sometimes, so the dialogue turns blue, too. Most of Cam’s vocabulary seems cribbed straight from a Martin Scorsese flick, and many characters lob their own f- and s-words straight at viewers. (Cam’s already a committed smoker, as well.) People can die in terrible, bloody ways. Love and attraction—including between people of the same sex—are in the offing, too.

Admittedly, a lot of those problems surely come straight from the comics. This show may focus on 12-year-olds, but it’s not made for them.

Most parents, of course, wouldn’t be comfortable with their 12-year-old girls wandering city streets at 4 a.m. But some might not know that their kids are wandering down some dicey digital roads, too.

Erin begins her career as a paper carrier on the worst day possible: Nov. 1, when Halloween troublemakers are still roaming the streets. She meets three other girls who also have paper routes, and that provides all of them with a bit of safety. But when a ne’er-do-well knocks Erin down and snatches her walkie-talkie, and when the girls pursue the culprit and his friend to a nearby construction project, the morning takes an out-of-this-world turn.

The sky turns purple, and the girls seem to find themselves in a neighborhood where everyone’s vanished. They speculate on what might be happening—everything from aliens to Russians to nuclear war—and retreat to the deserted house of another paper girl named Cam. Cam pulls out and brandishes a gun. She says the gun will help protect them, but the plan has holes in it—and soon, so does Erin. As Cam waves the pistol around, it goes off, and a slug goes into Erin’s gut. We see quite a bit of blood and Erin is, obviously, badly injured.

On their way to the hospital things get much worse. They find themselves in the middle of a shootout with strangely dressed people who seem to be at war with one another. People are shot and killed: One woman (apparently a faction leader) finishes off someone with a near point-blank shot to his head. Another paper girl, KJ, hits someone in the face with a hockey stick—killing or knocking the guy out and spraying blood on KJ’s face. Fireworks are used as a weapon. The girls prepare to fight a couple of teenage boys.

Bugs crawl all over an injured person’s abdomen. We hear more flippant references to killing and murder. Someone tells a story about a naked guy. Some of the early morning revelers the paper girls deal with have clearly been drinking. (Cam snidely says that teen boys think they’re “so tough” after a couple of beers.) We hear about how a couple of bullies poured cans of beer on Cam. “Total waste of good beer,” she says.

A man insults Erin (who is of Chinese descent), calling her a derogatory name (that’s even inaccurate in its offensiveness) and threatening the girl with a baseball bat. Cam shows her own bigoted upbringing: “My dad says you own everything,” she tells Jewish KJ. (We also see KJ look over a dress meant for her Bat Mitzvah.)