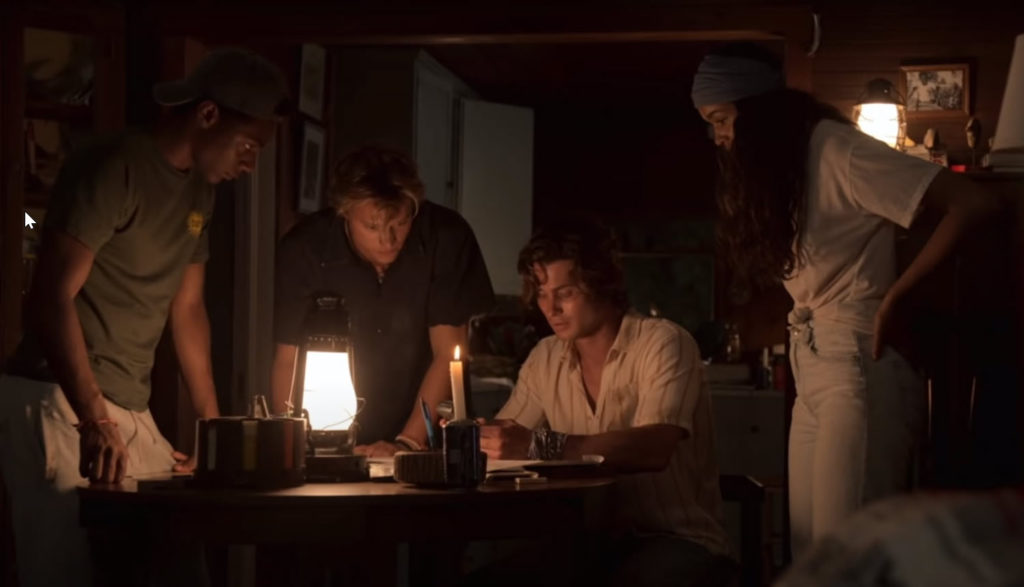 Arrgh! Nothin’ like buried treasure to make a pandemic go down easier, me mateys.

So say the Pogues at least, the teen scalawags from Outer Banks who have a special interest in all kinds of booty, if y’get my meaning. True, these five lads and lasses don’t seem get the notion of social distancin’. Masks? Why these grog blossoms barely wear clothes! But like true buccaneers, they have an eye for loot, a nose for trouble and a taste for grog.

And shiver-me-timbers, they’re bound determined to find those doubloons, no matter who they gotta keelhaul to get it.

And that, me hearties, includes the audience.

Netflix’s Outer Banks introduces us to four teens who belong to the North Carolina island’s Pogues class, aka its poor, working Joes and Janes. Not that these youth work, mind you. Sure, John B. seems to have a job for one of the Kooks (the well-moneyed denizens on the north side of the island), but he doesn’t seem to be there much. Mostly, he just tools around through the waters and swamps of the island with his trim, well-tanned crew: Troublemaking surfer J.J.; brilliant future college student Pope; beautiful Kook-turned-Pogue Kiara.

All of them are apparently in high school, but it’s summer now. And besides, none seem to have parents who care much about whether they go to class, or come home, or reek of beer most of the day. John B.’s own pops disappeared some time ago looking for an ancient shipwreck, and his official guardian took off sometime later, leaving the kid alone in the beach house. Helicopter parents? Yeah, the adult role models here are more like UFOs: mysterious, rare and arguably nonexistent.

But when John B. and his friends literally run into a different sort of shipwreck, it sends them and Kook Sarah (daughter of the rich dude who John B. supposedly works for) on a treasure hunt—a hunt filled with drug dealers, crooked cops, long-hidden secrets, dead bodies and armored scorpion-shark hybrids from space.

OK, I made the last one up. They would’ve made the show a little more watchable, though.

Since its April 15 release in the middle of the coronavirus quarantine, Outer Banks has become one of Netflix’s most-streamed shows. But let’s not imagine that it’s because of its stellar writing or tremendous acting. It’s because of, in Entertainment Weekly’s words, “the hot teens.”

EW’s Sydney Bucksbaum listed “eye candy” as the first of five reasons why Outer Banks should be the next show readers should binge. Noting that all the actors playing these under-18 characters are actually in their 20s, she encouraged folks,  “Go ahead and enjoy, guilt-free, the sight of them all constantly stripping down to jump in the water or just lounge around half-naked for no reason at all other than to show off their toned and bronzed physiques.” Essentially, Bucksbaum is encouraging ogling via chronological technicality.

And it’s not just that the youth living in the Outer Banks lose most of their clothes whenever someone sneezes. They’re the types of folks who’d never even cover their mouths. They’re edgy like that.

Oh, Netflix tries to position our wayward Pogues as just fun-loving roustabouts—the good guys to the pompous Kooks’ preppy villainy. And yeah, the Kooks are plenty pompous, and by comparison more evil. But our center-stage Pogues—the folks who we’re supposed to be rooting to not die, I think—start their drinking day as soon as they fall out of bed, steal stuff, taunt the law and make fun of pretty much anyone who isn’t, well, them.

Oh, they’re not all bad. Kiara frets about the environment. Pope is smart. John B. misses his dad, and that’s nice. He also gets on J.J.’s case when, in the first episode, the latter steals a gun and a wad of cash from an active crime scene. Give this man a key to the city.

And all of this this information, admittedly, comes from only a partial viewing of the show. One hopes that these teens—children, in the eyes of the law—will learn some lessons before the show winds down. If they don’t die, that is.

Still, for those who think that teens should aspire to be something more than good-looking, Outer Banks probably doesn’t have the sorts of role models you’re looking for.

One final irony: Because of the show’s language, Netflix brands this show TV-MA—the equivalent of a cinematic R-rating and one that stresses the show is meant for adults. And yet it’s labeled as a “teen drama” and a “coming-of-age story.” What does it mean when a streaming service markets a show to an audience that, technically, is too young to watch it? Seems like Outer Banks is only fit for Davy Jones’ Locker.

After a vicious hurricane rips through the island, John B. and his friends discover a sunken boat. John B. swipes a hotel key from the waterlogged vessel, which leads him and his friends to a safe filled with cash and a loaded handgun. But other people have interest in the hotel stash, too. The local constable finds pictures of a sunken treasure ship in the safe as well. And some ne’er-do-well, gun-toting ruffians want one of those wrecks for themselves—and are apparently willing to kill anyone who might get in their way.

John B. and his friends wear as little as they possibly can. The guys go shirtless. The women rarely don anything more modest than bikini tops and short-shorts. (They shed the latter with some frequency, too.) All these teens seem to drink pretty constantly, as well: Rarely are they seen without a bottle or can of beer in their hands, and they sometimes spray beer from kegs into each other’s mouths. J.J. John B.’s best friend, whom he describes as a “mild kleptomaniac and future tax cheat,” appears to smoke cigarettes and vape; and a law enforcement officer finds what might be the leavings of a marijuana joint in John. B.’s unsupervised pad.

J.J. steals a wad of cash and a gun from a hotel room. (The police who show up minutes later also help themselves to some cash.) John B. swipes some scuba equipment from his employer and disobeys law enforcement. Pope (another friend of John B.) disobeys his dad to run off with his friends on a dangerous escapade. They all squat in a mansion (undergoing some reconstruction work) and taunt a security guard who chases them. “They don’t pay you enough, bro!” J.J. shouts as he flings a beer can at the pursuing guard. Pope and John B. surf during a hurricane.