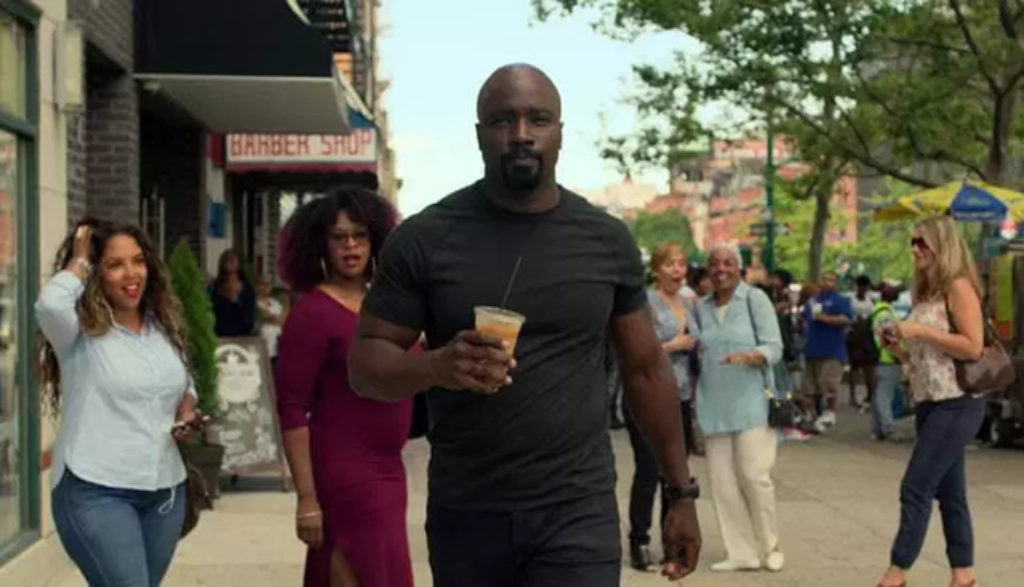 “Everyone has a gun, no one has a father,” Luke Cage says.

The streets of Harlem are indeed dangerous in Netflix’s Luke Cage. There’s a lot of bad here and precious few role models to make things better. More hoodlums pack heat than carry wallets. Neighborhood racketeers swap weapons for money, and sometimes the deals turn bloody. Bullets can be an all-too-common danger on some of this New York neighborhood’s roughest streets: Take a wrong turn, run into the wrong guy, work for the wrong man, and you might just wind up with a terminal case of lead poisoning.

Unless, of course, you’re immune to bullets.

Enter Luke Cage, former convict and current hero of Harlem. He doesn’t turn green when he’s angry or fling a fancy shield. And it’s not like he can afford a Quinjet: He can barely afford his rent. He’s just a mostly regular guy, really, trying to figure out how to do right by his community and still pay his bills.

“Just because you’re a woke superhero doesn’t mean you have to be a broke superhero,” Luke’s friend and mentor tells him.

Not that Luke’s in the hero business alone. Misty Knight, a New York City Police detective, continues to fight the good fight despite having lost an arm (in the first season of Netflix’s The Defenders). Nurse Claire Temple has aided plenty of Netflix superheroes, but these days she’s only sleeping with Luke. His pals at Pops barbershop help him track down the bad guys sometimes, and his young friend D.W. might as well be working as Luke’s hype man.

Still when the bullets start to fly, Luke’s loathe to let anyone else do the dirty work. The fact that Luke’s skin is pert near impenetrable (and the muscles underneath work pretty well, too) comes in handy in Harlem, where he battles various underworld crime lords, drug dealers, gun runners and the occasional super-powered villain. Season 2’s big bad is John “Bushmaster” McIver, a kingpin who seems to have Luke’s talent for dealing with bullets and has plenty of hand-to-hand skills as well.

But he’s not Luke’s only enemy. Sneaky and shady nightclub owner Mariah Dillard continues to make life difficult for Luke and his supporting cast. Drug dealers are distributing a brand of heroin made under Luke’s own name—a definite no-no in Luke’s eyes. And then there’s the mysterious presence of Luke’s own father. As a preacher, he’s a leader in his own right. But he and his son have had a falling out, and, at least early on, a reconciliation seems unlikely.

Finally, we have Luke’s own curious battle with celebrity, posing for selfies and signing autographs even as he battles crime. It’s difficult to keep a low profile when someone’s designed an app to follow your every move, y’know?

Getting Under the Skin

While Marvel’s flashy, glamor-boy superheroes dominate the big screen in PG-13 popcorn romps, Netflix has spent the last couple of years bringing some of Marvel’s grittier characters to life on the small one.

Matt Murdock (Daredevil), Jessica Jones, Danny Rand (Iron Fist) and Luke Cage have special powers, sure. But they still work semi-regular jobs. They struggle with their calling. They drink. They fight. They sometimes run away. Their gifts may be super, but that doesn’t make them heroes. They have to choose that path. And while they may choose it one day, they might fall down on the job (and in Jessica Jones’s case, fall down drunk) the next.

Luke Cage is more prototypically heroic than his one-time lover, Jessica. He’s thoughtful. He wants to help the people around him. He holds himself to a stricter moral code than some. He doesn’t get sidetracked by booze or alcohol like Jessica, and he doesn’t have the anger issues of Daredevil. As he tells his dad, he’s “saving souls my way, walking the righteous path on my own terms.”

But while Luke may be in some respects the most admirable of Netflix’s superheroes, his show is still plenty problematic.

Netflix has always been free about shedding, spurting and splaying blood in its super-violent superhero stories. There’s plenty of that here. Luke may hold himself relatively in check when it comes to violence, but that restraint does not extend to his sexual habits.

He’ll take a roll in the hay without much provocation (we saw that same tendency with Jessica Jones, too), and the bedroom action here doesn’t stop at mere suggestion. We see breast nudity, thong-clad bottoms and explicit movements. And while Luke doesn’t swear (much), many other characters do. The s-word and n-word are both used frequently (as are other less jarring profanities). Alcohol is part of this superhero stew, as well.

Luke has a new challenge to deal with: his own celebrity. People want to take selfies with him. His young cohort, D.W., posts videos of him in action. And while Luke’s not thrilled with the attention, he would like to make enough money to get himself and girlfriend Claire out of Claire’s grandmother’s apartment. “Cops get paid, so do firemen,” Claire tells him. “Why should you be any different?”

But he’s dealing with other enemies, too, including newly introduced John “Bushmaster” McIver, crooked businesswoman Mariah Dillard (who has a sexual relationship with her much younger nephew, “Shades” Alvarez) and perhaps even his own estranged father.

Luke’s dad, a pastor, practices a sermon to his hall mirror, where he casts a bit of doubt on Luke’s heroism. “Harlem’s worship of Luke Cage has reached golden calf proportions,” he intones, saying that people are considering him the neighborhood’s own version of Jesus. “Does he serve the Lord, or does he serve himself?”

“One man cannot do it by himself, no matter how good, no matter how strong,” the practicing pastor tells his imaginary congregation. “And believe me, Luke Cage is nothing but a man. And there’s a reason we don’t worship men. Because we’re weak, subject to temptation. Ego. Vainglorious. Spiteful.”

When the two meet on the street, Luke makes no secret of his distaste for his dad, telling the reverend that he’s saving souls “my own way.”

We see Mariah sensually suck Shades’ thumb to antagonize a waiter. The two kiss and engage in foreplay, too. Luke and Claire dance erotically together before they also fall in bed. We see some movement-filled lovemaking (and a brief glimpse of Luke’s exposed rear). In a drug den, several women manufacturing heroin are clothed only in bras and panties. We hear some sexual allusions. Mariah encourages a newly hired employee to sexually entice of some of her club’s customers. (How far Mariah expects her to go is not explicitly stated.)

A man has an eye gouged out before the knife cuts across the victim’s face; he has his other eye cut, too. (The victim apparently does not survive.) Luke walks into the back of a truck which is then blown up. He walks out of the flaming wreckage (“Ouch,” he says), is shot with a special “Judas bullet” and eventually plunks his assailant on the head (knocking him out). He and Bushmaster are both shot several times, apparently without any ill effects. He and Bushmaster also beat up lots of people. Other fights take place as well. In flashback, someone’s blood spatters over Mariah during an execution.

Characters drink whiskey, vodka and martinis. We hear that someone smuggles cocaine and heroin in couches. Characters use the s-word about a dozen times. Other vulgarities and slurs include “a–,” “b–tard,” “d–n,” “h—“, “p—y” and about eight uses of the n-word. Luke himself stuffs a handful of bills into Pops’ swear jar. God’s name is misused once.

Luke is working two jobs and still struggling to pay rent. But soon he’s swept up in a more difficult matter. Chico, a kid he sees all the time at the barbershop where he works, gets mixed up in a gun deal gone wrong. Now Harlem gun dealer Cottonmouth is determined to find him and the money he took.

Chico’s associate, Shameek, was the mastermind behind crashing the deal: He shoots and kills several people, including a guy who was working with him and Chico. But Cottonmouth catches up with Shameek, and the Harlem kingpin beats him to death with his bare hands. (Blood spatters Cottonmouth’s face and white dress shirt; his blood-drenched corpse is later found, with cops saying it looks like he was hit by a truck.)

Luke stops a shakedown. One man punches him in his face, breaking his fist in the process. (A bone smashes through the assailant’s skin, blood spurting out of the open wound.) Luke also stops a baseball bat with his forearm (the bat splinters into pieces), grabs the barrel of a gun and stops the bullet (leaving the bullet and a little gun residue in his palm). We see a flashback to Luke getting beaten in prison. Blood splashes across car windows.

Characters visit a strip club, where we see several women dancing, gyrating and giving lap dances, wearing just thongs and pasties. Luke has sex with a woman in a graphic scene in their underwear involving explicit movements and groping. They gyrate on the bed before the camera leaves. When the camera returns, both are half-naked in bed; the woman gets up to leave, and viewers see her exposed breasts in shadows. Elsewhere, double entendres and suggestive come-ons are uttered. Backsides get ogled.

People drink and are served champagne and other glasses of alcohol, and someone mentions smoking cigarettes. Characters say the s-word about 15 times and “n-gger” another five. We also hear “b–ch,” “a–,” “d–n” (once paired with “God”) and “crap” (which characters argue about whether it counts as a curse or not.) Someone vomits. People lie.