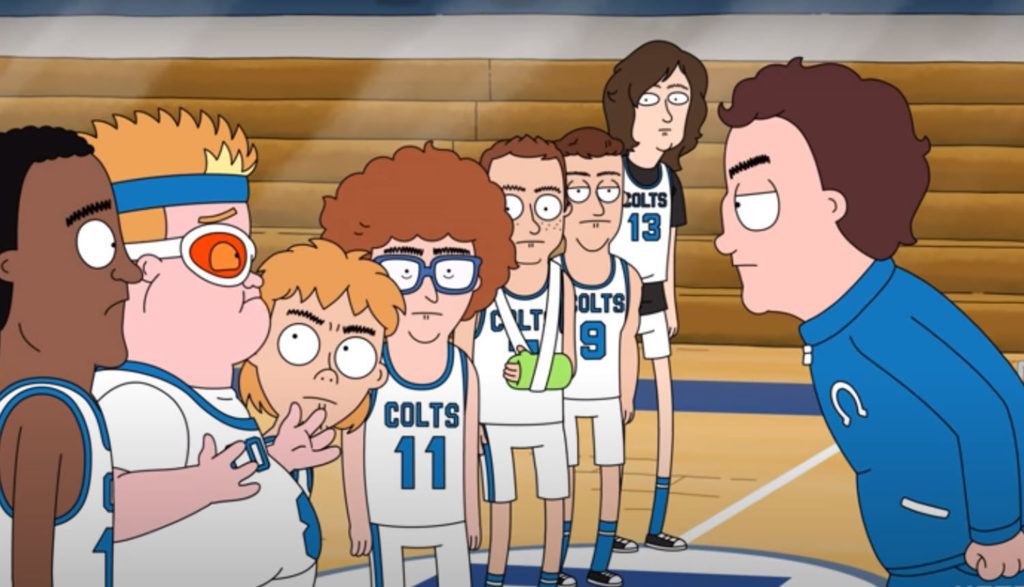 “If you put your effort and concentration into playing to your potential, to be the best that you can be, I don’t care what the scoreboard says at the end of the game. In my book, we’re gonna be winners.”

That quote is from 1986’s Hoosiers, the classic, Oscar-nominated basketball drama starring Gene Hackman. It has nothing to do with Hoops, Netflix’s new animated comedy—other than Hoops, too, is about basketball and also starts with the letter “H.”

But I try to find something good to say in a given review. And trust me: Hoops, without a little outside help, offers precious few opportunities for that.

Someday far, far in the future.

Ben hopes to bring that day a little closer. For while he calls his team a “family,” he’d love to leave that family, coach the Chicago Bulls, buy a home with an infinity pool and have access to a great deal of gratuitous sex. Or maybe get back together with his soon-to-be ex-wife. Or possibly both. Hey, when you’re coaching the Chicago Bulls, anything’s possible.

But he seriously doubts that the Bulls will be plying a winless high school coach with eight-figure coaching contracts. Not even the Denver Nuggets would do that. No, he’ll really have to win a game for that to be a realistic possibility. Turns out, he’ll do anything to win that game. Anything.

Just how bad is Hoops? Imagine a basketball team made up entirely of rabid, in-heat bobcats. Then ask that team to play the L.A. Lakers. The results will be the same: a hissing, yowling, pitiful mess where someone’s bound to get hurt—even if they’re just watching.

Ben hurls more f-words than his team throws bricks, and that’s saying something. The whole team is seriously preoccupied with sex. (Ben rewards his players with his porn-site passwords when the mood strikes.) The show commits a dizzying number of foul fouls, and it is indeed an abysmal effort, as free from morality as it is in comedy.

That’s right: Hoops doesn’t even have the will to be funny. In any way. Anywhere. At any time.

Ben Hopkins would love to win a game. Maybe even several. And maybe by the time Netflix decides to shelve this series, he will. But that doesn’t make this show a winner. Norman Dale knows what winning really takes—and if he was running Netflix’s lineup, Hoops would be benched.

Lenwood principal Opal Lowry tells Ben that unless his team starts showing some promise in the next game, Ben’s out of a job. So he decides to make a last-ditch effort to recruit Matty, the tallest kid in school, to play for him. And he uses the promise of sex to do so.

“I’m going to get you laid, Matty,” Ben promises the 16-year-old student. But the town prostitute charges $500 for intercourse, and Ben only has $85 to his name. The rest of the team chips in the needed cash to pay the prostitute, knowing that if Ben’s fired, the school will bring in a real coach.

We also learn that Ben’s wife (Ben hasn’t signed the divorce papers yet) is with Ben’s best friend/assistant coach, but Ben still would love to get back together with her, and he still texts her most every night.

We hear lots of references to various body parts (not all of them obscene, but all quite descriptive), speculation and commentary on the size of those body parts, and a couple of toilet-humor gags. Ben launches into a suggestive diatribe against referees in one game that involves the two of them, a hamster and certain body parts.

A pregnant student apparently gives birth at a basketball game. We hear in passing about a Bar Mitzvah.

We hear about 45 f-words in the course of the 25-minute episode, along with about more than 15 s-words and a legion of other profanities (including “d–k,” “d–n,” “a–,” “h—,” “t-ts” and “pr–k”). God’s name is misused four times, twice with the word “d–n,” and Jesus’ name is abused thrice. Ben aims crude hand gestures at several school board members.