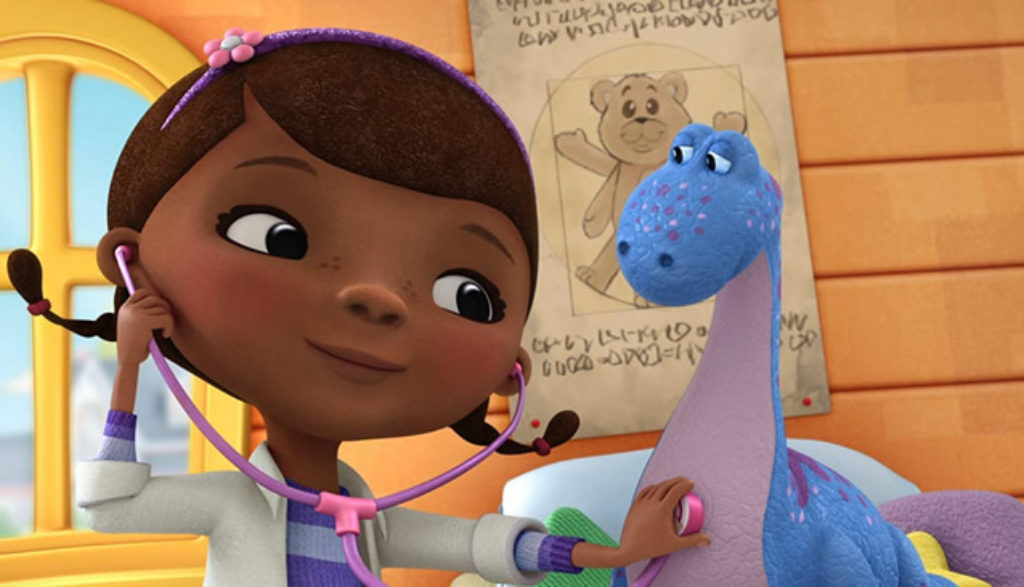 Most people don’t like going to see the doctor. But when you’ve got someone like Doc McStuffins and her toy friends to see, visiting the doctor is no sweat.

Dottie “Doc” McStuffins is a 7-year-old girl who wants to become a doctor, just like her mom. And although she has quite a few years before she can accomplish her dream, she doesn’t let that stop her. Doc uses her magical stethoscope to bring her stuffed animals to life, and together they patch up other toy friends.

Who’s on call in Doc’s literally plush hospital? There’s Stuffy the Dragon, Hallie the Hippo, Lambie the Lamb and Chilly the Snowman—and each of these stuffed playmates rely on Doc’s expert advice as they bandage boo-boos and patch people to perfect health.

Doc McStuffins began its run in 2012 and is currently in its Fifth Season. Seasons One and Two focused on Doc taking care of patients in her own backyard. In Seasons Three and Four, titled Doc McStuffins: Toy Hospital, Doc opens up her own veterinary clinic for all toy pets in need. And now, in Season Five’s Doc McStuffins: Pet Rescue, Doc’s grandmother has magically transported Doc to the magical new world of McStuffinsville where Doc works as head of McStuffinsville Hospital.

EVEN IN DOC’S WORLD

Creator and producer Chris Nee has been praised for her successful show featuring a strong, African-American female lead. Of the show, she told the website AfterEllen that the idea came to mind when she took her son to the doctor for his asthma. She thought “I wish I could make the fact that he spends time in the doctor’s office—I wish all of that could be made a little less scary for him.”

Because of Doc McStuffins, the doctor is less scary for many children. Indeed, many young viewers might be inspired to follow in Doc’s inspirational footsteps. But what might be a little frightening for some families though, are the subtle messages that Nee, a lesbian, wants to communicate through Doc’s world.

When asked by the AfterEllen about the messages she wants to give children, Nee said that she wants to show a world of characters “who are incredibly accepting of each other and whatever is happening in their life… [Doc’s] own family is incredibly important but ultimately this group of characters that are so incredibly different have created their own family in the clinic.” And this supportive family that is created in Doc’s world is, as Nee believes, “reflective of so much of what we all go through as we’re first coming out as young kids and whatever the process is with our own families.”

The show did feature a lesbian couple in one of its 2017 episodes, but we really don’t see much else regarding sexuality. The show is, first and foremost, about an extraordinarily kind doctor who encourages children to work together, problem solve and love their neighbor.

After seeing the First Responders rescue helpless toys, Stuffy wants to join them in saving the day. Doc McStuffins and the crew create their own animal rescue team to help Stuffy fulfill his dreams.

Stuffy is disappointed that his team isn’t exactly like the First Responders. He sulks, negatively compares his experiences and isnt easy to convince (or teach). But eventually he apologizes and learns to work as part of a group.

Doc McStuffins, Lambie, Chilly and Hallie all encourage one another, including Stuffy, to see the bright side of things and work together to save toys in need. A few toys are nearly hurt and some fall down pretty hard.