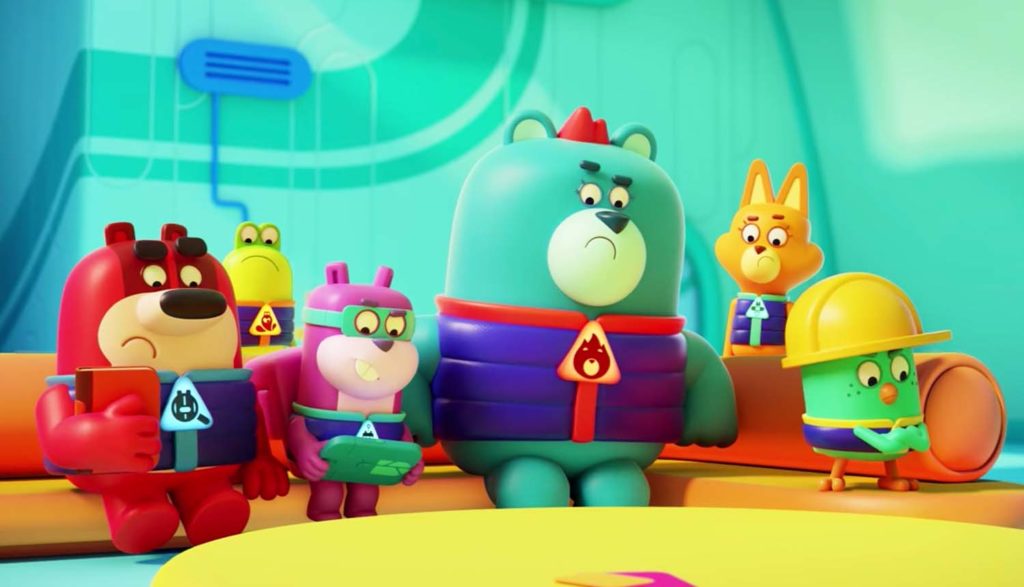 The often discombobulated and always bubbly Big Tree City Rescue team never makes it through a mission without learning a life lesson. Whether the team must face their fears or learn to trust each other, the colorful creatures get the job done. Eventually.

Major Prickles the porcupine leads his team in rescuing people dealing with accidents (primarily mechanical and electrical failures). Unfortunately, Major Prickles is scared of almost everything, and the team doesn’t always get along. But they respect each other and always work things out in the end.

Young kids will enjoy these construction-filled adventures, and it has few negative elements worth mentioning. A few time characters fall through the air, but they never end up hurt. The characters can be a bit selfish and focused on doing things their way without acknowledging the damage they are doing to others. But it’s all done to teach kids watching to be kind and cooperative themselves.

The stories are lighthearted and intentional. It’s not a show that parents will likely watch on their own. But preschoolers might enjoy this gentle show.

The team must save a parade from running over a pig trapped in a trash can. This is complicated by Prickles’ fear of balloons. Then, the group must get the power working for a pop concert, which they do through exercise. This requires Prickles to deal with his apprehension of sweating too much in front of the rest of the team.

The team tries to get the pig out the trash can with a construction digger and ends up throwing the poor guy into the air. He creates a pothole when he lands, but he is fine. Major Prickles lies to try and cover up his fear of balloons, and he sends the parade over an unsafe and windy bridge to avoid them. Then the team accidentally lifts the bridge off the ground with the balloons. They swing Major Prickles around by his legs from a helicopter to pop the balloons and make the bridge land before it breaks too many things.

In the second story, two of the workers accidentally break the backup generator and get distracted meeting the pop star. The solution: a stationary bike that will power the lights. Major Prickles comes up with many excuses before finally riding the bike with his team.

Major Prickles tries to convince Pecky, a team member, to get a new construction digger because the old one is slowing her down and making her late. She responds by coming up with chaotic ways to speed it up. In the second half of the show, two other team members must overcome their squabbling to make it to a trust fall presentation on time.

Pecky is always late, and she is reprimanded. A montage shows the construction digger knocking walls and buildings down haphazardly, including the walls around a Big Tree City citizen on the toilet holding a newspaper. When Pecky tries to turn the digger into a catapult (and thus speed it up), it sends tools flying—and falling—to break all over the ground. A few almost hit Major Prickles, and some disrupt the lives of citizens and almost hurt them. Team members are also catapulted, but they land safely on the ground.

Pecky and Kit, another team member, are not working together well. They are always late and blaming each other. Major Prickles tells them that they must be on time for the trust fall presentation or he will “fall on his bum.” As the pair fights again, they accidentally turn on the shutdown protocol for headquarters. In order to get out, they must dodge and battle defensive mechanical arms designed keep them inside.

Kit doesn’t listen to Pecky until after the bird is hit in the hard hat repeatedly. They blame each other for everything until they have to learn to work together to keep each other from falling off a leaning bridge and away from a “particle disruptor,” which lasers things to bits. They manage to slide under their team members during the trust fall presentation to catch them.