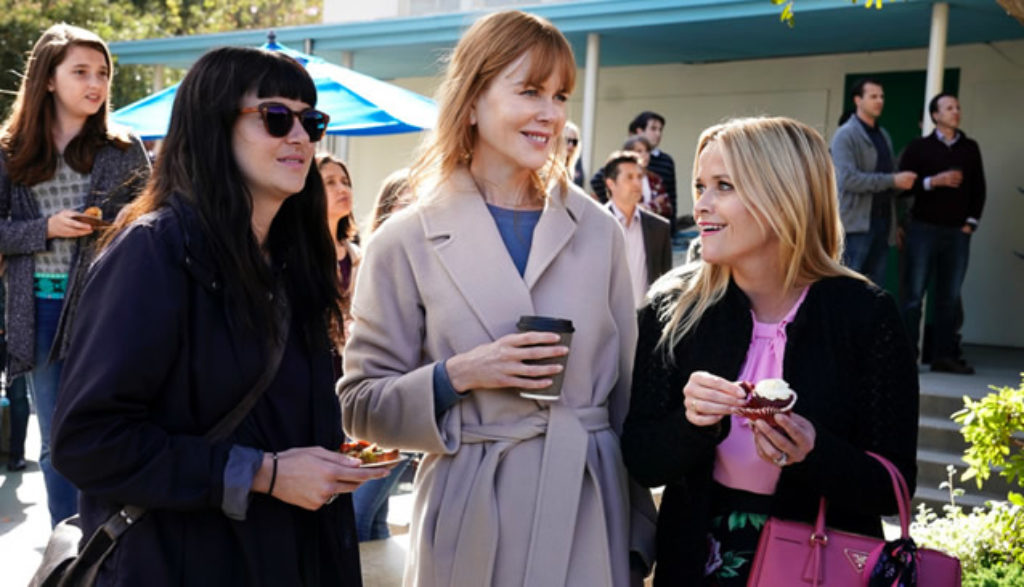 Secrets are murder to keep. Especially if your secret is murder. Five moms from beautiful Monterey, California, are learning that the hard way.

Oh, the official story is that a guy named Perry just lost his balance and slipped down the stairs. But the five of them—Perry’s gentle, self-blaming wife Celeste; rich, bossy Madeline; powerful Renata; young yoga instructor Bonnie; and free-spirited newcomer Jane—know what really happened. Celeste was planning to leave her abusive, philandering, rape-y husband. When Perry found out, he attacked her. Celeste’s friends tried to pull her away when bam! Bonnie pushed the guy down the stairs.

Turns out, killing someone is surprisingly easy with the right amount of oomph. Getting away with it? That’s harder—even if you’re never officially caught.

As Season 2 opens, the police still have no idea what really happened, and the women are still holding to their story. But like a Pacific storm off the coast, clouds are beginning to gather. Rumors still swirl, and the women are now known around the community as “The Monterey Five.”

Bonnie never wanted to lie. And given the circumstances, she probably would’ve escaped jail time. But when Queen Bee Madeline told the police it was an accident, the rest fell in line. Now the secret’s eating Bonnie alive.

“You know I can’t talk to my husband?” She spits at Madeline. “Or my kid. I have to just swallow it all.”

Meanwhile, Celeste is having nightmares, blaming herself for Perry’s death and fantasizing about the good times she and her hubby used to have when he was alive.

“You glad that he’s dead?” Jane asks her.

Also complicated: her relationship with her mother-in-law, Mary-Louise. Perry’s grieving mom is helping Celeste take care of her second-grade twins, Josh and Max. But Mary-Louise is suspicious about how Perry really died, and she knows nothing about the dead man’s many faults.

“I want Perry back,” she confides in Madeline. “I’m very tempted to ask you [what happened]. But I doubt I would get the truth, would I?”

The case isn’t closed yet. But Madeline has houses to sell. Jane has children to teach. Renata has tech execs to intimidate. And all of them have second-graders to take to school. Life goes on.

And so do the secrets.

HBO’s Big Little Lies (based on a novel of the same name) doesn’t draw viewers like its recently departed stable mate Game of Thrones did. But when it comes to critical praise, few shows are its equal. It already boasted an A-list cast in its first season, including Oscar winners Reese Witherspoon (Madeline) and Nicole Kidman (Celeste). Both were nominated for Emmys, with Kidman taking home the trophy—one of eight the show won in its awards debut. Now in its second season, the drama has ushered the legendary Meryl Streep into the fold as Mary-Louise, and the critical raves have gotten ravier.

But despite the constant presence of little kids in every episode, family viewing this is not.
Sure, if we were feeling particularly generous, we could say that the show delves into complex characters and their equally complex relationships, and one might even find a moral of sorts: Lies and sins have a way of haunting us, even when we try our best to shut our eyes to them.

But you have to wade through a lot of gunk to get to those positives. Sex, and sometimes nonconsensual sex, is a big deal here—so much so that newcomers might need a flow chart to keep track of who was married/had sex/was raped by whom. Nudity can be pervasive and at times exceptionally graphic. And violence … well, no one’s been killed in Season 2. Yet. But give the show time.

Characters sometimes retreat to alcohol to assuage their hurts and guilt and anger—though that remedy often increases those problems instead of soothing them. And swearing … well, let’s just say there’s a lot of it.

Big Little Lies offers some little lessons along with some big problems. But despite its excellent cast and strong writing, it would take more than a little push for me to fall for this show.

The second season culminates as Celeste fights Mary Louise for custody of her boys, Madeline and Ed decide what to do about their marriage, and the Monterrey Five finally admit that their lie about Perry’s death is tearing each of them apart inside.

Flashbacks once again show the gruesome nature of Perry’s death. Another flashback, this one from Mary Louise’s past, gives a look at the day her other son, Raymond, was killed in a car wreck (we see the dead child in the car as Mary Louise grabs a 5-year-old Perry and blames him). Celeste finds a video that her sons recorded showing Celeste being beaten by Perry. Bonnie has daydreams of smothering her mother with a pillow. Using a baseball bat, Renata smashes her husband’s “toys” to pieces and then accidentally hits him in the stomach when he tries to stop her.

Celeste admits to losing her temper and getting violent with her sons. She accuses Mary Louise of doing the same with Perry as a child. Mary Louise calls Celeste a liar and insists that Jane is “mistaken” about being raped. Max and Josh, Celeste’s sons, play a video game that requires them to kill things. They also ask if Celeste beat Mary Louise up in court, which shocks Celeste.

It is implied that Jane has sex with Corey. (They are seen partially undressed, she in a bra, getting intimate). Quick flashes show the violent and romantic nature of Celeste and Perry’s marriage (both are seen topless). We see Celeste in the shower from the shoulders up. Renata confronts her husband for sleeping with the nanny.

Celeste is accused of misusing Ambien and mixing it with other things (alcohol, most likely). Getting drunk at a bar and wine are both mentioned. The f-word is heard at least 13 times. Jesus’s name is misused once and the Lord’s name is taken in vain 7 times (twice paired with “d–n”). “Bulls—”, “d–n” and “h—” are also each used once.

Everyone has problems. Renata and her husband, Gordon, have been forced to declare bankruptcy in the wake of Gordon’s recent legal problems. Jane tries to build a new romantic relationship with coworker, Corey—the first she’s attempted since she was sexually assaulted nine years ago. As her mother lies dying in a hospital bed, Bonnie relives painful memories of abuse from her childhood. Madeline and her husband, Ed, attempt to rebuild trust after many of her lies come to light. Meanwhile, Celeste has been using drugs and alcohol to deal with her grief, resulting in a custody battle for her boys with Mary Louise.

In quick flashback shots, we see the night of Perry’s death with his dead corpse lying on the stairs and a beat-up Celeste. Celeste tries to remember a sexual encounter she had while on Ambien (a recollection that involves brief nudity). Viewers also witness a young Bonnie violently grabbed and screamed at by her mother. (She rubs her bruised arms afterwards.)

Celeste’s and Jane’s sons gang up on a boy after he calls their father a “rapist.” Viewers see them shoving and hitting the boy, then kicking him while he is down. The principal later informs Jane and Celeste that the boy is in the hospital having his lip stitched up, and that all four boys involved are suspended.

Jane and Corey kiss and remove their jackets. When they move to the couch to continue kissing (and perhaps to go further), Jane starts to weep uncontrollably and they stop. Ed has drinks with a woman in the bar wearing a cleavage-revealing top. Bonnie wears a midriff-baring top. Madeline drinks a large glass of wine.

We hear the f-word 19 times in different variances and the s-word twice. God’s name is misused 11 times (twice paired with “d–n”) and Jesus’ name is also misused once. “A–,” “p—y,” “h—,” and “b–ch” are each used once by child characters. Viewers hear an additional “h—” and the word “sluts” used by adult characters. There is also a reference to swingers and wife-swapping.

It’s the start of another school year, and the five women who know how Perry, Celeste’s husband, died, gather for the first day of school to greet one another and to intimidate the faculty. They don’t notice that others are looking at them askance, calling them “The Monterey Five” behind their backs.

Celeste dreams of her dead husband, both figuratively and literally. Her daydreams are filled with good memories, kisses and intimate moments, while her nightmares are loaded with violence and blood. In flashback, we see some of the injuries that Perry inflicted on her—and in a dream we see a scar she gave him.

She shares a drink with Jane, a young woman whom Perry raped and fathered a son by. (Jane admits that she was initially open to Perry’s advances, but insists that the final act was nonconsensual.) Nathan, Madeline’s ex-husband and Bonnie’s current one, frets over Bonnie’s zombie-like demeanor. When he tells Madeline that Bonnie has “shut down,” Madeline snidely says, “You mean you’re not having sex.” A woman in a grocery store talks to Ed, Madeline’s current spouse. When Ed says he didn’t recognize her at first, she says it’s because she had her breasts enlarged. She’d felt insecure, she tells Ed, over her nose.

“Now nobody notices it so much,” she says. “But everybody notices these, though.” She and others wear cleavage-revealing outfits.

Abigail, Madeline’s and Nathan’s high-school-age daughter, announces she’s not going to college, telling her mother that all they do at college is “drink, they f—, they mull over a sex change.” A guy drinks heavily while watching his toy trains. Madeline wonders if someone’s selling marijuana (which she says she smells). We hear about the mating and related eating habits of female octopi. Characters say the f-word 10 times and the s-word another half-dozen times. We also hear “h—,” “p-ss” and about five misuses of God’s name, one of those paired with “d–n.” This preschool-aimed show is packed with an extensive vocabulary, bright colors and fun music.