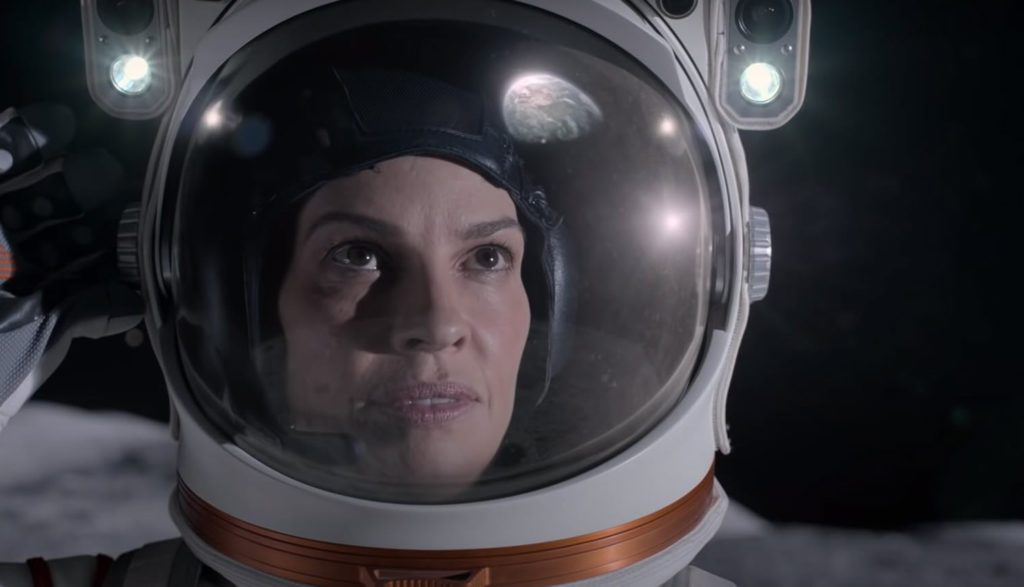 Looking for Mars? Turn to the east.

If you’re reading this in September of 2020, the same month that Away rocketed to Netflix, you can see the Red Planet there, often shortly after dusk. It’s not hard to spot: It’ll be perhaps the brightest object in the sky, if not the brightest. And true to its nickname, it carries with it a reddish tinge.

Ever since Galileo first spotted the planet in 1610, we earthlings have been fascinated by our closest planetary neighbor—wondering whether it might be home to intelligent life. In the late 1870s, we imagined Mars was crisscrossed by canals filled with water. H.G. Wells wrote The War of the Worlds in 1898, speculating that it was populated by would-be invaders. Warner Bros.’ Looney Tunes gave birth to Marvin the Martian in 1948. And for all that time, scientists and dreamers alike wondered whether we ourselves would one day visit the planet, too: How would we get there? What would it be like? Could we live there?

For centuries, it seems, we’ve been fascinated with life on Mars—even if that life is simply our own. And in all the excitement of that possible adventure, perhaps it’s understandable we’d forget the lives left behind.

Emma Green and her husband, Matt Logan, have wanted to travel to Mars since they were kids. But for them, the desire was no idle daydream. Both became pilots and dove headlong into astronaut training, determined to put themselves in position to take a rocket-fueled wagon train to Mars. Matt’s career as an astronaut was cut short by a hereditary disease, but Emma barreled onward. Through decades of work, she put herself in position to not just man, but helm the Atlas spacecraft and the first manned trip to the fourth planet from the sun—supported every step of the way by her hubby.

But to realize her interplanetary dreams, Emma will have to leave behind her husband and teen daughter (Lex) for three full years—and that’s if she’s lucky. Because of the dangers of traveling so great a distance, the astronaut knows she might never return. And even if she does, there’s a chance that her loved ones, especially her husband who’s recuperating from a stroke, won’t be around to greet her.

She’s part of an international five-person team, all of whom are leaving behind loved ones and complex home lives, too—some more complicated than others. Life aboard the spacecraft won’t be simple, either. All of the astronauts bring their own personalities—and their own baggage—with them. All needed to be fiercely competitive to get to where they are, and some doubt Emma’s ability to lead. The ship is bound to be filled with its share of friction and outright clashes. And if someone needs to storm out and get some air, tough luck: They won’t find any of that outside those pod bay doors.

Starring two-time Oscar-winner Hilary Swank, Away’s premise is both powerful and poignant. For even as it reminds us of the aspirational wonder of space travel, it reminds us of something else: That it’s not just gravity that pulls us back home.

Sure, the crew must deal with lots of perilous space-related issues, from too much fire to too little water; from space-related insanity to very earth-bound political shenanigans. But from the opening episode, relationships—both those on the ship and those back on Earth—are what this story revolves around. With all due respect to Isaac Newton, we’re reminded that our own emotions move us to action as much as physics do, and sometimes more.

But in Away, that very human takeaway doesn’t always manifest itself in the most positive of directions. Three years away from your loved ones can take a toll, and marriage bonds may be mightily tested. The show focuses on a same-sex relationship as well—with the show suggesting that an unwanted marriage is just getting in the way of the astronaut’s “true love.” We see a bit more skin than we’d expect in a PG-14 show like this, and we hear more profanity, too. Those issues don’t make Away a bad show, by the way. But that content also illustrates how entertainment in the 21st century has left the orbit that many families were previously comfortable with. And finding a new one may be a bumpy trip indeed.

Emma and the crew of the Atlas make their way to the moon, where the second stage of their journey to Mars will begin. But when a fire breaks out in the spacecraft, some members of the crew believe that Emma isn’t fit to command. And when Emma’s husband, Matt, suffers a stroke back on earth, the astronaut wonders whether she should just go back home.

We see the fire aboard the ship several times (reflecting the various points of view of several team members). No one is hurt in the fire, but the potential danger is repeatedly emphasized. We also hear about the inherent dangers of the mission, with one journalist suggesting that the odds of them making it back to Earth safely are just 50-50. Lex, Emma’s daughter, is particularly shaken by this suggestion: She asks for reassurance from her parents, but Emma tells her that the job is dangerous. “There’s always a chance that I don’t make it,” she tells her. Matt suffers a stroke and collapses. We later see him in a hospital.

Much of the episode is told in flashback, and we see Emma and her husband, Matt, sharing their last night together. The interlude is sultry and obviously sexual: Both are clearly topless (though nothing critical is shown), and the two engage in a lengthy marital coupling. Aboard the ship, we hear some banter that references another crewmember’s genitals.

Emma’s daughter, Lex, debates what picture she should use of herself to invite friends over for a “launch” party (where they’ll watch the Atlas take off from the moon). She mentions to her dad that a friend of hers thinks she looks “hot” in a bathing suit pic. Someone strips off a shirt, revealing a sports bra underneath. A crewmember wears a ring around her neck, which she says was given to her by a “friend.” (In later episodes, we learn the friend is the woman’s same-sex lover.)

One of the crewmembers brings along a Torah, which he says reminds him of what he’s leaving behind. Another crewmember seems to pray. We hear the f-word once, the s-word four times and a smattering of other English vulgarities (including “b–ch,” “d–k” and “h—.”) God’s name is misused four times. We hear several references to motion sickness-induced vomiting.