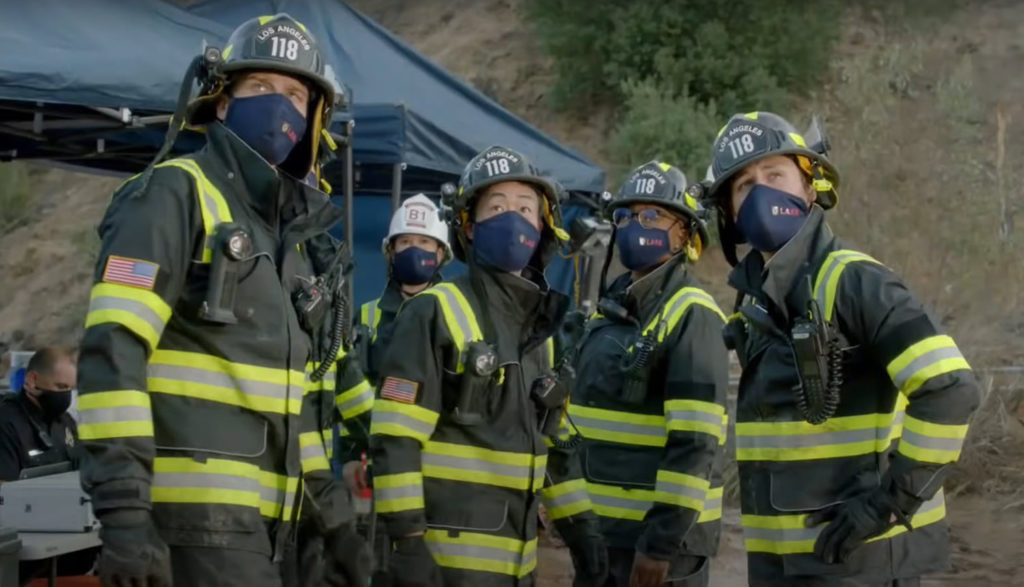 A friend of mine once insisted that being a mortician would be the most stress-free job in the world. What’s the worst that could happen? my friend asked. If you mess up super bad, someone lives?

Fox’s drama 9-1-1 takes viewers on a weekly ride-along with Los Angeles’ finest fictional first responders, showcasing a series of tough jobs that are never defined by punching a clock. It introduces us to a handful of folks who interact with 911 calls, giving us insight (well, as much as a rather rote broadcast drama can) into what makes them tick. And then, when our protagonists are done being heroes for the day, we follow them home, where we discover that things are no less messy.

Take Bobby Nash, a captain for the Los Angeles Fire Department. This paragon of firefighting virtue is also a recovering alcoholic who just returned to the gig after an 18-month leave of absence. He tries to stay away from the booze through counseling and regular church attendance. But as any recovering addict knows, it ain’t easy—and it sure doesn’t help having such a stressful job. If saving complete strangers every day wasn’t taxing enough, he also has to mentor Buck, the department’s hunky, hot-headed hotshot who, when not making mistakes in the field, hops into bed with most every woman who has a pulse.

Good thing Buck has Athena Grant, his fiancé and a tough-as-nails police officer, to help him make it through hard days. . But Athena needs a little help processing her own difficulties, too. After her ex-husband, Michael, left her for another man, Athena’s still picking up the pieces of her broken marriage while raising their two children.

Maddie Kendall doesn’t have the same sort of hands-on responsibilities that Bobby and Athena have: As a 911 operator, she simply takes the calls and does what she can to help (unless the caller’s idea of an emergency is overheated chicken nuggets, as sometimes happens). But the poor woman is always on call and often puts out fires of a different nature: When she’s not answering desperate pleas from Los Angelinos during their worst days, she’s overcoming personal trauma and attempting to balance her love life.

We don’t need to be told that first responders are heroes, but it’s nice of Fox to remind us anyway. It emphasizes to me, once again, that I made the right decision in becoming a Christian television critic.

The jobs these folks do are only for the sturdiest of souls—those who are able to fight like the dickens to save someone’s life, but who can move on to the next call even when the last one didn’t end well.

I’m also grateful that the show’s first responders take their lives so seriously outside the workplace, too: Bobby’s faith is a welcome outlier in the world of broadcast dramas. Athena’s desire to adhere to her marriage vows in spite of the circumstances is rather admirable. Abby grows frustrated with her mom on occasion, but what caregiver doesn’t? She still chooses, every day, to do what must be done.

But none of those positives necessarily save this show from its problems. If heroism sits in the front seat, sexual content lounges in back. While the show steers clear of nudity, we do see intimate encounters sometimes (including some same-sex pairings), and characters often actively push other characters to engage in said activity. Language can be harsh as well.

And remember that this is a show about people’s emergencies, and emergencies are rarely pretty. While 9-1-1 isn’t nearly as graphic as it could be, viewers will see people bleed and sometimes die. Also worth noting: Rescue workers lie a lot. It’s almost always done in context of a job, protecting victims from becoming distracted or distraught while in danger, but still. Can’t shake my Sunday school education that taught me lying is never a great thing.

9-1-1 feels, in a way, like Abby’s job manning the emergency phone lines: You never know from week-to-week—or even from minute-to-minute—what emergency might get called in next. And while viewers will certainly experience their share of inspirational happy endings, other times could get messy indeed.

Buck deals with the trauma of discovering he was only born to be a marrow donor for his brother, who died while Buck was still an infant. The team rescues people from a burning hand-sanitizer factory.

Two men are thrown when an explosion goes off, and one is crushed beneath a water tank. Several people covered in ash are pulled from a burning building. We see Buck at different stages during his childhood and adulthood with multiple lacerations on his face and body after crashing bicycles, skateboards and motorcycles. We see a woman bruised and cut up after her husband beat her.

Buck encourages his sister to leave her abusive husband multiple times in flashbacks. Their parents yell at Buck for being reckless with his life, but neglect to tell him that he had a brother who died.

Buck refuses a direct order to evacuate a burning building in order to look for someone still missing inside. He realizes that although he felt betrayed by his parents and sister for not telling him the truth, they all still love him and are proud of him for saving lives, even if it’s not the life they intended him to save.

911 operator Maddie Kendall attempts to plan a date with her boyfriend, firefighter Howie ‘Chimney’ Han, but plans go awry when a 911 power outage throws Los Angeles into a painc. Captain Bobby Nash and his team fratically travel throughout the city to prevent disasters during the power outage.

Homes, cars and buildings explode due to gas leaks. A woman crashes her car after a nearby home explodes. A young boy is trapped inside a burning home. A woman nearly dies after delivering her baby and going into cardiac arrest. We see an injured man with a bloody leg and a woman with a bloody nose. A firefighter nearly dies after his ladder breaks and, later, he saves a boy’s life by using his body to protect himfrom the fire. A dispatcher relays various emergencies. The FBI attempt to trace a possible hacker.

A man is upset when he learns his son favors his soon-to-be stepfather. A couple disuss their fears and need for counseling after a near-death experience.

Couples kiss, flirt and drink wine. A woman talks about her boyfriend sleeping over. God’s name is misused twice and other profanity includes various uses of “h—,” “d–n” and “a–.” A woman nearly says the f-word, but is cut short before finishing.

Buck scales a roller coaster to save people in a car that’s stalled upside-down. But one man can’t or won’t grab Buck’s hands and falls to his death—the first guy Buck has ever lost on the job.

We see the man fall and then see his body on the ground below, but we don’t witness the actual impact. We also see his buddy fly out of the roller coaster when the safety bar unexpectedly snaps open. He, too, is killed and we see his body on the ground. (Emergency personnel know he’s dead, but they put him in a gurney anyway, pretending for the surrounding audience that he’s still alive.)

Buck goes to see a counselor over the trauma he suffered during the rescue, but the session is sidetracked when he has sex with her. We see the end of their act: Both are mostly dressed, but they’re still clearly engaged in intimate contact. Buck later admits to Abby, who tries to ask him out on a date, that he has certain “issues” when it comes to women, and he turns the date down because he doesn’t want to sleep with her: He likes Abby too much, he says. Abby’s cool with the rejection: “Sometimes the right kind of no is better than the wrong kind of yes,” she says.

In counseling, Athena says that she could survive a “sexless” marriage with Michael, who says he’s gay, but Michael balks, saying that he’s “met someone.” Bobby and Buck rescue a man standing on a ledge who’s sure that his wife his having an affair. (The wife denies it, but she’s encouraged to apologize anyway. The man is later literally kicked back into safety.) Someone compares his job to having one-night stands: Those encounters are very dramatic in the moment; but the next day, he says, you have to forget all about them and go on.

A girl apparently overdoses on pills. The man who fell off the roller coaster had apparently tried to kill himself months earlier; he’s memorialized in a church. Guys ogle “hot girls.” A man who turns out to be a crook tries to make moves on Athena. Athena later seems to reciprocate, inviting him for some “afternoon delight,” only to apprehend him. Buck makes an unintentional double entendre during a television interview. This satire on “psychological novels written for women, by women” encapsulates all that encompasses them–both the good and the bad.

If you know kid, they all utter one question: “Why?” This child scientist seeks to find answers.