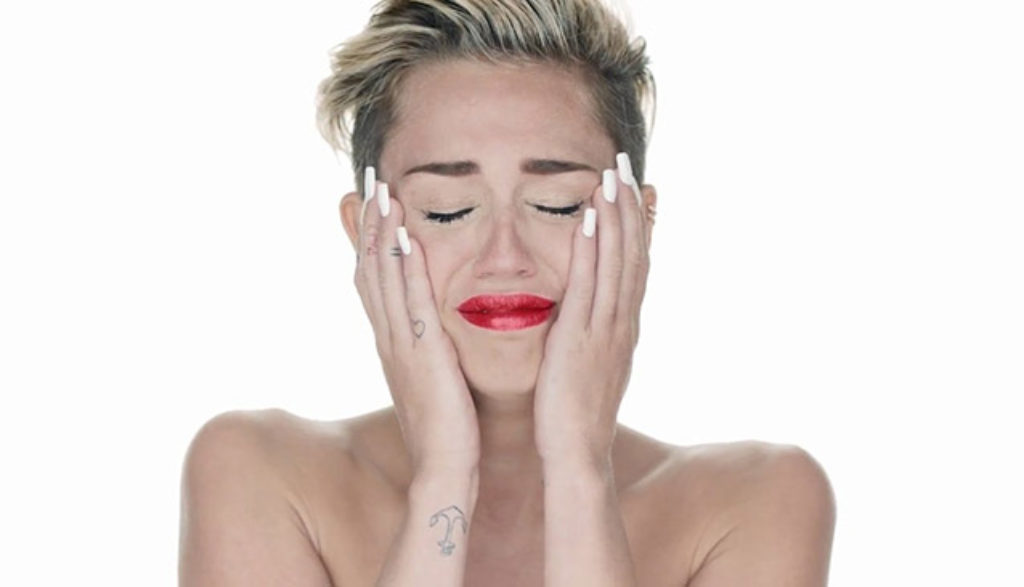 The title of the second single from 20-year-old Miley Cyrus’ fourth album, Bangerz, is “Wrecking Ball.” And given the gleeful way she’s deliberately dynamited her Disney image over the last few years, I susupected the song would be yet another blunt instrument taking one last demolishing swipe at the vestiges of poor Hannah Montana.

But it’s not anything at all like the seedy, boundary-blurring celebration of sex, drugs and hedonism that was Miley’s last hit, ” We Can’t Stop.” Instead it’s a vulnerable lyrical portrait of a woman lamenting the end of a romantic relationship.

The tune, produced by hitmeister Dr. Luke, has a decidedly rock-tinged flavor to it. Huge guitars frame a melodramatic chorus that wouldn’t have sounded a bit out of place in a 1980s-vintage Bon Jovi or Poison ballad. As for the story’s narrative, it begins with a torrid, urgent romance: “We clawed, we chained our hearts in vain/We jumped, never asking why/We kissed, I fell under your spell/A love no one could deny.”

But somebody gave love a bad name here, as Miley practically begs, “Don’t you ever say I just walked away/ … I will always want you.” Who’s to blame? “I came in like a wrecking ball,” we hear, “I never hit so hard in love/All I wanted was to break your walls/All you ever did was break me/Yeah, you wreck me.”

More metaphors include, “I put you high up in the sky/And now you’re not coming down/It slowly turned, you let me burn/And now we’re ashes on the ground.” But the predominant emotion in this pain-saturated pondering isn’t anger. Instead, it’s mournful regret: “I never meant to start a war/I just wanted you to let me in.” Only too late does it dawn on Miley that a gentler approach to overcoming relational barriers likely would have worked better: “And instead of using force/I guess I should’ve let you in.”

“Wrecking Ball” arcs through walls of achingly demolished dreams about what could have been. And while it voices only romantic regrets, it triggered for me another response. I wondered whether Miley Cyrus will someday have similar pangs of remorse over the way she’s taken a wrecking ball to her good-girl/role-model image. Because like the romance in this song, it’s in ashes on the ground now as well.

Music Video Update: If the song “Wrecking Ball” is poignantly understated, its video is anything but. It begins with a close-up on Miley’s face as she sings and sheds a few tears. Then we watch Miley, who’s wearing a cropped, curve-hugging tank top and white bikini briefs, as she paces a small, cinderblock room with a sledgehammer—which she kisses and licks suggestively. Soon a wrecking ball begins smashing walls. And Miley ends up riding it … completely naked. Strategic camera shots and arm placements keep us from quite seeing the most critical bits of her anatomy. But the video puts all the rest of her boots-clad body on full display. Predictably, it garnered nearly 20 million views in its first 24 hours and almost 150 million in its first couple of weeks on YouTube.

Miley says fans should look past the provocative imagery and realize that her nudity is meant to represent emotional vulnerability: “If people can take their minds off the obvious and go into their imagination and see what the video really means, it is so vulnerable. … If you look at my eyes, I look more sad than actually my voice sounds on the record. It was a lot harder to actually do the video than it was to even record the song. It was much more of an emotional experience.”

She and her producers know, of course, that emotional vulnerability alone doesn’t smash records. Riding naked on a wrecking ball does.