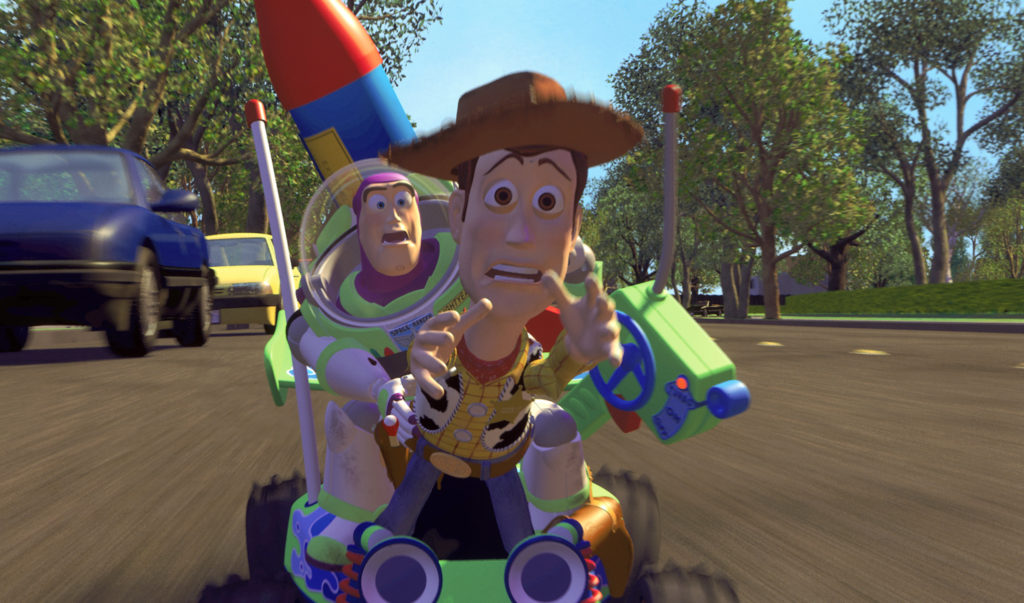 What is a toy’s greatest fear? That a newer toy may become the object of a child’s affection, thus condemning the one-time favorite to a lonely shelf or a darkened closet. For a pull-string sheriff named Woody, that fear becomes reality when his boy, Andy, receives a Buzz Lightyear space ranger doll, er, action figure, for his birthday.

Buzz proves to be tough competition for the low-tech Woody. Being the boy’s favorite, Woody has always interacted with the other toys like a benevolent boss. So when Buzz first arrives, Woody tries to make the interloper feel welcome. But as Andy gravitates toward Buzz more and more, the sheriff becomes consumed with jealousy.

To make matters worse, Buzz doesn’t think he���s a toy at all, but a galactic hero who must save the universe from the evil Emperor Zurg. His unexpected detour to the curious world of Andy’s bedroom has put the space hero off his assumed schedule. It’s all pretty grating for a toy like Woody, whose whole universe is that bedroom.

So Woody puts on a metaphorical black hat and tries to push the unsuspecting spaceman off the dresser—an attempt to get Buzz “lost,” perhaps forever. But the plan goes awry and Buzz is knocked out the window. The ensuing scandal makes Watergate look like jaywalking: Not only is Andy’s new favorite toy MIA, but Andy’s old favorite toy is the culprit, and a few of the other toys are so stirred up they want to knock the stuffing out of him. The only way Woody can make things right is by tracking down Buzz and bringing him back—alive.

Woody must learn to cope with feelings of jealousy, rejection and the humiliation of being demoted to second-best. Meanwhile, the arrogant Buzz is forced to sort through his own identity crisis bred by delusions of grandeur. In a poignant scene, he is devastated when a TV commercial blares forth the truth about his factory birth. Then he bravely chooses to accept his identity and impact his universe as a toy.

Woody and Buzz square off early, but the two adversaries find themselves relying on each another for survival when thrust into the cold, cruel “real” world. It turns out the most dangerous place on earth is right next door. A barbaric young neighbor named Sid tortures toys in ways that might initially frighten very young children, but even these hideously mistreated playthings reveal a soft side as they befriend Woody, and together they rally to save Buzz and teach their malicious owner to treat his toys with a bit more kindness.

Toy Story is packed with plenty of after-film discussion fodder. Parents can use Bible verses such as Ecclesiastes 3:1 and Luke 9:46-48 to examine Woody’s jealousy. They can use Buzz’s realization that he is just a toy—and his decision to be the best toy possible—to help children accept who they are as God’s creations. As a tangent—one that links directly to 1 Corinthians 12—they can talk about how the barrel of monkeys, Slinky Dog and the other toys use their uniqueness to work toward a common goal. And it’s always worth asking how Woody’s negative attitude toward Buzz caused his friends to doubt his honesty later.

After Buzz and Woody make their way into a pizza parlor, they encounter a cornucopia of squeaky, three-eyed alien toys in a coin-operated dispenser. Their sheltered existence has led these pitiable creatures to worship “The Claw,” which hovers above their heads, occasionally grabs one of them and sends it down the chute to a new existence.

“The Claw is our master,” they say. “The Claw chooses who will go and who will stay.”

As one is lifted out of the teeming mass of toys, it says that it’s going “to a better place,” and when Woody tries to free Buzz from The Claw, the alien-toys won’t let him. “Stop it, you zealots!” Woody hollers.

Alas, The Claw is wielded by Sid this time around, and Buzz, Woody and one of the chanting aliens take the long car ride to what Woody feels might be their doom. The claw-worshiper is more upbeat: “Nirvana is coming. The mystic portal awaits,” it intones—right before Sid gives it to his ferocious dog to be torn to bits.

The coquettish Bo Peep asks Woody if he’d like her to “get someone else to watch the sheep tonight,” to which Woody lets out a fairly lecherous-sounding laugh. She later pulls Woody under some mistletoe: The next time we see Woody, his face is covered with little lipstick imprints.

One of Sid’s toys consists of a tiny fishing pole squished between two nude Barbie-like legs. An unwilling participant at a tea party, Buzz demands that Woody refer to him by his new given name, Mrs. Nesbit.

Sid is a pint-sized Unabomber wannabe. He has an “I (heart) explosives” sticker in his room. And we hear him cackle maniacally on several occasions. His handiwork makes for some of the most horrific examples of toy abuse ever conceived of by a shifty-eyed computer animator. He blows up a defenseless soldier toy with a bottle rocket. He replaces the head of one of his sister’s dolls with that of a toy pterodactyl. And we know it’s not the first time Sid’s mangled his sister’s dolls, because Buzz has tea with several—all headless. Thus, the toys in Sid’s rooms are creepy, Dr. Moreau-like creations. Once, he even starts to burn Woody’s “skin” with a magnifier.

When the toys team up with Woody to frighten Sid out of his wits, several burnt dolls and mangled toy soldiers rise from the sandbox like B-movie zombies, staggering toward the boy with nails protruding out of their heads or limbs dangling from their bodies as if they’re auditioning for Night of the Plastic Dead.

Andy’s none-too-gentle with his toys, either, sending Woody flying down a stairway banister or soaring through the air. But at least he’s not strapping firecrackers to their backs.

Buzz loses an arm when he tries to fly out an open window and instead bounces down a flight of stairs. He and Woody have a serious brawl underneath a car at a gas station, too, and Andy’s toys hurl Woody out of a moving, er, moving van. An Etch A Sketch also threatens Woody with a lynching, hastily sketching an old-fashioned noose. Woody gets bonked on the head by a tool box (and all its accompanying tools).

The pizza restaurant features a “Whack an Alien” game—just like the popular “Whack a Mole,” only with critters popping out of a simulated, blood-drenched chest.

At worst, “idiot,” “stupid,” “bozo,” “dirt bag” and “creep” are used as insults. Woody does tell Buzz he’d have a choice word or two for him, but he can’t say them because there are preschool toys present.

Woody calls Buzz “Mr. Lightbeer” once. And Buzz weirdly gets tipsy at the tea party. “I think you’ve had enough tea for today,” Woody says, pulling the buzzed Lightyear away.

When Slinky Dog makes an impromptu speech on how much he trusts Woody, Mr. Potato Head takes the lips off his face and presses them to his plastic rear. Sid carelessly plays with firecrackers. Woody and Buzz use a big firecracker to launch them into the air and back to Andy.

Clearly, Sid’s parents are not very attentive to their children. And a toddler is given a toy clearly below the designated age range on the box. A pizza deliveryman displays poor driving judgment. A toy dinosaur apparently throws up off camera.

Disney’s blockbuster Toy Story is built around eye-popping animation, lifelike characters and strict attention to detail. The film creates an impressive, 3-D computer-generated world in which toys take on a life of their own when their owners aren’t looking. The result is a sweet confection for the eyes and ears that is generally as wholesome as it is visually stunning.

(Sometimes it strays a bit, but we’ve already covered that territory.)

In the age of electronic games, it’s refreshing to see children excited about toys that require pure imagination rather than a video screen and a joystick. In fact, parents are in for a grin-filled nostalgia trip as board games of yesteryear lie tucked away in the corners of the film. Also, subtle sight gags and cultural references make this a film adults will enjoy as much as children.