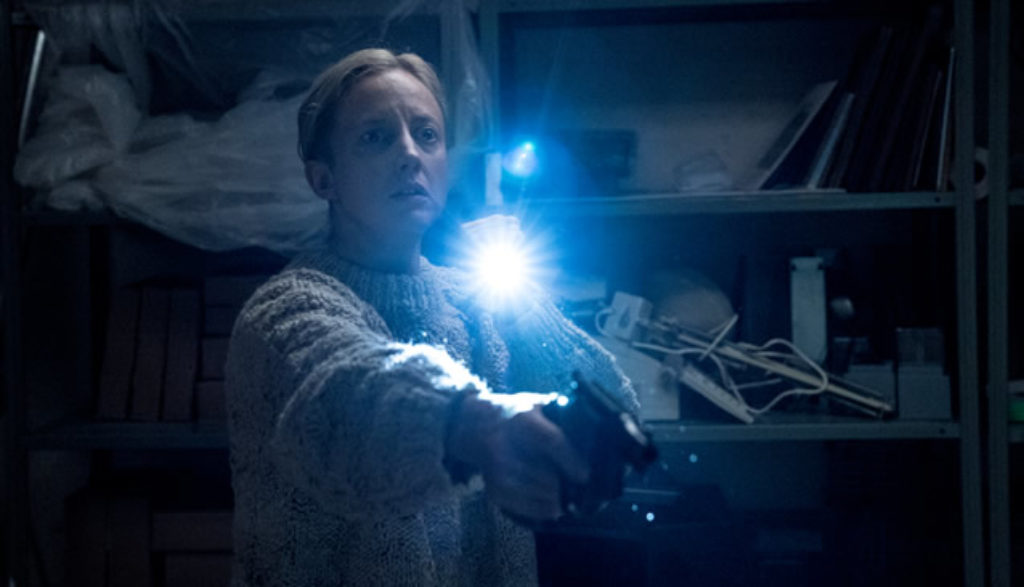 There are some who believe that when someone dies in the grip of a powerful rage a curse is born. The curse becomes an entity, s supernatural force called a Grudge, that’s reborn again and again, passing from one victim to the next in an ever-growing chain of murder and horror.

Of course, Detective Muldoon doesn’t believe in any of that nonsense. She has enough pain and heartache to deal with in the real world. After her husband died from cancer, she found it difficult enough to simply comfort her young son, relocate to a new town and just try to start over. No need to waste precious energy wrestling with some mumbo jumbo about a curse.

But wouldn’t you know it, that’s now on her plate, too.

The very day she steps into her new precinct, Muldoon gets a case involving a rotting corpse in a car discovered in a nearby woods. Turns out, that desiccated carcass is linked to a house where a murder took place a few years back.

An entire family was killed in that grisly crime. Muldoon’s new partner, Detective Goodman, is still so shaken by that case—one that he and his former partner worked—that he won’t even step into the house where it took place. He doesn’t appear to be some religious nut, but this grizzled cop talks of the energy of the house being all wrong.

Muldoon has no such superstitious hang-ups. But the more she digs, the more disturbing elements she finds: other deaths, other peculiarities, other unexplained and unsolved links. And they all seem to connect back to that house. Goodman’s old partner, Detective Wilson, then brings up the whole curse thing. He tells Muldoon it’s all linked to the house, a curse you pick up just by stepping through the front door.

Muldoon still isn’t giving the curse stuff a whole lot of credence, though, since Wilson is currently residing in a mental institution after trying to commit suicide. But when the former cop gouges his own eyes out right after talking to her, it leaves her unsettled.

I mean, she stepped in the house in the course of her investigation. She’s also been seeing a whole lot of odd things lately: shadowy figures that aren’t there, things caught out of the corner of her eye …

Man! As if she didn’t have enough to worry about. A cop’s life is no easy slog. It’s enough to make her feel a little ragey sometimes.

In the course of the film we find numerous examples of spouses and family members showing their love for one another. A young man named Peter and his wife Nina both proclaim their love for each other in difficult times, for instance. And after hearing that their unborn child will likely be born with a genetic disorder, they both emotionally speak of a desire to keep the baby. An older husband says that he and his wife had 50 wonderful years together, and he works to protect her now that her mental facilities are declining. A man put his life on hold to care for a dying mother. Etc.

(Spoiler Warning) All of the above people, however, are one-by-one swept up in the evil, dark “curse” and killed. Why this unstoppable rage-driven curse exists or is perpetuated on innocent bystanders is never explained, but the Grudge takes on the forms of ghostly figures—adults and children who have died in the past and reappear to physically torment and kill someone else. A couple of scenes also suggests that people are possessed by evil spirits and then compelled to kill their families before killing themselves.

Ghostly fingers appear from the back of someone’s head while he washes his hair. A young girl’s spirit shows up in several scenes—sometimes in a translucent ghosty form, other times in a more corporeal but speechless form. Ghosts appear in mirrors and windows and step out of the shadows. A young spectral child is engulfed in flames. Creepy ghost figures are spotted sitting in the back seats of cars. A ghost lays on top of a prone woman, drooling into her face and open mouth. And ghosts masquerade as the living by taking on the form of adults and children.

Mr. Matheson, an elderly husband who lives in the cursed house with his mentally and physically failing wife, admits that he has seen the house’s ghostly occupants. But he says he finds those ghastly things encouraging: “Seeing them gives me hope that maybe she might be around afterward, too,” he tells a therapist. “Anyone who has entered this house and anyone who will enter here, we’re all bound together.”

We see a number of crosses and crucifixes hanging on people’s walls. Goodman has a rosary and some pictures of religious saints in his car’s glovebox. Goodman watches a biblical film on TV. (The camera catches dialogue from the Jesus character saying, “This is my body …” before cutting away.) Goodman also states that although he isn’t particularly religious, his mother was “into ghosty s—.” None of this religious paraphernalia seems to have any spiritual impact on ongoing events at all.

Muldoon has a practice of encouraging her son to close his eyes and count to five when he’s scared. This technique doesn’t seem to help much either.

Peter and his wife kiss.

The Grudge is advertised as a dark spiritual thriller. And while there surely is plenty of darkness in the mix, the film is actually much more gruesome and violence-focused than you might expect.

We’re shown several corpses in different states of rot and decay, and in some grisly cases the camera examines the festering flesh and bloody mess quite closely. A woman repeatedly chops off her own fingers with a large knife and dices them into small pieces she can eat. Blood and gore spew in a gush from a young girl’s nose and mouth. A pregnant woman is brutally stabbed (off camera) and left dead in a large pool of blood. A man is grabbed and drowned in a tub full of blood. Various ghostly figures grab, pummel and tear at people.

A specter shows us how she killed her family members: breaking her husband’s neck with a heavy object and sending him tumbling down a staircase; viciously drowning her daughter in a tub of water; and finally, slashing her own jugular with a knife and spouting gore on the window behind her. A woman throws herself over the railing of a tall spiraling staircase to land on a lower floor and burst open like a blood-filled balloon. Another woman crashes her car into a tree and then her blood splashes the windows as something unseen attacks her from the backseat.

A man holds a woman’s face under water. A man pleads for someone to kill him and then (off screen) gouges his own eyes out. (We see the bloody rent flesh and torn aftermath.) A man shoots himself in the face, horrendously ripping open his mouth and cheek. (We see the man’s heavily scarred and misshapen face years later.) A woman sets a house ablaze. Numerous ghostly creatures charge at people with their mouths grotesquely gaping open and dribbling gore.

Three f-words and 10 s-words join a single use of “h—” and several misuses of God’s and Jesus’ names.

Goodman is a chain smoker who’s always puffing a cigarette or lighting up a fresh one. Muldoon says she quit, but soon starts lighting up and chain smoking as well when things start getting creepy.

An assisted suicide therapist is called in to help a suffering elderly woman end her life, but she refuses to help when she realizes that the patient is neither mentally or physically able to carry out the suicide on her own. The meat counter of a local store appears to be filled with dead animal carcasses and rotting, fly-covered meat.

It’s been said that horror is the last remaining genre to explore aspects of faith in modern film. It’s the last secular frontier where the tug and pull between spiritual good and evil can take center stage.

But you won’t see any of that spiritual tussling in this case. Faith, in The Grudge, is nothing more than a few religious symbols used for pointless set dressing. Goodness and good intentions are as easily brushed aside here as a gnat might be in a busy day at the slaughterhouse. Evil is the all-powerful headliner: It consumes, it kills and there’s no stopping it. And quite frankly, it makes for an ugly, gruesome and confused meh of a film.

I suppose it took a certain modicum of faith to invest millions of production dollars into a reboot of a remake of a horror franchise that gave up the ghost a decade ago. It took belief that some audiences might want to see this dreck if it was bolstered with self-cannibalism, child murder, and long, close shots of decomposing, maggot-infested flesh.

One can only hope that that faith was misplaced, too.