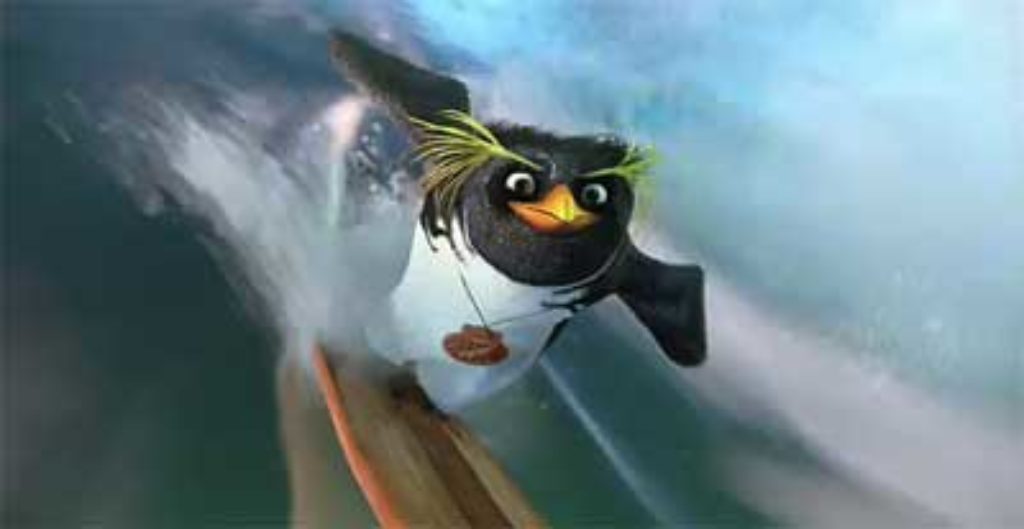 So says Cody Maverick, a 17-year-old rockhopper penguin obsessed with surfing. While his peers in chilly Shiverpool, Antarctica, dutifully incubate eggs and sort fish, Cody paddles into one icy swell after another. The impetuous youngster is undeterred by big brother Glen’s mockery and his mom’s inability to connect with his passion. Cody dreams of becoming a pro surfer (and a documentary crew chronicles his aspirations). A powerful memory stokes his ambition: the day surfing’s reigning patriarch, Big Z, paid Shiverpool an unexpected visit. Big Z’s message: “No matter what, find a way, ’cause that’s what winners do.”

Cody gets his shot at the big time when surfing talent scout, shorebird Mikey Abromowitz, glides into town on the back of a whale. Goodbye Antarctica, hello Pen Gu, an idyllic Hawaii-like paradise that serves as a magnet for monstrous waves and the world’s best surfers. Cody soon befriends Chicken Joe, who is an unlikely “waterfowl” boarder from Sheboygan, Wis., and a pretty lifeguard named Lani Aliikai. Standing feathers and flippers above everyone, however, is the obnoxiously self-centered champ Tank “The Shredder” Evans, whose rule began when Big Z was apparently killed while competing nine years earlier.

Despite Cody’s determination to show what he can do, a violent wipeout in an early surfing contest against Tank almost ends his career before it begins. But when Lani takes Cody to the home of a washed-out old surfer named Geek to help heal his injuries, the young penguin gradually discovers there’s more to surfing than just winning … and that there’s more to Geek than meets the eye.

Surf’s Up revolves around two positive themes: learning to enjoy life instead of being driven to win, and sacrificial friendship. The latter is first apparent in the way Lani relates to Cody. The lifeguard rescues an unconscious Cody after his disastrous wipeout, then carries him to the remote home of her friend Geek. Cody’s rehabilitation takes several days, during which Chicken Joe becomes concerned about his absence and goes wandering through the lush island forest in search of his lost friend. Later, Cody sacrifices his chance to win a surfing contest when he prevents Tank from taking out Chicken Joe. A young penguin wisely notes, “Friends are forever. Trophies, you never know what can happen to them.”

Under Geek’s influence, Cody discovers that winning isn’t what matters most in life. As it turns out, though, the old surfer dude himself is still working on that lesson, too. The pair hasn’t been together long when Cody realizes Geek is in fact Big Z. The aging surfer faked his death when he realized he couldn’t beat Tank 10 years before, and he’s lived in disgraced, disconnected solitude ever since. But Cody’s passion for the sport reawakens something in him, and Big Z takes the teenager under his wing, so to speak.

Big Z mentors Cody in making his own surfboard, relating the work directly to the art and sport of surfing. “Let the tool do the work,” he says. “Let the wave do the work.” (Think Mr. Miyagi’s “wax on, wax off” training of Daniel in The Karate Kid.) Along the way, Z hammers home the point that surfing isn’t about beating others, but about enjoying the wonder of shooting through a wave’s tube, of being joyously present in the moment.

In turn, Cody’s influence in Big Z’s life encourages him to come out of hiding and begin surfing again. Each fills an important role in the other’s life, and their relationship becomes almost that of a father and son. (Cody’s father, we’re told earlier, was eaten by a killer whale.) Cody gradually becomes less self-centered, evidenced in part by the fact that he abruptly ends an interview by saying, “I’m kinda bored talking about myself.”

Mention is made of ancient islanders who believed that a person’s heart is infused with a board as a surfer shapes it. Shooting through a wave, Big Z closes his eyes, places his palms together and bows slightly to the wave, as if saluting or worshiping it.

One of the film’s other characters, an otter, is an obnoxious, unscrupulous surfing promoter named Reggie Belafonte. He’s being interviewed in a hot tub, and when he stands up, his groin area is pixelated—suggesting he is naked—never mind that we see the same area a number of times later, and there’s nothing there to blur.

Cody and Chicken Joe ogle two female penguins on the beach; their vision zooms in on heart tattoos the girls have on their backsides. (Joe then gets one of his own.) For no apparent reason, the chicken also wears a bikini made of coconuts, even though he’s male. Tank then refers to Chicken Joe as Cody’s girlfriend. Searching for Cody in the jungle, Chicken Joe says, “I know he’s out here. I can feel it in my nuggets.” Cody and Lani take a “shower” together under a waterfall while soft music plays.

A silly but still a little creepy scene finds Tank talking about how he loves to hold the ladies close. “The ladies,” it turns out, are his surfing trophies. He has names for all of them, and he cradles each trophy lovingly as suggestive, jazzy music plays. He calls one of the trophies a “dirty girl.” Two other times he makes kissing noises as he holds them.

Much of the violence in Surf’s Up involves characters getting knocked about by waves and/or other surfers. Quite a few wave riders crash into rocks. Tank intentionally knocks a bunch of young surfers off their boards. Cody is repeatedly thrown about by huge waves in his wipeout, and he hits his head on a rock underwater. Anticipating a repeat performance later, Reggie gleefully talks about sharks circling, blood in the water and the “spectacular carnage” that he hopes await.

Elsewhere, slapstick shenanigans involve various folks getting hit with rocks, tree trunks, etc. Several times, the cameramen for the documentary get nailed with various projectiles, and cameras get dropped or go dark. Cody repeatedly slugs the much larger Tank, but his ferocity does no damage. In fact, Tank turns around and suggests that the younger penguin now work on his “glutes.”

Finally, “native” penguins with a taste for chicken plunk Chicken Joe in a big pot and begin to cook him. (Clueless Joe thinks it’s a hot tub and that the natives are treating him as a king; he escapes before any harm is done.) Cody’s mother splits fish in half with a cleaver a couple of times. And Cody’s father is shown smiling in a picture just as a killer whale jumps out of the water to eat him. It’s implied that Chicken Joe’s dad ends up as a “Six-Piece Combo” meal.

Cody says of Shiverpool, “This place sucks.” After Tank tells Cody he’s going to “chum the waters with your head,” Cody responds, “Bring it on, pepper face,” an expression that some moviegoers will hear as “pecker face.” (The wink-wink joke seems to be that Tank himself hears it that way, too.) Other name calling includes “lazy butt,” “blubber ball,” “big zero,” “loser” and “jerk.” A young penguin describes Tank as a “dirty trash can full of poop.” Big Z tells Tank, “You’ve got sand in your eggsack.” “Crap” is said.

Family dynamics among Cody’s penguin clan aren’t good. Glen picks on Cody mercilessly; he believes Cody’s aspirations are pure fantasy and doesn’t believe his brother (whom he labels a “bum”) will ever amount to anything. Mom mostly seems to ignore her son. Cody clearly dodges responsibilities other penguins his age have to shoulder. He complains about having to work, and he can’t see why desire to go surfing instead is a big deal. All in all, he exhibits a rebellious, self-centered attitude and never experiences any real repercussions for it. A flashback to Glen and Cody’s youth shows them fighting over who’ll get to eat the tuna that Mom just regurgitated for them.

Bathroom humor and scatological scenes include verbal and/or aural references to passing gas and/or poop. In the most egregious of these, Geek can only heal Cody’s fire urchin wound by urinating on the unconscious penguin’s feet—we hear what’s happening for several long seconds as Lani stands next to them, shielding her eyes.

Tank is insufferably self-absorbed, treats everyone very poorly and even steals food. We glimpse him lowering himself onto a bed of hot coals.

So is the surf tubular or is it a bummer? Let’s start with the totally tubular side of the equation. Obviously, Hollywood’s love affair with penguins has yet to run its course; fortunately, this story and its eminently likeable characters still feels fresh and fun, not forced. It’s an animated animal adventure with a lot going for it. Cody and Big Z are forced to face their unique brands of narcissism as they relate to one another (with the mature-beyond-her-years Lani facilitating). Big Z helps Cody see that there’s more to life than winning, but it’s a truism that the old surfer has to internalize anew himself. Along the way, deep friendships are forged amid the roiling (and spectacularly rendered) surf.

The ultimate message is that life is full of wonder-filled moments; but trying to find our identity by proving we’re superior to others makes it impossible to recognize and appreciate those moments when they occur. That’s a message worth pondering in a world where more and more children are thrust into scholastic and athletic competition at younger and younger ages.

On the bummer-dude side of things, though, it’s harder to appreciate a message about embracing life’s beauty with wide-eyed wonder when one character urinates on another (even when it’s for “medicinal purposes”); when another treats his trophies as fetishes; and when references to farts, poo and vomit sometimes float to the surface. That stuff is anything but wondrous. Instead, it’s boringly predictable, as if the writers got done with a pretty terrific story, sat down and said, “OK, now let’s go back and put in the yuck jokes and maybe a sex gag or two to spice this thing up a bit. After all, the kids’ll hate this flick if we don’t.”

It makes me wish that they’d had enough faith in their film’s core message that they could actually believe in it themselves.