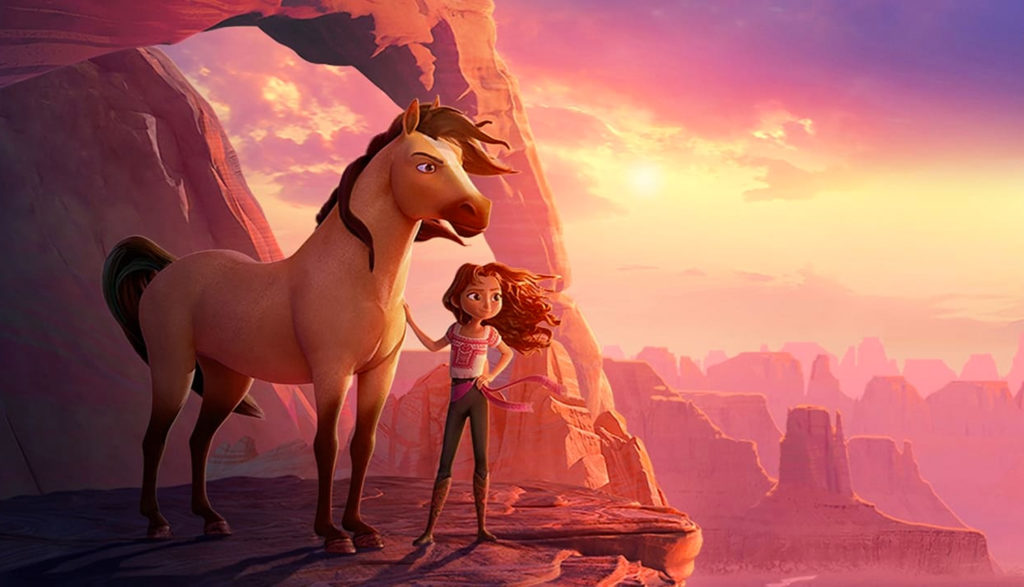 Tom was a little squirrely that day.

It wasn’t Tom’s fault. He was, after all, a literal squirrel—a mammal not known for decorum. The blame lay squarely on young Miguelita “Lucky” Prescott, who let Tom into the Prescott family mansion just as Lucky’s grandfather was announcing his candidacy for governor.

“I’ll run this state as firmly as I run my own home,” Grandpa solemnly promised the guests and reporters—just a split second before they eyed the squirrel-created devastation in the living room and Tom himself jumped on Grandpa Prescott’s face. Demonic Squirrel Targets Candidate! the newspaper blared the next morning.

Lucky and her guardian, Cora, barely had time to grab a morning edition before they themselves boarded a train out of town. “He’ll have to speak to us again eventually, right?” Lucky asks. Cora assures her that Grandpa will—once he’s had a chance to restart his campaign (and, presumably, let the squirrel bites heal). For the time being, Lucky and Cora are heading to the frontier to live with Lucky’s dad, Jim, in Miradero.

Why wasn’t Lucky already with her father, you ask? It’s a ticklish question. Years before, when Lucky was just a baby, her mother—a famous horsewoman—died in a terrible accident while performing. Grief-stricken Jim couldn’t be the sort of father that Lucky needed, and the frontier seemed like a dangerous place to raise a young lady. So Lucky went to live with Cora and Grandpa.

But now she’s back with her dad—the spitting image in body and soul of her adventurous mother. And while Lucky’s a little worried about living with her father after so much time apart and underwhelmed by the sleepy frontier town, she soon perks up. Lucky discovers she loves horses—just like her mother—and she meets a doozy of one in Spirit.

The horse was born a wild Kiger mustang, used to galloping through the wilderness untouched by bridle or saddle. But the steed, it seems, is wild no longer. A guy named Hendricks caught the horse and means to break him.

Hendricks takes the whole “breaking” thing a bit too literally for Lucky’s taste, and he seems to have even worse plans for Spirit and his four-legged friends. Meanwhile, Lucky’s dad, Jim, wants Lucky to hoof it away from those horses. After all, those animals killed her mother: He couldn’t bear it if Lucky got hurt, too.

But Lucky, a spirited young lass herself, spits her father’s bit. When Hendricks captures a herd of wild horses with the intent subjecting them to hard labor and early death, she and her human friends (level-headed Pru and feisty Abigail) sneak off to rescue them.

She and Spirit are in store for a pretty perilous adventure. Why, if Lucky can cause huge havoc with a squirrel, just think what sort of impact she can have with a whole horse.

I don’t know anything about horses, so I can’t say whether Lucky’s gentle, patient wooing of Spirit would actually tame the creature enough to ride him. But with people? Patience and grace are often needed. “You can’t rush these things,” Abigail advises Lucky, and that sort of advice translates well into plenty of relationships, perhaps including those of the equine kind.

And while the mustang Spirit certainly warrants his name, Lucky’s filled with her own indomitable spirit, too. While that doesn’t always manifest itself in the healthiest or safest of ways (as we’ll get into), we certainly can’t fault her for a lack of courage or heart. She risks a great deal for those she loves. And those qualities are worth admiring.

We shouldn’t forget about Jim, either. Yes, he freaks out when he learns that Lucky loves horses as much as her mom did. But the restrictions he places on Lucky come from a place of love: He wants to protect his daughter, just as any good father would. The movie makes sure we never see Jim as the bad guy—even if Lucky herself sometimes does.

Indeed, all the parents here care a lot for their kids. And when those kids willfully disobey their parents—even for ostensibly good reasons—the movie doesn’t allow them to escape punishment. When Pru encounters her dad after an overnight adventure, for instance, her father wraps her in a massive bear hug even as he tells her that she’s grounded “for life.”

Sure, the movie may be titled Spirit Untamed, but there’s little actual spirituality found here. Outside of that reference to a “demonic squirrel” and the fact that Lucky’s “luck” is referenced a time or two (sometimes ironically), the film is pretty much devoid of supernatural references.

Horsepower is not just a unit of measurement in this movie. Spirit is a pretty powerful beast, and he makes sure that the movie’s bad guys know it. Men are thrown off the horse and into fenceposts, often getting knocked out in the process. Spirit knocks people down, and sometimes he sends them flying into convenient bodies of water. And sometimes even when Spirit (and others) like the people riding them, they collectively deal with some pretty dangerous situations.

We know that Lucky’s mother died while riding a horse. We don’t see the accident; we only see the shocked and anguished faces of those watching.

People hurt each other, too. Guys get thwacked in the heads with oars. Some journeys down railroad aisles lead to comical slapstick moments. Abigail hogties her little brother. Even though Jim worries about Lucky hanging out with horses, his own home is something of a death trap. Cora finds a dynamite stick sitting with some carrots, and when Lucky says she’s going outside to explore, Cora tells her, “Yeah, it’s probably safer outdoors.”

Horses are given some pretty rough treatment. Spirit is lassoed and yanked about repeatedly, and we know that Hendricks means to send them off to some horrific working conditions. Hendricks uses his spurs pretty freely, too.

None, technically, though the movie does make a euphemistic nod or two in that direction. The environs surrounding Miradero include a towering peak called “Heck Mountain.” (“What the heck is heck mountain?” someone gasps.) Hendricks refers to his henchmates as “dimwits.”

Obey your mother and father? Lucky never heard of that one. When Jim tells her to stay away from horses, Lucky never even considers obeying. Moreover, she and her friends sneak out of their homes in the dead of night, surely giving all their parents a crop more gray hair in the future. And possibly ulcers.

But it’s not the only smell on tap. When Cora struggles through a cow-filled pen, she’s appalled by the odor of her dress. We also hear a scatological reference to a “road apple.”

Abigail accuses Snips of being a thief. Hendricks purposely knocks over a trough of water, so that Spirit will get “nice and thirsty.” We hear about fearsome creatures, including a possum who lights matches for no good reason and a “shifty fox being shifty.”

Spirit Untamed is a creature of complicated origins. Technically a spinoff of (or sequel to) Spirit: Stallion of the Cimarron, the two movies are quite different.

The original Spirit movie was a traditionally animated (and Oscar nominated) film largely told from the horse’s point of view (through thoughts voiced by Matt Damon). Spirit Untamed features the same horse, apparently, but … different. He keeps his thoughts to himself, for one thing. He looks different, what with his 3D rendering; he feels different, given the movie’s more kid-centric, cartoonish feel. And he’s joined by a whole new cast of human characters.

But let us not say that Spirit Untamed represents a reboot of the Spirit story. For fans of Netflix’s TV show, Spirit Riding Free, the plot should feel very familiar. Indeed, this is something of the show’s origin story (that the show itself unpacked in 2017).

But while Spirit Untamed isn’t exactly hoofing it through unspoiled cinematic frontier, it’s still plenty nice to look at.

Like many a coming-of-age film, Spirit Untamed showcases some headstrong behavior and some wildly unsafe decisions. But it seems unlikely that most young viewers will be inspired to seek out their own herds of wild horses to save. This story lauds courage, friendship and family—without throwing a massive amount of unfortunate content at us. Sure, it might look a little familiar to some. But for horse-loving, friend-loving kids, Spirit Untamed might be a winner. Or is that whinnier?