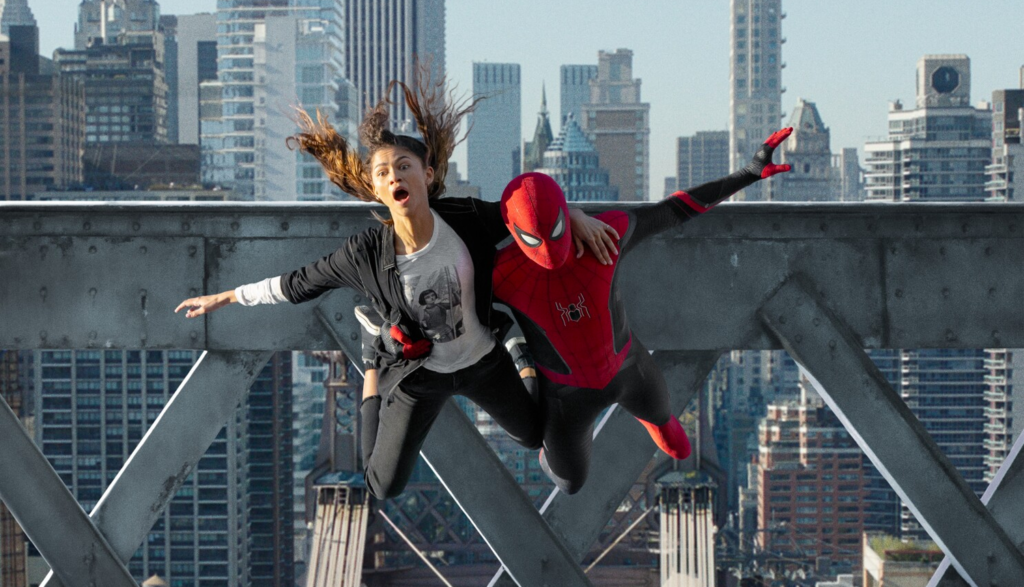 Peter Parker is a hated guy. Not only did the villian Mysterio  falsely pin him with the blame for murder and mass destruction (as chronicled in Spider-Man: Far From Home), he also revealed that he was secretly Spider-Man. Peter’s life has bottomed out. And his close friends, Ned and M.J., are outcasts because of their association with him, too. And that makes Peter feel all the more rotten.

But that’s not the worst of it.

Peter went to his mystical friend Doctor Strange for some help. And one accidentally miscast spell later—OK, it was all Peter’s fault—and suddenly all kinds of reality-cracking things started happening and these terrible bad guys began showing up.

“Trust me, Peter,” a large lizard-like creature hisses from within a magical prison cell. “When you try to fix someone, there are consequences.”

Of course, Peter doesn’t realize that this captured Lizard character (aka Dr. Connors) knows well of what he speaks.

But, see, that’s the real rub. This Peter Parker has never heard of Dr. Connors, or the Lizard. He doesn’t know anything about a Dr. Otto Octavious who sports powerful mechanical arms, or some supercharged dude named Electro. He hasn’t got a clue about any of the baddies that have appeared after Doctor Strange cast that spell.

All he knows is that they somehow know Peter Parker—or, at least, know a Peter Parker And they want to take him on and blow up the world around them. Are these villians from some other dimension, some other universe?

And  if so, what would Spider-Man in a different universe do to set things right? For that matter, how does he get these people back to where they belong? And how can he keep other supervillians from popping up and causing even more havoc?

To be honest, Peter doesn’t even want to deal with these guys. But I guess that’s what Peter’s Aunt May means when she notes that you have to shoulder the burden and help others, no matter how heavy the load.

I mean that’s what heroes–those gifted with great power–have to do. They have to step up and take responsibility.

Peter and this film both encourage viewers to think about doing the right thing by others. No, you can’t necessarily fix someone else, the film tells us—especially if they really don’t want to change their stripes—but you can try to help. You can share. You can give of yourself. That’s the right thing to do, No Way Home says, even when that giving effort ends in your own loss or pain. The film also notes that the desire for revenge—which can feel natural in the heat of pain and loss—is never the right choice. Rather, working with others and leaning on friends can help wounded people find a way through difficult times.

Several characters also share their own stories of loss with Peter, helping him (and viewers) see that even when you do everything right you can run into painful circumstances … but you must do good anyway. For instance, in one scene Peter wants to walk away from the needs of a seemingly disturbed individual in Aunt May’s charity shelter. But she stops him. “Look around you; this is what we do.” And her comment is clearly meant for herself and for Peter’s sake.

Peter expresses his love for his friends, and ultimately he makes choices that benefit them over his own needs.

As crowds in the street become more enflamed, Aunt May and Peter move into the apartment of Happy, one-time assistant to Iron Man and Aunt May’s former boyfriend. “Welcome to the spiritual oasis,” he intones when ushering them in.

Peter goes to ask Doctor Strange to turn back time to before Mysterio revealed his true identity. That’s not possible, however. Instead, Strange decides to cast a memory spell (complete with sprinkled dust and, apparently, magic runes that circle the air) that goes terribly awry. It’s the beginning of quite a bit of spell casting and magical events that take place as the story unfolds. (He and Peter also hop through alternate dimensions.) Ned ends up with a ring belonging to Doctor Strange and realizes that through his own limited magical ability—purportedly from his grandmother’s side of the family—he can open magical portals.

Peter’s spirit is temporarily separated from his physical form. J. Jonah Jameson signs off a report with the words, “Goodnight, and God help us all.”

The movie raises interesting questions about fate and the ability of a “bad” person to find redemption or make a positive change in their lives. Ultimately, Peter’s choices and actions—in spite of great loss—suggest that change is always possible if an individual will take the steps to try.

After Peter whisks girlfriend M.J. back to safety in his room, he starts stripping out of his Spidey suit—standing dressed just in his boxers—when Aunt May peeks in and thinks there’s something more intimate happening. (Flustered, she asks them to practice safe sex.) Peter stays dressed like that for a few moments before throwing on a T-shirt.

We hear casual references to the possible physical relationship between Aunt May and her one-time boyfriend Happy. Rumors swirl that Peter has a male spider’s ability to hypnotize and seduce females.

This being a Spider-Man pic, packed with a number of villains from past generations of Spider-Man films, we find lots and lots of thumping and slamming violence on screen. Characters are hit with large, heavy objects, zapped with immense blasts of electricity, hit with explosive bombs and thrown spiraling and thumping over great distances.

Otto Octavius, for instance, crushes multiple cars and trucks with his mechanical arms, endangering hundreds of people. Peter barely saves the lives of a family in a car that Octavius tosses and a woman trapped in another crushed vehicle.. In another sequence, Spider-Man and the Green Goblin pound and throw each other around so violently that they actually smash through walls and down through the floors of an apartment building. After this battle, Peter ends up tattered and bloodied.

An innocent individual gets caught up in the violent mix and dies. Peter tries to help, and his hands get covered in blood. Peter is involved in several highly destructive battles with the various villains and is always accused by J. Jonah Jameson—who’s positioned himself as an Internet media star—as being a “web-headed war criminal” and the like.

Peter carries M.J. at one point, jumping off buildings and swinging in front of subway cars, etc. She is terrified by Peter’s death-defying hurtling movements. The crowds around Peter, M.J and friend Ned get more angry and violent, too. A protestor throws a brick through Aunt May’s window, for instance.

Peter is shot by police officers.

No f-words, but there’s one unfinished exclamation of that stripe that’s cut off. There are four uses of the s-word, seven uses of “a–,” and a handful each of “d–n” and “h—.” God’s name is misused nine times, including one pairing with “d–n.”

A scene during the movie credits features a man in a bar who is rather drunk.

Peter strives to change some people and help them transform their live for the better. Doctor Strange, however, is directly opposed to Peter changing the “intended” fate of any individual, suggesting that it would be better for them to die if that is their fated lot. “Their sacrifice means infinitely more than their lives.”

Fan Service is defined as: “Material in a work of fiction or in a fictional series which is intentionally added to please the audience.”

Under that definition Spider-Man: No Way Home is decidedly comic-book-movie fan service with a smile. It uses its multiverse (or Spider-Verse) plot device to pull in so many Spider-Man references—and weave so many loose, gossamer, past movie plot threads into a very tidy web—that you can’t help but enjoy it if you’re somewhat aware of all things Spidey.

If that’s not you, well, you’re probably leaning toward something else on the movie marquee menu anyway.

But, as is the case with most superhero movies, we have a few negs to note.

This film covers a lot of ground so it felt to my spider-senses to be a bit rote and packed with too many characters at first. But once it really started swinging—tossing about inside jokes and bouncing around with wall-climbing glee—viewers only needed to web themselves in and hold on for the ride.

From a parenting perspective, we hear some language (see above) that didn’t need to make the cut. We see a rather bloody death scene that could prove disturbing for little fans. The movie makes a few sensual winks—with Peter Parker parading around in nothing but a pair of boxer shorts at one point. And we deal with quite a bit of magical mumbo jumbo, ripping open dimensions and casting circling rune spells on masses of people.

However, if you and any kids or teens in tow can make it past the sticky bits, there are some very interesting lessons here about choosing the hard path of good over the corrosive and angrier things of life. And this pic’s overall message of redemption and sacrifice could easily lead to more thoughtful discussions when you stop for a burger on your way home.