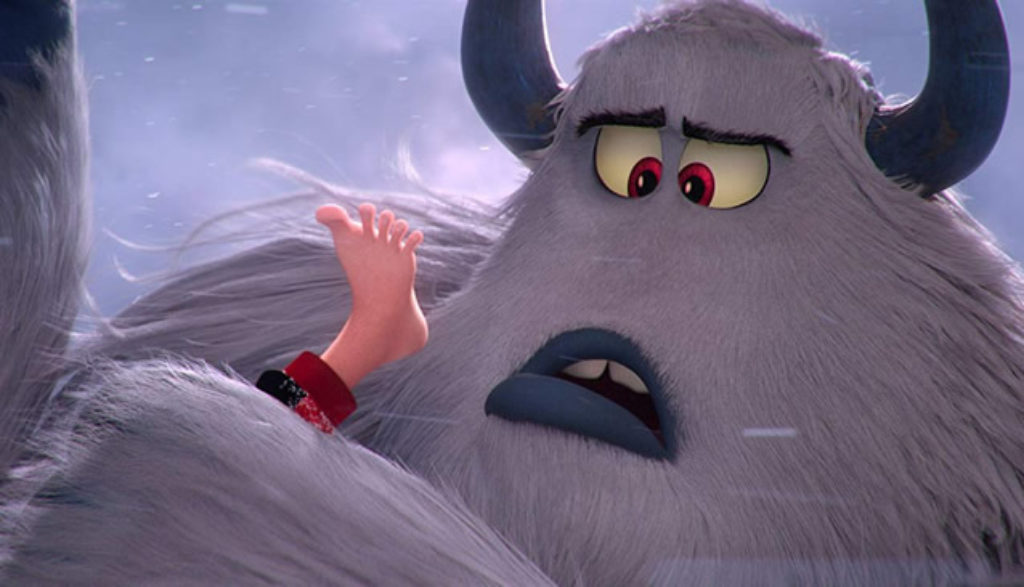 Migo is a happy and contented yeti, as yetis go. He loves being a part of his big-footed community in the Himalayan mountains. And like everyone there, he enjoys each day and knows his job.

Migo is next in line to become the village gong-ringer, once his father retires. It’s an important job, too. The gong-ringer flings himself across the valley and smacks that gong each morning with his own rugged noggin. It’s painful work—a job that’s flattened his dad’s dome and left him a few feet shorter—but, hey, how else will the glowing Sky Snail know that it’s time to rise in the east?

Yep, everyone knows his or her part by heart. And they know the rules, too. You see, their happy little yeti village has existed for hundreds of years, safe in the knowledge that all of their laws and histories are carved into small stones. The stones tell them, for instance, that they all fell from the backside of the Great Yak. The stones also declare that the yetis’ cloud-shrouded mountain sits on the back of a phalanx of wooly mammoths. And other great facts.

Those stones are kept and worn as a garment by the Stonekeeper—a learned yeti sage who reminds them all of their sacred laws and truths. In fact, one of the stone laws is never to question the stones. Ever. And Migo never would have dreamed of doing such a thing except … except for the fact that he saw something. Something unexpected. Something startling. Something … small.

One day while practicing his flying gong bonk, he missed his mark and wound up out on a mountainside where he saw none other than the fabled Smallfoot.

This tiny little creature (that some call a “hew-mon”) doesn’t really exist. Or at least that’s what the stones say. But Migo saw one. Its winged vehicle crashed down on the mountainside, and Migo saw the itty-bitty thing with his own big, round eyes. But by the time Migo ran back to the village to bring witnesses, all remnants of the crash had mysteriously slipped off the side of the mountain to be hidden away beneath the clouds.

The Stonekeeper says Migo must be mistaken. But when Migo keeps asking questions, The Stonekeeper banishes Migo from the village until he’s learned the proper lesson: Some questions just need to be pushed away and forgotten.

But Migo isn’t really in the mood for lessons. He wants the truth. And if that means traveling down the mountainside, past the clouds and down into the places where the stones said they never should go, well that’s exactly what Migo is going to do.

Because, well, some questions just have to be asked. Some stones need to be challenged. Even if that means Migo might never return to his safe and happy village ever again.

Smallfoot makes it plain that lying is wrong, even if it’s done with the best of intentions. It also teaches that everyone should feel the freedom to ask important questions, even if that means stepping out of our comfort zones to find the answers. “Questions lead to knowledge, and knowledge is power,” we’re told.

The movie also shows us examples of characters who step out of those comfort zones to meet and help others who aren’t like them. Both Migo and a human he meets, Percy, overcome their fears and begin to learn more about the other. They put their reputations, and even their lives, on the line to help each another. By film’s close, both yetis and humans determine that they won’t let their mutual fear of the unknown drive them to make destructive or divisive choices.

Percy, for his part, wrestles with the concept of being famous. He initially wants to fake a Bigfoot sighting in order to boost his online ratings and gain followers. But Percy eventually decides that it’s more important to protect Migo and his yeti community. “There goes my fame,” he tells his good friend Brenda after he turns away from viral online attention and offers of money. “But you have something better,” she replies. “Integrity.”

Though the word religion is never mentioned, you can still see a belief system in action here. It’s obvious in the yetis’ unwavering support of the Stonekeeper: They accept and submit to the stone laws he carries. And their entire understanding of themselves is woven into an elaborate creation story and history that often proffers religious explanations for scientific events (such as the sun rising each morning, for instance).

The Stonekeeper later admits that he knew the stones contained a number of purposely crafted lies. But he insists those deceptions were designed to keep the yeti safe from potential harm by hiding particular truths from them.

Migo, Percy and a few other characters get thumped around quite a bit in pratfalling, tumbling ways. Migo crashes down a rocky mountainside, for instance. He and his father bash head-first into that aforementioned large gong, as well as a huge stone column. And Percy’s small, vulnerable human size is played for laughs on a couple of bruising occasions—once, for example, when the large Migo tries to revive him and accidentally knocks one of his teeth out. In another scene, an unprotected Percy freezes solid in the icy cold, and Migo “helpfully” tries to thaw him by turning Percy on a spit over a roaring fire.

In other scenes, some yeti accidentally smash a human town and detonate a warehouse full of fireworks. Some of the frightened humans take an openly aggressive stance toward the yetis, pointing guns at a group of the furry beasts and firing at them with an armed helicopter. (The Stonekeeper downs the potentially deadly craft by throwing some of his stones at it.)

We see a carved montage on a stone wall that depicts a battle between humans and yeti. Yeti are shown dead on the ground with spears in them. The Stonekeeper tells a story of how humans killed the yeti and drove them away. A plane crashes into a mountainside and then slips over the side of a cliff to be smashed to bits far below. (Its pilot, however, survives.)

Percy offers to buy someone a drink at a local watering hole called the Yak Shak. We see the guy later with a metal mug in his hand.

Both Migo and Percy get hit by tranquilizer darts. In Percy’s case, it knocks him out cold. Migo stumbles around with a slightly loopy stagger after being drugged.

We hear a number of running toilet-humor gags throughout the film. For instance, some yeti members of the Smallfoot Evidentiary Society discover what they consider to be mysterious Smallfoot artifacts—one of which is a roll of toilet paper. They call it the scroll of invisible wisdom. Percy takes that roll off behind a snowbank at one point, and a watchful yeti quips about what happens next (off camera): “It’s not wisdom. And it’s definitely not invisible.”

Several yetis, as well as Percy, tell lies. The movie, however, makes it clear that lying isn’t a good or moral choice.

Smallfoot, however, is packed with more modern bromides for youngsters to chew on along with the remnants of their popcorn and gummy bears.

Always seek the truth, and be truthful, the film declares.

Ask questions, and don’t just believe what people tell you.

Celebrate your differences, and don’t fear the unknown.

And realize that being famous isn’t all it’s cracked up to be.

Those are, ostensibly, some good messages for small-footed shavers to walk away with. But here’s the thing: This film—with its stone-carved laws that turn out to be lies—could well be interpreted in some subversive ways, too, if you were so inclined.

It’s not hard, for instance, to see the film’s story as a kind of anti-faith screed. (I mean, do laws carved into stone slabs ring any bells?) And with the wrong tip of the hat, this movie could also seem to rail against authority or even encourage kids to challenge their parents or religious teachers.

That’s not to say that Smallfoot is trying to stomp in any of those rebellious directions. I enjoyed this pic. Taken at face value, I thought it was a well-made animated film that encouraged kids to be upright, curious and accepting of others.

Those are positive messages to chew on—just as long as you pay attention to how those other, more subtle subtexts here might be influencing younger viewers’ hearts, too.