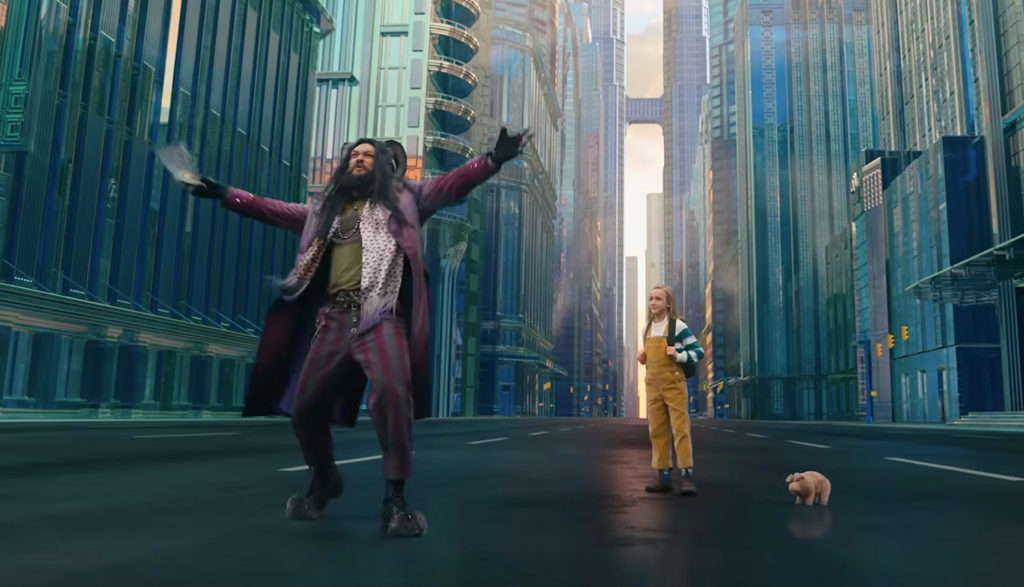 Bedtime stories rule—especially when your dad was once a famous outlaw.

But Nemo’s dad, Peter, wasn’t your standard outlaw. No, he and his partner in crime, Flip, were rebels from a realm called Slumberland. It’s the place we all go to when we dream—where the Bureau of Subconscious Activities (BOSA) design your dreams with care to guide you to exactly what you need. And as long as you don’t find the hidden doorways that connect your personally crafted dream to another person’s personally crafted dream, then there’s no problem.

For most people, staying with their own bubble is perfectly fine—in fact, most people don’t even realize they can leave it. But for Peter and Flip, jumping from dream to dream was what they lived for—as was being chased down by BOSA’s ever vigilant agents. And the biggest thing Peter ever discovered while traveling through Slumberland? Magic Pearls at the bottom of the perilous and monster-laden Sea of Nightmares that grant the wish of anyone who can get them and live to tell the tale.

But life marches on. Peter got married and had a child: Nemo. Soon after, his wife died, and Peter left those outlaw days with Flip behind him. Now, they’re simply stories told to rock his daughter to sleep. And life is good.

But then a horrible storm strikes, and Peter is killed, leaving Nemo an orphan living with her reclusive uncle Philip. Grief rules Nemo’s world, and she’d rather choke on her goodbye than utter it aloud.

But Nemo has a dream that reminds her of the story of those wish-granting Magic Pearls—pearls that could bring her father back to her.

Now, maybe that “goodbye” in her throat won’t be necessary.

When Nemo loses her father, she has to grapple not only with new emotions, but with a whole new world. She’s sent to live with her uncle Philip. And unfortunately for both of them, he doesn’t exactly know what to do with her. He’s grown content in his solitary life with few social interactions and fewer friends, and having a family is the last thing on Philip’s mind. That’s made apparent by Philip’s Google search on how to raise a child.

But even though Philip isn’t sure what he’s doing, he genuinely wants to connect with Nemo. (And as certain events reveal, his struggle to connect may not entirely be his fault.)

To be fair to Philip, Nemo doesn’t make bonding with her easy, as she doesn’t want to move on from the loss of the father. Nemo wants desperately to hold on to the happy moments and memories, treasuring them as experiences she’ll never be able to attain again. She’d rather just keep dreaming of those happier days forever. But an agent at BOSA tells her that their organization doesn’t give dreamers what they want; “they give them what they need.”

Ultimately, Nemo needs to move on and grow, but she’s afraid to let go of her grief, despite how it might be ruining her. In fact, the movie symbolizes her tenacious grief as a giant, squid-like smoke monster, constantly chasing and threatening to overtake her. However, she’s told by the BOSA agent that being brave doesn’t mean you’re not scared. Rather, it means “doing what you have to do, even when you are [scared].”

Ultimately, Slumberland reminds us that though grief or fear may weigh us down, we shouldn’t let it consume us—life must eventually go on.

There’s a certain mystical quality to the Slumberland realm that parents will want to be aware of here. Dreams are connected to one another and are constructed by an unseen powerful organization similar in function and concept to the Time Variance Authority from Loki. The organization creates dreams that are intentionally made to guide the dreamers to what they need.

Slumberland has many foundational dreams, and one of the dream varieties is titled “repression dreams.” It’s labeled with a Christian cross. We stumble upon a salsa-dancing woman who we’re told is having one such repression dream, and when she wakes up, she’s revealed to be a nun.

A woman says the most resilient thing in the world is the human spirit. Flip sings, “Don’t touch my horns, because they hold up my halo.” At a funeral, a man reads the last part of Alfred Tennyson’s poem “Crossing the Bar,” which makes a reference to meeting God face to face after death.

Another one of Slumberland’s dream varieties is titled “being naked in public.” We hear a reference to Sigmund Freud regarding repressing urges, and we discover that an agent of BOSA once worked in the “Oedipal dreams” department. A woman wears a tight dress which partially exposes her rear when she’s dancing.

Flip describes himself as an amalgamation between a “father figure” and “raw, masculine power.” A dreaming woman repeats the latter description regarding Flip. Flip says that he has everything he needs in Slumberland, including women. He also says that he’s going to find someone’s ex-girlfriend to do something with (presumably to take his mind off a stressful situation). We hear a reference to puberty.

Throughout the film, Nemo has many encounters with a “nightmare,” which, in her case, takes the form of a squid-like smoke monster. The nightmare frequently chases and attacks Nemo and Flip. We’re made aware that while you wake up if you die in your own dream, you actually do perish if you die while in someone else’s dream.

Nemo and Flip, furthermore, generally unleash destruction wherever they go while in the dream world (usually in order to avoid capture by BOSA). This includes destroying glass buildings, hitting a giant goose with a plane and a couple instances of characters punching each other. A character drowns, and another character almost perishes similarly. Characters are knocked unconscious from a variety of objects. Nemo throws a rock at Flip.

While in a dream, a lighthouse collapses, and a stormy sea sweeps Nemo under in a whirlpool. In another dream, Nemo’s bed grows long, spindly legs, crashes through a window and carries her to a destination.

God’s name is misused three times. “D–n” is also heard three times, and “h—” is used twice. We also hear “b–tard” once. Characters furthermore use “buttload,” “heck” and “what the flip.” They also use the word “applesauce” twice as a substitute for “a–.” Flip uses “pigs” to derogatorily refer to police officers.

Flip talks about finding a bar to drink at until he can’t remember things, and he claims Slumberland has all the wine he needs.

Flip steals a few items. He also catches flies out of the air and eats them. Flip retches and spits. Nemo lies to her uncle. A door between two different dreams forces characters to crawl in and out of the tank of a toilet.

Our dreams, Slumberland posits, are intentionally constructed by an unseen organization. Its goal? To guide us to what we need most in life. If that’s truly the case, I’ve got some serious questions about the one where a bunch of characters from Super Mario Sunshine were chasing me around my house trying to pinch me. But I digress.

Slumberland, at its core, tells a story of grief—both dealing with it and moving on from it. Given the movie’s ample jokes and colorful visuals, though, that message might initially be difficult to pick out—much like how someone processing a loss might pretend as if nothing is out of the ordinary. But just like the dreams into which we are thrust, what first appears normal becomes increasingly strange the moment we begin to process what’s actually happening.

Though Slumberland never loses its mystical charm and humor as Nemo and Flip jump from dream to dream, it still offers many compelling and heartrending moments that will point viewers to even a biblical truth: that there is a time for mourning and a time for laughing, and the former shouldn’t blot out the latter.

The film is loosely based on Windsor McCay’s early 20th-century comic Little Nemo in Slumberland. My biggest concerns about this movie adaptation include its vague spiritual connections between dreams and life’s meaning; some suggestive remarks; and occasional crude words.

But as a whole, Slumberland has relatively mild content and delivers a positive message to remind us that as fantastical a life lived in Slumberland might be, we’ll ultimately need to come back and face reality in order to grow and move on.