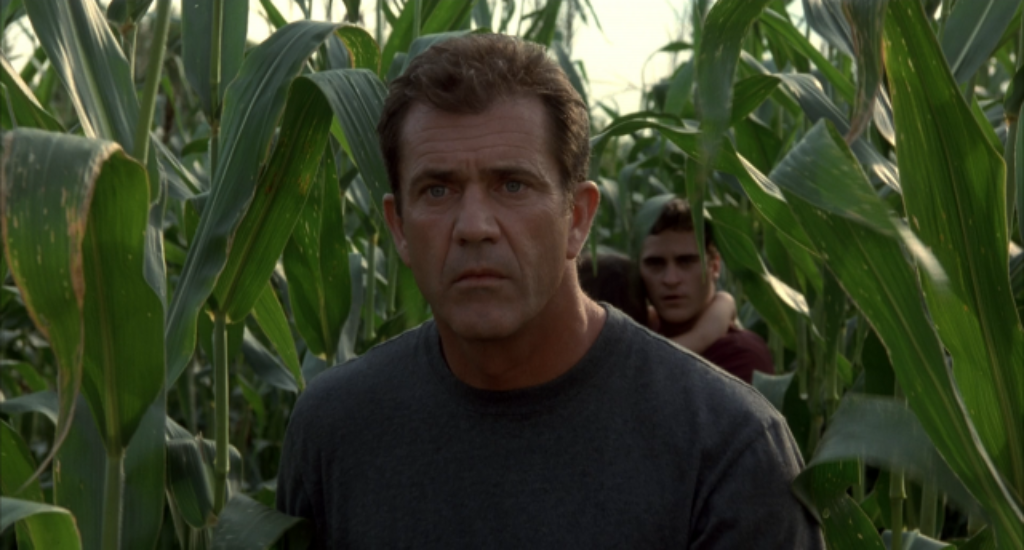 It’s been approximately six months since Graham Hess lost his wife to a freak accident. But that’s not all he lost that fateful night. As his mate’s life ebbed away before his eyes, so did the religious faith that made him a respected priest in his rural Pennsylvania community. This spiritual crisis is central to Signs, and is put to the test when Graham, his two young children and his brother wake up one morning to find mysterious patterns carved into their cornfield. Are they crop circles? Are they part of an elaborate prank? Or are they some sort of marker left by aliens as part of a pending invasion? Chaos and confusion ensue, not only for Graham and his family, but the world over. Graham’s son, Morgan, becomes obsessed with the prospect of extra-terrestrial life. Unprecedented events occur—from strange sightings to things going bump in the night—making it clear that the stuff of nightmares is no longer just science fiction.

positive elements: There’s a sweetness about the family relationships here that’s typical of Shyamalan’s work. It’s implied that the patient, kindhearted Graham adored his wife and is liked by his neighbors. He remains devoted to his children, and even offers tearful forgiveness to the man responsible for his wife’s death. After the accident, Merrill supports his brother’s family by moving onto the farm. Morgan looks out for his little sister, in one scene protecting her from a vicious dog and in another promising, “I won’t let anything bad happen to you.” As intruders threaten to invade his home, a rattled Graham takes comfort in telling his children the stories surrounding their births. (While very pro-family, this moment has a theological down side. It’s a sweet substitute for prayer that puts supreme faith in the ties that bind rather than in God.) Urged to frighten off predators with violent posturing and a string of cuss words, straight-arrow Graham finds it almost impossible to do so (after a funny eruption of censored emotion, a mild profanity eventually pops out). Some viewers will perceive a final turn of events as a pro-God statement and miraculous evidence of divine intervention, but to accept them as such begs a whole new set of philosophical questions about their far-out context.

spiritual content: In several scenes, “Father” Hess questions the existence of God. In another, he’s downright hostile toward the Almighty (faced with the prospect of losing his asthmatic son, he cries, “Don’t do this to me again. I hate you”). Mostly we see frustration and pain in Graham who, in his grief, would rather embrace the notion that there is no god at all than believe in one he perceives as too impotent or uncaring to prevent tragedy. Of course, there is another option that the film never fully explores: A loving, omnipotent Creator eager to walk through life’s trials with us (Psalm 34:18, Romans 8:26).

Graham tells Merrill that people who experience bizarre fortuity are divided into two groups—those who ascribe it to luck, and those who see it as confirmation of divine guidance. Merrill puts himself in the second camp (“I’m a miracle man”). He is disappointed when the big brother he idolizes responds in a defeated tone, “There is no one watching out for us, Merrill. We are all on our own.” Young Morgan feels the need to pray before mealtime, only to have his father lash out, “I am not wasting one more minute of my life on prayer!” Later on, Merrill confronts his brother, condemning his faithlessness. Morgan thinks God is responsible for the odd clearings in the cornfield. A TV anchorman reports that hundreds of thousands have flocked to temples, synagogues and churches, and ends his segment with “God be with us all.”

In a recent interview, Signs writer/director M. Night Shyamalan (raised Hindu before attending a Roman Catholic grade school) said, “Religion is some group saying their particular version of God is the right version, and that’s hard for me to accept. The world has become such a smaller place. It makes it hard for me to believe that the guy in Nepal and the little boy in Africa and the old man in Maine, all three of them with different versions of God, and yet maybe none of them is right. I just can’t believe that. There has to be some unifying thing.”

That ambiguous spirituality finds its way into the film. [Spoiler Warning] Even as we watch Graham putting his collar back on at the end of the movie, one is left to ask what his restored faith is really in. Is he just re-allowing himself the luxury of believing that things happen for a reason? Will he pull the collar back off if things don’t go his way next time? There is no sense that Graham shares a personal relationship with God that could survive Job-like circumstances. It’s a windblown faith based less on God’s remarkable and unchanging character than on how smoothly life is going at the moment. So even this “happy” ending will leave thoughtful Christians with an uneasy feeling.

violent content: For the most part, the story relies on jolts and suspense rather than onscreen conflict. Exceptions include Graham cutting off the finger of an adversary with a kitchen knife, and Merrill beating up an intruder with a baseball bat. After one of the family’s German Shepherds goes ballistic and threatens Bo, Morgan is forced to kill it with a barbecue fork (all we see is the impaled animal after the fact). The family listens intently as a dog barks ferociously, squeals in pain and is silenced. Flashbacks show a woman pinned to a tree at the waist by a pickup truck (a police officer’s description of her condition is more gruesome than what’s shown).

crude or profane language: Nearly a dozen profanities and several crude expressions. Swear words are spoken when a guilt-ridden teen confesses her colorful vocabulary to the former priest. The most disappointing use of profanity involves young Morgan exclaiming, “Bulls—!”

conclusion: Assisted by music evoking Bernard Herrmann’s classic Hitchcock scores, Shyamalan once again uses a B-movie premise to celebrate family relationships, ponder transcendent issues and creep us out in the process. If Field of Dreams and H.G. Wells’ War of the Worlds had a head-on collision, the resulting tangle would be Signs. Notice I said “tangle” and not “wreck.” This is not an artistic disaster. Quite the opposite. It’s an eerie, occasionally funny nail-biter built around sympathetic characters and unusually thoughtful themes. Imagine an X-Files episode crafted by a seminary student hooked on Camus and Nietzsche. It definitely stands out from most summer fare.

The good news/bad news of Signs involves its religious core. On one hand, Graham Hess’ spiritual crisis and ponderings about luck vs. providence are certainly ideas worth exploring. But it’s just nebulous navel-gazing. For viewers lacking a solid Christian worldview, arriving at conclusions will be like trying to put a jigsaw puzzle together without the help of a box lid photo. The pieces are there. Sifting through them may prove fun or therapeutic in the short-term. But the solution is elusive. People struggling with tragic circumstances and flagging faith need to know that the Bible is the box lid photo. Unlike this entertaining thriller, God’s Word does more than raise questions. It offers people mired in pain more than blind hope or circumstantial optimism. It reveals the very character of God.