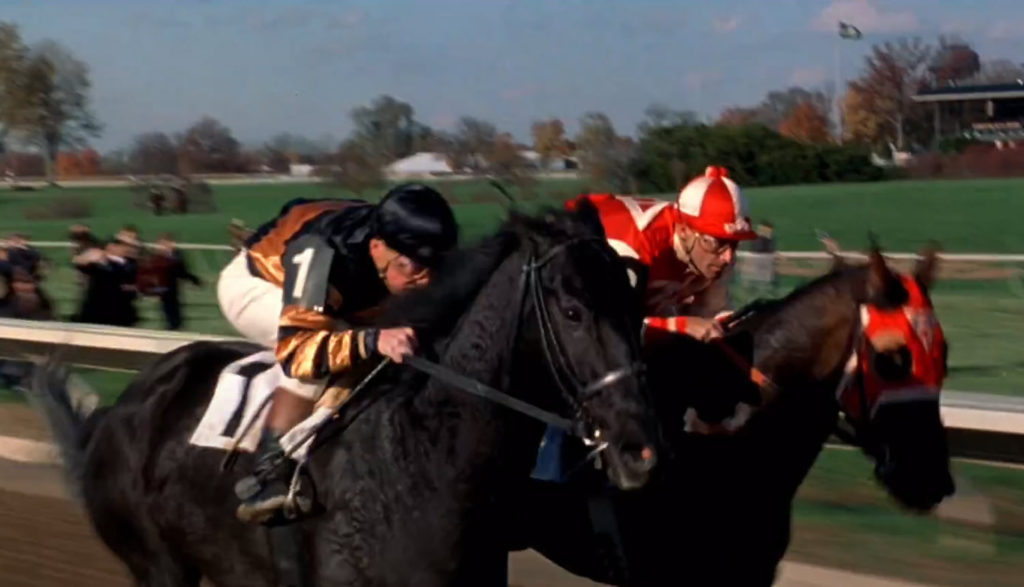 Based on a true story and a best-selling novel, Seabiscuit opens with an educational primer on the birth of Henry Ford’s Model T, and proceeds to explain (with distinguished narration by David McCullough) how assembly lines changed the way America did business in the early 1900s. Against that backdrop we meet ambitious bicycle repairman Charles Howard, who sees those newfangled buggies as the wave of the future. He invests in creating faster, more efficient engines, which pays handsome dividends and makes him a wealthy entrepreneur.

Meanwhile, somewhere in the untamed west, Tom Smith couldn’t be more different. He’s an aging cowboy who loves, cares for and understands wild horses so well that he’s dismissed as a quirky old homeless man. Then there’s Red Pollard, a 16-year-old boy being released by his parents to be raised by a wealthy horseman during the Depression (to nurture a gift … or leave them with one less mouth to feed?). Red learns about horses and life, but harbors bitterness toward his parents for enrolling him in this school of hard knocks and failing to keep in touch. To earn his keep, Red races thoroughbreds and gets beaten bloody in boxing matches.

Last, but not least, there’s Seabiscuit, a horse sired by greatness who is himself a classic underachiever on the track. An equine slacker. All of these lives—each in need of validation or redemption—are on a collision course with destiny. Charles buys the undersize steed, hires Tom to train him, and puts Red in the saddle. Through a series of wins and losses, they develop character and friendship in the pursuit of a dream.

Poor choices have consequences. A young boy’s stealth and disobedience lead to a terrible accident [Eph. 6:1-3]. Red lets anger and vengeance get the better of him, which costs him a race [Prov. 16:32]. There are also bold statements about fulfilling one’s purpose in life (“He has to realize what he was born to do”), finding value in God’s creatures despite flaws (“You don’t throw a whole life away just because he’s banged up a little”) and extending grace to others (“Sometimes all somebody needs is a second chance”).

When a rider falls behind, his friend drops back to make sure he’s okay, and to offer encouragement and inspiration. Seabiscuit’s team faces challenges head-on and asks only for a chance to compete, refusing to whine about bad breaks and injustices. Charles makes a speech about being a fighter and not quitting when things get tough. Both Tom and Charles are honest men of integrity. The kind, patient and sensitive Tom rescues a horse about to be put down, convinced that he can restore the animal to health and a place of usefulness (“Every horse is good for something”). He sees potential in both Seabiscuit and Red, and is eager to channel their restless rage constructively (horse and rider proceed to bond in a special way).

Meanwhile, Charles embodies optimism, ingenuity and a solid work ethic. Unlike pompous, cigar-chewing big shots, he is a respected businessman with compassion for the working man. He champions underdogs, saying, “When the little guy doesn’t know he’s a little guy, he can do great things!” Consequently, Charles is a generous, good-hearted employer who provides sharp contrast to Red’s previous bosses, a series of harsh slave-drivers pulled from a Dickens novel. Red’s dad reads from one such novel at the dinner table, quizzing the kids on literature and nurturing a love of the classics. The excerpt up for discussion involves rising to meet life’s challenges.

People sing “Rock of Ages” during a church service. A graveside funeral service is seen from a distance. Charles’ wife gives Red a St. Christopher’s medal for good luck.

Nothing explicit, but young men and women cavort in a Prohibition-era border town. Jockeys ride immodestly dressed girls piggy-back in informal races. A woman dabs liquor on her chest and a man licks it off. Dressed only in his underwear, Red entertains a call girl in his room (no nudity or sex onscreen, but she is shown from the back disrobing for him). A subtle wisecrack targets penis size.

Jockeys use whips to strike their steeds and, in more rustic contests, each other when riders play dirty. Red boxes in unofficiated contests so brutal that he gets cut, bloodied and knocked cold. Prior to a weigh-in, Red forces himself to vomit. He has a violent temper, challenging a bunch of guys to a street fight. When a horse gets spooked, it throws its rider who—with one foot caught in a stirrup—gets dragged on the ground until he experiences a violent, bone-crunching collision with a stable wall. [Spoiler Warning] Charles’ young son takes the car without permission and has a fatal crash (the wreckage is shown, and Charles grieves over the lifeless body of his child).

This is what keeps Seabiscuit out of the winner’s circle. Forty profanities include eight s-words and more than a dozen abuses of the Lord’s name (mostly “g–d–n“ and exclamatory uses of Jesus Christ).

Since people had no reason to fear lung cancer in the 1930s, cigarette smoking is commonplace. It’s the rare character who’s not shown dragging on one. Almost as frequent is alcohol use. People toast with champagne at classy social gatherings, or chug beer and hooch in sleazy dives. A radio announcer takes a swig of whiskey from a flask. Red drowns his sorrows in a shot of booze. When it’s facetiously suggested that Seabiscuit’s diet includes beer, fans send the race team cases and cases of Budweiser (there’s no telling how much it cost the folks at Anheuser Busch for this product placement … or what it will be worth in sales).

By its very nature, horse racing exists because of gambling and therefore is a tacit endorsement of it. In fact, director and racehorse owner Gary Ross has had a lifelong love affair with the track, telling the Los Angeles Times, “In high school I had a friend who was a mathematical genius and a compulsive gambler. So we went [to the races] a lot.” In the film, men and women wave racing forms and clutch dollar bills (this also occurs during Red’s boxing matches). Jockeys make side bets on the races they’re about to run.

Can you hear those thundering hoofbeats? That’s the sound of mature audiences racing to see a film of substance during a summer movie season dominated by sequels, explosions, special effects and bathroom humor. That film has arrived. Judging from the enthusiastic applause at the end of the packed-out screening I attended, Seabiscuit will be quick out of the gate and have strong legs. For one thing, it’s gorgeous to look at. Beautiful cinematography captures not only breathtaking countryside (with fall foliage to die for), but also snapshots of Americana taken from the dawn of the industrial revolution, to the Dust Bowl, to national recovery under F.D.R. Those nostalgic black-and-white photos and newsreel footage lend historical context to the story. Second, the movie’s themes (perseverance, friendship, redemption, seeing potential in brokenness, etc.) are pro-social and uplifting, and the characters are easy to root for. Third, the cast is brilliant. As good as Maguire, Bridges and Cooper are, the always reliable William H. Macy steals the show as a silver-tongued radio jock eager to break a racing story, and do it with more literal bells and whistles than Spike Jones. Add a smart script, unobtrusive musical score and exciting race sequences, and you have a very entertaining, heart-warming movie. But Seabiscuit stumbles. Had it reigned in the alcohol use and profanity (blasphemous uses of God’s name in particular), and spent less time at the brothel, this movie would’ve been sleeker, stronger and much more appropriate for families. A sporting effort, but upon closer review, Seabiscuit loses by a nose.