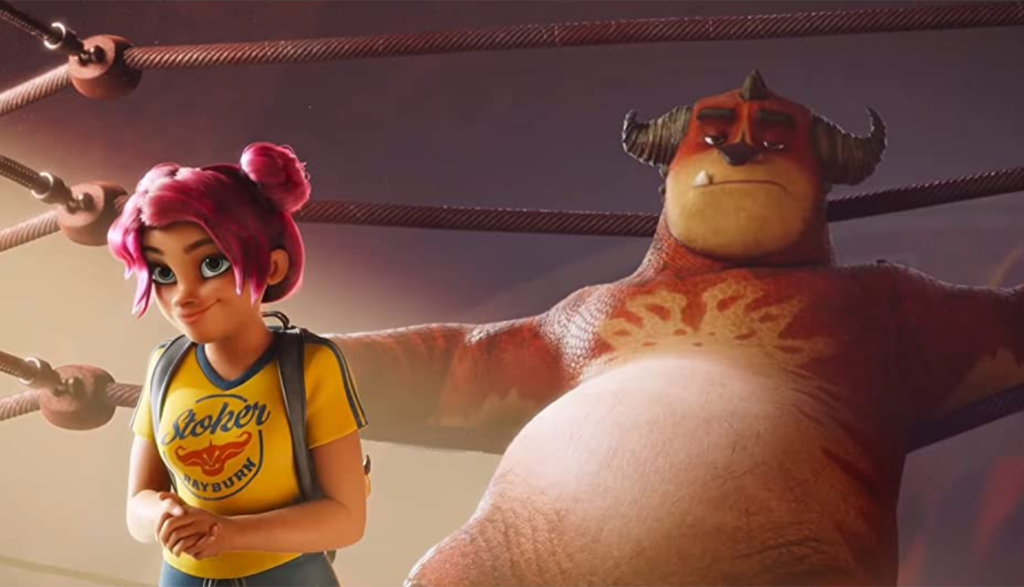 No, the globe’s biggest sport—and I mean, literally, the biggest—is World Monster Wrestling.

Back in the day, monsters—you know, really big, kaiju-esque monsters—never had a sporting forum in which to compete when they crawled out of the ocean or crash-landed on earth or whatnot. They had to be content with, oh, destroying Tokyo for the umpteenth time.

But that’s no longer the case. Thanks to the WMW, monsters the world over don’t obliterate cities and fight each other for bloodlust and vengeance anymore. They compete for glory and cash and the honor of their hometowns (which they conspicuously don’t destroy).

But as in any professional sport, honor can be somewhat … relative.

The hamlet of Stoker has one grand claim to fame: It was home to Rayburn, the greatest WMW champ ever, and his coach, Jimbo Coyle. Alas, the two were tragically lost in an airplane crash years ago (the airplane must’ve had a seriously large first-class section, but I digress), but Stoker has hopes of reclaiming its lost glory with another would-be champion: Tentacular, a gigantic blue, shark-headed beast who has (as you might’ve guessed) tentacles.

During a title bout, Tentacular is just as good as advertised. But just as he hoists the championship belt in triumph, he announces that he’s moving down the road to Sliverpool. Stoker has too much history attached to it: He has no interest in sharing glory with Rayburn, its dearly departed dynastic denizen. And hey, if Tom Brady can leave New England and LeBron James can switch teams three times between now and breakfast, why shouldn’t Tentacular seek greener, slimier pastures?

Because Stoker was counting on Tentacular, that’s why. The whole town bet its future on Tentacular’s future glory, including its stadium. Now that Tentacular leaving, Stoker may be forced to sell the stadium to Sliverpool, which means to tear it down and turn it into a parking lot.

But Winnie Coyle, Jimbo’s daughter, isn’t ready to stripe the parking spaces just yet. Stoker has one last chance to preserve its legacy and give a nice little eye-gouge to Sliverpool’s dastardly designs: Find a new monster-sized draw—in this case, a literal monster—for the stadium.

And maybe—just maybe—Winnie’s found one.

Sure, the self-stylized Steve the Stupendous has never won a match. Sure, he loses most of them on purpose (a monster has to pay the bills, after all). Sure, he’s never trained for a fight in his life.

But Steve owes someone a lot of money, too. And that makes him nearly as desperate as the town of Stoker.

And isn’t that what Edison always said? That success was 90% desperation?

No? Well, maybe Winnie, Steve and the town of Stoker should get ready to stripe that parking lot after all.

Rumble is really about the complicated heritage parents leave to their children, and how they can still embrace the past while also carving out their own legacies.

Steve, in truth, is actually Rayburn Jr. But weight of all his dad’s success was just too much for him to carry. “I love wrestling,” he tells Winnie. “I love my dad. But I’m not going to be him.”

Eventually, both realize that Steve/Ray Jr. is absolutely right. He can’t fill the shoes of his pops. And Winnie can’t replicate her own father’s success by following her Dad’s playbook by the letter, either. “We don’t have to be our dads,” she tells her monster-in-training. “We just have to be ourselves.”

That frees both to seek and find success on their own terms. And in so doing, Steve realizes at least a bit of his own inborn potential that he’d fled from for most of his life. He learns that while losing was a living, winning is better. He enjoys it. He enjoys the work and the challenge that comes with it. “You ruined losing for me,” he says. “And you know what? It feels good.”

And Winnie learns an important truth, too. While she works hard to preserve the stadium and thus her father’s place in history, Winnie’s mom reminds her of something important: “This stadium isn’t your dad’s legacy,” she says. “You are.” While the quest to save the stadium is still an honorable one, it’s less important than just being a person your parents can be proud of.

Winnie speeds past a merchant doing a yoga pose. He shouts “Namaste!” after her. When fans file into Stoker’s stadium, they pass a huge statue of Jimbo Coyle, and they touch his shoe in homage/for good luck.

An ancillary character spends the entire movie wearing just some brief-style underwear, displaying a body covered in tattoos. (The tattoos, apparently narrate Tentacular’s life story.) He starts talking about a tattoo he just got “right on my –”, but before he can finish (or show the camera his tattoo), people bustle in front of him and drown out anything he might’ve said.

During a match against Tentacular, a coach advises a monster to hit him in the tentacles. “You said ‘tentacles,’ right?” the fighter asks.

We hear references to “monster puberty” and someone receiving a “mani-pedi” from an unwilling participant.

As you might deduce from A) the movie’s title, and B) the movie’s plot, Rumble deals with violent in-the-ring combat. The wrestling we’re talking about has more in common with professional wrestling than anything you’ll see in the Olympics, with one big difference: The monsters fighting are actually fighting. Mostly.

Monster fighters punch and grapple and headbutt and sometimes gouge an eye. Occasionally, one fighter picks up another and spins him around the ring, helicopter style, and flings him into the audience. (Given most of these monsters judge their weight in tons, that seems like it’d be particularly dangerous for the humans in the audience, but no one ever seems to get crushed.) Common pro wrestling moves, such as leaping from the ropes onto an opponent or pile driving them into the mat, are common here, too.

Given the movie’s pro wrestling DNA, it’s no surprise that the action sometimes bleeds outside the arena, too (two monsters crash through a warehouse filled with shipping crates, knocking plenty of them down along the way), and illegal moves/weapons are utilized. (In what seems like an homage to “real” pro wrestling, one monster flings a folding chair at his opponent, and another is beaned by a crane pulley.)

Naturally, several combatants are knocked out—to be expected in a story about professional wrestling, but a discomforting element nevertheless in our more concussion-savvy age. And while wrestlers mostly seem no worse for their ringside efforts, the threat of permanent damage lingers. After losing a bout, one gigantic dog-like wrestler (King Gorge) spends time wearing a cone of shame. One of Steve’s opponents threatens to “end” him, and Winnie’s encouraged to throw in the towel to protect Steve’s well-being.

Winnie high-fives other folks with authority (judging from the winces they exhibit afterward). She and others push people. She tries to wake Steve up by lighting firecrackers. Someone whimpers as a tattoo is removed from his back.

Technically, none, though someone says “holy …” before the camera cuts to someone else saying “guacamole.” Characters do use the word “sucks”, and we do hear some name-calling. (Steve, for instance, is called a “sack of warm puke.”)

Winnie asks for “another root beer on the rocks.” Patrons at a bar drink from large mugs, which could also be filled with root beer—or not.

We hear about an illegal wrestling operation down in the town of Pittsmore, where Steve throws matches and his handler, Lady Mayhem, earns money from them.

King Gorge flings slobber all over the audience. A security guard confesses he’s been wearing his lucky socks for three weeks. When Winnie walks into an old training gym, she relishes in the smell of “sweat and feet. Really big feet.” Steve uses a derriere-focused wrestling move he calls the “Moon Boom.” There’s some conversation about vomit. Characters burp.

Walden Media is the production studio behind such family friendly movies as Bridge to Terabithia, Dora and the Lost City of Gold and the Chronicles of Narnia film series.

World Wrestling Entertainment is behind perhaps the globe’s most popular, most violent fake sport.

I never expected that these two entities would join forces to make a kid-friendly, wrestling-themed animated movie. But perhaps I shouldn’t have been surprised. After all, WWE stars such as Dwayne “The Rock” Johnson, Dave Bautista and even the late Andre the Giant went on to become big-time, family friendly movie stars. And nearly a quarter of the WWE’s fanbase is made up of kids between the ages of 2 and 17.

But fans of professional wrestling are getting older, according to studies, and certainly the WWE is looking to draw in a new generation.

As such, you could look at Rumble as a cynical, and violent, play for kids who’ve never heard of Hulk Hogan or Stone Cold Steve Austin … and don’t know the meaning of the word concussion. Catch kids when they’re 7, and they’ll pay good money to watch their favorite stars pretend to beat each other up when they’re 27.

But just as wrestling fans would (rightly) say that these stars are athletes, despite all the fakery, we can look at Rumble through more generous eyes, too.

The film offers some nice messages to kids about perseverance, courage during adversity and the importance of just having fun sometimes. But perhaps the most striking message is actually aimed at adults.

Steve loves his famous father, but he isn’t Rayburn. Winnie loves her dad, too. But when she tries to coach Steve like Jimbo coached Rayburn, it just doesn’t work. Eventually, Winnie’s mom offers some important advice: “Train the monster you have, not the one you wish you had.”

We parents all feel like we’re raising little monsters at times. And sometimes, our biggest frustrations come from the fact that they’re not like us. We think that if they just acted or learned or competed or even had fun like we did (or imagine we did), they’d be destined for great things. It takes time and experience and, sometimes, making lots and lots of mistakes to adjust our parenting styles for the quirky, crazy and unique kids God gave us—not the kids we wish we had.

Rumble teaches its viewers that it’s OK to be different—all without demeaning the importance of dedication or hard work. And that’s nice.

Certainly, Rumble isn’t destined to capture any world championships itself. It doesn’t have the narrative punch to go toe-to-toe with Disney’s or Pixar’s best. But on its own, admittedly violent terms, it does just fine. And it just might make viewers walk away from the screen and into their own rings with a smile.