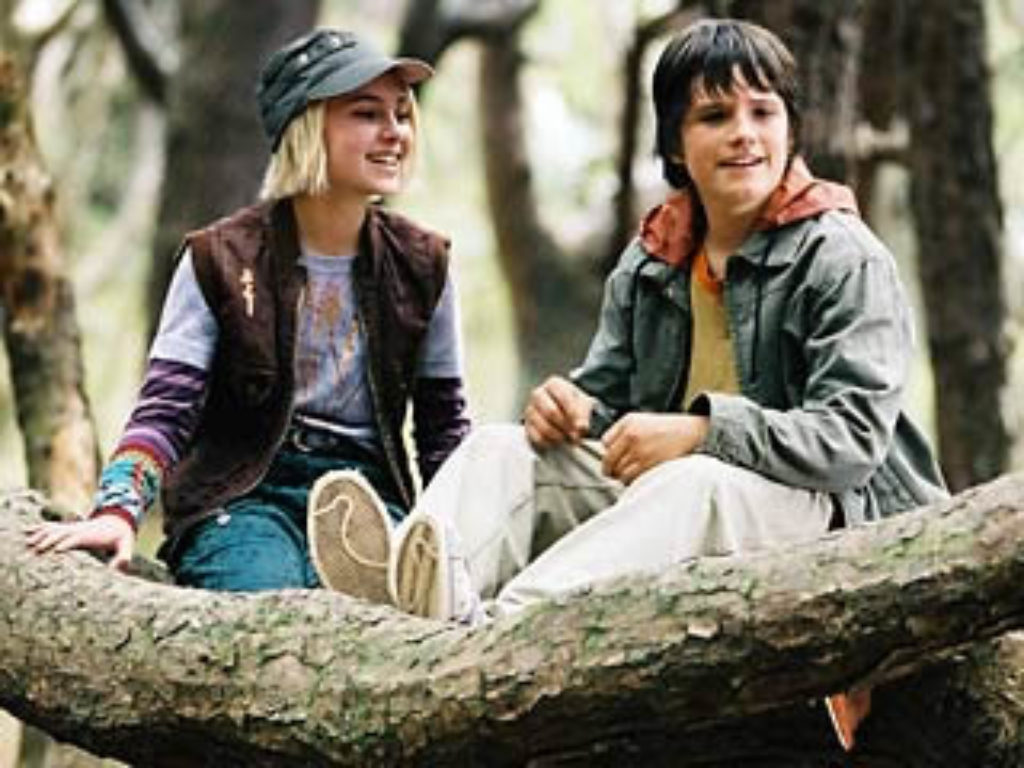 Bridge to Terabithia is based on the Katherine Paterson novel of the same name, which won the prestigious Newbery Medal in 1978. The book was made into a 1985 TV movie. Now it’s been developed as a theatrical release by Walden Media and Disney.

The film version follows Jess, an artistic seventh-grader growing up in an unnamed farming community that could as easily be Iowa as northern California. Jess is viewed as a nuisance by his four sisters and as an outsider at school, where one girl tells him, “You’re in the free lunch program, farmer boy!”

As the story begins, all of Jess’ energies are directed at winning a big playground footrace. But for all his early morning runs, he’s beaten in the contest by an eccentric and free-spirited new girl wearing ’70s-era pro-wrestling boots that Andre the Giant would have been proud to lace up. The race proves an unlikely start to friendship between Jess and Leslie, who encourages his creativity. “You’re really good at drawing, like, better than any kid I’ve ever seen,” she tells him.

Leslie is plenty creative herself and together the two conjure the magical world of Terabithia, a land of castles and trolls that appears when, in Leslie’s words, “you close your eyes but keep your mind wide open.”

In detailing their many get-togethers, the film offers a strong model for friendship in Jess and Leslie. The two are sensitive to one another’s problems, particularly their difficulties in fitting in at school. They also do all the little things that adults would hope to get right in their own relationships. For example, when Jess doesn’t volunteer that it’s his birthday, Leslie finds out and buys him an art kit. And sensing that the twosome has been leaving Jess’ younger sister Maybelle out of their plans, Leslie gives the girl her old Barbies as consolation.

We also see several broken relationships mended. Jesse Sr. is a sometimes gruff man, impatient with his son over the slightest misstep. The story’s main conflict shapes him into a more nurturing father, able to be soft-spoken and tender when his son needs it most. Likewise, after Jess mistreats Maybelle, he soon realizes his mistake, apologizes and works hard to win back her companionship.

There’s also a powerful case made for helping those who hurt you (a biblical concept found in Matthew 5:44). At school, Jess, Leslie and Maybelle learn to show compassion toward an eighth-grade bully named Janice, who is suffering at the hands of an abusive father. The three youngsters eventually see through Janice’s tough-as-nails act and find sympathy for her. Leslie even serves as Janice’s confidante. And it’s implied that in Terabithia, Janice returns the favor.

Leslie’s parents, though minor characters, are perhaps the story’s most upbeat ones. Both writers, they model creativity and work ethic for Jess when he helps the family paint a room. From them, Jess learns the Theodore Roosevelt quote, “Far and away the best prize that life offers is the chance to work hard at something worth doing.”

In many more small ways the movie throws its support to creativity and encourages viewers (especially children) to strive to do their best. When classmates tease Leslie for not owning a TV, the joke is clearly shown to be on them. (Leslie informs everyone that her dad thinks “TV kills brain cells.”)

One final positive theme is worth mentioning: overcoming fear. Though misunderstood and taunted both at home and school, Jess gradually comes to understand—in large part because of Leslie’s influence, but also because of a teacher’s guidance—that he can’t avoid doing what he loves (art) just because other people think he’s odd. He, in turn, works to instill confidence and imagination in Maybelle.

While Terabithia has the look of a mystical world, it is consistently shown to be the product of the children’s imaginations. It contains a “dark master,” “prisoners,” “warriors from the treetop provinces” and some exotic creatures. But there is surprisingly little dialogue between the children and Terabithians. For these reasons, perhaps, Terabithia doesn’t develop a mythic world on the level of, say, The Chronicles of Narnia. Neither does it embrace very much of the religious symbolism that often comes with presentations of these kinds of worlds.

That’s not to say there’s little spiritual content in Bridge to Terabithia. To the contrary. Leslie seems thrilled to attend church with Jess’ family. After singing “The Old Rugged Cross” and listening to the sermon, she gushes to Jess and Maybelle that the “whole Jesus thing is interesting … I think it’s beautiful.” Maybelle promptly rebuffs her with the seriousness of God’s judgment, explaining that “if you don’t believe in the Bible, God will damn you to hell when you die.” Leslie’s unconvinced. “I really don’t think God will damn you to hell … He’s too busy [creating] all this,” she responds, referring to His natural handiwork they see around them.

[Spoiler Warning] This seemingly offhand discussion takes on thematic importance when a central character is killed unexpectedly, a development that delivers an emotional knockout punch, particularly to younger viewers unfamiliar with Paterson’s novel. While “imagination,” not faith, becomes the preferred means of dealing with the emotional aftermath of death, the tragedy clears the stage for several discussions which extend to the characters’ ideas of salvation and the afterlife. Jess’ dad, trying to be comforting, ends up offering a pretty strong universalist message when he remarks that while he “doesn’t know everything the Bible says,” he’s sure that God would never send a good person to hell.

While innocent within its context, a scene in which a young female teacher takes Jess on a Saturday museum outing (just the two of them—and without parental permission) will raise the eyebrows of parents who are all-too-aware of how such behavior doesn’t fly these days. (And since the film isn’t presented as a period piece, I can’t give it credit for merely trying to reflect a simpler, more innocent time.)

One character is teased for her romantic crush and another for having a friend of the opposite sex. Jess and Leslie share a quick hug. Jess is on the receiving end of this schoolyard taunt: “Do you wear your sisters’ hand-me-down underwear, too?”

Terabithia is drawn as a kingdom of magical beauty, but it also provides some scares and battle scenes. When pursued by combo-creatures that resemble vultures and prickly, overgrown hedgehogs (think “rodents of unusual size” from Princess Bride), Jess and Leslie respond by throwing “grenades” at the enemy. An army of peanut-sized flying knights also enters the fray. The fighting remains pretty tame as combat victims simply disappear in a poof. Younger children may be frightened by the appearance of a giant and other fantastical beings.

Back in the real world, middle schoolers square off in bloody-nose inducing episodes that stem from teasing and other exclusionary behavior. In a schoolyard that seems largely unsupervised, Janice bullies pretty much everybody. On the bus a kid smears an open-faced sandwich on Jess’ back. And when a classmate directs a cruel joke at him, Jess punches him in the face. Jess also pushes Maybelle to the ground, and she lies there crying.

[Spoiler Warning] The accidental death that occurs is not shown onscreen.

Put-downs include “twinkie,” “loser,” “freak,” “new girl,” “beanpole” and “dumb eighth-grader.” Jess’ sisters refer to their brother and Leslie as “weird and weirder.” One character is said to be getting her “butt kicked.” When Janice charges younger kids a dollar to use the restroom, children respond with chants of “free the pee.” Leslie tells Jess that “boys’ handwriting sucks.”

While Jess, Leslie and Maybelle are easy to like, they struggle, as do most kids, with what adults might call “conflict management.” When Janice steals her Twinkies, Maybelle tells Jess, “You’re supposed to beat her up; you’re my brother!” Jess grumbles about his dad’s strictness, mockingly mimicking him.

In their biggest lapse in character, the three kids try to turn the tables on bully Janice by leaving her a fake love note from the school’s coolest guy. After lying to a janitor to gain access to a classroom, Leslie decides Janice’s desk must be the one “with the dried blood and dusty bones.” The prank ends with Janice in tears as she (and the rest of the school) discovers that the boy is in no way interested in her.

There’s also some chaos in Jess’ household. The children quarrel about their chores and over control of the TV. Jess’ parents are quick to dismiss his artistic talents and seem to favor his sisters. Jess declares that he’d “trade them all for a good dog.”

The Bridge to Terabithia is one of the more character-driven fantasy movies I’ve seen. To watch its magical kingdom take a backseat to the story’s real-world personalities is a refreshing departure from most middle-of-the-road examples of the genre (not Narnia) wherein campy dialogue serves only to inspire the hero for his next battle sequence, in which he’ll learn an important lesson about—you guessed it—bravery. Put simply, there’s more to explore here than in eight Eragons.

Jess and Leslie value kindness, compassion, forgiveness and not just courage, but moral courage. But by introducing the subject of death, the film will naturally force families to think a little bit harder before rounding up everybody including little Sarah Jane and heading to the mall. Families faced with their own tragic loss may consider Terabithia a bridge to therapeutic discussion. But parents whose children have been spared such pain may not be ready for a Hollywood tearjerker to introduce it to them. And, indeed, this coming-of-age tale about a dreamer’s positive influence raises more questions than it answers, and it leaves a lingering sadness.

Additionally, what the movie actually has to say about death and God’s role in it is careless at best. His justice is weighed against His mercy, but the dominant view seems to be based on the idea that mercy leads to absolutely no judgment and no disappointment. Thus, the Kingdom of God comes off looking a lot like the kingdom of Terabithia, a beautiful place populated by our imagination and about which it’s impossible to know much.