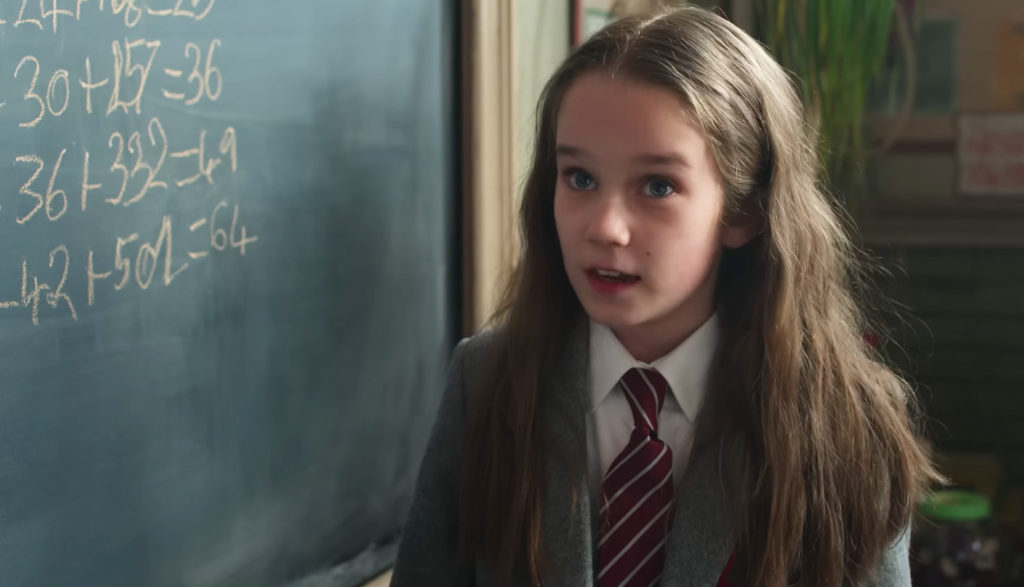 “My mummy says I’m a miracle. One look at my face, and it’s plain to see,” sing the children of the United Kingdom.

Well, all of them except Matilda. She sings a different song.

Matilda’s parents don’t like her one bit. Taking care of a child is just too much work for their taste. In fact, the girl’s father has to pay a fine because they forgot to enroll her in school! Now, Matilda feels like one burden too many to them, so her father calls up the cruel Agatha Trunchbull, Headmistress of Crunchem Hall, and tells her just what a “nasty little, troublemaking goblin” his daughter is.

But the truth is that Matilda is only a troublemaker for real troublemakers. She’s got a well-honed sense of justice, and her countless years spent reading books have given her Will Hunting-esque smarts. She’d rather call out injustice than slink by unnoticed.

But none of that matters to Agatha. No, to her, children are simply maggots (it’s the school motto), and they need to be squished in order to grow them into respectable adults. Until then, children are vile. They’re disgusting. They’re revolting.

But just how much can a child be called revolting before she decides to revolt?

Roald Dahl’s story expresses the biblical value of children and life (Psalm 127:3, 139:13), and the musical adaptation follows suit. “Every life is unbelievably unlikely, their chances of existence almost infinitely small,” a doctor sings. “The most common thing in life is life; and yet every single life, every new life, is a miracle.” And while the movie pokes a bit of fun at how parents tend to express just how special their newborn is compared to all the others, the endearing truth is that each life is a miracle.

Matilda exhibits an element of this as she crafts a story about a man and woman who desire to pull off the world’s most dangerous circus stunt—a feat that’s so impressive that the whole world comes to see it. But just before the act, the man cancels the event, exclaiming that his wife is pregnant. This causes the audience to roar in appreciation, and “the great feat was instantly forgotten,” showing that the creation of new life is much more of a miracle to the world than the most magnificent feat imaginable.

The musical also reminds us just how much impact parents can have on their children, another biblical value (Proverbs 22:6). As Matilda comes up with new ideas for her circus story, the happy ending takes a darker turn as Matilda grapples with the pain her parents and her headmistress have wrought upon her.

But it’s not just the negative people who can change a child’s trajectory—it’s the positive, nurturing ones, too. Miss Honey, a teacher at Crunchem Hall, takes Matilda under her wing, even when doing so might get Miss Honey in trouble with the headmistress.

Elsewhere, Matilda says, “When people do scary things to you, you can just do scary things back. A woman responds, “But Matilda, remember, two wrongs don’t make a right.” The film’s only flaw regarding this is that it doesn’t seem to resolve the lesson, as we don’t fully ever seen Matilda overcoming her desire to do wrong for revenge.

One song talks about the importance of rules, but its subtext informs us that, though rules are good and important, they can also become too legalistic and harsh.

Finally, Matilda challenges us not to let bullies domineer over others. We shouldn’t be bystanders; if injustice exists, we should identify it and seek to correct it.

Matilda is extremely smart—so smart, in fact, that she’s unlocked telekinetic powers. She uses these powers to move things with her mind, including a person at one point. She also uses her abilities to trick someone into thinking a ghost is attacking them.

The children at Crunchem Hall sing a song in Latin that mentions God. Agatha uses a plethora of negative religious and moral phrases to refer to students. She calls Matilda “evil incarnate,” and she calls children in general “demons.” We hear other spiritual phrases, too, such as, “leapt through the gates of Hades,” and “He should have thought of that before he made a pact with Satan and decided to steal my cake.”

Matilda tells a story to a woman, and though Matilda is only making the story up, she later finds out that it actually occurred. Matilda simply had a supernatural sense of it.

Matilda’s mother wears a dress that reveals cleavage. Two circus performers, a man and a woman, wear tights. When Matilda’s father learns that Matilda isn’t a boy at her birth, he laments that there’s “no sign of a winky-dink at all.” We hear a couple of references to a woman’s knickers. Someone is called a “floozy.”

Agatha believes that children are maggots, and they must be heavily disciplined all the way into adulthood—sometimes even in dangerous ways. She sends particularly disobedient students to stand in the “chokey,” a makeshift tiny shed filled with sharp objects.

Elsewhere, Agatha picks up a girl by her pigtails and throws her out of the school grounds; Agatha then orders another student to “check to see if that child is still alive.” (The tossed kiddo is shaken but otherwise unharmed). Agatha also picks a boy up by his ears and stretches his ears out.

Matilda tells a woman a story about two circus performers, one of whom fell from a high spot and broke every bone in her body. The female performer, Matilda says, later died while giving birth. Matilda’s father throws Matilda to the ground at one point.

[Spoiler Warning] Matilda uses her telekinetic abilities to hit Agatha in the head with a metal cup. She also lifts chains up in the form of a figure and smashes a group of chokeys. She also throws Agatha out a window with the powers.

A couple of characters belch, including an extended gastric eruption from a student named Bruce. The resulting gas bubble drifts across the lunchroom. A boy passes gas. The school’s motto is, “Children are maggots.”

Agatha is wickedly cruel to children, stating, “If the small ones don’t pee just a little when I walk into the room, then I’m failing as an educator.” Matilda’s mother calls Matilda “a good case for population control.”

Not all of the ideas our protagonists express should be followed. For instance, in one song, Matilda claims, “Sometimes, you have to be a little bit naughty.” She also wants to seek revenge on a couple of occasions. In another song, students exclaim, “If enough of us are wrong, wrong is right.” Parents should explain to their children why neither of these views are correct.

Matilda messes with her father’s hair product and his hat in retribution for his rudeness.

Roald Dahl’s children’s stories have captivated generations of kids. Whether it was The BFG, James and the Giant Peach, Charlie and the Chocolate Factory or Fantastic Mr. Fox, kids have been swept away by Dahl’s creative works.

But it would be unforgivable for us to list Dahl’s books without mentioning Matilda, the story of the telekinetic girl who stood up to unjust Miss Agatha Trunchbull. The story found a musical adaptation in 2010, and that musical’s film adaptation comes to Netflix on Christmas of 2022.

Roald Dahl’s Matilda the Musical illustrates many positive messages about the value of life, the importance of good parenting and opposing injustice. And while it’s not a biblical story per se, those values certainly echo Scripture. It’s true, many characters here are quite selfish and cruel (who can forget the scene where Agatha hammer throws a student by her pigtails); but their wickedness is juxtaposed against the kind and nurturing characters we root for.

This musical movie doesn’t change too much from its previous adaptations. The story’s biggest potential concern remains its harsh headmistress and Matilda’s telekinetic abilities.

And parents may also want to discuss the movie’s messaging regarding injustice with younger children. For instance, how can we discern when an authority figure is being unjust or cruel versus simply having us do something we may not want to do? And who can they go to for help if they experience abusive authority?

Overall, despite a couple speedbumps, Matilda the Musical provides a fable that illustrates some important biblical truths—catchy musical numbers included.