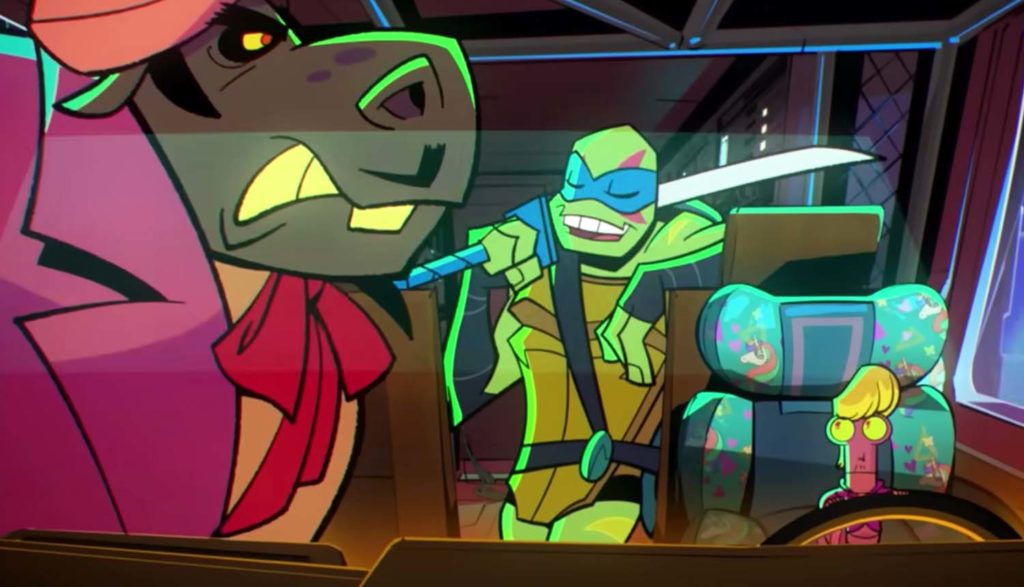 You may think you know all about the Teenage Mutant Ninja Turtles, but they’ve gone through a change. Those heroes in a half-shell are still gulping down pizza, and barking out a Cowabunga! on a rare occasion, but they’ve definitely left their ‘80s groove far behind.

The turtle bros. look different. They’ve got new gadgets and skills and they’ve got some souped-up mystical abilities, too (at least most of the time). Even their sidekicks are rolling with a different vibe. Sensei Splinter is kinda short and rotund these days. And April O’Neil is now Black and much more into kicking baddy backside than rocking a news reporter’s mic.

But no matter how they’ve all changed, they’ve still got a driving need to do the right thing and be the heroes that New York City, and the world, need.

And if a guy named Casey’s right, they’ll be needed badly.

Casey—a friend of the Ninja Turtles in the future—pops up and spouts news about a calamity in the making. Some deadly dudes called the Krang are about to escape from a prison dimension. If they have their way, the world will be destroyed. And it’s all going to fall in the current Turtles’ laps.

Casey points to a mystical/magical key to that dimensional prison door that can’t, I mean can’t, fall into the wrong hands at this point. Problem is, the drawing of the key that Casey produces looks a whole lot like the thingamajig that team leader Leo let the nefarious Foot Clan steal away with just this morning.

Looks like it’s time for the Turtles to fly into action and save the day. But when they do, they discover those Foot Clan baddies have already started the ceremony to open the mystical prison door and give Krang monsters a chance at a goopy, tentacled reign.

Well, nobody said saving the future would be easy…

The turtle brothers have some growing up to do here. And that’s the very thing we see happen. They eventually rally together, sacrifice for others and fight for their family members. And one of their number steps forward to sacrifice his life for his brothers (before being saved).

Each member of the group—including April and Splinter—use every strength and skill they can muster to save humankind from the death-focused aliens. Even in the darkest moments, the Turtles declare, “We still have hope!” And that becomes their rallying call.

There’s nothing faith-focused in the mix, but magical powers are at the core of things.

The anthropomorphic Turtles have always had enhanced strength, speed, agility and a humanoid form thanks to a mutagen chemical (elaborated upon in their origin story). But these new versions of them also have unexplained mystic powers. It’s never clearly defined, but they can imbue their weapons with this power. And we see them open transporting portals, create a time bridge and use expanded mystic forms and tech. (This new power is drained away by their foes for a short period of time. Again, unexplained.)

The Krang have their own seemingly magical power to physically invade people’s minds and bodies with tentacles and transform them (and some objects) into monsters.

The Krang were once sealed in a dimensional prison that can only be opened with a magical key. April attempts to destroy this key with everything from a Black Hole toaster to a jackhammer, but its magical protection makes it impervious to harm.

We see lots of thumping and slamming here, and perilous moments abound. Early on, the Turtles use their mystic abilities to bash vehicles, battle baddies and tear up surrounding scenery. And we see a future world that’s devastated and burning. One of the future Turtles expends so much mystical effort that he literally dematerializes into a cloud of matter.

But once the Krang appear in the present day and strip the Turtles of their mystical powers, the thumping becomes more mano-a-mano and physical. The Turtles, Splinter and April are all bashed and sent flying. (In fact, Leo is battered brutally at one point.) Aircraft are blasted out of the air. Vehicles are swatted aside and sent tumbling in explosions. And though we don’t see people killed, they are sent flying, too, and in some cases enveloped and turned into monsters with tentacles and oversized eyes.

Casey recounts a story that he was told as a child: “And behold, from their perch atop New York City, the Krang ripped open the sky itself. What came out was terror, and what rained down upon us was worse than death.”

And between the Krang control and absorption of a skyscraper and a huge organic spacecraft drawn in from another dimension, we begin to see that story play out as New York City is devastated and transformed into the burning, future place we caught a glimpse of earlier. (The action is very reminiscent of the destructive onslaught unleashed from a sky-portal in The Avengers movie.)

The Krang appear virtually indestructible, but chemicals that April stole at one point do have an acid-like corrosive effect on them. And we see one of their number impaled (bloodlessly) by a steel beam from a collapsing building.

Someone calls someone else a “bada– mystical warrior.” There are one or two exclamations of “oh god!” And someone makes a joke about the word “duty” sounding like “doodie.”

Early on, April lies to a scientist about interviewing him so that she can steal a bag full of his experimental chemical concoctions.

When Casey meets the Leo of the present, he notes the difference between him and the heroic Leo of the future. “You’re impulsive, you’re arrogant. And you don’t see that every decision you make could cost someone their life,” Casey blurts. (But this frank assessment also gets Leo to start thinking about his actions going forward.)

Rise of the Teenage Mutant Ninja Turtles: The Movie is based on the new Nickelodeon series of the same name. So the turtle bros. may feel a bit off kilter for older fans. This heroic crew has also stepped back from some of the earlier franchise show’s cheesy pizza humor, while taking on a whole lot of derivative action that’s very reminiscent of Marvel movies such as Guardians of the Galaxy, Doctor Strange and The Avengers.

That’s not to say it’s bad. It’s just different. There’s more mystical hoopla in the mix. And the space alien baddies—set on earthly domination—are darker and creepier than past martial arts-focused foes battling in city alleyways.

If young viewers and their parents are OK with all that, they’ll find quite a bit to enjoy here. It’s active and fun. There are nice lessons about working together; encouragement to help others; and moments that laud the support and love of family and friends. And the violence, while persistent and ominous, never gets bloody on screen.

To put it in a pizza vernacular (which, of course, is a very Ninja Turtle thing to do) this thin crust pie is tasty, but it might have a few more jalapeños in the toppings than you’d expect.