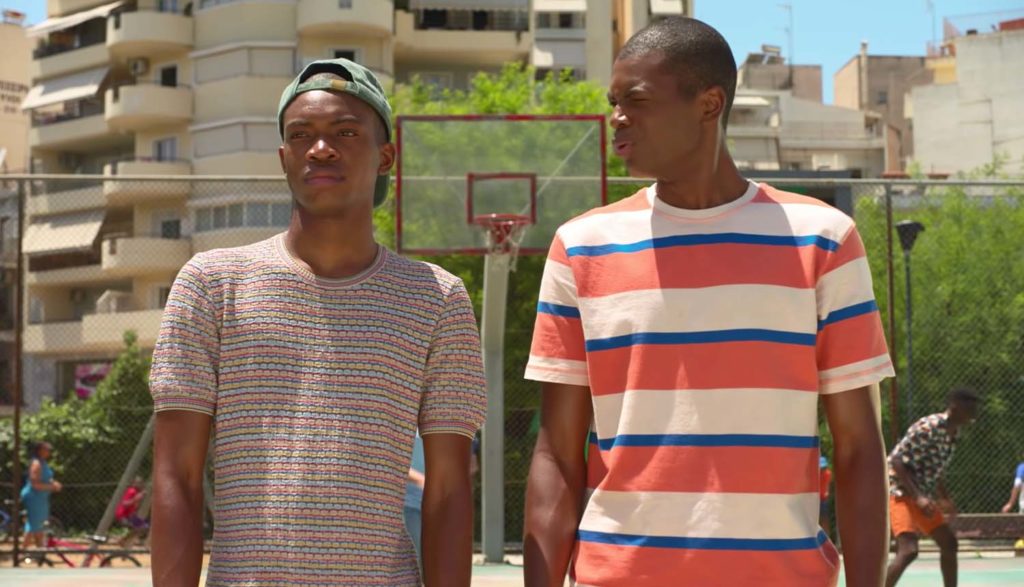 His parents call him Ubo. His mother says it means crown. And she adds that, “A crown that God has given, nobody can take away.”

Nice thought, that. But if Ubo wears a crown, it’s hard to see.

Ubo’s parents, Charles and Veronica, dodged police and prejudice to move from Nigeria to Greece. But Greece, it seems, doesn’t want them. Despite the family working for years to legalize their status, it runs into dozens of roadblocks. And it’s hard to find a decent job that way. So while Charles takes odd jobs wherever he can, Veronica and her boys sell sunglasses to tourists—always worried that their family is one step away from deportation.

It’s not easy, this desperate existence. While they came to Greece for a better life, their immigration status makes it impossible. The family’s four boys sleep in one room. Three of them sleep in one bed. The water sometimes stops running. Their rent payments are constantly late. And as Ubo and his older brother, Thanasis, begin to play basketball, they have to share one pair of shoes.

Ubo’s father, Charles, was initially reluctant to let his boys play—especially if they turn out to be good at basketball. Talent draws attention, after all. And the last thing this family needs is the government’s attention.

But Veronica thinks otherwise. “Let these boys be happy,” she tells Charles. Soon, Charles is out there with Ubo and Thanasis—encouraging them, praising them and peppering them with lessons that, he hopes, will stick with them all their lives. We fall to get back up. It’s not where you start, but where you finish.

Ubo started basketball poorly. He’s too slow. He can’t shoot. He struggles to keep up with his more instinctive older brother. But maybe Ubo—whose given name is Giannis Antetokounmpo—might finish all right in the end.

Spoiler warning: Giannis Antetokounmpo does indeed make something of himself. As of 2022, he’s won two consecutive MPV awards in the National Basketball Association and led the Milwaukee Bucks to a championship in 2021. Given how difficult his last name is to pronounce, some simply call him the Greek Freak.

But many made him feel freakish well before he took to the court. He and other members of his family were subjected to prejudice and mockery. Maybe that drew his family closer. Unquestionably they form a formidable support structure.

“Friends come and go, but families are forever,” Charles tells Giannis when he’s just a boy. He encourages his boys to be unselfish with the ball (though at first, it’s a soccer ball). “If one man scores, the whole team scores,” he says—a mantra his kids remember and repeat to each other later in their lives. And as Giannis and Thanasis explore their basketball skills more deeply together, and as they grow as players, we never see any hint of jealousy from either (even at stages where one is clearly better than the other).

Veronica might be, in some ways, the glue that holds the Antetokounmpo family together. In a real-world clip of Giannis accepting an MVP award, he calls her his “hero.” “If you have a good parent, your parent sees the future in you,” he says through tears. “And she always saw the future in us. She always believed in us.”

Giannis shows that he’s internalized his mother and father’s messages on the importance of family. As professional teams begin showing an interest in him, he insists that his family goes where he goes—legally. “We have to all be together. I will not leave my family behind.”

At times, that definition of family encompasses others. When a guy named Kevin Stefanides becomes Giannis’ agent, another high-powered agent soon swoops in to try to woo Giannis away, promising far more than what Kevin could deliver. But Giannis and the rest of the family refuse to leave Kevin’s services. “We can’t just abandon people who’ve worked so hard for us,” Veronica says.

The Antetokounmpos family also stresses the importance of doing things the right way, too. Yes, they’re technically illegal immigrants. But they never wanted or planned to be. As they try to achieve legal status in Greece, Veronica explains to the woman who’s supposed to be helping them that their passports were illegally confiscated by the European police, and in the process of getting those passports back they spent all their savings. The movie shows them doing everything asked of them to become legal residents, only to learn that it’s still not enough.

But despite all of their travails, the family expresses a sense of patriotic loyalty to Greece. “This country has given us free education, jobs, freedom,” Charles tells Giannis. “The rest, we’ll figure out for ourselves.”

The members of the Antetokounmpos families are Christians, and their faith is often on display. One of the first times that we see Veronica and Charles together, in fact, Charles is admiring the cross necklace that Veronica wears. Veronica tells her friends that Giannis means “John” in Greek, and that he’s named after the apostle. Veronica leads her boys in prayer, with them all leaning beside a bed and saying the Lord’s Prayer. And when Giannis heads to the United States for the NBA draft, his father says that he’ll be praying for him.

At the draft, we see more prayer: Veronica bows her head and prays in Greek. Giannis and Thanasis (who went to the U.S. as his brother’s chaperone) bow their heads in the arena where the draft is being held. After a pause, agent Kevin follows suit.

We see and hear references to other forms of spirituality, too. Charles and Veronica look on in horror as police pull an Islamic family out of their home and separate the children from their parents. In an effort to get the Antetokounmpos’ social worker to help them a little more, Charles reminds her that part of Greek culture came from Africa. “Zeus and Shango, the Yoruba god of lightning and thunder, they are the same,” he tells her.

Charles also uses spirituality as a way to frame the disappointments and perils of his boys playing basketball. He tells their coach that he knows that they started playing the sport too late: Normally, “You start young and hope the gods are smiling down on you.” They don’t often smile, he adds.

We see some mosques when he and Veronica are in Istanbul. Crosses hang on several walls in the Antetokounmpos apartment.

Veronica and Charles lie down on a bed together and gently look into each other’s eyes as Charles fiddles with Veronica’s necklace. We see a shirtless Giannis as he heads to the shower.

The Antetokounmpos family (and others) flee from police—who always seem to be sweeping the streets looking for illegal immigrants—quite often. While these scenes aren’t exactly violent, they can be jarring, and some whom the police do capture can be handled roughly. One officer runs over sunglasses Veronica was selling, smashing several pairs of them.

A group of Greek anti-immigration protestors sees Giannis and Thanasis on a bus. They rattle the bus and throw things at the windows.

Thanasis twists his ankle on the basketball court and falls down. People can be jostled during basketball games. We see a few violent slam dunks.

Rise is profanity free. The worst the language gets here is the very occasional use of words like “heck” and “suck.” Giannis is called “blackie” by an apparently racist opponent.

We see a glass of wine or two on tables during an NBA meet-and-greet.

We hear quite a bit about Greece’s apparent attitudes toward immigration and immigrants as the Antetokounmposes try to legalize their status. The government, the family’s social worker tells them, is “more concerned with keeping people out.” We see protests on news programs, and it’s insinuated that many of these protestors seem to be seeking not just national purity, but racial purity as well.

Giannis and Thanasis initially don’t tell their father about their first trip to the gym where they play basketball. When Charles finds out where they’ve been (because, it seems, Giannis is almost incapable of telling or sticking with a lie), he’s naturally furious. “If we were in Nigeria, you both would’ve been grounded for a week!” he thunders. (Shortly thereafter, Veronica calms her husband down and encourages him to let them play.)

While Charles and Veronica are raising four boys in Greece, we learn their firstborn, Francis, was left behind in Nigeria with Veronica’s own mother. When Giannis asks why they left him, Veronica tearfully says the trip to Europe would’ve been too dangerous: She’d heard stories about how European police were treating “even legal African travelers as if they were criminals,” and she was worried they would separate Francis from them. She said that they hoped to bring him over as soon as they were settled in Greece. But with the family unable to obtain legal resident status, that’s been impossible. “Sometimes we need to sacrifice for the family,” she says, and it’s still her dream to reunite Francis with the rest of the family.

Before the 2013 NBA draft, a representative from Nike shows interest in signing Giannis to a contract. She asks what makes him different from all the other NBA hopefuls in town.

He tells her about how he and his brother used to share a pair of sneakers. How he slept in the gym. How much his parents sacrificed to give him and his brothers a chance for a better future.

“We work harder, we run farther, and we are hungrier because we know the meaning of sacrifice,” he says. “God has been watching over us, and God will reunite our family again. I just have to play my part.”

Disney has made something of a cottage industry out of inspirational sports stories. And in that genre, Rise rises near the top of the list.

It’s hard not be inspired by the real story of Giannis Antetokounmpo (actually, a misspelling of his original Nigerian surname, Adetokunbo) and his family, and it gives families watching plenty to think about and cheer over. This movie is all about family, faith and fortitude, pressing on in the face of life’s trials, and getting up after being knocked down.

Giannis was knocked down plenty in his journey to the NBA. So were his brothers—two of whom followed him to the league. But the movie about their lives contains very few knocks against it. You’ll see more violence on an NBA court than you will here, and more sexual content in a halftime show. This truly is a film fit for the family—especially one with a basketball fan or two on the couch.

Decades ago, NBA star Charles Barkley told the world, “I am not a role model.” Now he watches Giannis from his commentator’s chair, and he praises this star who unabashedly is one. For those who say that the world of sports is filled with talented superstars who care about nothing but their next paycheck, and about no one but themselves, I give you with Rise.

This is a movie worth standing for.