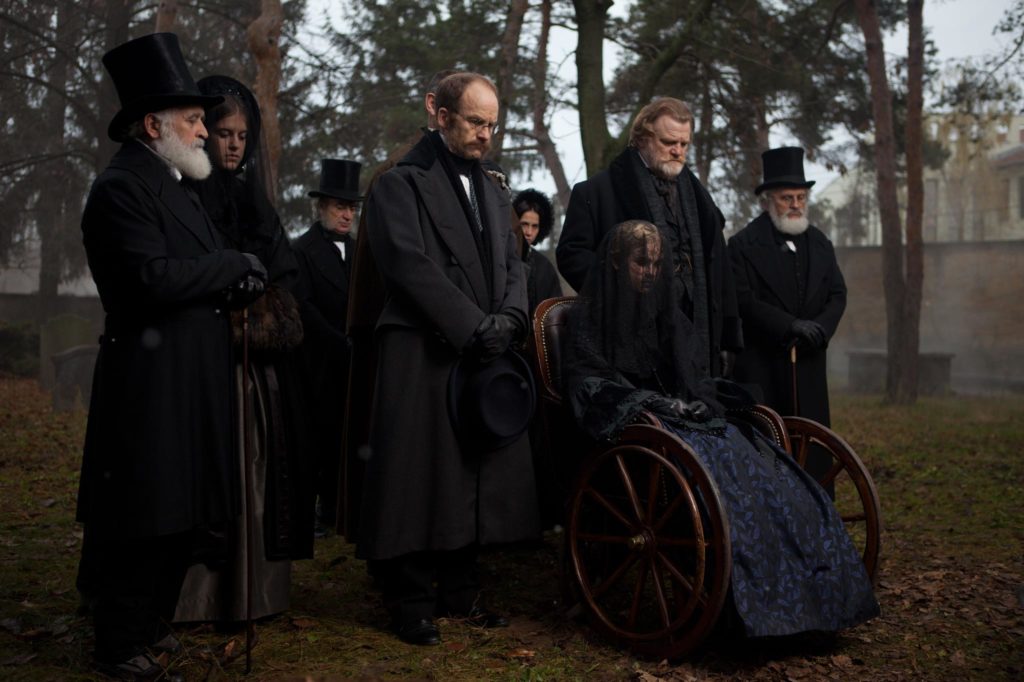 The alcoholic master of gothic horror needs a drink. But he doesn’t have two pennies to buy one. And getting more pennies so he can get more drinks isn’t as easy as it used to be: Falling in love with the beautiful Emily Hamilton has put the kibosh on Poe’s morbid, melancholy musings. Finally, Emily’s well-to-do father, Captain Hamilton, isn’t too keen on his daughter taking up with a poor poet.

Compared to what happens next, however, those troubles seem positively mundane.

It begins with the brutal murders of a mother and her daughter … a blood-drenched crime scene eerily reminiscent of Poe’s dark tale “The Murders in the Rue Morgue.” Soon, another victim is found—this time sawn completely asunder by exactly the same kind of dangling scythe Poe chillingly described in “The Pit and the Pendulum.”

The chief investigator on the case, a determined detective named Fields, makes the connection between the grisly crimes and Poe’s stories … and naturally begins to wonder if perhaps the writer has snapped.

He hasn’t, at least not in that way. And Poe and Fields soon realize that they’ll have to work together if they’re going to put an end to a madman’s murderous reenactments of Poe’s gory stories …

Poe’s got problems, to be sure. His grim fascination with death. His dependence on the bottle. His acidic arrogance vented through corrosive contempt for other writers. Beneath that crusty exterior, though, The Raven depicts him as a man who still has a heart.

Poe is shocked and horrified that anyone would want to translate his darkest imaginings into real-life crimes. And, simultaneously, the movie makes us think about the power that entertainment—be it books or games or movies—can wield over some people. Indeed, the killer eventually confesses that it’s Poe’s work that has inspired his murderous spree. (More on that later.)

Poe works feverishly alongside Fields as the pair tries to decipher clues about the murderer’s identity that have been left on (or sometimes in) each corpse. Both men, as well as Fields’ cohorts in the Baltimore police department, will go to any length to put an end to the killing.

[Spoiler Warning] Poe, in fact, makes the ultimate sacrifice, drinking a vial of poison in the killer’s gloating presence for information about Emily’s whereabouts. (She’s on the verge of death after essentially being buried alive for several days.)

The film suggests that Poe’s fascination with death is in part due to significant losses he’s endured, such as the slow deterioration and passing of his first wife. And as Poe’s love for Emily blossoms, the good feelings he has for her make it difficult for him to access the darkness that has heretofore fueled his writing.

Emily’s father tells her, “Your future happiness means more to me than I can describe.”

Referencing death, Poe makes an oblique comment about “the ways of God and nature and providence.” He also quotes part of his poem “Annabel Lee” to Emily. We hear these lines: “And neither the angels in heaven above/Nor the demons down under the sea/Can ever dissever my soul from the soul/Of the beautiful Annabel Lee.”

Poe observes that “madness, sin and horror” are the soul of a story’s plot. A handful of references are made to God, demons, damnation and hell. At one point, Poe says of the public suspicion he faces, “It appears to Baltimore I’ve become one of the demons I conceived.” And he mutters that he would “indenture my very soul to the devil” if he could write another “Tell-Tale Heart.”

The murderer delivers a message that says, “Godspeed Poe. Emily weakens by the hour, spiritually and physically.” Poe rages at his beloved’s abductor, saying, “I’ll send you to hell! Hell!” We hear a reference to an “opium addict atheist.”

A clue leads Poe, Fields and other police officers to a small chapel called Holy Cross Church. We see an unfilled grave prepared for Emily with her name and dates engraved on a cross. Someone on the verge of death utters a prayer-like plea, “Lord, help my poor soul.”

Emily wears cleavage-baring dresses. In one scene, Poe begins to untie her dress in front, revealing a bit more skin. The scene, which begins with a veiled verbal reference to oral sex, fades with him on top of her. Thus it’s implied that the unmarried couple has a sexual relationship.

Poe darkly quips, “If I would have known my work would have such an effect on people, I would have devoted more of my time to eroticism.” He gives a public reading of a poem, and a room full of female admirers (many sporting revealing dresses) fan themselves wildly.

Poe’s editor, who publishes many of the poet’s stories in the local newspaper, tells him, “People love blood. They love death.” Later, he reiterates, “People love the gory ones.”

The Raven takes those words to heart.

The first murder involves a middle-aged woman and her daughter, both of whom have been horrifically butchered. Repeated close-ups show throats and bodies that have been torn apart by a razor blade. Later on, the killer slashes a police officer’s throat, and blood erupts from the gaping wound as others try (unsuccessfully) to save him.

Meanwhile, the reenactment of “The Pit and the Pendulum” would feel right at home in a Saw or Hostel movie. The camera never looks away as the slowly descending blade swings back and forth over and then through a bound man—to bloodily eviscerating effect—eventually cutting him completely in half. And though it’s not as graphic, the murderer’s imprisonment of Emily under his floor also smacks of the kind of content you’d expect to see in a torture-porn film. Emily tries to kick and claw her way out, ripping her fingers up in the process. At one point, she pushes enough floorboards away to crawl out—only to have her tormentor knock her out and reincarcerate her. Several times she successfully carves holes big enough to get a breath of fresh air, and her kidnapper cruelly dumps dirt on them, making her gasp and cough.

Elsewhere, a corpse’s lips are sewn shut. After cutting the orifice open, investigators pull a pocket watch from the mouth. Another victim’s hands have been completely severed. Still another is dangled upside down in a chimney, and we glimpse blood dripping from her hand.

More “run of the mill” violence includes three men who are shot (one of whom screams as a doctor digs the bullet out), Poe getting hit hard, someone falling down a manhole and a gunfight in a foggy forest. Early on, Poe plays with a cadaver’s heart on his desk. He inspects a dead cat’s innards that ravens have just finished feasting on.

Poe is clearly dependent upon alcohol. He literally begs for a drink at a bar. When that ploy isn’t successful, he grabs another patron’s beer and knocks it back. He regularly quaffs from a steel flask he carries. Fields’ initial interrogation of Poe includes conversation about Poe being drunk the night of the first murder.

Someone at a pub says, “What brandy cannot cure has no cure.”

Poe savagely disparages anyone he sees as a competitor in the writing world—and anyone foolish enough to disagree with him, for that matter. He derides a lunk at a bar as a “mouth breather” and calls someone else a “mental oyster.” One of those men responds by mocking Poe and threatening to recite his own poem, “P‑‑‑ Off,” by I.P. Daily.

Any way you slice it, dice it or just plain cut it, The Raven is a mess of a movie. And that’s partly because director James McTiegue (who helmed V for Vendetta) and actor John Cusack (who portrays Poe) couldn’t quite decide what they wanted it to be.

The Raven feels more than a little like David Fincher’s gritty 1995 thriller Se7en. But its violence at times pushes much closer to modern torture-porn levels, especially the awful, outrageously gratuitous pendulum scene. Then a twist at the end brings Poe face-to-face with a killer who adores the writer’s twisted imagination—just like in Stephen King’s Misery. On top of all that, there’s an ill-fated romance between Poe and Emily that brings to mind Shakespeare’s Romeo and Juliet.

The final result is a muddled mash-up drained of any sort of plot cohesiveness or originality in order to make room for all the hideous, grotesque violence.

That said, a worthy philosophical tangent centers on a brief examination of the connection between media and violence. Detective Fields quickly connects the dots between the murders and Poe’s horrific tales, telling him, “What cannot be disputed is that your imagination is the inspiration for a horrendous crime.”

Poe retorts, “Is imagination a crime?” And in that response, he echoes a perspective that entertainment creators sometimes take in our modern world with regard to the influence of their material—namely that they are just telling a story or singing a song and can’t be held responsible for what those who engage with their ideas actually do with them. Yet we do see Poe, perhaps inadvertently, own up:

“I’ve concocted you,” he tells the killer.

“I couldn’t agree more,” comes the reply. “I am your crowning masterpiece.”

It’s too bad, then, that the question of whether Poe should be held responsible quickly evaporates onscreen, almost as if the movie’s makers couldn’t quite face the fact that their artistic creation might also face the same kind of scrutiny.

What doesn’t fade away is the spooky, violent psyche of one of America’s most morbid cultural contributors. His blood-smeared fingerprints are all over the screen, never mind that even he would be shocked at how explicit his vision can appear when removed from the realm of words and thrust into the harsh light of the big screen.