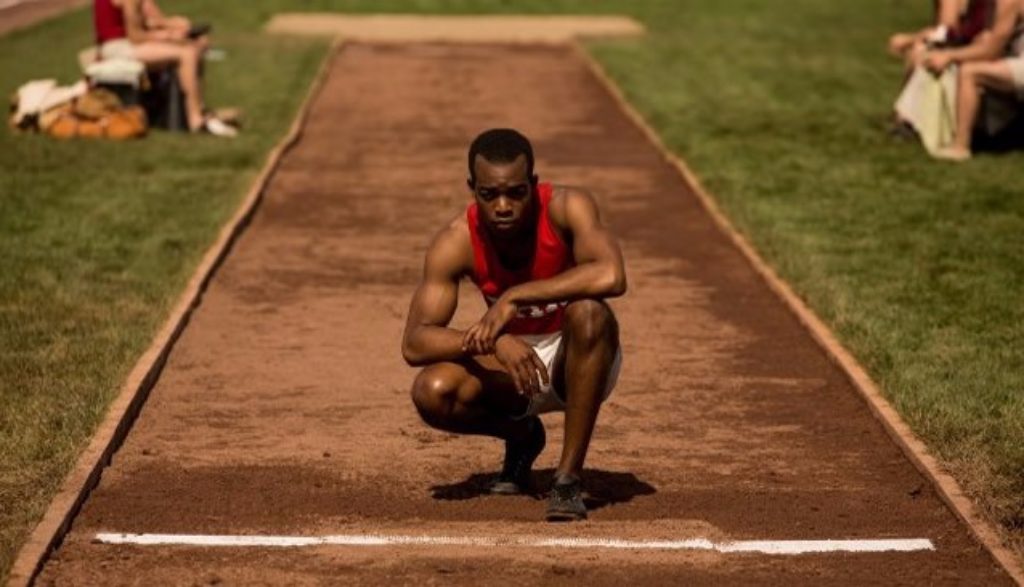 What does equality—real equality—look like? How will we know when we’ve attained it?

It’s been more than 150 years since the United States’ Civil War, 50 since the country’s great Civil Rights struggles of the 1960s. And yet we still live in an age of wage disparities and immigration debates, of controversial police shootings and #OscarSoWhite boycotts. Racial tension is still with us in the 21st century. Equality has been elusive. And perhaps it always will be.

Except on the track, where time and tape are the only arbiters of the ultimate meritocracy.

Jesse Owens knows something about inequality. It’s the 1930s, after all—an age when work is scarce and lucky breaks are as rare as steak dinners. Granted, he’s luckier than some black men of the day, but he’s largely made his own luck. At the age of 6, he was picking 100 pounds of cotton a day. And even though he’s not in the fields anymore, he works wherever and whenever he can—at a gas station, a grocery store, always for a little extra cash to pass on to his out-of-work pops, a few dollars to give to his longtime girlfriend, Ruth, and their young daughter.

But not even hard work can pave all roads. As a black man in a still deeply segregated country, he knows he’ll deal with more discrimination than his white peers. Blacks are shuffled to the back of the bus, directed to “colored” entrances, barred from communal drinking fountains. At Ohio State University, where Jesse enrolls to run track (without the benefit of a scholarship), football players shove black runners aside so they can use the showers first. Indeed, Jesse is often treated as if he were a lesser being.

But on the track, there’s no segregation, no angst, no depression. Just 100 yards of gravel and the click of the clock.

“Out there, there ain’t no black and white,” Owens says. “There’s only fast and slow.”

Jesse’s fast—so fast he set a world record in high school. So fast that he may give Ohio State’s running program the credit its coach, Larry Snyder, has fought so long to get. America may have its problems, but it loves its winners, and Jesse has winner written all over his flying feet. And if he wins enough, his feet might just carry him all the way to Berlin to compete in the 1936 Olympic Games.

But Germany has its own agenda for the Olympics. The Nazis rule the country now, and its capital is strewn with swastikas. Already the Roma people are being rounded up and sent to concentration camps. Signs in shop windows say “No Jews or dogs allowed.” Adolph Hitler wants to turn the games into a public relations spectacle—an event that cements Germany’s primacy in the world and speaks to the racial superiority of this self-styled Aryan nation. The Berlin Olympics are to be a showcase for blond-haired, blue-eyed athletes, breathlessly filmed by Germany’s brilliant propagandist, Leni Riefenstahl.

But the Nazis can’t manipulate the track. Athletes can’t goosestep or salute while they’re sprinting. And the tape stretched at the end doesn’t lie.

Surely it’s not a spoiler to say that Jesse Owens was kind of a big deal. What he did and what he won and the records he broke during the Berlin Olympics in 1936 are a big part of his legacy, and Race is meant to be an inspirational story—all about how Jesse took his natural talents, burnished them to a fine shine, overcame adversity and became an athletic hero.

It works well in that regard.

But the film also suggests that Jesse was more than a good runner: He became a pretty good man along the way, too. He gives money to those who need it. He loves Ruth and (after an unfortunate wayward stint) offers to give up his running for her, just so they can spend the rest of their lives together. (In real life, that’s exactly what they do, incidentally; they were married for 45 years until Jesse’s death.) And when he’s asked by some to make a stand—to boycott the Olympics to protest Germany’s policies and strike a blow against the segregationists in America, too—Jesse wrestles with the decision, trying to discern what the right thing to do is. Eventually, of course, he decides to go—not just to earn himself a gold medal or two, but because he feels that the best statement he can make against both Nazism and racism is to beat ’em on their own track.

There are other heroes to celebrate, too. Ruth proves to be a rock-solid girlfriend and, eventually, spouse. And Larry Snyder isn’t just Jesse’s coach; he’s his friend—and he’s clearly willing to give black athletes a chance on the athletic field (unlike, the movie suggests, Ohio State’s vaunted football program of the day). Coach Snyder pays for his own ticket to travel with Jesse to Berlin—a supportive statement deeply appreciated by the runner.

In Germany, Jesse strikes up an unlikely friendship with Luz Long, a German broad jumper (which is what the long jump was called back then) who gives Jesse some advice and, after losing to the American phenom, is the first to congratulate him. “I wanted your best,” he says. “Otherwise, what is the point?” He publicly befriends Jesse—an outrageously inspiring act of courage in Nazi Germany. And in a private conversation with Jesse later, Luz blasts his own country’s government, saying, “If they want to use these games as a weapon, they can’t complain when it’s turned against them.”

Before Jesse leaves for Ohio State, his mother reminds him of a childhood trauma. “God spared you for a reason,” she tells him. It’s a theme that comes up repeatedly: People often tell Jesse that he was meant to run, and with his mom’s words ringing in his ears, Jesse no doubt understands that it’s God who is doing the determining.

A couple of winking nods are made to Sunday school. Jesse and Ruth are married by a preacher, with Ruth wondering whether a “decent Christian minister” would perform the ceremony—since they already have a child together.

Speaking of that baby, Ruth credits/condemns Jesse’s smooth talking way for getting them “into trouble to begin with.” But when Jesse begins making a serious name for himself, he’s temporarily wooed away from the steadfast Ruth. He first spies Quincella at a jazz club and is clearly attracted to her. A pal jokes, “You might get a girl like that to dance, but you’ll never get her into bed!” It’s implied that Jesse both dances with her (kissing and clutching) and beds her (sharing the same hotel room). Snyder warns Jesse, “The choices you’re making right now won’t even feel like choices until it’s too late.” And, indeed, soon thereafter, Jesse can be seen begging Ruth to take him back. (They’re married, it’s suggested, the next day.)

We see Jesse soaking in a bathtub. Guys are several times seen in locker rooms wearing only towels around their waists. There’s talk about sexual flirting, and Jesse suggests a friend take a cold shower. A German athlete speaks of a woman (who is a stranger to him) being compelled to get pregnant with him.

The threat of racially motivated violence pervades Jesse’s life. He and his friends are sometimes literally pushed aside by white students. And in Germany we see people roughly shoved into the backs of trucks. A soldier brusquely pushes Snyder aside. Quincella slaps Jesse.

Jesse and others drink beer with surprising frequency, even during the time that they’re training. Snyder often pulls out a flask and drinks from it. He drinks whiskey in his office, too, and at one point gets into a shouting match with Jesse that seems to be fueled by the alcohol. He injures himself when he drunkenly tries to do a broad jump.

When Jesse tells Snyder that he’s considering skipping the Berlin Olympics—taking a stand against racism both here and abroad—his coach is furious. He gave Jesse everything he needed to succeed on this great stage, he believes. He never was cowed by the racial attitudes of the day. He is, as much as anyone in this film is, color blind. He grabs Jesse by the collar and tells him that he never even thinks about race.

There’s an important lesson in there for all of us, clearly. Even if racism isn’t an issue for us—or, more fairly, we think it isn’t an issue for us—there’s a great deal more in play than our feelings in how we respond to perceived injustice and inequality. Behind every label—be it race or gender or religion—is a complex stew of experiences and beliefs that flavor everything we do and say. The issues involved in living in a multicultural society are not things that can simply be wished, or even legislated, away. And failing to figure everything out, we must be gracious with one another and just do our best at all times.

In that, the Jesse Owens in Race is a great example. Through his gift of speed, he was also given a tremendous responsibility—the responsibility to do the right thing for himself, his family, his team, his race. He’s pressured from all sides to choose well—which means, of course, doing exactly what each side wants him to do.

It’s Ruth who eventually shows him the way.

“I ain’t gonna tell you what to do, Jesse,” she begins. “That’s why you love me.” But she also reminds him again of the responsibility he was given along with his gift. And when Jesse begins fretting about what happens should he go to Berlin and lose, Ruth simply says this: “You were put here to run.”

Race loses speed when it injects foul and profane language into the story. And Jesse’s life is morally complex enough that it certainly deserves the PG-13 rating this movie was given. Parents will need to walk through some of his decisions and actions with their kids, should families choose to engage with this bit of cinematic history telling. And certainly some will, for it is an inspiring story and a great reminder that, while we were not all given Jesse Owens’ speed, we were all put here to do something. And we, like Jesse, should always try to do the best we can with what we have.