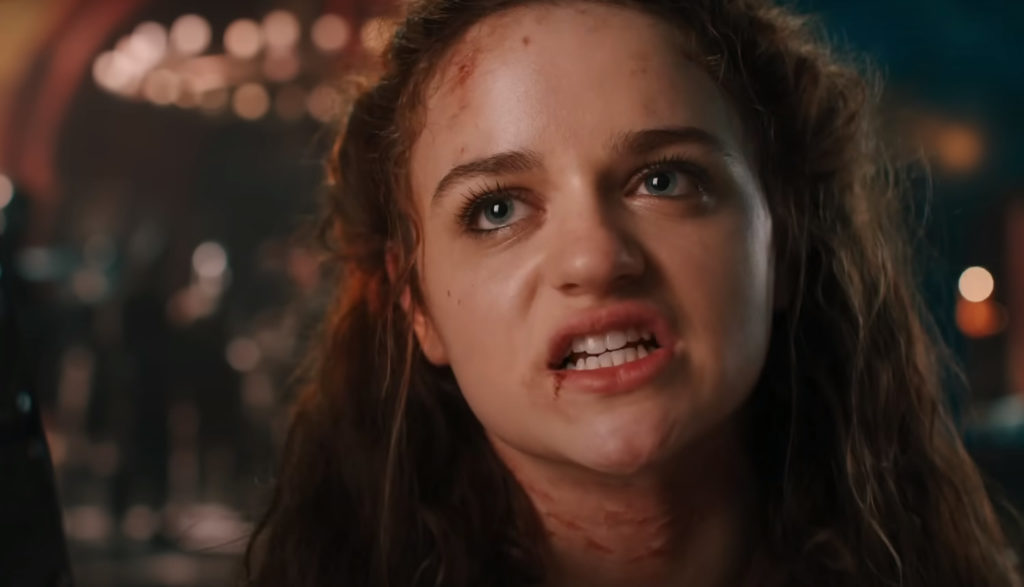 You could say the Princess got cold feet.

Not that she could be blamed. She never wanted to marry Julius anyway.

The match was political: The kingdom required a male heir and, alas, the King and Queen had none. So while the royals loved their girls dearly, those would-be heirs were legally barred from claiming the throne.

So the King did what kings have often done in such sticky situations: He paired his eldest daughter with an oh-so eligible and titled bachelor who’d inherit the throne when the time came. And it seemed like a decent match at the time. Julius came from a good family and was ever-so polite.

Still, the Princess had her doubts. And as she stood at the altar about to take her vows, those doubts crystalized into certainty. She couldn’t marry a man whom she didn’t love. (You could say she altared her plans.)

But Julius proved to be not so polite after all. He took over the King’s tower; arrested the royal family; and had the Princess herself captured, drugged and chained in the highest tower room he could find. The Princess will marry Julius. The kingdom will be his. And if not? Well, the Princess might as well scratch out her own will.

But the Princess is not so easily convinced. When a couple of guards come to drag her to the altar, she dislocates her thumb, pulls her hand out of one of the manacles and uses the chain to beat them both. One she stabs in the eye with a brooch. The other she fights with until he’s positioned right in front of the tower window.

But Julius has more than two guards in this tower: He has an army—not to mention a lethal lover who brandishes a barb-tipped whip. The doomed guard knows it.

“You think you’re going to make it all the way to the bottom?” the guard sneers.

“I’ll see you there,” the Princess tells him, and kicks him out the window. The Princess might’ve gotten cold feet. But she’ll leave plenty of others cold—or at least room temperature—before she’s through.

Well, we can praise the Princess for this much: She knows what she wants—or, more fairly, what she doesn’t want. Also to her credit: She wonders whether jilting Julius at the altar was the right thing to do. Should she have sacrificed her own happiness for the well-being of the kingdom?

“That kind of thinking right now won’t help,” says Linh, her friend and martial arts trainer. It’s a good reminder that there’s a time for introspection and weighing the choices we made … but not during crises. Sometimes you just need to move forward.

Linh says that “a true warrior is defined not by how she fights, but what she is fighting for.” The Princess is fighting for the twin noble causes of kingdom and family, and she and others are willing to risk everything for them.

[Spoiler Warning] After the events of the movie are resolved, the king overturns the law requiring a male heir claim the kingdom. A queen will do just fine. “Henceforth, the daughters of this kingdom make their own fate, just as my daughter has done today,” he says.

The would-be marriage is to be presided over by a priest or bishop of some sort, complete with pointy hat. But the clothes he wears and the symbols he bears (a star or sun, not a cross, hangs over his chest) suggest that this kingdom is in an altogether different time and world than the one we live in, where Christianity either does not exist or looks far different than it does here.

The Princess begins her adventure in a beautiful, weighty and restrictive gown—pieces of which are gradually torn away as she traverses down the tower. While nothing critical is ever exposed, we do see some bare knees and arms and cleavage. Other women wear tight-fitting outfits at times.

Julius has a lover he seems disinclined to give up. He and that paramour, Moira, kiss passionately as Moira grumbles about “that limp rag of a bride.” (Someone calls Moira a “harlot” to her face but doesn’t live to regret it.) Other men seem to treat women as possessions to do with as they will: Several men begin to sexually assault a female cook (an assault terminated before things progress too far), and one of the first guards that the Princess encounters would like to take advantage of the chained woman before him. (“I haven’t been close to the princess before,” he says. “There’s a reason for that,” the other guard says, suggesting the first has a bad reputation.)

We hear references to the marital duties that the Princess will be asked to fulfill as a wife, but those are fairly tame: The Princess accuses her father of pushing her into the “bedroom of a man I barely know.” She later says that as a wife, she would be expected to be at her husband’s “side every day, at his service every night.”

A shirtless warrior admires his bare-chested physique in a mirror. We hear a reference to a brothel.

[Spoiler Warning] When Julius feels that the Princess may be more trouble than she’s worth, he decides to marry Violet, the Princess’s prepubescent sister.

Sleeping Beauty? Yeah, not so much. This Princess could be called Slaying Beauty.

This fairy tale is filled with enough horrific violence to make even the original Grimm Brothers blanche (and trust me, those original fairy tales were pretty grim themselves). We see people hung, beheaded, shot (with crossbolts), sliced, set on fire and thrown off towering buildings.

Oh, and stabbed. Boy, are they stabbed—through the chest, through the neck, the leg, the jaw, the head. One man gets stabbed in the back of the neck by his own horned helmet.

And when no edged weapons are available, no matter: Fists and other blunt implements can do plenty of damage, too. People are hit and kicked (including the Princess), and a number of male soldiers are subjected to serious knocks to the groin. The Princess’s chains are particularly effective early on, and she also uses a massive sledgehammer on someone’s chest. (The blow is out of camera range.) A wooden rod, when broken, becomes a makeshift shish kebob stick. Casualties number in the dozens. The Princess is often covered in spatters of blood.

Admittedly, some of that blood is her own. She receives several wounds during her travails, some of which even slow her down a bit. As mentioned at the top, she dislocates her own thumb to squeeze out of her manacles, later popping the digit back into place. We see flashbacks to her martial arts training: No one’s hurt during such exercises, but we see plenty of swordplay.

Julius plots to slit the King’s throat once he marries the Princess. Julius is nearly stabbed in the head during a moment of passion. There’s a reference to holding someone’s still-beating heart. Someone nearly drowns. Several people are choked, either with whips or hands. Someone’s fingers are bitten.

The Princess tells one soldier to watch his mouth, as he’s in “the presence of a princess.” He fails to abide by that warning, uttering both an f-word and an incomplete c-word. (“I warned you about that mouth,” she tells the resulting corpse.) But others seem to learn from the unfortunate man’s profane mistakes.

Besides those two words, the rest of The Princess sequesters itself to more mild curses. We hear “b–ch” twice, “b–tard” once, “p-ss” once and the and the British profanity “bloody” once. God’s name is misused twice.

A few men drink heavily as they gamble in the tower dungeon. The Princess comes in, picks up a stein of grog and guzzles the rest down. “I needed that,” she says, putting the mug back on the table.

As mentioned, men gamble. One man urinates in a tower bathroom—a scene that goes on for some time.

And, as you might’ve guessed, almost every guy you see here is pretty slimy. Even the noble King takes his lumps.

Take The Princess Bride, moosh it with a Bruce Lee film and vet it through the staff of Ms. Magazine, and you’ve got The Princess.

The Princess is a frenetic feminist fairy tale, from the top of the tower to the bottom: The story begins looking remarkably, and intentionally, like Disney’s sleeping beauty, complete with her gentle slumbering expression and flowers adorning her elaborate headboard. (No worries about copyright infringement, given that 20th Century Studios is now a Disney subsidiary.) But the rest of the film is all about pushing not just soldiers, but the idea of Sleeping Beauty—a passive heroine whose only role is to lie still—out the window.

The Princess’s shredded gown could symbolize shredding the expectations of what a woman should be. The tower itself could be seen as a symbol as well, one that’s deconstructed as the Princess makes her way down. The villains or dupes embrace “tradition,” while the story’s heroes flout it.

And that’s fine! Some women are built to be warriors in the most (ironically) traditional sense. We all have our own talents, skills and passions that don’t always align with what are considered traditional duties. If a faucet leaks in our house, my wife’s the one to fix it. Meanwhile, I’m way better at grilled cheese sandwiches. And we’re both OK with that. If the Princess is a better at fighting than sewing, that’s just grand.

That said, the movie acknowledges just one type of strength: strength of arms. And honestly, that’s just a bit ridiculous. Jesus was strong when He didn’t fight back in the Garden of Gethsemane. Throughout the ages, men and women have shown strength that had nothing to do with flexing one’s muscles.

My great-grandfather supposedly killed a bull with a rock. My great-grandmother raised 14 kids in a two-room shack on the Colorado prairie. Tough? Yeah, I think my great-grandma was plenty tough.

Granted, we don’t look to movies like this one for introspective explorations of gender roles. Still, for all of its apparent feminist posturing, The Princess is pure escapism—and bloody, irreverent and profane escapism at that. While it’s not as problematic as it could’ve been, it’s certainly violent enough to keep any young princesses away from the screen.