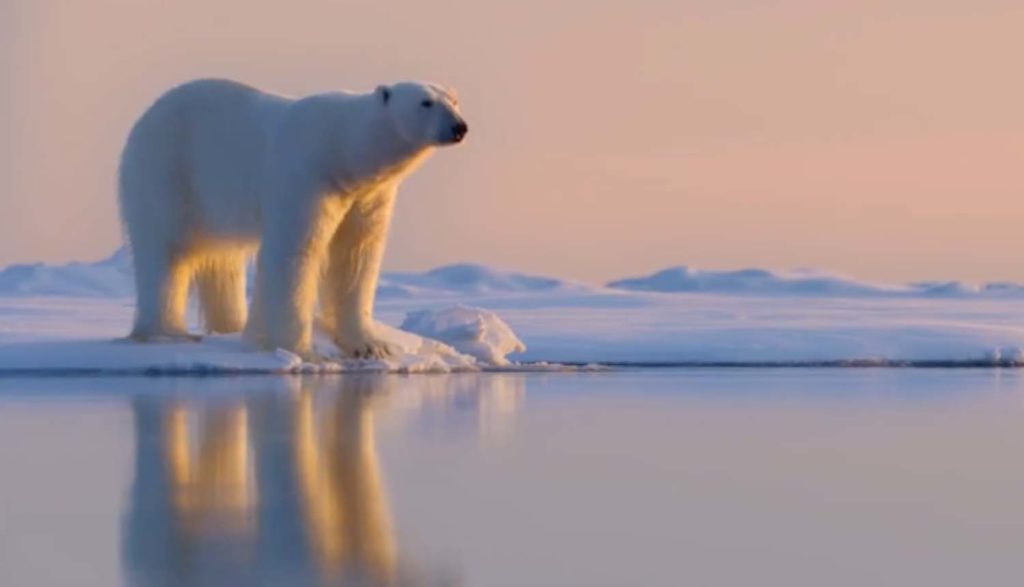 They say you can’t go home again. For the furry narrator in Disney+’s Polar Bear, that’s all too true.

Admittedly, home for a polar bear is always changing. The movie’s nameless protagonist admits as much. She calls her kind ice bears, and ice is hardly constant, even in the Arctic Circle—freezing and melting and freezing again.

But for her, that ice was home. As a cub, she and her small family—her mother and brother—spent their happiest times near the edge of that ice. There, in the spring, the seals would appear, sleek and slow (at least as they sunned themselves on the ice).

There, she and her kin would be relatively safe from their greatest threat: male polar bears, who often saw cubs as food, not family. On the edges where ice and water met, the ice was too thin to support the weight of a full-grown male but would hold up a mother bear and her cubs just fine.

Back then, in her childhood, ice meant safety, security, family—the very definition of home. And now that she’s grown with a cub of her own, that ice still is.

When she can find it.

The springs are shorter now. The ice melts faster. She and her cub must swim longer and farther to find food. Home, or what she always thought was home, is vanishing fast.

The life of a polar bear has always been dangerous: But her mother taught her how to deal with those traditional threats. Now, she faces a different kind of danger, and all her mother’s lessons don’t seem to do much good.

No, she’ll have to teach her cub some new techniques to deal with today’s dangers—even as she learns them herself.

Polar Bear comes with, as you might expect, a stark environmental warning: The climate is changing, the film alleges, and polar bears experience that change with a stark clarity that most humans aren’t privy to.

But the film is hardly all gloom and doom. Most of it is told in flashback—memories of when our protagonist polar bear was a kid. And in those memories, we see an anthropomorphic homage to family.

Our narrator bear (voiced by actress Catherine Kenner) calls herself and her brother’s mom their “protector.” “She was our only teacher,” she says. “I copied everything she did.”

And indeed, the cub does. In some remarkable footage captured by Disney’s documentarians, we see the cub mimic every move, every gesture of Mama Bear as she begins to teach them how to hunt seals. We watch her and her brother wrestle in the snow. While the family we witness is at least partly fictional—Polar Bear uses footage of several bear families—it’s touching to see how much mother and cubs seem to care for one another.

But all cubs grow up, of course, and the time comes when our narrator and her mother must part company. “Mom knew it was time for me to make my own way,” we’re told. But our narrator tells us that the lessons her mom gave her would stick with her forever. “She was with me,” the bear tells us. “She was part of every experience, every decision, every journey—part of the bear that I had become.”

Now, I can’t say that polar bears really love their moms just as much as human beings love theirs. Probably Disney can’t, either. But if this is an anthropomorphic fiction, it’s a heartwarming one—one that we human viewers can draw lessons from. Family, whether we’re furry or no, is something to be treasured (the movie tells us). We teach our own children, just as we learned from our parents. We’re pieces of a greater story when we’re part of a family, and that—perhaps even as much as the movie’s environmental message—is Polar Bear’s biggest takeaway.

And despite the movie’s dire underpinnings, Polar Bear ends even on a cautiously optimistic note. Though our narrator tells us flatly that the challenges in front of her own cub are daunting, she says, “My daughter will learn what it takes to be a great ice bear. … she will endure.” But just what home will look like by then, the narrator wonders.

None. The only mention of evolution, in fact, is in reference to the bears’ “evolving landscape.”

You can’t get bear cubs without a little (ahem) bear intimacy. But Polar Bear treats such interludes with the sensitivity of a relatively old-fashioned romance.

Our narrator discovers that male bears aren’t all bad when she meets a male bear just her age at the time (about 6 years old). They do nothing but frolic on the ice—their chilly date scored as a classical waltz.

A more serious encounter takes place a bit later, when a male bear twice the narrator’s size follows her—literally stalks her across the ice—for days. The relationship feels quite tense at first (the movie makes sure that we remember that male bears are no friends to cubs). But after this long-distance courtship, the narrator announces that she (to her surprise) isn’t scared of the male bear tracking her. The narrator leads the male up to a secluded spot in the mountains for a more intimate (and unseen) moment, after which we’re told she and the male parted company.

Unlike most other bears, polar bears are pretty much exclusively carnivores. And while the narrator’s family does dine on a bit of seaweed in a pinch, most of their other meals are a bit more messy.

We see the narrator’s mom pounce on a seal and pull it out of the view of the camera, and we’re told that the family ate loads of seals that spring. The narrator’s brother snags a bird that tries to escape from the bear’s jaws. The small family tries to dig into a dead, beached and bloated whale—but it takes a host of other bears to really find the delicious blubber underneath the whale’s tough skin. We see bears pull and eat the whale’s fat and gore, and some of the bears’ faces are pink and covered with innards.

A male bear scales a cliff to snack on some bird eggs and chicks, and he succeeds (on camera) in getting both. (The camera isn’t particularly close, but runny yolk and a squirming chick are both seen in the animal’s mouth.) The narrator tells us how dangerous male polar bears are to cubs, as well, though without getting into specifics.

[Spoiler Warning] Melting ice and male bears aren’t the only dangers polar bears face. After a particularly harsh winter, the narrator’s brother dies: We see his body lying in the snow as mom and daughter make their way without him.

None, really. Some might be concerned about the movie’s environmental message, and certainly the movie stresses that the climate is changing. But the movie’s overt activism is sequestered to a closing slide, telling us the arctic could be ice-free in the summer by 2040 and soliciting donations for a polar bear-centric charity.

The film itself—told, of course, from the perspective of a bear with little knowledge of environmental politics—just sticks to what the bear herself sees: The world she grew up with is quite different than the one she’s raising her own little cub, and many of the lessons she learned from her own mom just don’t work like they used to. There’s no mention (again, outside that closing slide) of humankind’s alleged role in climate change.

We all know that Walt Disney was pretty much the father of the animated movie. But you could make a case that he was at least one of the fathers of the nature documentary, as well.

Between 1948 to 1960, Disney rolled out 14 such docs, winning eight Academy Awards in the process. Granted, calling the films “documentaries” might be generous by some yardsticks: Walt Disney brought a sanitized version of nature to his viewers. But he was also instrumental in teaching countless young boys and girls something about the animal world—and in encouraging them to love it, too.

After a long fallow period, Disney resurrected its docs in 2008. And since 2010, Disneynature has released a new nature movie every year to coincide with Earth Day.

Most of these docs follow a familiar pattern: Using incredible and often staggeringly beautiful nature footage, these movies zero in on one animal “family,” as that family (be it penguin or panda, lion or chimpanzee) introduces us to that species, its environment and what each must do to survive. And while the films can come with an environmental message, it often takes a back seat to the familial drama that Disney wants to tell us. The philosophy: If you care for the family you’ll meet, you’ll care a little more for the world in which they live.

“We wanted to tell that story over 15 years because the important, overarching message of the film is climate change,” Jeff Wilson, one of Polar Bear’s directors, told Ashley & Company. “We have to tell that over a time scale that is realistic, you could never tell that in a two- or three-year period.”

For those who are wary of environmental messages, of course, this film (on Disney+) warrants a caution. And, of course, this is a movie about polar bears being polar bears—animals not known for their love of salad. That, and the brutal reality of the world around them, means that some animals die and are eaten on camera.

But while the polar bear’s Arctic Circle home is indeed brutal, it is beautiful, too. Polar Bear reminds us of that, treating us to sweeping, snow-covered vistas and water that looks like liquid crystal; to animals both tender and terrifying, cuddly and magnificent and curiously vulnerable.

Polar Bear does come with an environmental message, to be sure. But—intended or no—its greatest, most awe-inspiring message is reminding us of the beauty, power and wonder of God’s creation itself. As Job 12:7-10 tells us:

“But ask the beasts, and they will teach you;

The birds of the heavens, and they will tell you;

Or the bushes of the earth, and they will teach you;

And the fish of the sea will declare to you.

Who among all these does not know

That the hand of the LORD has done this?

In His hand is the life of every living thing and the breath of all mankind.”

In His hand is the polar bear, too.