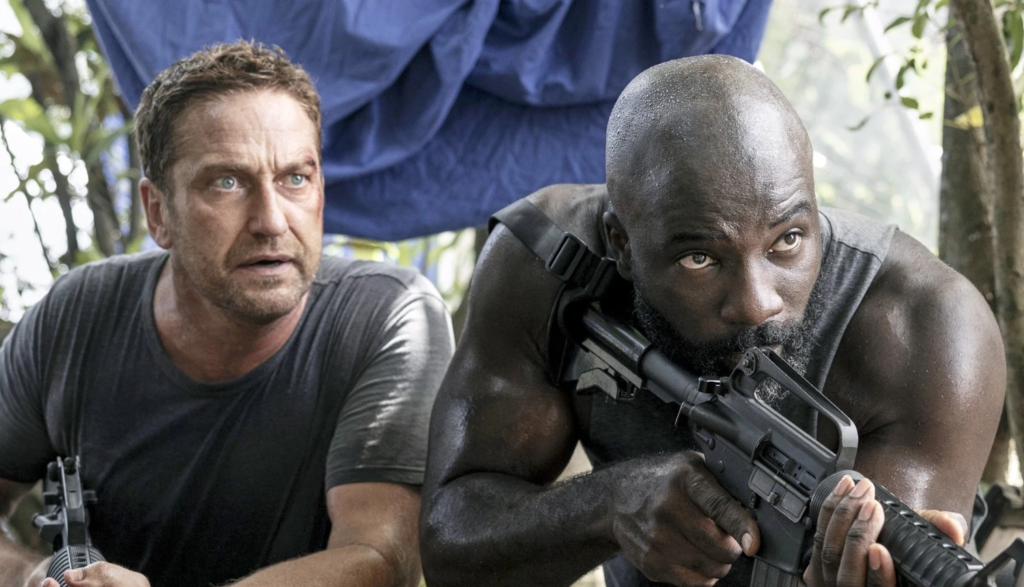 Capt. Brodie Torrance may look like any average, nice-guy pilot as he welcomes his passengers onboard. He may even sound like your typical dad-joke spewing dude while chuckling over the plane’s intercom system.

But he’s more than that.

Truth is, Brodie is pretty no-nonsense when it comes to the safety of his plane, his crew and his passengers. If some drunken idiot gets too loud and starts throwing punches during a flight, Brodie has the experience and wherewithal to handle the situation in whatever way is necessary. He knows his stuff, even when it doesn’t follow the exact letter of the airline’s policy-book law.

And in this case, that’s a very good thing. While piloting his Trailblazer Airlines flight from Singapore to Japan, his plane gets struck by lightning. That devastating electrical hit fries the plane’s avionics. It sends passengers cartwheeling through the cabin, two of them in deadly ways. And it causes the crippled plane to necessarily swoop toward the ocean below, with only 10 minutes of direct battery power keeping it aloft.

It’s Brodie’s skill alone that spots a fog-shrouded little patch of land in the Jolo Island cluster and miraculously sets the huge aircraft down relatively intact.

This, however, is only the tip of Capt. Brodie Torrance’s challenge. Because now he has a plane-full of passengers to care for on an island run by separatist’s and thugs—an island so dangerous that the Filipino government won’t even dare to send its army there anymore.

We meet one other person on the plane with military experience, a guy named Louis Gaspare. The problem is that Gaspare is a fugitive being transported back to the states for a murder he committed 15 years ago. (His police escort is killed in the lightning strike on the plane.) Despite that, Brodie decides to uncuff the man in hopes that his experience will help them all stay alive.

Gaspare and Brodie work together (risking their own lives) to fight off the aggressive killers on the island and save the plane’s passengers. Several other female crewmember risk themselves to help the passengers as well. Both Brodie and his co-pilot are motivated by pictures of family members they love.

A small group of people state that they are missionaries.

A flight attendant hides the flight manifest inside her shirt, keeping it from the separatists.

When lightning first hits Brodie’s plane, we see people cartwheeling around the plane cabin. Two passengers seemingly break their necks when striking hard surfaces. Brodie gets slammed into an overhead bin and cuts his brow, it bleeds freely.

All in all, though, the majority of injuries and deaths are caused by gunfire after the plane lands on the island. (That combat occurs between the island separatists, Brodie and Gaspare, and a well-equipped rescue team of hired mercenaries.) We see people bloodied, wounded and killed on a regular basis by men brandishing pistols and rifles. In fact, one large gunfight results in scores of people being shot. Several are killed with rifle shots to the head, causing large blood spatters. A large-caliber, high-powered rifle is used to stop vehicles and then to blast open people standing behind the vehicles.

Some characters fight hand to hand, battering and strangling each other. Gaspare and Brodie stab foes and slit their throats. Gaspare slams two guys with a sledgehammer, leaving them unconscious and bloodied (and possibly dead). Brodie gives himself up at one point to aid the group of passengers and he’s beaten by thugs. He’s also shot twice.

Passengers are murdered by the separatists for moving after they were told not to. A man is possibly decapitated with a sharp blade (offscreen) in one such case. We see a room covered in bullet holes and blood smears—indicating torture and murder—and watch a film showing missionaries that were held in that room.

There are several tense, perilous scenes where the large airliner veers about dangerously, nearly crashing. One of the fuel tanks doesn’t empty during one landing, making the plane a potential “firebomb.” One man gets crushed by the front landing gear of the speeding airliner.

Some 20 f-words spatter the dialogue, along with a dozen or so s-words and one use of “h—.” God’s and Jesus’ names are both misused once each (with the former being combined with “d–n.”)

As the flight begins, we see passengers drinking beer and glasses of champagne.

It’s implied that the separatists regularly hold innocent people for ransom and then either kill them or enslave them.

Some movies invite introspection, thoughtful discussion and maybe even spirited arguments over the deeper themes in play.

Plane is not one of those movies.

No, Plane is as straight flying and no-nonsense as its title suggests. This pic doesn’t mess about with character development, sub-plots or twisty story turns. It’s simply a tight, intense actioner. Granted, it sticks its landing with knotted muscles, gritted teeth and a grunting sigh.

But all the profane language and bloody mess tucked in its overhead bin still spills out on your head.