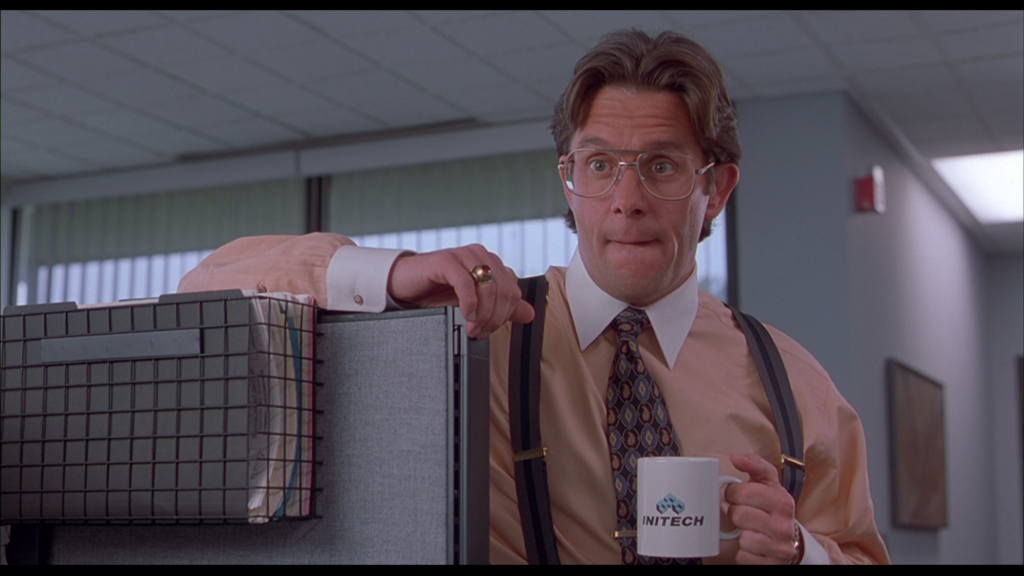 “Work Sucks.” That’s the line being used to advertise Office Space, a workplace comedy written and directed by Mike Judge (Beavis and Butt-head, King of the Hill). But instead of employing the witty insight of, say, the comic strip Dilbert, Office Space uses base fraternity humor apparently designed to reach collegians on the verge of trading keggers for cubicles. Beyond its profane explicitness, this anarchistic film vilifies white-collar workers (or paints them as idiots) while subtly endorsing alcohol use and sexual promiscuity.

After being pushed to the limit, Peter Gibbons (Ron Livingston), a young computer programmer, rebels against his employer with a combination of apathy, disrespect, irresponsibility and theft. But obnoxious attempts to undermine his career inadvertently improve his corporate standing. Meanwhile, Peter’s colleagues have their own professional psychoses. One guy attempts suicide after being laid off. Another maintains a long-running, obscenity-strewn feud with a photocopier. And an insecure mumbler with a stapler fetish eventually burns corporate headquarters to the ground. Finally, to get even for shabby treatment, Peter and his buddies steal by infecting the company computer with a virus that siphons off fractions of cents and deposits them into a personal account.

Not exactly what you want on your résumé.

In the midst of all this, Peter falls for a waitress equally frustrated with her job (Jennifer Aniston). She publicly resigns by hoisting her middle finger in the face of her condescending boss. This crude act pretty much characterizes the bitterness and disrespect of the film’s protagonists. While it’s easy to sympathize with their frustrations, many of these put-upon employees reveal an inner ugliness that makes you feel they deserve whatever they get.

The film’s frequent obscenities are compounded by explicit gangsta rap dubbed over scenes of corruption and violence, such as beating the daylights out of a kidnapped copy machine with a baseball bat. Beer is consumed at bars, barbecues and bachelor pads. There are also scenes involving female breast nudity and implied sexual intercourse, as well as references to sodomy in prison and “doing two chicks at the same time.” Perverse humor. The movie’s only redemptive moment finds Livingston and Aniston debating the ethics of the white-collar crime he’s just committed (a fleeting bout of conscience inspires him to take responsibility when it seems sure he and his accomplices will be caught).

With social satire getting increasingly mean-spirited, this movie is as monotonously cookie-cutter as the five-foot high cubicles and mindless beaurocracy it’s poking fun at. What could have been a savvy sendup suffers from a weak script, unlikable characters and sleazy humor. Discerning moviegoers will give Office Space a pink slip.