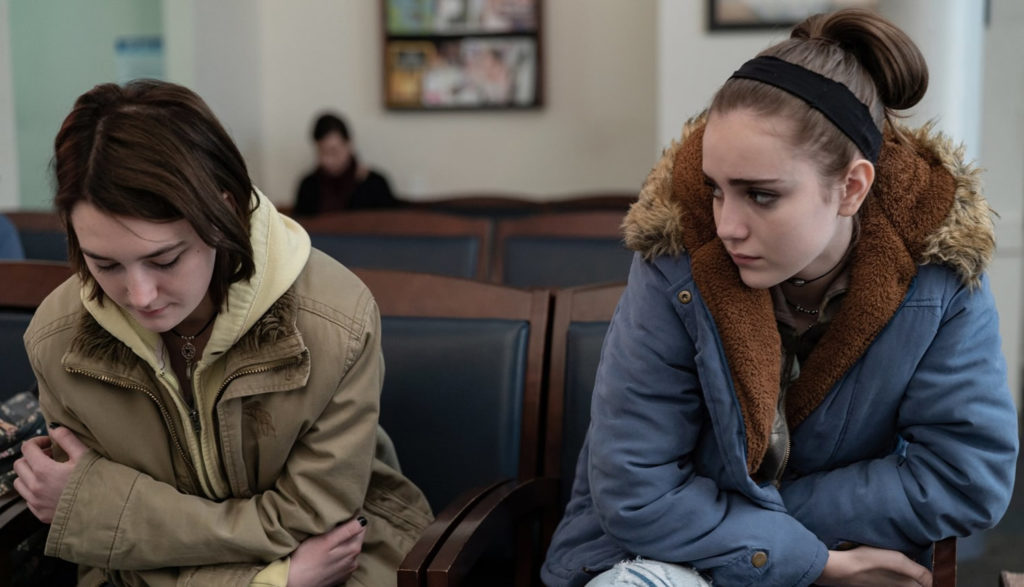 “Slut!” someone shouts at Autumn’s school concert. Right in the middle of her solo performance, too. She knows who’s yelling at her: Autumn’s sleazy ex-boyfriend. The same one who got her pregnant at 17 years old.

After confirming the pregnancy at a local women’s resource center, Autumn decides she’s not ready to be a mom. And she’s not willing to put the child up for adoption either. She just wants this all over as soon as possible—which means getting an abortion.

Autumn learns that because she’s still a minor, she’ll need a parent’s consent in order to have the abortion in her home state of Pennsylvania. But rather than telling her mom what’s going on, she and her cousin, Skylar, the only other person who knows about her condition, head to New York to terminate the pregnancy.

Skylar and Autumn offer support to each other as friends. Both adolescents face sexual harassment throughout the movie, and they have each other’s backs—even if sometimes all they can offer is a sympathetic shrug.

The two friends sometimes butt heads due to Autumn’s refusal to talk about what she’s going through. But Skylar forgives her, striving to empathize with how difficult the choice is for Autumn.

Autumn’s mom is caring and loving towards her family. She doesn’t seem to have a lot of influence over Autumn (or over her crass husband). But when Autumn is feeling most vulnerable, it’s her mom whom she calls. Various other characters—both at a pro-life women’s clinic and at an abortion clinic—treat Autumn kindly.

Although Autumn never voices it out loud, it’s clear that she struggles with her pregnancy and abortion.

Many people pray and sing hymns outside an abortion clinic. One of these people holds a poster with the image of the virgin Mary, while another holds a crucifix.

A guy makes out with Skylar, caresses her leg and later kisses her goodbye. A couple makes out. The camera lingers on a teen girl’s backside when a guy leers at her. The sexual encounter that leads to Autumn’s pregnancy is not actually depicted, but rather implied.

A man on the subway touches himself inappropriately when left alone with Autumn and Skylar. When Autumn and Skylar turn in their money bags at work, their boss grabs their hands through the small window and kisses their hands passionately, to the great discomfort of both girls. Autumn’s stepdad makes sexual comments to the family dog in an attempt to make her mom jealous. A teen guy makes a crude facial expression.

An abortion counselor discusses Autumn’s sexual history with her, going into some details about the age she started having sex, how many partners she has had, the types of sex she has had and the types of protection she has used.

Autumn and Skylar change clothes several times and we sometimes see parts of their bras. Skylar uses tissues to clean herself in a public restroom, reaching down her pants to wipe herself down and calling it a “French whore bath.” We see Autumn’s exposed belly several times as well as her bare legs when she is using the restroom and put into a gynecological examination chair.

We learn that Autumn was both physically and sexually abused, having been forced into a sexual act at least once.

In an attempt to induce an abortion at home, Autumn punches herself in the stomach repeatedly; we later see her bruised belly. When she later goes to a clinic to have the procedure professionally done, she flinches when they insert the dilator into her cervix. Later on that night, she experiences extreme cramps and we see that she has bled heavily onto a sanitary napkin.

Autumn pierces her own nose using a sterilized safety pin, and we see some blood.

We hear the f-word and the s-word once each, and there is one misuse of Jesus’ name as well. A teen girl and a dog are both called “sluts.” Someone makes an obscene hand gesture.

Several people drink beer. And despite being underage, Autumn’s mom allows her to have a beer at home—which Autumn consumes despite being aware of her pregnancy. Skylar also drinks beer with a guy, even though he knows she’s not 21.

Autumn’s stepdad smokes inside the house in front of his kids.

Autumn also attempts to induce an abortion at home by purposely overdosing on vitamin C tablets. She drinks a large amount of cold medicine (more than the prescribed amount) to help her sleep. She also takes some sort of prescribed medication after her abortion. She and Skylar talk about taking a lot of pain medication for menstrual cramps.

Men are portrayed very poorly in this film. It starts with Autumn’s ex-boyfriend humiliating her in public and goes downhill from there, with everyone from her boss to strangers on the bus taking advantage of both her and Skylar.

Autumn’s stepdad is kind of a jerk. After she’s verbally shamed at her school concert, her stepdad refuses to compliment Autumn on her performance, saying that she’s “always in a foul mood.” He later makes a comment about her needing to have her head checked by a doctor.

A guy on the bus to New York takes interest in Skylar and makes several attempts to separate her from Autumn. She deflects his questions, hoping he’ll take the hint; but on their last night in town, the girls are forced to hang out with him, hoping that they can convince him to lend them some money for their bus ride home.

Autumn throws a cup of water into her ex’s face. A much older man makes a pass at Skylar while she is working.

Autumn is scared and unsure of what she wants to do when she goes to a pro-life women’s clinic. A well-meaning worker there shows her an extreme scare-tactic video in an attempt to keep her from choosing abortion, arguably reinforcing a simplistic and inaccurate caricature of pro-life volunteers. Autumn decides to go through with the abortion anyways, but almost seems in denial about what is happening. She refuses offers for financial aid and housing and repeatedly insists that she is fine, even though she’s clearly not.

Autumn experiences morning sickness at work. She rushes to the bathroom, and we hear the sounds of her throwing up. Skylar steals money from the till at work when their boss refuses to let Autumn leave after getting sick. The girls lie to their parents about their whereabouts. They also sneak onto the subway when they can’t afford tickets.

Never Rarely Sometimes Always is a difficult film to watch. And writing this review has been no easier, focusing as it does on the difficult topic of abortion.

My heart breaks for Autumn throughout this film. She’s just a kid after all. She shouldn’t have to make life-altering decisions. What’s more, she’s just so alone in the world. Sure, Autumn’s got the support of Skylar. But even that friendship feels distant and closed off at times. Her mom also seems to be very caring and loving, but Autumn is never quite able to tell her what’s really happening either—probably because of how her stepdad would react.

We learn that Autumn has been physically and sexually abused by her boyfriend (which is likely how the pregnancy occurred to begin with). And it’s clear that this whole situation brings her shame. Autumn’s response is simply to push through it all on her own. And despite her friendship with Skylar, she never truly opens up to anyone.

This independent film, which debuted at Sundance earlier this year, has been praised for its gritty, realistic depiction of a poor, abused young woman who chooses abortion. It invites audiences to sympathize not only with Autumn in her difficult situation, but with her choice to terminate an unwanted pregnancy, too.

But the film’s caricatured depiction of clinic workers who would help Autumn make another choice—life—doesn’t invite similar sympathy. Instead, these momentary voices in Autumn’s life are depicted as simplistic and out of touch with the hard reality of this teen girl’s life. Well-intended, perhaps. But also clueless, the film suggests.

The end result? This is an agonizing tale of a pregnant young woman who never really seems to recognize any other choice but abortion—even if that’s a choice that ultimately seems destined to add still more layers of shame, pain and isolation to Autumn’s quietly tragic existence.

If you (or someone you know) are wrestling with an unwanted pregnancy and/or considering abortion, Focus on the Family is here to help. Please take a moment to consider the following resources related teen pregnancy and alternatives to abortion:

Teenage and Pregnant: Why I Chose Adoption