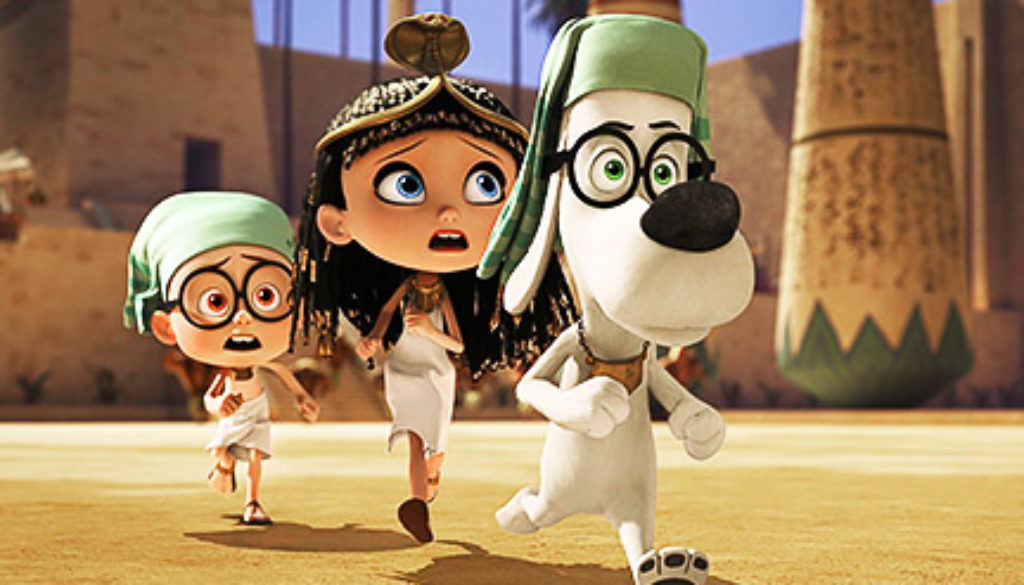 It’s been said that those who forget their history are doomed to repeat it. Particularly if they’re in a class that requires them to memorize a whole bunch of dates and stuff.

But sometimes repeating history can be a good thing—especially if you’ve got a Wayback machine.

Mr. Peabody and his adopted son, Sherman, have just such a device stuffed away in their New York City penthouse. Every now and then, the two will hop into the apple-colored time machine and zip back to the past. Wanna visit Wyatt Earp in Tombstone, Ariz., circa 1881? No prob! Just steer clear of the corral. Curious about who Alexander was before he got all Great? Awesome! Wait by the gates of Persepolis for the mighty Macedonian to stop by. Have a hankerin’ to fly kites with Ben Franklin? Why not? Charge into the Wayback machine—that clever device is the key.

‘Course, being on a first-name basis with historical figures does have its drawbacks. Take that whole business of George Washington and that poor, helpless cherry tree of his. Every smart 7-year-old knows that he chopped down that woeful bit of flora, and smart 7-year-old Penny proudly repeats the story during the first day of school. But Sherman, who happens to know ol’ George personally, says the story is “apocryphal.” Made up, in other words.

Being called out on the cherry tree story doesn’t sit well with little Penny. In fact, she thinks it’s the pits. So during lunch, she hounds Sherman about his adoptive parent, Mr. Peabody. The way she reasons it, if the dude’s dad is a dog, why, Sherman must be a dog too, right?

Sherman takes offense … and bites her.

Ruff response, that. Before you can shake a stick, Ms. Grunion from Social Services storms in, growling about whether a dog (no matter how smart) should have custody of a little boy. So Peabody decides to set matters aright with a dinner party—one in which Penny, her parents and Ms. Grunion will all be able to see firsthand what a capable parent a canine can be when he puts his oversized mind to it.

But when Penny starts quizzing Sherman about George Washington again, Sherman mentions the Wayback machine, and nothing will do for Penny but to try the thing out.

Awkwardly, Penny soon gets left behind in ancient Egypt. Loafing, no doubt.

Mr. Peabody and Sherman can’t just leave it to Penny to turn up again. Her parents would surely flip. No, Mr. Peabody must rescue the girl, protect his son and get everyone back before the Baked Alaska melts.

Yes, it’s tough for a father like Peabody to take such an fearsome responsibility in his own furry little hands. But after all, what are paws for?

Peabody would do anything for Sherman. And so he spends much of the movie rescuing him from one situation or another and, like any good dad, he gets irritated when Sherman takes unnecessary and dangerous risks. He reminds Sherman that everything he does is for Sherman’s own good and safety. Which is true.

But 7-year-old Sherman is ready to have some companions besides his furry father (who’s having a little difficulty loosening his grip on the boy), and Penny encourages him to take chances. Unwise chances, yes, but through a number of misadventures, Mr. Peabody and Sherman come to some shared realizations: Sherman is capable of more than Peabody thought—but is still in need of a good, wise and careful dogfather to protect him. While their love for each other is never in doubt, the two grow closer during the movie, and that’s sweet to see.

After a rough start, Sherman and Penny become friends. Sherman never had any massive animosity for the girl to begin with and, well, Penny warms to him after he saves her life multiple times. Amazing what a little heroism, sacrificial love and a time machine will accomplish in a relationship.

Mr. Peabody teaches Sherman how to swim in the Nile river, just as an Egyptian princess wades through the reeds to find another little boy floating in a basket. When father and son return to Egypt to rescue Penny, they masquerade as Anubis, the Egyptian god of mummification and the afterlife. (They hide in a statue of the jackal-headed deity.) Mr. Peabody tells the Egyptians that if they don’t release Penny, they’ll be visited by horrible plagues. “Again with the plagues!” a bystander says, wondering aloud why he ever moved to Egypt.

We hear more about the Egyptians’ gods, with Anubis (Peabody) telling a crowd that he’d been talking about Penny with the sun god Ra just the other day. And when the Wayback machine finally leaves Egypt, it hovers above another god-statue like a sun disk, mimicking the religious symbols carved in many an Egyptian tomb.

Penny and Sherman, aboard a contraption made by Leonardo da Vinci, zoom through the dome of the Florence Cathedral as a choir sings below. The director looks up at the flying object (which sports some rather angelic-looking wings) and seems to accept it as a religious sign or manifestation. We hear references to yoga and meditation. Ancient Greeks use the name Zeus in a prewar chant (“Zeus on three”).

Penny (who’s 7, you’ll remember) apparently gets engaged to marry King Tut (also a child). Tut is taken with his new princess in a kid-like way, referring to her as his “flower.” (She’s rescued before the marriage ceremony is completed.) A Grecian warrior snatches a modern-day woman and carries her into the past, where the two eventually marry (and kiss).

Sherman zaps himself into a time in which another version of himself is already hanging out—an act that could disrupt the space-time continuum, particularly if the two Shermans come in physical contact with each other. Peabody tries to stop one Sherman from encountering the other. “I’ve got to get you out of here before you touch yourself!” he exclaims. When Peabody warns Sherman to be aware of booby traps, Sherman chuckles, “You said booby!” Peabody’s head punctures a painting of a woman with an expansive bosom and a cleavage-enhancing dress. Someone references a toga party.

Mr. Peabody and Sherman visit some pretty violent periods of history. For instance, they arrive in Paris during the French Revolution and the subsequent Reign of Terror, wherein Peabody must swordfight with Maximilien de Robespierre and several soldiers. He is also nearly beheaded via guillotine. They land in Troy on the cusp of the Trojan War, and Sherman joins the Greek army. He seems willing to do battle until an angry Trojan with an unsheathed sword makes him realize that he could be killed. He, Peabody and Penny escape in the midst of a chaotic, sometimes flaming fight.

Ancient Egypt is also harrowing. They’re chased. Penny nearly has her hand sliced open (part of the marriage ceremony with Tut) and is told that, should the king die, she’ll be killed too. (“Humorous” hieroglyphs depict someone getting his guts ripped out.) Sherman and Peabody are trapped in an Indiana Jones-like tomb rigged with snares (that eventually bring the temple down) and flying boats (one of which smashes into a spike-strewn wall). In Renaissance Italy, Penny and Sherman’s wild ride on that aforementioned flying machine ends with a crash.

Folks are thwacked on the head, hit and pushed. Someone is twice shocked with a Taser. Peabody cartoonishly contorts a guy with some painful-looking chiropractic moves. People, statues and other contraptions fall from the sky. And, indeed, someone seems to die after falling from a high precipice.

“Darn” is as dismal as things get in this category.

When Peabody mixes drinks for his dinner guests, he calls his creation “Einstein on the Beach” (an apparent riff on “Sex on the Beach”).

While careening through the sewers of Paris, Sherman announces that the water tastes “funny.” They shoot from what would be the backside of the Giant Sphinx, and soldiers drop from the rear of the Trojan Horse. We see and hear references to defecation, urine, flatulence, posteriors and body odor (“the smell of victory,” Agamemnon declares).

Mr. Peabody and Sherman certainly know a thing or two about history. And they themselves are history. They were originally created in the late 1950s for the Peabody’s Improbable History shorts shown on Rocky & His Friends (later The Rocky & Bullwinkle Show). They initially lasted until 1964, though they’ve had second, third and fourth lives via syndication broadcasts and now the likes of Hulu. For decades, the two simply drawn characters have entertained us with their flippant look at history, their winking adult asides and their miserably awesome puns.

This big-screen reincarnation has a lot more high-gloss sheen than those originals, with its computer-animated characters and 3-D rendering. And while I miss the 2-D drawings, I have to say that it does stay true, at least tonally, to the original. The Wayback machine is intact. (Sometimes known as WABAC way back then.) As is the New York mod 1960s vibe. And, of course, the puns are still hilariously putrid. (My favorite new one: Sherman grasps for a hand in the dark and, discovering it to be the hand of a mummy, he hastily rips hand and arm from the body. “Well, that’s disarming,” Peabody deadpans.)

But in bringing Peabody and Sherman to a modern audience, it seems that DreamWorks added content that would surely disappoint Peabody himself. The dog, after all, is not a fan of amateurish antics, and hardly one to cotton to bathroom humor. Yes, Peabody’s Improbable History always had a sly sense of fun. But the show’s landmark creativity has turned a tad more crass here.

Thankfully, I’m able to say “a tad” instead of “a lot.” And so the bathroom humor doesn’t swirl around everything, nor does it wash away the film’s positive messages about family and friendship or drain it of its heart. Mr. Peabody & Sherman probably won’t go down in history as an all-time classic. But it doesn’t wholly embarrass its predecessor either. This new Wayback machine, as it travels to the past, will still trigger smiles in the future.