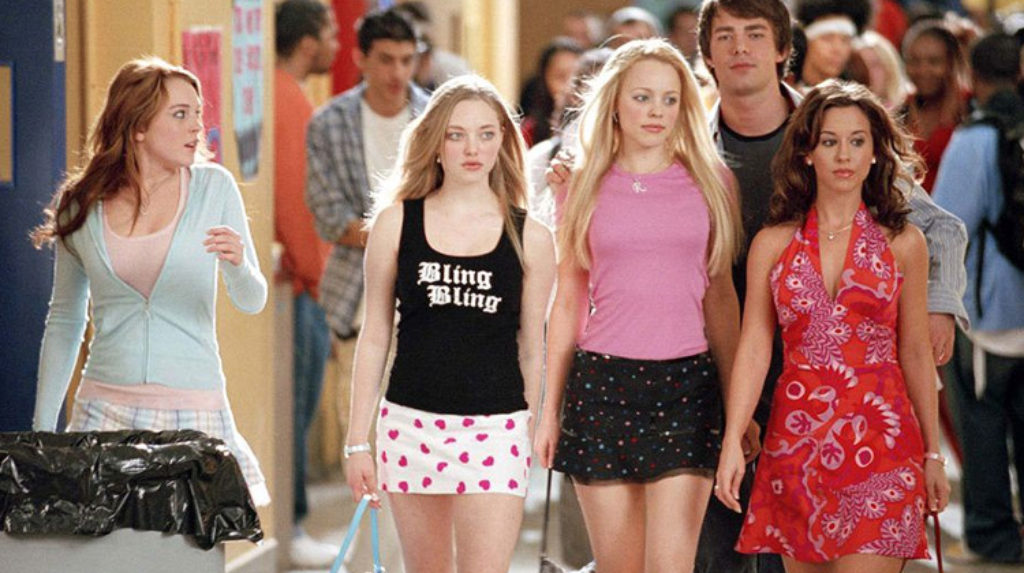 After spending most of her life being home-schooled in Africa by zoologist parents, Cady Heron moves to Illinois and enters the real jungle: public high school. She connects with social outcasts Janice (a Goth toughie) and Damian (a hefty homosexual), and gets a zoo-like tour of the cliques to avoid. Chief among them is a group Janice calls The Plastics. They are gorgeous, wealthy, snooty girls led by a malicious Barbie doll named Regina. Both admired and loathed by the student body, the catty trio quickly takes an interest in Cady, who tries hard to think the best of them.

Regina proves Janice right, however, when Cady’s interest in Aaron—Regina’s ex-boyfriend—inspires covert antagonism of adolescent proportions. Made aware that Regina is feigning friendship while stealthily assaulting her, Cady stays close to The Plastics in order to give Regina a dose of her own medicine (“In girl world, all the fighting had to be sneaky”). The trouble is, the more Cady play-acts like a Plastic, the more she becomes one. She soon learns that one’s character is a work in progress and that casual remarks made in private can have far-reaching consequences.

There’s a social conscience at work here, and the film isn’t afraid to moralize. Teens who tune in for the cruel jokes and snarky sexual stuff may turn their noses up at the final “too preachy and sentimental” quarter hour, but it’s nice to see a showy bow of redemption tied on an otherwise mixed bag. After 90 minutes of poking fun at self-important, superficial cliques, the story closes by urging teens to clear the air amongst themselves and practice mutual respect. As one young man points out, “There’s good and bad in everyone.” Cady learns that it’s true, and when she gets voted queen of the spring dance, uses the platform to honor the other nominees. She even breaks the crown in pieces and shares it with them.

Cady sets out to teach Regina a lesson, but learns a valuable one herself: It’s pointless to put someone else down in an attempt to make yourself look or feel superior. She says, “Calling someone fat doesn’t make you any skinnier. Calling someone stupid doesn’t make you any smarter. All you can do in life is try and solve the problem in front of you.” Most everyone gets the point, or at least appreciates Cady’s nobility. She’s realistic enough to know that every incoming class will have its Plastics, but is idealistic enough to believe that positive peer pressure could keep them from seizing control.

Another strong message involves the destructive power of gossip, be it malicious or merely careless. (The Bible addresses this issue in 2 Cor. 12:20, James 3:8 and Prov. 11:13, 16:28, 26:20.) Cady pays a heavy price for making a casual remark about a teacher that takes on a life of its own and causes pain. Until she owns up to it and apologizes, Cady is miserable. She takes a big risk coming clean, but decides doing the right thing is worth any fallout (“I had to suck all the poison out of my life”). The fresh start is liberating. She concludes that gossip is a dead end (“I’m trying this new thing where I don’t talk about people behind their backs”).

While undercover among The Plastics, Cady begins to lose track of who she is and the role she’s playing. This illustrates an important truth: No matter what we truly believe in our hearts, we are capable of behaving our way into a change of character. It’s easy to develop bad habits and rationalize, “That’s not who I really am.” But in Cady’s case, fighting nastiness with nastiness draws her dangerously close to becoming what she despises.

The principal tells an assembly of girls, “What the young ladies in this class need is an attitude makeover.” Indeed they do. It’s refreshing to see educators bucking the values-neutral trend and sequestering students in order to cure a moral virus. Ms. Norbury addresses the issue head-on, making the students realize that they’ve all been victims and perpetrators of gossip, and need to apologize to each other (an exercise followed by a series of “trust falls”). Ms. Norbury tells girls to stop referring to each other as “b‑‑ches,” “sluts” and “skanks” because boys hear that and feel entitled to be equally disrespectful. She also encourages Cady to be herself and achieve her academic potential (“You don’t have to dumb yourself down to have a boyfriend”).

There’s also a great statement about “lovingly tough” versus “permissive” parenting. Regina’s needy mother sees herself as progressive and open-minded. She boasts, “There are no rules in this house. I’m not like a regular mom. I’m a cool mom.” But the filmmakers don’t view her as cool at all. She’s a foil. Clinging to fading youth herself, she’s scared of alienating her daughter and lacks the confidence to establish firm boundaries. Consequently, Regina is shrewish, selfish and out of control. This example of lousy child-rearing makes Cady’s firm, involved parents look smarter and more caring, so that when they ground Cady, it’s clearly an act of love. This contrast—humorous, yet poignant—reminds teens not to resent their parents for making rules and enforcing them.

Elsewhere, the hunky Aaron decides that an innocent photo of 5-year-old Cady riding an elephant is more attractive than one of her striking an in-your-face pose with The Plastics. It’s a subtle moment, but a powerful one that says decent guys look at the heart. And while Cady may have lived a sheltered life as a home-schooler abroad, she seems better off for it. She’s better educated than—and lacks the cynicism of—most of her peers. There’s a sweet awkwardness about Cady early in the film that attracts Aaron to her.

During the opening credits, Cady talks about not being a stereotypical “weirdly religious” home schooler, as we see a group of backwoods young southern boys portrayed as pro-God, pro-gun and anti-gay.

The Plastics wear form-fitting outfits, often with bare midriffs or cleavage showing. They use Halloween as an excuse to dress up in scant, sexually provocative costumes. At a talent show, they wear skimpy Santa suits and perform a slinky dance to “Jingle Bell Rock.” On numerous occasions, students are seen kissing passionately, often in school. Frank conversations involve sex, breasts, tampons, homosexuality and lesbianism. One girl is accused of “making out with a hot dog.” A wannabe MC launches into a salacious rap until the principal cuts him off.

Regina’s mother walks in on her daughter and a boy kissing passionately on her bed—and offers them a condom. To get a rival in trouble, Regina calls the girl’s home and pretends to have test results from Planned Parenthood. At a party, couples pair off and make out in various rooms throughout Cady’s house. The projection room in the auditorium is a common rendezvous spot for Regina and a sex partner (they’re shown in their underwear).

In health class, the coach teaches abstinence and immediately hands out condoms, implying that it’s fruitless to tell teenagers not to have sex. He also preaches the evils of casual sex and STDs, yet doesn’t follow his own advice. High schoolers catch him having sex with a student.

Chaos erupts in the school’s halls when students’ embarrassing secrets are made public. A girl gets hit by a school bus. Cady entertains fantasies in which teens act like ravenous jungle animals, viciously attacking each other. One involves her grabbing Regina by the throat. Another imagines snobbish girls getting pasted by a bus. Boys hit Damian with a shoe while he’s singing. A guy gets clobbered by a flying boom box. Girls refuse to catch an unrepentant snob during a trust fall, causing her to land hard.

More than 40 profanities or instances of crass slang. Nearly half are exclamations of “oh my god.” Girls call each other “b‑‑ches,” “sluts” and “skanks.” Regina begins, but fails to complete the obscenity “motherf‑‑‑er.”

High school students drink spiked punch at Cady’s party. How the alcohol finds its way into it is unclear, but Cady gets tipsy before vomiting on Aaron. Cady misrepresents a statement by Ms. Norbury that ignites a rumor that the math teacher is a drug pusher.

Beautiful girls onscreen are extremely self-conscious about their appearance, which could cause “average” teens in the audience to feel even more inadequate. Nasty pranks and deceptions abound. An emotionally needy teen is run out of the large-group therapy session by Ms. Norbury because she doesn’t attend the school. It’s meant to be funny, but by doing so, she directly contradicts the kindness and compassion she’s teaching the girls (a poorly placed joke by the screenwriters). A flatulent student takes aim at Cady.

In a lot of ways, Mean Girls reminded me of Alicia Silverstone’s Clueless and Drew Barrymore’s Never Been Kissed. It has the same smart, upbeat tone, snappy dialogue and humorously thorny commentary on high school subcultures. Unfortunately, another similarity is that it’s sullied by unnecessary language, immodesty, sexual themes and teen drinking. That’s disappointing but not entirely surprising. After all, the film was produced by Lorne Michaels (The Ladies Man, Wayne’s World, A Night at the Roxbury) and co-stars four members of his Saturday Night Live cast, including Tina Fey who wrote the screenplay. I guess I was more surprised to find that it had strong moral causes to champion and wasn’t afraid to preach them with confidence.

As for Lindsay Lohan, young actresses fortunate enough to survive child-stardom grow up to assume more “mature” roles. It’s inevitable. Mean Girls marks 17-year-old Lohan’s first star turn in a PG-13 movie. Because of the edgier themes running through this film, families who fell in love with her in The Parent Trap—and stuck around for Freaky Friday and Confessions of a Teenage Drama Queen—may have followed her about as far as they’re willing to go. It’s a shame more young people won’t be able to benefit from the rich material here. Mean Girls has forced me to wonder if teen culture has declined to the point that it’s now impossible to create a bitingly relevant commentary on it without resorting to objectionable themes.