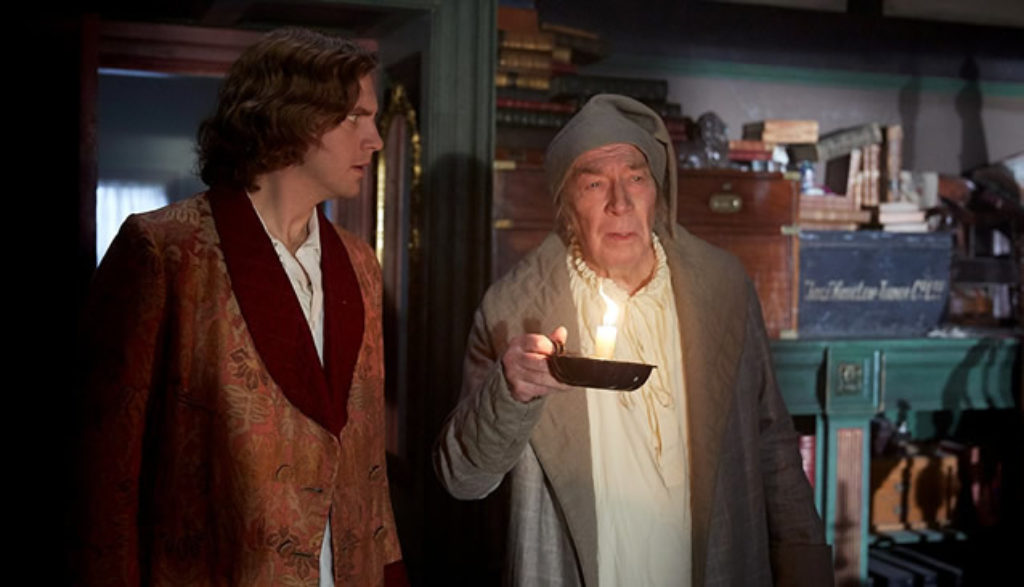 When I was a kid, Christmas items didn’t hit the shelves until after Thanksgiving. Nowadays Christmas paraphernalia is on display any time after Labor Day in the big box stores and year-round in specialty Christmas shops. Yes, December 25 is a big, big holiday with zillions spent on presents, lights, trees, travel, wrapping paper and the like.

But it hasn’t always been that way. Especially in England in the early 1840s. Although scholars disagree about how culturally significant Christmas was during this period, all agree that Charles Dickens’ A Christmas Carol moved the needle in 1843. After that, celebrating Christmas became much more fashionable among all social classes, inspiring such things as generosity, seasonal meals and family gatherings to celebrate the holiday.

But just how did this beloved story come about? That’s the tale The Man Who Invented Christmas tells, albeit with a lot of dramatic license tossed into the narrative mix—especially when it comes to imagining what this famous English novelist might have been thinking as he attempted to get his latest story written and published in just two months’ time.

As our story opens, Charles Dickens is—er, was—a wealthy man. The successes of Nicholas Nickleby and Oliver Twist have allowed him to live in an opulent home with household staff and a nanny for his children. When he travels to America, people line the streets to see him. “Never [has] an emperor in all the earth [been] so cheered,” it’s said.

Despite that popularity, though, Dickens’ last three works have nosedived. And flops don’t pay the bills. Steeped in debt, Dickens knows that if he can write another blockbuster, he’ll have the cash he needs. And, boy does he need it to settle a loan or two, to continue upgrading his home as his wife is inclined to do and to pay all the back wages he owes his staff.

But writing a blockbuster fast is easier said than done. Because as all writers know (including this one), sometimes we face writer’s block. And Dickens has a gargantuan case of it in October 1843. When he sits down to write, he, well, just sits. Nothing comes his way. No ideas. No characters. No plot.

Slowly, however, he begins to formulate the rough edges of a story by observing the people around him. And elderly, shuffling waiter at a men’s club he frequents is named Marley. Hmmm! Mental note to self. When he hears the family’s nanny screaming and walks in on her telling an old Irish ghost story to his children, he makes another such note. But it’s not until he encounters two curmudgeonly men, one at a funeral and the other at a more festive event, that his tale really begins to take shape.

The two men meld into a single individual he decides to call … Scrooge.

But something else begins to happen, too. As Dickens’ imagination roars to life, his characters seemingly come to life around him, and moviegoers view the interaction that is playing out in Dickens’ head. Tiny Tim hobbles around with his crutch. Marley returns from the dead. And Scrooge, of course, is a cold-hearted, miserly old man who encounters the three ghosts of Christmas past, present and future—with the latter revealing a grim fate for him if Scrooge doesn’t amend his greedy ways.

Dickens clearly loves his wife and his children. (Although he doesn’t always demonstrate that love perfectly, as we’ll see.) When he learns that his wife is pregnant with yet another child (in real life, they had 11), he’s quite delighted—despite the fact that the baby is coming at an inopportune time financially.

Dickens’ good-hearted nature is evident elsewhere, too: We hear that he has purchased his parents a house and pays them an allowance. But they live beyond those means and accrue more debts. He turns his back on them in frustration at first. But he has a change of heart and eventually reconnects with his folks, both emotionally and (it’s implied) financially. And despite the family’s financial woes, Dickens’ wife, Kate, still describes her husband as a person who gives money to everyone.

Dickens repeats a phrase he learned from his father: “No one is useless in this world who lightens the load of others.” That theme stands out in A Christmas Carol, as do several others. The story also emphasizes the importance of generosity and reminds us that money alone cannot satisfy, no matter how much of it we might have. The possibility of real change—even for someone set in his ways—is another important theme here. Finally, the movie majors on the importance of family and focuses on holding onto hope and love, even in desperate times.

Interestingly, the closing credits demonstrate that pop culture was influencing people’s values all the way back in 19th-century England: We learn that after the release of A Christmas Carol, “Charitable giving soared,” a testimony to the inspiring power of a well-told tale.

The humble, world-changing beginning of what we now celebrate each December happened more than 2,000 years ago in a stable where a virgin girl miraculously gave birth to the world’s Savior, Jesus Christ. That part of Christmas—the real essence of Christmas—isn’t the narrative focus here. Obviously, Dickens didn’t invent that, despite the film’s title. Still, his story did significantly influence—or “invent” in the film’s usage of that word—the way we still celebrate Christmas today.

A Chrismas Carol is, at its heart, a ghost story, something that might seem a bit odd to us now but wasn’t at the time. In early 19th-century England, the film suggests, Christmas was more similar to our Halloween, and it often included the telling of ghost stories. Dickens overhears his nanny relating one such tale to his children, which serves as yet another source of inspiration for his own famous story. (Later, we see the ghost of Marley and the spirits of Christmas past, present and future.) The family’s nanny also reads a book entitled Varney the Vampire, a book she loans to Charles.

Elsewhere, a flashback pictures young Dickens viewing an early iteration of a slideshow that also includes an image of a ghost. Dickens’ father releases a crow from its cage, and someone says it’s bad luck. Strangely, it’s said that the mere sight of cows causes pain to Dickens’ mother—something the film never explains.

A painting of Jesus, Mary and Joseph in the family’s home depicts the (unclothed) Christ child.

Dickens passionately kisses his wife. They’re shown in bed twice (though not intimately).

Dickens throws a punch and misses his imaginary Scrooge. In a flashback, he also recalls being hit and bullied as a child. The same tormentors leave him a dead rat to deride the boy further. Struggling with writer’s block as an adult, Dickens angrily hurls an inkwell into his fireplace.

The British vulgarity “bloody” is used at least four times. Someone reminds Dickens that he once wrote (in Oliver Twist) that “the law is an ass” (a metaphorical comparison to the animal, though there’s likely a profane double entendre lurking here, too.) Dickens describes someone as “money-grabbing” and “scum-sucking.”

Dickens’ father helps himself to a couple of his son’s expensive cigars (though of them neither is seen smoking). At one point, dad’s a bit tipsy, too. Several scenes show a person smoking a pipe. At a gentleman’s club, we see what appear to be alcoholic drinks on tables, and one patron puffs on a cigar.

Dickens unfairly dismisses his nanny (though he apologizes to her in a later scene). He lies to his wife at one point. And Kate, for her part, tells Dickens that being married to him requires “walking on eggshells.” She bemoans the fact that there are “two of [him],” saying that his literary characters matter more to him than his own family. (This less-than-stellar view of her husband, however, doesn’t cause the significant marital difficulties. Kate just wants him to understand her feelings.)

An elderly and eccentric lawyer offers biscuits to two guests, biscuits that are (unbeknownst to the recipient) crawling with worms.

Since its arrival in late 1843, A Christmas Carol has become a holiday favorite the world over in its myriad retellings. (You can check out our reviews, for instance, of the 2010 version starring Jim Carrey here and 1993’s The Muppet Christmas Carol here). This new adaptation is a bit different, however, offering something akin to an “origin story” for the famous tale we already know so well.

Charles Dickens is a likeable, down-to-earth sort of guy here. You get the feeling he’d be a nice chap to get to know over a cup of tea. Sure he’s not perfect, but who is? He comes across as generous, caring, talented and, well, human. Dickens is easy to root for, and you find yourself hoping he can get out of debt quickly in order to keep his family life happy and harmonious.

However, there remains the sticky issue of this being a ghost story. This problematic element is a familiar one, hardly a surprise nearly 175 years after Dickens’ haunted yarn was first penned. Still, the inclusion of these spiritual elements may be enough for some families to steer clear of it—classic status notwithstanding.

On the other hand, many families may view these narrative elements as offering an important teachable moment, perhaps providing parents a bridge to more serious discussions about what happens to a person’s spirit after death, as well as sorting out fact from fiction regarding ghostly activities.

But the biggest takeaway here is a big one indeed: Even the worst among us can change. That alone constitutes a Christmas miracle worth celebrating … in a movie that’s got a lot worth celebrating, too.