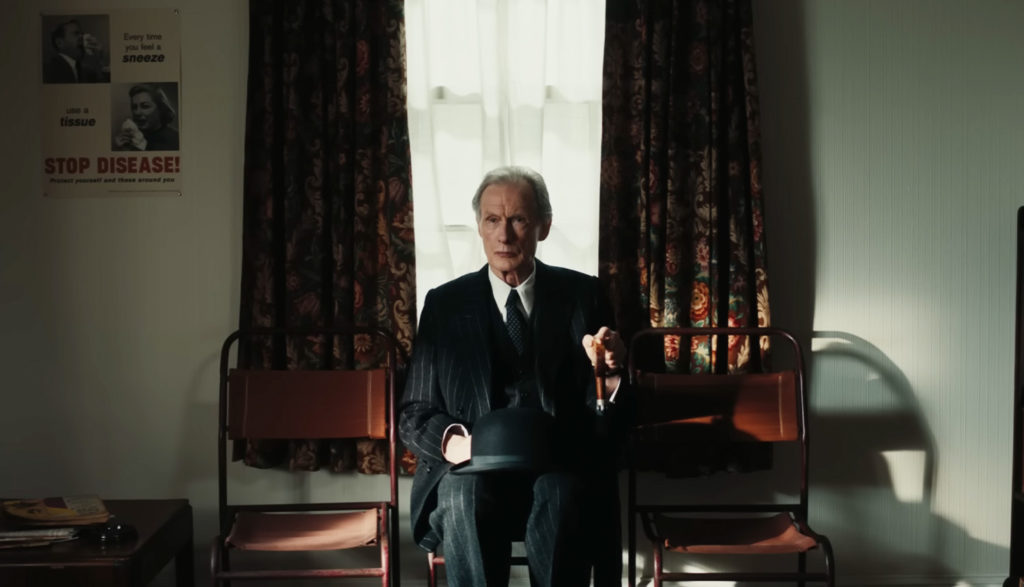 To live a life, and live it well … how does one do such a thing?

Mr. Williams—always Mr. Williams—has lived his life (the last few decades of it, at any rate) with absolute respectability. It’s what is expected of him. Indeed, it’s what he expects of himself.

And as expected, Mr. Williams rarely says yes. He rarely says no, either. He is, after all, an integral part of a bureaucracy. Papers are shuffled upstairs or down, sent across the hall or across the road. And often, they simply sit in the stacks of papers at Public Works for a few weeks, until the matter either disappears or a new request is filed.

That gentle statement about grinding government delay, too, is expected of him. He has done little else for lo these many years.

But then something unexpected happens to Mr. Williams. An incurable cancer has been submitted, and death is seeking admittance. He can file it away six months, perhaps nine at the most. But then, death will come through his door and take him away, not even bothering with the requisite triplicate forms. Nothing can stop his shadowed scythe. Not even British bureaucracy.

When Mr. Williams doesn’t go to work the day after he finds out, it’s as if Big Ben itself skipped a toll. He instead goes to a seaside town and confesses his predicament to a free-spirited playwright he meets in a café. Mr. Williams tells the man (Mr. Sutherland) that he came to town hoping to shed his rigid, aged Britishness and, for once, live a little.

But now that he’s there, with a willing spirit and spending money to spare, Mr. Williams realizes something rather sad.

To live a life well? To do that, given the unforgivable timetable Mr. Williams has been given, is all-but-impossible. But to live well? Perhaps there’s still time for that.

Mr. Sutherland, the playwright whom Mr. Williams meets, is certainly eager to show Mr. Williams the pleasures that perhaps he so long ignored. But Mr. Williams isn’t really interested in wiling away the days he has left on tawdry pastimes. He’s after something more elusive, something with more meaning.

He sees a glint of that in Miss Harris, a young lady who worked for him briefly at Public Works. She’s young and spirited, and Mr. Williams begins to spend what time he can with her—hoping, he confesses later, that she might somehow teach him to live more fully. But that, too, while helpful, is a dead end.

No, he ultimately finds meaning by going back to work, of all things. But instead of shuffling papers to other departments or letting them sit in his baskets, he takes on particular request on. He uses whatever means he has at his disposal to shepherd the project through County Hall’s byzantine system and work-averse managers, showing a stunning understanding of what method of persuasion might work for each. He even begs essentially the manager of the entire bureaucracy—a titled noble to whom Mr. Williams has long literally bowed in deference—to consider his petition.

In so doing, Mr. Williams does something practically unprecedented: He gets something done. And by the time he’s done, he’s inspired others to do the same.

Mr. Williams seems to be a nominally religious man. He talks about returning to “his Maker” and compares the process of dying to that of children being called home by their mothers after a day of play. His funeral is conducted in a traditional church adorned by stained glass windows.

Someone quips that laughter is frowned upon early in the morning,  “rather like church.” Miss Harris has made up nicknames of most of the people she works with in County Hall, and her nickname for Mr. Williams is “Mr. Zombie,” explaining that zombies are like Egyptian mummies that are dead but continue to walk around.

Mr. Sutherland, the playwright, comes across as sort of a intellectual hedonist. He talks to the café’s proprietor, Mrs. Blake, about his latest play, “Shocking Stockings.” He tells Mrs. Blake that she’d likely think it “smutty and trivial,” but he assures her that the play’s reception, and her own reaction, would be much different in Paris.

When Sutherland learns of Mr. Williams’ plight, he takes him out to many of the grimy hotspots he frequents. The last turns out to be a 1950s strip joint, of sorts: The crowd is entertained by a buxom woman in rather revealing garb (think something like a beefy bikini) dancing on stage. At one point, we see that the woman has removed her top, but we see her only from the back. Other women there reveal a bit of cleavage.

Mr. Williams’ and Miss Harris’s relationship is absolutely innocent. But they do meet on a couple of occasions, and they’re spotted by a local busybody who assumes they are having an affair and stirs up rumors to that effect.

Miss Harris is also sensitive about how these outings might look. “Someone might suppose that you’re becoming infatuated.” Mr. Williams admits there’s truth to that, but “not quite as some might suppose.”

We see a man and a woman embrace in an alleyway.

When Mr. Sutherland (the playwright) complains of not being able to sleep, Mr. Williams pulls out several vials of what must be sleeping agent that he’s carrying with him. Both understand that Mr. Williams had considered killing himself by taking them.

Mr. Williams suffers acute pain in his side at times, obviously from the cancer. At one juncture, he takes a handkerchief away from his mouth, and it seems to be stained with blood. We learn that Mr. Williams’ wife died some time before.

We hear one use of the British profanity “bugger.”

Several people smoke cigarettes throughout the film—in keeping with its 1950s setting, but also enough to earn a PG-13 rating.

Both Mr. Sutherland and Mr. Williams drink heavily when Sutherland takes his new friend out on the town. At one point, when Mr. Williams staggers over to sing a Scottish folk tune, he tells the crowd that he has a little Scotch in his family. “It looks like you’ve got a bit of Scotch in you now, mate!” someone shouts. Later, Mr. Williams seems as though he’s almost passed out on some woman’s shoulder.

In a flashback, we see someone, perhaps Mr. Williams’ father, drink a beer. Mr. Williams asks Miss Harris to go out for a drink with him—an invitation that she grudgingly accepts. (He seems to have an alcoholic beverage, but Miss Harris appears to be just drinking water.)

A vacant, rubble-strewn lot (the wreckage probably still lingering from World War II) is muddy with what someone calls sewage water.

Mr. Williams and his son seem to regard each other well, but they’re not what you’d call “close.” Indeed, the senior Mr. Williams never tells his son that he’s dying. (Indeed, he only tells two people: Miss Harris and Mr. Sutherland.)

When his father does, indeed, die, the younger Mr. Williams is filled with remorse—feeling terrible that he died in “all that cold.” Mr. Williams was indeed out in the cold weather toward the end, but it’s likely that his son was talking not about the weather outside, but the atmosphere in the flat that they all shared.

It’s a deceptively simple, even nondescript name, to be sure—easily forgotten and, perhaps, easily overlooked.

But as the movie tells us, so is living itself. We all, by the nature of reading this review, are alive. But how many of us know how to live?

A lot of us—even many of us Christians—don’t quite know what to do with our days on earth until they’re almost gone. And then we remember all the places we wanted to see and the things we hoped to do. We regret the time we spent killing it and wish we had more time to do the things we really valued. We think about how to repair relationships or somehow, in some way, get a little closer to the person that God wanted us to be this whole time.

But what sort of person does God want us to be?

For Mr. Williams, the answer is one we’d do well to at least think about (even if Mr. Williams would likely not bring God into the conversation at all): It’s a person who does his best. Who makes a difference. A person who doesn’t just check boxes and shuffle papers, but works to make life a little better for those around him.

I love the fact that Mr. Williams didn’t punt his life for a few months of fun or frivolity. He didn’t spend it trying to recapture the joy of youth. He didn’t, ultimately, leave who he was and who he’d been all these years. He just became a better version of that person—making a difference as just a regular ol’ bureaucrat.

Living has a nice pedigree. It’s an adaptation of the Japanese film Ikiru by the legendary filmmaker Akira Kurosawa, which was in turn inspired by Leo Tolstoy’s classic novella The Death of Ivan Ilyich.

And it, also like its predecessors, plays it pretty straight and pretty clean. The content is surprisingly mild for a PG-13 film: We see the interior of a rather naughty tent, and we hear one British-centric profanity. Smoking is fairly pervasive. But that’s it. It’s almost clean enough to be cleared for broadcast on the 1953 version of the BBC.

Of course, this film isn’t for kids. But for adults who like to chew on bigger themes without gagging on content problems, and for those who like to see some very fine performances (lead Bill Nighy is rightly getting some Oscar attention), Living fills out the form for “good movie” and files it in triplicate.