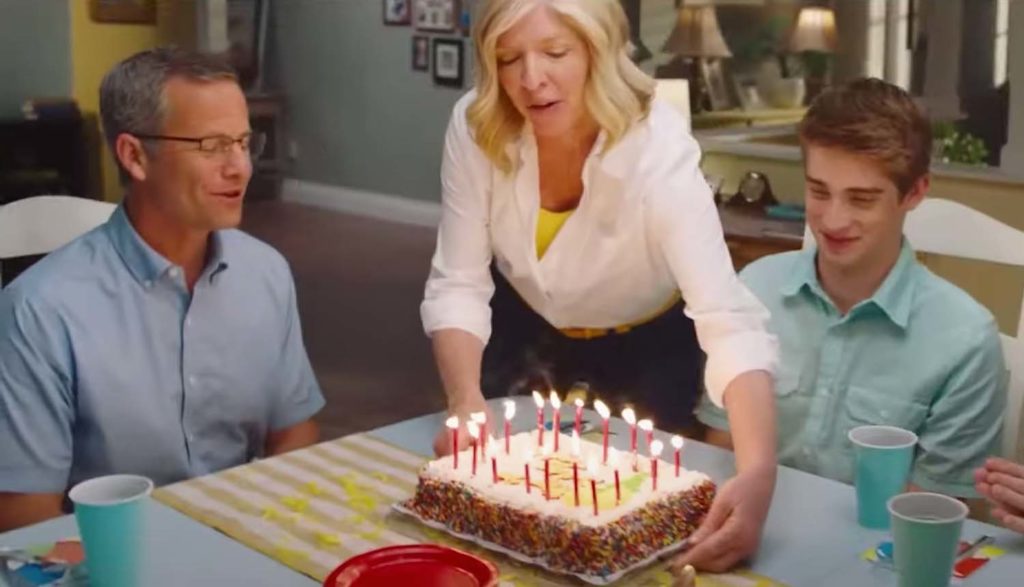 High school senior David Colton is a lot like most kids his age. He loves to wrestle. He’s looking forward to college. And he spends a lot of time goofing off with his best friend, Nate, a budding videographer who films literally everything.

Then again, David’s different. He knows it. Nate knows it. But not many other people are in on his secret. David, you see, is adopted. It’s not something he’s ashamed off. After all, his adoptive parents Jimmy and Susan are about the best a teen could hope for as they love, support and encourage him. Then again, it’s not something he really wants most people to know either.

At David’s 18th birthday, his mother reminds him that he’s now legally old enough to try to contact his birth mother, a woman named Melissa, if he’d like to do so.

At the very same moment, Melissa is wondering if he might just do that. She’s thought about him every day for 18 years, and she fears that he has no interest in reconnecting. “I don’t think he’d want to talk to me,” she tells her husband, Shawn. “He probably hates me for what I did.”

But Melissa takes a leap of faith anyway to update her contact information at the adoption agency, just in case. And with just a bit of nudging from his adoptive mother, David does indeed get in touch with Melissa.

Ever so slowly, through texts and social media posts, Melissa and the young man she gave up for adoption nearly two decades before begin to get to know each other. One day, David makes his decision: He’s going to meet his birth mother, face to face. And maybe his birth father, a man named Brian who split from Melissa years before and who has been more hesitant to reconnect.

And at every step of the way, Nate will be there to chronicle David and Melissa’s tender story, one that’s based on real-life events.

Lifemark shines a redemptive light on the process of adoption while striving to show how emotionally difficult various aspects of that decision can be. We watch as tears stream down young Melissa’s face when a nurse takes her baby out of the room. We see David struggle to piece together parts of his identity that have been affected by the fact that his mother chose adoption at birth. With both of these characters, we see their ambivalence: They long to meet this other person who is so important to them, and yet they’re understandably hesitant with regard to how that reunion might go.

Lifemark is based on a true story of a young man meeting his birth mother, one that was chronicled on film in the documentary I Lived on Parker Street. Though there are moments of tension and uncertainty, Lifemark arguably gives us a story of reunion that arguably goes just about as well as it could have. David’s parents are secure in their relationship with him and certain of his love for them. David bears Melissa no ill will for her decision, but rather simply wants to thank her for the choice she made.

Speaking of choices, we also learn late in the film that Melissa was very close to choosing to terminate her teen pregnancy. A flashback shows her on the table at an abortion clinic before she says she heard a voice telling her that there was still time to make another choice. Though she doesn’t attribute that voice directly to God, it seems pretty clear that’s who she was alluding to.

After learning how close he came to never being born, a tearful David repeatedly thanks Melissa for her choice to give him life—something he commemorates with a dog-tag like necklace with his date of birth, a “Lifemark” on a chain for Melissa to wear as a necklace.

To its credit, the film also subtly hints that not all such attempts at reconciliation or reconnection go so smoothly. David’s dad, Brian, eventually says he was hesitant to meet David because his own mother was adopted and hated her birth mother for giving her up. At another point, David talks to a pregnant teen girl about his experience meeting his birth mother. She replies, “I’m not sure it’s always like that.”

I appreciated those realistic acknowledgements that sometimes things don’t go so smoothly in these situations. At the same time, what we see here is a portrait of redemption in which a young girl’s crisis pregnancy, and her decision to give up her child for adoption instead of aborting him, ultimately result in tremendous blessing for everyone his life touches.

David has grown up in a Christian home. References to having faith and trusting God turn up repeatedly—often coming from David’s dad, Jimmy. When David learns that he must have brain surgery, for example, Jimmy encourages his son to remember God’s faithfulness, saying, “God knew this was going to happen.” Afterward, Jimmy adds, “God got you through this. That’s not a little thing. I don’t think we should take that for granted.” He also tells his son, “David, God gave you to me and mom as a gift. And you will always be our son.”

In a speech competition at school before the entire student body, David reciprocates similar sentiments as he talks about being adopted. “We don’t all share the same path. But I’m thankful for the family that God’s given me.”

We see David and his parents praying and reading the Bible together.

There’s no visual sexual content at all here. However, the story obviously turns on Melissa getting pregnant by Brian when she was 18 and he was 17, while they were both still in high school. We see that they have moved in with each other as teens before David is born.

Late in the film, Nate discovers that his own teen sister, Reese, is pregnant and considering abortion. She asks David to talk to her about her situation, and he affirms how happy he is that his own mother chose to give him birth instead of choosing abortion.

There’s not any real violence at all in the film. That said, a flashback scene near the movie’s end shows Melissa on a table in an abortion clinic about to have that procedure before she makes the decision not to go through with it. She—and the camera—glance ominously at the instruments on a nearby table.

Melissa’s trip to the abortion clinic also includes a pro-life protestor whose words she remembers vividly: “Your baby has 10 fingers and 10 toes—please don’t kill it.”

A few scenes involve activities that could be construed as having some physical risk, such as racing four-wheelers down a forest trail, skydiving and teens jumping from a high cliff (perhaps 50 feet or so) into a lake below.

After a high school wrestling tournament, David faints. Shortly thereafter, doctors reveal that David has a congenital condition putting pressure on his brain that will require surgery.

We hear that Jimmy and Susan lost two children from, it seems, a similar genetic condition. We see them visiting the boys’ side-by-side gravesites and putting flowers down for them.

Nate recounts filming a fight that his sister, Reese, had with her boyfriend, in which she threw bricks at his car.

We hear that Nate purchased his drone on credit, and that he still owes $500 on it.

Christian filmmakers Alex and Stephen Kendrick have a history of tackling the toughest issues that families can wrestle with. And with Lifemark, they’ve added another such pair of topics to their cinematic resume: adoption and the pro-life movement.

This inspiring true story gives us a poignant glimpse of what it might feel like to make the courageous decision for adoption—on both sides of that decision—as well as showing us that child later pondering whether he wants to reconnect with the mother who made that choice. The result is a movie that will, as the Kendricks’ films often do, pull a tear or two out of viewers’ eyes even as it deepens our perspective on this complex subject.

Lifemark also shows us that the decision to choose life and to choose a better life for a baby is both a difficult one and a redemptive one. More than once while watching the film, Melissa’s story, especially, prompted an ache in my heart. How hard it must have been for her, yet how beautiful and life-giving the outcome.

As far as content goes, there’s little here visually that warrants a warning—though I can imagine not all parents would want their teen sons jumping off a small cliff into a lake. Still, the subject of abortion is necessarily a difficult one to address, even if graphic imagery is completely avoided. That issue has earned the film its PG-13 rating, and it’s something that parents of younger children will want to consider before seeing it.

That caveat aside, however, Lifemark feels like the kind of story God could use in deep ways in the lives of those who see it. It affirms the beauty of adoption even as it gently encourages those in crisis pregnancies to make the choice for life instead of ending those pregnancies.

Lifemark is being distributed by Fathom Events and currently is scheduled to run seven nights in participating theaters. Ticket information can be found here.