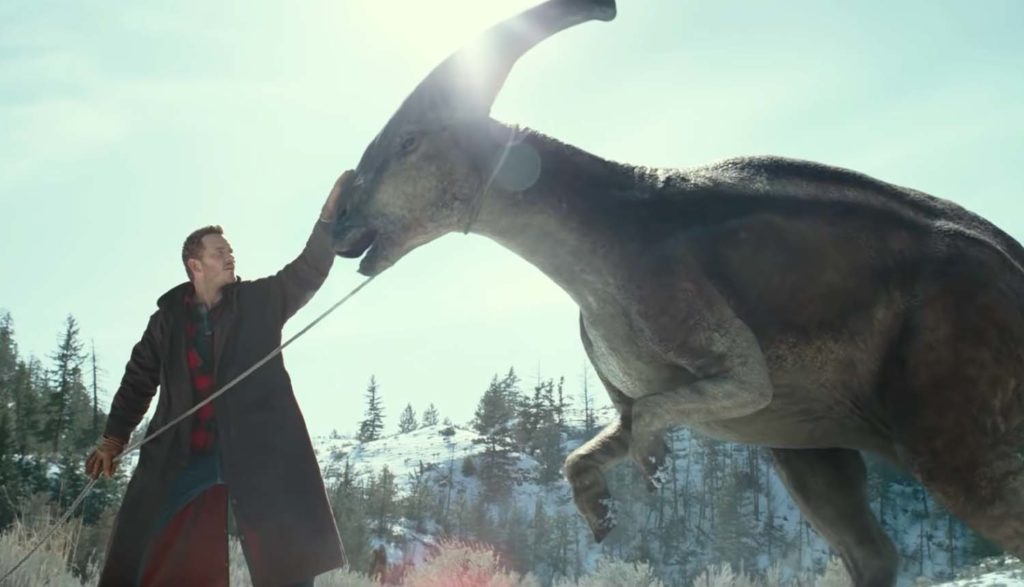 It’s been four years since dinosaurs escaped the volcanic eruption on Isla Nublar. Since then, they’ve spread throughout the globe. That’s not quite enough time for the world to grow used to the new wildlife disrupting society, but things are moving along as well as could be expected. A roaming T-rex harasses campers. Megalodons capsize boats. And pterodactyls make their massive nests atop city skyscrapers.

To prevent black market dinosaur trading and further genetic mishaps, the world’s governments decide that the genetic company Biosyn will have the exclusive rights to capture dinosaurs and place them in a preserve next to the company’s headquarters.

The company is run by one Lewis Dodgson. If that name rings a bell, it’s because he briefly appeared in the original Jurassic Park. Dodgson was the guy who commissioned Dennis Nedry to steal the dinosaur embryos for Biosyn to use. And having finally obtained what he wanted, it isn’t long before things start to go south—for the whole world.

Because as it turns out, Ellie Sattler has been investigating a massive swarm of giant locusts which have been devastating the world’s food supply—except for the crops grown from Biosyn’s seeds. And after a phone call from Biosyn’s very own Ian Macolm convincing Ellie to come look into the company’s sketchy dealings, Ellie recruits her old friend Alan Grant to join her. Soon the two make their way to the Biosyn compound.

Meanwhile, after four years of living in hiding, Maisie, the cloned daughter of Charlotte Lockwood, is kidnapped away from Owen and Claire’s protection. The two desperately give chase, and it isn’t long before our protagonists—from both trilogies—find themselves, once again, running for their lives.

As a clone, Maisie struggles with feeling as if she was simply an experiment and not her own person. Owen and Claire aren’t her biological parents. But they continuously affirm to Maisie that she is her own person, not a replica of someone else. They also protect and care for her as their daughter, going all the way across the globe to rescue her when she is kidnapped.

And it’s not just our main protagonists who are good people. Despite Biosyn’s nefarious intentions, many of the people who work for the company aren’t quite on board. A couple of employees work to actively expose the company’s corruption, and others want to fix the problems that Biosyn has created.

Many characters actively risk their lives to help others.

A man refers to the 10 plagues of Egypt from the book of Exodus. In a speech, Ian says that humanity “not only lacks dominion over nature,” but is actually subordinate to it, putting him directly at odds with God’s mandate in Genesis 1:26. A character makes a reference to the myth of Prometheus.

Owen and Claire kiss, and Alan and Ellie kiss. A passing comment may refer to same-sex attraction. Ian comments that a dog once tried to have sex with his leg.

Anyone paying for a ticket to a Jurassic Park/World movie expects dinosaurs to wreak havoc. And indeed, their presence across the globe leads to many gruesome deaths, both on- and offscreen.

A T-rex eats a man off of a motor vehicle. A dilophosaurus spits its venom on someone’s face before eating that person. Modified dinosaurs kill many others. Other dinosaurs harass people. One man is brutally killed by two dinosaurs pulling at each of his arms and a third one coming to bite his head—the latter of which happens offscreen.

The dinosaurs battle one another as well as hunting modern-day animals. A velociraptor attacks a wolf as the wolf hunts a rabbit, and it nibbles on a dead fox corpse. A pterodactyl eats a dove released at a wedding ceremony. A therizinosaurus uses its massive claws to brutally kill a deer. Dinosaurs cause other mishaps around the world as well, such as capsizing a fishing vessel, ramming cars off cliffs and being general nuisances.

Characters kill giant locusts in a variety of ways as the enlarged insects bite at them. A dinosaur gets hit by a car. Another dinosaur causes an airplane to crash. Maisie is kidnapped.

People shoot and swing knives at our protagonists, though no one is hit by them. Claire Tases a woman. A man catches fire.

There are at least seven uses of the s-word. “D–n” is used five times. We hear one use of “h—” and two instances of “a–.” “B–tard” is used once. God’s name is misused more than 15 times, and one of those is paired with “g-dd–n.” One character exposes both of her middle fingers at another. A character is called a “loser.”

There is one dinosaur jump scare. People mention evolution once. Claire and friends break into an illegal dinosaur facility.

We’ve got Dodgson here. But this time, everyone cares.

That’s because nearly 30 years after his failed attempt commissioning Dennis Nedry to steal John Hammond’s dinosaur embryos in the first film, Lewis Dodgson finally has what he wants: total control.

After the explosive end of Jurassic World: Fallen Kingdom left dinosaurs escaping Isla Nublar and traveling to the mainland, world governments agreed to let Lewis’ company, Biosyn, have exclusive rights to capture the disruptive creatures and move them into a company nature preserve in Italy. Though Lewis explains that they will use the dinosaur DNA to create cures for diseases, it isn’t long before our protagonists realize that the company’s alleged mission isn’t quite what it seems.

And believe me, when it comes to protagonists, director Colin Trevorrow has spared no expense. Jurassic World: Dominion not only includes its usual protagonists, Owen and Claire. It also ropes in the original Jurassic Park heroes: Alan, Ellie and Ian. And while the mashup of the stars certainly leads to many laughs and callbacks to the older franchise, it also makes the film feel a bit disjointed and muddled. As the plot moves forward, viewers will likely find themselves far more invested in one group than the other, leaving the latter group feeling a bit more like an opening act before the band you really came to see.

The charisma between Alan, Ellie and Ian continues to feel authentic and highly enjoyable, even as the characters engage in action scenes that remind us that this movie was made in the 21st century. In fact, those in it for little more than the dinosaur carnage will giggle with glee at the sheer amount of dino destruction unleashed in this flick. What the movie somewhat lacks in story, it more than makes up for in action scenes and a loud Michael Giacchino movie score, both of which take up much of the film’s runtime.

But by this point, you likely already expected that. It’s part of the Jurassic franchise—and it wouldn’t be a Jurassic movie without things going utterly wrong resulting in needing to escape a series of increasingly dangerous dinosaurs. I know the formula, you know the formula: Life finds a way, yadda, yadda, yadda.

But perhaps the simplicity of running from dinosaurs is what makes the franchise so popular: viewers can rest easy knowing the biggest content issue is going to be the sharp chompers of a hungry carnivore. But just as each installment brings bigger and badder beasts, the franchise also brings a larger number of profanities for the audience to sift through—including many s-words and misuses of God’s name.

With that in mind, it’ll be up to parents to determine whether or not they’d like to endorse this park.