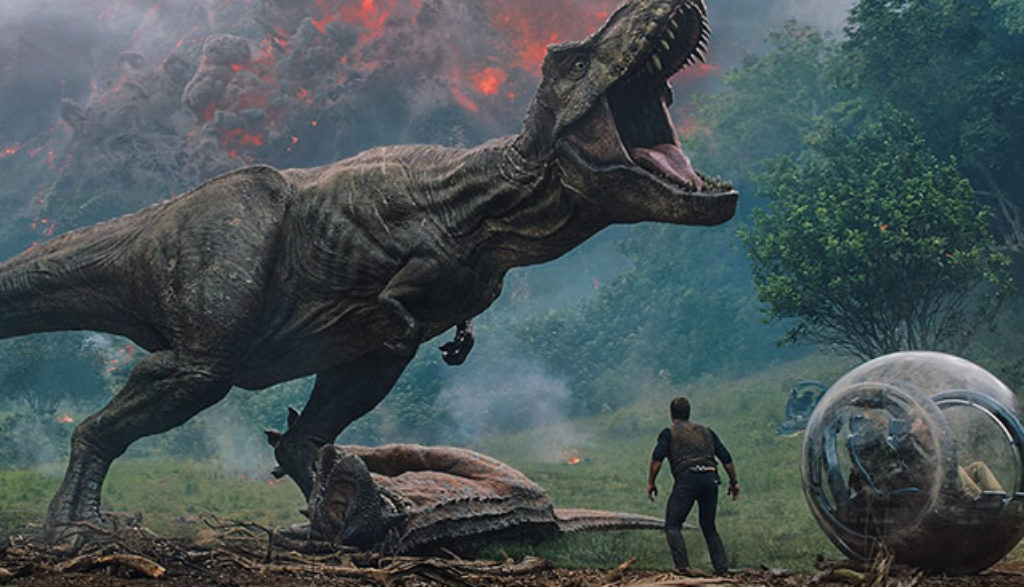 Claire Dearing is different now. She’s had a change of heart.

Whereas she used to be all about the business of managing the dinosaur theme park Jurassic World, she’s now much more invested in protecting the endangered creatures that once populated that mega-vacation attraction.

All it took was watching the place be destroyed. And seeing thousands of panicked, screaming people run for their lives from raging dinosaurs. And … nearly being ripped apart by those prehistoric beasties herself.

Now, you’d sorta think she might be ready to see those massive deadly monsters returned to the “extinct” side of the ledger after all that. But Claire has actually discovered a humane side to herself that she didn’t know was there. So when one of the men who created the original Jurassic Park—a billionaire named Benjamin Lockwood—offers his help in saving the creatures, she’s more than willing to become a part of that rescue endeavor.

Lockwood is offering a vast new island home for Tyrannosaurus, Pachycephalosaurus and 10 other dino species. It’s an isolated place where they’ll be free to roam with no fences, cages or tourists. Claire just has to join a party that’s going back to the devastated Jurassic World park and gather up as many dinosaurs as possible. With her help, they can unlock the resort’s security systems and transport the creatures to safety before a newly active volcano destroys everything. (As if catching dinosaurs wasn’t a big enough challenge already!)

Of course, to capture the incredibly intelligent raptor named Blue—an advanced velociraptor that surely deserves more study—they’ll also need one Owen Grady as part of the rescue effort. He was key to Blue’s training. He was also pretty sweet on Claire. So it all sorta works out.

What Claire, Owen even Mr. Lockwood don’t know, however, is that not everyone involved with Lockwood’s supposed rescue effort is on the up-and-up. In fact, some still see those resurrected reptiles as a means to making a fortune. There’s even one individual who’s reequipped an old lab site and started a new program to create aggressive hybrid dinosaurs that wealthy madmen and world despots will pay handsomely for.

All that guy needs is the right blend of dinosaur DNA. And Benjamin Lockwood is going to unwittingly finance all of the DNA-gathering that this hidden agent’s plan requires.

Sure, mixing nefarious money-making schemes with ferocious three story-high dinosaurs hasn’t ended well in the past. But, just like Claire believes, this time everything will be different.

Just as we saw in Jurassic World, Owen and Claire reprise their roles as heroic sorts who are willing to lay their lives on the line to protect others. They have a keen desire to save some of the endangered dinosaurs, too. Owen, for example, raised the raptor, Blue, and the bond they share is still evident. The two of them also go out of their way to protect a young girl who’s caught up in all the dangerous dinosaur chaos.

A number of people—including Claire and an important character from the franchise’s past, Dr. Ian Malcolm—debate the moral and ethical considerations of recreating extinct species, then purposely striving to either save or eliminate them once more. Mr. Lockwood suggests that he comes down on the side of his former partner, John Hammond, who suggested, “These creatures don’t need our protection, they need our absence.”

Some politicians state that “the Almighty” is taking the dinosaur matter into His hands and deciding the creatures’ outcome. But Dr. Malcomb retorts that God has nothing to do with any of it.

Claire displays some cleavage. She and Owen flirt and kiss.

The violence here is very much what we’ve come to expect of this long-running franchise. Dinosaurs rage and roar and pursue. They bare huge, sharp teeth and slash at humans and other dinosaurs with long, knife-like talons. The creatures sometimes swallow fleeing people whole. And soldier types with automatic weapons regularly spray dino-infested areas with lead, too.

Sensitive younger viewers will likely find the creeping danger of some of the snarling and powerful-looking beasts to be the most intense, though. One series of scenes features a savage creature slowly tracking and crawling up on a young girl who quakes and cries in fear in her bed.

More visceral flesh-rending moments include a guy having his arm torn off and devoured. Another human victim is ripped limb from limb by cold-blooded beasties. We see people in a crowd hurled high into the air by charging reptiles and a large number attacked just off-camera. An erupting volcano adds another level of deadly danger to the mix as it spews large chunks of burning lava that set the jungle scenery aflame and strike objects, dinos and people like molten-metal bombs. That flaming shrapnel also ignites a fuel depot.

Claire, Owen and several other human heroes find themselves running, leaping and dodging deadly slashing things, as well as dangling from perilous perches. A holding area full of dinosaurs begins to fill with hydrogen cyanide gas, threatening to kill them all.

All of that said, the film only shows us small spurts or splashes of blood. It keeps the graphic messiness of the more severe flesh-rending just out of the camera’s view. A young guy getting hit in the face with a splash of dinosaur blood, Claire having her leg skewered by a long talon, and a goat being chomped and chewed by a T. rex are actually the goriest moments on display here.

Elsewhere, an elderly man is murdered when a pillow is held over his face (again, off-camera). A trophy-collecting human uses a pair of pliers to rip teeth out of the mouths of dead and unconscious dinosaurs.

Claire and Owen drink beer together, and she gets a bit tipsy and silly. Tranquilizer darts immobilize several dinosaurs. Owen gets hit by one of those drug-filled darts, too, and he’s almost totally paralyzed for a short period.

Greed compels some baddies to unleash the dinosaurs and, subsequently, quite a bit of violent death on crowds of people. Greed also drives one guy to create an incredibly intelligent and deadly predator with no regard for what havoc this lethal monster might potentially unleash.

We’re five entries into the Jurassic film franchise—a bring-dinosaurs-back-to-life series that was brought back from the brink of extinction itself by 2015’s surprise hit Jurassic World (which became the fifth biggest movie, internationally, of all time). This newest scenery gobbler packs capable heroes (played by actors Chris Pratt and Bryce Dallas Howard), greedy villains, some discussion about the rights of endangered creatures, a pernicious new predator … and all the CGI luster and bombast that $170 million can buy these days.

For all of the obvious effort poured into mimicking every roaring, flesh-rending beat of its own blockbuster formula, though, Jurassic World: Fallen Kingdom feels rather fossil-like. Yes, it will still be an intense and sharp-clawed experience for the youngest in your herd. But everyone else will recognize all the twists before they happen, anticipate every dire warning before it’s been murmured and know every mark before it’s been hit. The result? This pic feels like a weak, pale derivative of all the Jurassic monster movies that have come before it.

Now, that may be just fine by you. If you know exactly how close that raptor’s talon will get before it’s pulled back, and precisely when to expect the “good” dinosaur to jump in and save the day, well, you won’t have to worry about anything truly unexpected.

But while we’re once again pondering the ethics of recreating or exterminating deadly creatures crafted from excavated DNA, it’s easy to wonder if this long-toothed, munch-a-man moviemaking template has been dug up too many times as well.