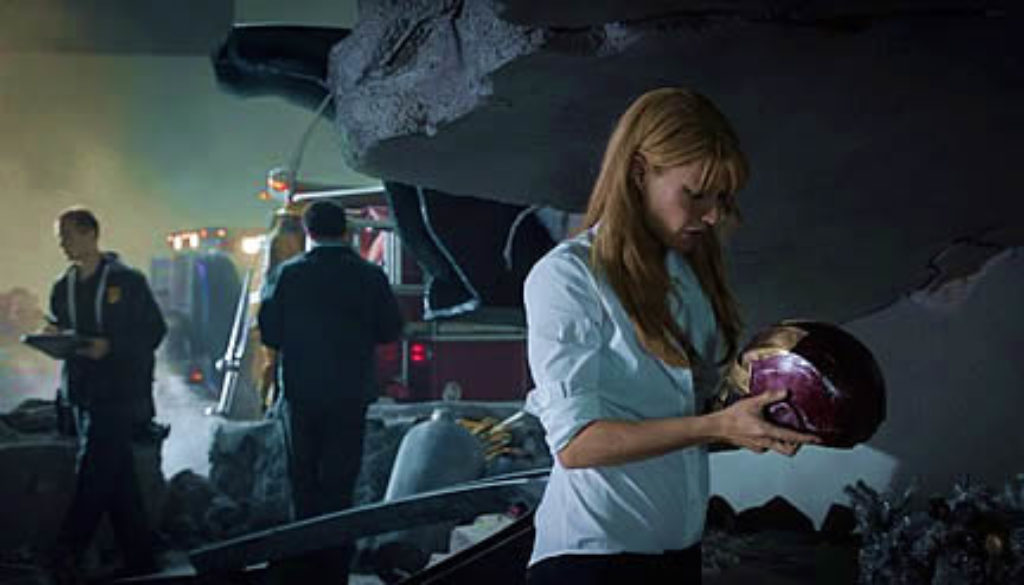 It’s been said that clothes make the man.

Sure, God may care what’s on the inside, but the world is different. What we wear becomes social shorthand, a way to discern and judge and often misjudge the people we meet. An oil-stained shirt and pair of overalls tells us something. An Armani suit says something else. An emblazoned T-shirt might trigger a chuckle or a school suspension. We cover ourselves in cotton and cashmere and designer labels, and there’s a danger that we can lose ourselves underneath it all.

For years, Tony Stark has been defined by his suit—not a cotton or wool or silk number, but a blend made from exotic metals and embedded computers and super-powerful mini-engines. Sure, he may still be a genius-billionaire-playboy-philanthropist underneath it all. And yet, strip the iron from Iron Man and you have, merely, a man.

Stark is feeling all too mortal these days. He can’t sleep. He’s subject to debilitating panic attacks. His Avengers-sponsored sojourn to New York left the man a shell of his former self—funny, given that the man’s self-made shell has embodied him for so long.

But evil cares little about Tony’s lingering psychoses. Whenever Iron Man strikes down one threat, another rises to take its place, and this time it’s embodied in the Mandarin. Bedazzled in rings and cloaked in mystery, this bin Laden-style leader hijacks America’s airwaves and promises to shower death and terror on the nation’s people.

And when one of his attacks injures Tony’s longtime bodyguard, Tony’s had enough. A furious Stark calls out the Mandarin in the media, inviting the terrorist to stop by for a taste of terminal justice. The Mandarin does—by proxy. Helicopters blow apart Stark’s Malibu mansion, burying the billionaire’s high-tech toys in rubble or ocean. And while Iron Man still lives, his metallic shell has been rocked to its core, energy sapped, defenses breeched, computerized brain useless.

Tony Stark is a superhero emperor without clothes, a genius-billionaire-playboy-philanthropist without a supersuit. He lives, yes. But without his metallic cocoon, is he still a hero? Can he still save the world?

Tony Stark is at times stripped of his iron in Iron Man 3. And that allows for this bit of positivity: We see that the suits are mere tools. Because Tony’s forced to go without his armor, we better see his less digitized attributes. His brains. His ingenuity. His relentless drive.

The underlying message—that even the best technology is only as good as the people using it—is timely. There are moments when many of us can turn to the latest manmade invention as a savior of sorts, be it a new weapon or medical advance or smartphone. And yet we see here that they, like Iron Man’s suits, are merely tools that can be used for whatever ends we choose.

Of course we see plenty of traditional superheroism as well. Iron Man saves loads of people during this cinematic adventure. But he, in turn, is saved … by girlfriend Pepper, by Col. Rhodes, by a kid he meets in Tennessee. So the point is again driven home that we can all be heroic. We can all do good work even if we don’t have a superpowered jumpsuit.

We also hear ruminations on the nature of evil—a force that’s pretty sneaky here. “We make our own demons,” Tony says—demons often born of our own compromises and mistakes. And as such, Iron Man 3 offers two distinct morals: We need to be careful in what we do and how we act toward other people. We must try to avoid compromises because they’ll likely corrupt us in the end. But the movie insists that we can also overcome our mistakes if we have the courage and determination to do so.

There’s little overt spirituality here. But Tony and others make several glancing religious references. As mentioned, Tony classifies evildoers and crises as “demons.” When he and Rhodes face off against a cadre of evildoers, Tony says, “It’s Christmas. Take ’em to church.” He says that the Mandarin speaks like a “Baptist preacher.” We see crosses at a memorial.

Tony visits the scene of a disaster with a kid named Harley. The bomb blast was so hot it vaporized the victims and left their shadows on the surrounding walls. So, why five shadows when six people died, one being the bomber? The shadows indicate that the victims were accepted into heaven, Harley tells Tony (recounting a local legend). The fact that the bomber had no shadow means he went to hell. (Tony is skeptical.)

We hear references that our bodies and minds are essentially machines and computers “destined” for an upgrade.

Though the Mandarin is not apparently motivated by religion, the images we see of him will remind many of Middle Eastern terrorists typically inspired by radical Islam.

Tony and Pepper are now officially an item, and the two live together. We see them kiss and share a bed. We hear Pepper invite Tony to take a shower with her.

We’re also witness to a flashback to 1999 and Tony’s womanizing past. He goes up to a hotel room with a promising female scientist; she wants to show him her research, but he’s far more interested in her. They trade sexual innuendo before falling into bed together. (The next morning Tony’s gone.) Credits include clips of previous Iron Man movies showing Tony with several scantily clad beauties.

Lots of women strut about in bikinis and other skin-baring tops. We see Pepper in her sports bra. (Tony asks why she doesn’t dress like that around the house.) Other women wear just bras and panties. A man is in the company of two women, both of whom wear negligees and share his bed. Various sexual and anatomical allusions are made.

After Pepper kills a bad guy (for what would seem like the 14th time), she turns, horrified, to Tony. “That was really violent!” she says.

And she’s right. In fact, the whole movie is really violent. And while we’ve certainly come to expect a level of chaos and carnage in these sorts of superflicks (I’ve yet to hear of a superhero film based on the exploits of the Avenging Pacifist), this one comes with more of an edge than you might expect.

The first act of terrorism we witness takes place in Hollywood’s Chinese Theatre, filled with innocent tourists who are (mostly) utterly vaporized. (We see Tony’s bodyguard lying on the ground, his face severely gouged.) The scene might make some moviegoers think of the Boston Marathon bombings, and indeed, the Mandarin makes it a point of pride to hit America in the fashion of a terrorist—striking out at civilian targets and gloating over the results. He talks about how his men attacked a Middle Eastern church filled with the spouses and children of American military personnel, comparing it to the 1864 Sand Creek, Colo., massacre (when American troops killed Native American women and children while the braves were away).

But even discounting moments of uncomfortable real-world parallels, some of the scenes here are still downright disturbing. The evildoers don’t make use of mere suicide bombers, but people who actually explode—heating up from the inside out until they pop like kiln-heated sausages. There is very little gore, but the people in the throes of this transformation are obviously in horrible pain, and we see the heat radiate from their skin, eyeballs and mouths. We see veins and bones outlined by the literal light from within.

You can probably guess from all this that the body count is pretty high, what with the innocent civilians destroyed by the Mandarin’s men and the scads of evildoers laid low by Tony, Rhodes and their phalanx of armor-plated suits. People are bashed and smashed and crashed. They get hit with fists and feet and bullets and jet-like weapons and flying metallic gloves and grand pianos. They’re burned or superheated or submerged in water or thrown into walls or plunged into massive fires or flung from aircraft.

We see someone’s mangled body hanging lifelessly from telephone wires. Another person has an arm sliced off. An attacker is choked with a pair of handcuffs before her neck burns through the metal. It’s suggested that someone takes a bullet to the head live on television. We see images of war and violence on TV. A man is strung up above an immolating pool of oil.

Tony spends the majority of the movie wearing blood on his face. He painfully injects sensors into his arms. He crashes in his suit. His suit crashes into him. Pepper is manhandled, nearly strangled and, in a way, tortured. And I should note that some of the bad guys are gals, which triggers some pretty serious, pretty up-close-and-personal—violent—battles between the sexes. We hear how someone contemplated suicide.

A villain admits to having substance abuse problems before his evil employees found him. Tony asks if they helped him get off the stuff. No, the villain says. “They offered me more.” We see him drink beer. Others down wine and champagne. Tony lounges in a huge wine cellar.

Tony makes light of Harley’s father leaving the family. A super-smelly bathroom serves as the setting for a joke or groan or two.

The original 2008 Iron Man was, arguably, the film that truly launched our current era of supercharged summer superhero blockbusters. Yes, Spider-Man was a huge hit in 2002 and Batman and Superman had success well before then. But until Robert Downey Jr. slid into his CGI suit and helped its makers collect an unexpected $318 million domestically, the true potential of the multiplex superhero had not been fully appreciated.

But I’ll argue that it was the story, not the CGI, that propelled Iron Man to such heights. There was narrative power behind all the splashy special effects—an almost spiritual spotlight of sorts that tracked a shallow, shortsighted man on a journey of penance and redemption.

And that makes Iron Man 3 a bit of a disappointment.

Oh, it’s splashy and exciting and filled with Downey’s roguish charm. There were certainly moments of heroism, bravery and sacrifice. And perhaps the spectacle alone will make this, for some, an all-time favorite.

And yet there’s a promise unfulfilled here, particularly if this is (as is rumored) Downey’s last turn in the Iron Man suit. All the movie’s high wire hijinks betray, in a way, the promise of the trailer—which suggests this Iron Man flick might have the weight of the first, or the depth found in Christopher Nolan’s Batman trilogy. I had hoped to be inspired. Instead, I was merely entertained.

Iron Man 3 is what you’ve come to expect from a standard superhero movie, then. It’s chock-full of glossy graphics. It boasts frivolous (kiss kiss) sensuality and mounds of discomforting (bang bang) violence. It’s somewhat ironic, I suppose: A movie that forces Tony Stark out of his suit is itself unwilling to take the same chance, cocooning itself in piles of popcorn when it could’ve showed us its soul.