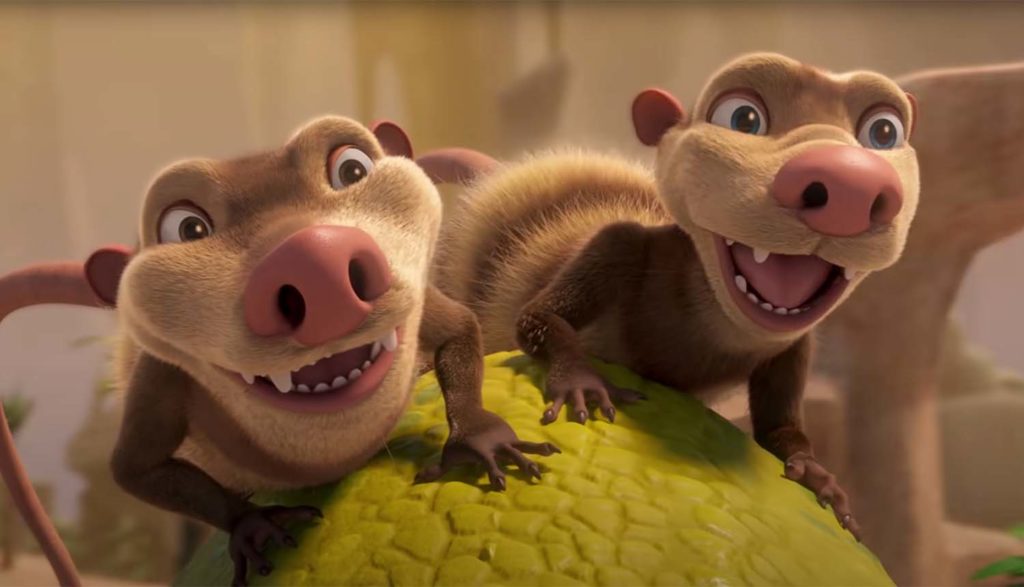 So say Eddie and Crash, aka Crash and Eddie, twin possums who’ve survived everything from doomsday meteors to doomsday meltdowns in the Ice Age film series over the last 20 years. And they’ve made it this far—to the cusp of near-possum-adultdom—thanks to their posse of caring guardians, especially their adopted mammoth sis, Ellie.

Good thing that herd has been there for the pair. Because, let’s be honest: Eddie and Crash aren’t the most mature mammals around. And a possum’s greatest natural defense—playing dead—is not terribly effective against global warming.

But Crash and Eddie have decided that they’ve had it up to here with all that protective nurturing. They’re done with all of Ellie’s compassionate strictures. “She’s smothering us with reasonable advice!” Eddie (or possibly Crash) tells his brother.

So, after a little egging on by Ellie’s exasperated mammoth main squeeze, Manny, they decide to leave their herd and make their way back to the Lost World, a tropical underground haven filled with dinosaurs and giant spiders and carnivorous plants. That’ll be a great place to start their new lives, they figure. Plus, they’d sure like to get some tips on how to live a life of adventure from their old weasel pal, Buck Wild.

And sure enough, they find him—after they’re attacked by dinosaurs and spiders and nearly fall to their squishy ends.

“Thanks for dropping in,” Buck says. “Will the rest of the herd be falling from the sky, too? I don’t think I could catch the mammoths. One, maybe.”

But the brothers say nay. “We’re independent! The both of us! Together!” says Crash (or perhaps Eddie).

That independence may be literally short-lived. Apparently, the Lost World isn’t such a haven anymore—at least not for mammals. A gigantic-brained dinosaur named Orson means to conquer the whole place, kick out all those pesky warm-blooded varmints and turn it into a dinosaur empire—an empire ruled by Orson, of course.

Back in the day, Buck, with the help from a team of prehistoric all-stars, quelled Orson’s ambitions. But most of his pals apparently perished in the process. Only one—a skunk-like female friend named Zee—is still alive and breathing, as far as Buck knows. And when Buck and Zee renew acquaintances, it’s pretty clear they’re both toting hard feelings about the last time they tangled with Orson.

Still, Orson must be dealt with again. And maybe Crash and Eddie can help. “What they lack in intelligence, they make up for in bumbling ineptitude,” Buck says.

Also, they play dead quite well. You can’t discount that.

The Ice Age movies have a constant ethical thread that runs through pert near every film: Families, as weird as they might look and as aggravating as they can be at times, are pretty awesome.

This one adds a new layer onto that familial narrative. There comes a time when families do split: Kids leave the nest. Folks move away. That’s the way families (often called herds here) work. But no matter what, they’re always still part of that family. “The only thing that stays the same is the love we have for each other,” Ellie says.

We see that dynamic played out here, albeit imperfectly. Certainly, few would say that Crash and Eddie are ready to live independent lives. And when they do leave, their herd—Ellie, Manny (the mammoth) Sid (the sloth) and Diego (the saber-toothed tiger) rush out to rescue them.

Buck, too, has lost part of his “family.” He believes most of his compatriots are gone. The one who remains, Zee, isn’t all that fond of him right now. And at first glance it would seem that Crash and Eddie are poor replacements. But Buck does his best to protect these visiting possums. In due course, they form part of a new “herd.”

And, of course, Zee and Buck don’t stay on the outs forever. When Buck needs a bit of rescuing himself, the makeshift team of Zee, Eddie and Crash dives into the perils of the Lost World to save him. And as they pursue this dangerous quest, Crash and Eddie discover that they can do more than just play dead in the face of danger: They can stand up to it and fight back, if need be.

Buck’s old teammates are sometimes referred to as “superheroes,” and the possums marvel at Zee’s “superpower” (her ability to spew an odious scent if the need arises). But Buck tells Crash and Eddie that powers aren’t what makes superheroes: “It’s resourcefulness and courage.” That proves to be true. And teamwork proves to be a big help, as well.

Buck strikes a Zen-like pose. Crash and Eddie ponder just how many catlike lives they have to spend: It’s either four or 11, they reckon, but they can’t quite remember.

None, apart from the mild suggestion that Zee and Buck seem like they’d be a good match (perhaps when their situation is less desperate).

The Ice Age Adventures of Buck Wild sports plenty of comical, slapstick violence throughout. No one seems to get seriously injured: In fact, the only critter that seems to suffer much here is a kindly Tyrannosaurus rex. (She has a big ol’ painful hole in one of her teeth, and she’s knocked unconscious so the problematic incisor can be removed.)

Still, plenty of characters could suffer mightily—especially if Orson has his way. Characters are threatened with death or bodily harm, and we see a full-scale battle between Orson’s posse of velociraptors and a ragtag group of defenders. Creatures fall from seriously high heights and smash into walls. Crash and Eddie sometimes hit each other like punching bags, and one of them gets gulped by a carnivorous plant. (Buck makes the plant spit the possum out before any serious damage is done.)

Velociraptors are incapacitated by the blunt edges of hurtling knives. Other raptors get knocked about by the tail of a dizzy T-rex. Still others are pelted with tiny rocks and/or berries shot out of blowguns. And lots of creatures are overcome by Zee’s odor.

Crash and Eddie jump rope with a couple of wildly poisonous snakes. (They’re apparently immune to poison.) Tiny lizards breathe fire. A massive avalanche destroys a herd’s “summer habitat.” In a flashback, we see a few mammals and dinos fly to their suggested doom. In another flashback, Ellie and the possums mourn at the graveside of their mother possum. Rocks tumble and nearly crush a couple of characters. A giant spider attacks. We hear that a T-rex is “15 tons of deadly vicious terror,” and that she could easily split someone’s “top from your bottom.”

None, though a T-rex staggers about almost drunkenly after getting gassed a bit.

When the possums feel like they’ve been challenged to make their mark on the world, one protests, “I make my mark every day! I just lift my leg and do it!”

That’s the only real instance of bathroom humor here. But families should still be aware of Zee’s bad-smelling “superpower.” She’s just doing what skunks (more specifically, the skunklike Zorillas) do, but it’s clear that her gasses are pretty noxious—capable of rendering pretty much everyone (except for the immune possums) unconscious. When she tells the possums that she needs to “refill” after shooting off some gas, one brother says, “TMI, dude.”

A map includes a locale called the “Tarpit Armpit.” One velociraptor mimics Orson relentlessly—an annoyance that many a brother or sister could relate to.

With The Ice Age Adventures of Buck Wild, the Ice Age franchise moves to a smaller screen (it’s being released solely on Disney+) and into new-ish territory. Oh, not literal new territory; our troupe of characters has visited the Lost World before, of course. But this feels more akin to a spinoff than a true sequel. Manny, Diego and Sid move well to the background in this comic adventure: Buck, Zee and the possum twins take to the fore, perhaps laying groundwork for Buck’s future adventures and slightly unhinged derring-do.

Perhaps the franchise wanted to focus on a handful of animals that aren’t, y’know, technically extinct.

Like the prehistoric mammals and dinosaurs we still see traipsing about, the franchise’s strong moral core is very much alive. Sure, it doesn’t necessarily sport the onion-layers of meanings you might notice in the best of Disney or Pixar. But The Ice Age Adventures of Buck Wild does encourage young viewers to explore and test their limits, all while reminding them that the “herd” will always be there for them. It tells us that just because family members might move out and move on, they don’t ever move out of our affections.

Not everything here smells completely fresh, of course. Zee literally gives off quite a stink, and you do have just a touch of bathroom humor and a bevy of slapstick violence to navigate. But it might be a bit less problematic than some other installments of the Ice Age franchise.

Buck the weasel has a few issues himself. For one, he occasionally carries on conversations with his left hand. But Plugged In will use both of ours, metaphorically speaking—to applaud this lightweight family romp.