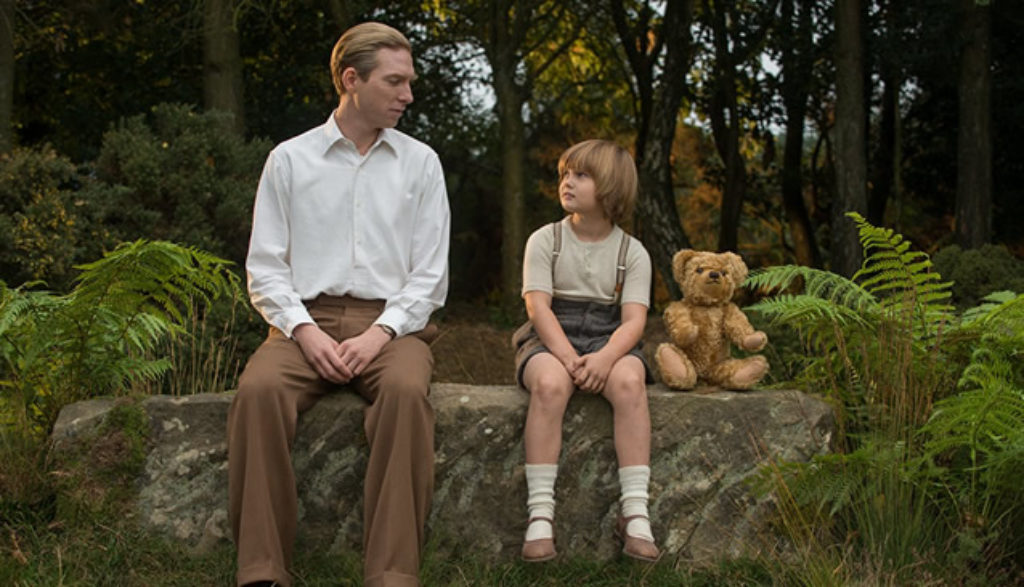 World War I may be over. But for playwright Alan Milne, it still feels very much alive.

The British writer recently returned from the battlefield. But now, sounds as simple as a popping cork or a clicking heel can instantly send Milne reeling into the dark, violent recesses of his memory. (Posttraumatic stress disorder, we’d call it now.)

His wife, Daphne, tries to help. “If you don’t think about the thing, it ceases to exist,” she suggests. But this doesn’t ease Milne’s troubled mind. Even having a newborn son, Christopher Robin (whom the family calls Billy Moon), does little to take the edge off Milne’s haunting memories.

After much deliberation, the writer decides he needs to get away from the chaos of London and retreat to a place where he will be able to think. He tells Daphne he no longer wants to make people laugh, as his famous plays have done. Instead, he says, he wants to make them see.

Soon, Milne Daphne, Billy Moon and Olive (the family nanny) retreat to the countryside to find solace and rejuvenation in the quiet of a vast wooded estate. (Which was actually 500 acres, not 100).

Even that pastoral homestead, however, isn’t as quiet as Milne had hoped. Popping balloons, buzzing bees and snapping sticks all recall the terrors of war for him. No matter what he does, Milne is unable to escape his own troubled mind long enough to write.

And a despairing writer is more than his wife can handle.

One day, Daphne informs Milne that she is returning to London. She warns him that she will not return until he begins to write, because only then (she believes) will be his true self once again. And Olive, the only one who truly knows how to love and care for Billy, soon makes the hard choice to tend to her dying mother, leaving Milne and little Billy Moon all alone.

The inexperienced father has no idea how to care for his son. He knows little of cooking, and treats the little boy as a nuisance. One day, almost at the breaking point, Milne decides to go for a walk in the woods, little Billy Moon trailing behind.

It’s a serendipitous decision, and the first of many such explorations in the family’s forest. Billy helps Milne to realize that bees are good, that sounds are only sounds and that even popped balloons can be fun.

As Milne slowly recovers, he is drawn into the world of his son’s imagination with the help of his stuffed animal friends: Winnie the Pooh, Tigger, Piglet, Eeyore, Kanga, Owl and Roo.

The stuffed animals come alive before Milne’s eyes as they pretend to play in the snow, eat dinner and enjoy endless adventures. And Milne realizes his desire to help people understand the hard realities of war has been quietly overshadowed by his growing desire to bring happiness and hope where all seemed lost.

Billy Moon asks his father to write him a book and shortly thereafter, Winnie-the-Pooh travels from imagination to the written word. But Billy (and A.A. Milne, for that matter) never could have foreseen how the fictional Christopher Robin’s growing fame would complicate their relationship as the real Christopher Robin grew up in the tumultuous years that followed.

Milne’s relationship with his son is in many ways a difficult one, as we’ll see. But some positive things do flow from it.

As father and son spend time together in Billy Moon’s fantastical world, they connect deeply. Imagination, play and childhood innocence become Milne’s saving grace, as the life of a child sparks his creativity. Billy Moon also helps his father develop the backstories and personality of each character. For instance, he says the name Tigger is better than Tiger because “it’s more Tiggerish.”

As the movie progresses, it illustrates a cautionary message of sorts about the importance of family bonding. Quite frankly, Milne and Daphne aren’t very good parents. They may have occasional good moments as a family, but these seem rare. Olive, the nanny, is the one who’s really raising Billy Moon. And his parents’ absence and willingness to use him to make money (more on that below) takes a toll on the boy—not just early on, but later in life as well. That said, the film also clearly suggests that using one’s child as a marketing ploy is a choice that comes with a high cost for everyone involved.

At one point, Olive tells Milne and Daphne that they’re exploiting his son for gain. Milne, to his credit, ultimately responds positively. He does his best to cancel interviews and public engagements, telling Billy Moon that he will no longer have to worry about the pressures of fame because he’s not going to be writing any more Pooh books.

Adult Billy Moon recognizes how his father’s literary creations brought hope and joy to millions, even though they also made his childhood a difficult one. (That said, in real life his relationship with his mother ended in years of estrangement, so much so that he refused to visit her even on her deathbed.)

Speaking about his own experience in World War II, Billy Moon later tells his father that as he sat among frightened soldiers, they would sometimes begin to hum Pooh’s songs, taking solace in something innocent and good amid the horror and atrocity of battle.

Olive teaches Billy Moon to pray at this bedside every night before he goes to bed. In one scene, Billy prays asks for blessings on his family and himself.

Milne and Daphne kiss several times (once in bed).

The film’s opening scene includes images of bombs exploding in a World War I battle. We see dead soldiers in trenches with flies swarming their bodies.

Daphne screams in agony as she gives birth to Billy Moon. Milne hyperbolically warns his son not to lift his fork and knife upward, as (he says) someone could land on them and become impaled, with blood oozing on his eggs at breakfast. Bullies target Billy Moon at boarding school, repeatedly taunting him and shoving him down the stairs.

Several scenes show characters celebrating with champagne. We hear a reference to sherry.

Both Milne and Daphne have a difficult time connecting emotionally with Billy Moon. Milne did not know how to interact with him as a baby, or even how to carry the child. It’s not until Billy Moon is almost old enough to take care of himself that Milne begins to connect with him emotionally.

As Billy Moon grows up, his parents miss his birthday while travelling to the United States to promote Winnie-the-Pooh. Milne calls to wish him a happy birthday, but Billy realizes it was done for a radio broadcast and wasn’t genuine. Other times, his parents tote him around to various interviews and meetings, usually worried more about public appearance than the emotional well-being of their child.

Billy Moon begins to realize that he feels neglected by his parents. At one point, he says that there is no one who truly loves him. He feels this lack especially keenly when Olive begins courting a man named Alfred. Billy Moon doesn’t take well to the man, seeing him as competition for Olive’s affection. In that moment, it’s clear the boy’s relationship with Olive is stronger than the one he has with his own parents.

Olive finally confronts Billy Moon’s parents, telling them that they’ve been exploiting him. Daphne, especially, responds poorly, while Milne is mostly silent as he listens to what the nanny has to say. Daphne angrily tells Olive it’s her fault Billy has been upset and feels unloved; Daphne is also unsupportive of Olive’s courtship and possible marriage.

Daphne leaves the family at one point to go to London for an extended period of time. She doesn’t give any explanation when she returns about what she did while she was gone. It’s clear, however, that she has a bit of a wild streak. Daphne’s shown once at a flapper dance. And she talks about her desire to visit a speakeasy when she’s in the United States, much to the dismay of Milne’s publicist.

Winnie-the-Pooh is a timeless classic, featuring a honey-loving bear with a forest full of animal friends.

But the true story behind it is more complicated.

A.A. Milne, like many writers, hoped to impact the world with his words. And though he initially sought to write about pacifism, he gradually realized that what the world needed was something more. The world needed hope.

His son’s delightful innocence and vibrant imagination subsequently played a huge role in inspiring Milne’s iconic, hopeful story. But along the way, the real Christopher Robin’s innocence and wonder are tarnished, too.

In the end, Billy Moon acknowledges the wonderful legacy of his father’s Pooh books. But his cautionary tale also helps viewers see the real cost to children whose parents objectify them (even if unintentionally) at the expense of loving and protecting them well. Milne eventually realizes the error he’s made with his son, but not before a lot of emotional damage is done.

That’s the nuanced, bittersweet story told in Goodbye Christopher Robin, an “origin story” of sorts that might prompt you to see Winnie the Pooh in a slightly sadder light.

For more on this film’s themes and how they’re surprisingly relevant today, check out Paul Asay’s blog, “The ‘Trespassers Will’ of Childhood.”