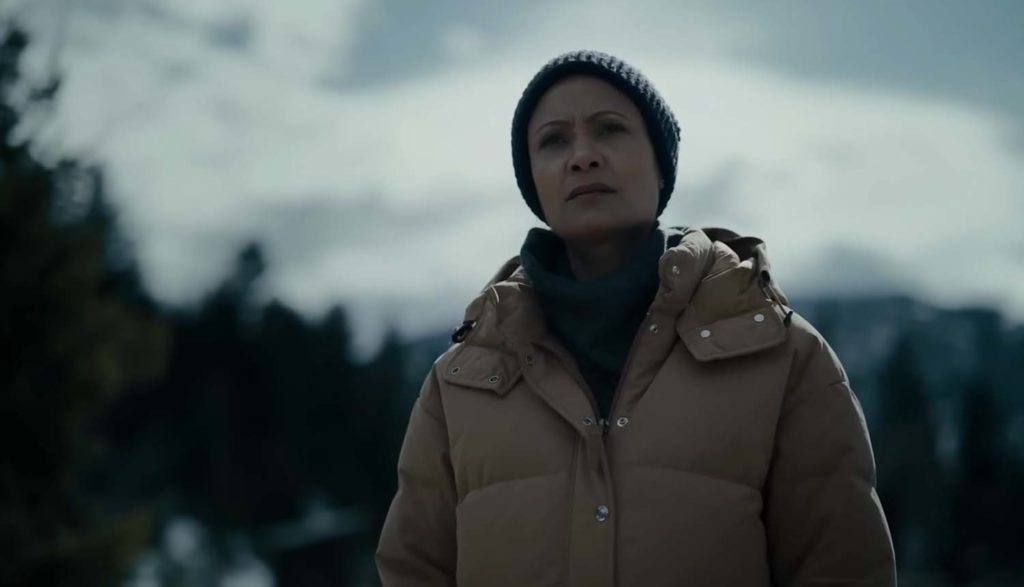 When someone you dearly love dies, it can become a time of self-reflection and remembrance. And that’s exactly what happens with Sandra when her mom—whom Sandra has taken care of in these last, declining years—passes and leaves their mountain cabin home feeling so empty.

Sure, Sandra is still teaching at the nearby local college. But so much of her time remains to gather up her mother’s mementos; to clear out old clothes; and gaze at discovered cards and pictures. Perhaps that’s why, in all that quiet, that small injustices around Sandra seem to cry out so loudly.

It all starts with an old Ford pickup truck parked on her snowy property, just down the road from her home. I mean, it shouldn’t be that big a deal that hunters are parking there and hiking up to hunt in the forest and hills. But it’s the principle of the thing.

Besides, she doesn’t want men with guns and bows stomping around anywhere near her place. So, Sandra walks out to the truck and leaves a polite but straightforward note on the windshield. That same day, she finds the crumpled note on the ground next to a bloody, torn-open bird carcass.

When the men show up again, she has words with them. Direct and firm words. They’re brothers, and one of them gives off aggressively angry vibes. But that doesn’t quell Sandra. In fact, when they don’t heed her warnings and then park in that spot again, she jimmies open their truck door and tows their vehicle down the hill.

That night, an arrow thumps into the front of Sandra’s cabin.

The next day she calls in the local sheriff.

If you sense that things may be slowly spiraling into places that they probably shouldn’t, you’re absolutely right. But it doesn’t look like cooler heads will prevail in this situation: not the heads of those back-country hooligans or in the head of a former New Orleans cop named Sandra.

The tug and pull only grows harder. And harsher. Oh, and all that supposed space for self-reflection and quiet thought? Yeah, that time has passed.

Sandra is a good daughter who cared well for her failing mom and who laments things from her past. She’s driven by a sense of personal and social justice (though in this case, that’s not always a good thing.) Sandra’s also a very good teacher. And after final exams, one of her students comes up to tell her so.

Sandra has conflicts with local brothers Nathan and Samuel. And though both are painted fairly one-dimensionally, we come to realize that Nathan takes great pains to care for and give of himself to his aging mother. Sandra and Nathan find common cause in that kind of love.

There are nods and winks toward faith and God throughout this film—from Christmas songs on the radio, to an organist playing hymns, to a pastor’s words about God’s goodness. The story’s action is in stark contrast to those brief spiritual allusions.

As Sandra goes through her mother’s things, she finds prayer cards and a cloth embroidered with the first two verses of Psalm 23. She also finds a picture of their family at a church gathering.

When Sandra and Nathan meet at a small church, he asks her, “Do you believe in this stuff?” “I did once,” Sandra replies. Later, she talks about living through the Hurricane Katrina disaster in New Orleans and how her mother believed that “God would save her.”

Sandra wears a low-cut, formfitting dress to a party. We also see her bare shoulders and back in the shower.

Two people are murdered with shotgun blasts (offscreen), and we hear one individual gasping for life before being silenced with a final shot. Someone’s house is set ablaze and burns to the ground.

People are threatened by a group of masked men with chainsaws. Hunters kill a deer and drag the carcass back to their truck. Someone’s dog is shot and left lying in a bloody smear on the snow. A bird’s body is torn open and left in a bloody pile.

A man threateningly calls for a woman to come into his house as she backs away. We hear about a man who was shot by police, as well as a story about the many deaths during Hurricane Katrina. Sandra threatens to kill a man. Nathan punches his younger brother in the face.

God’s and Jesus’ names are abused four times each (two of which mix God with “d–n.”)

Brothers Nathan and Samuel buy cases of beer several times. We see people drinking beer at a bar. And a large group of people drinks wine, beer, champagne and whiskey at a Christmas party. Sandra drinks wine and beer while on her own.

Nathan and Samuel smoke cigarettes on a regular basis. We see others smoking as well.

The film makes clear that either side of this story’s growing, angry conflict could have stepped back and calmed the situation, but no one does. In fact, though she’s correct in principle, Sandra’s self-righteous actions actually drive her to betray a trust and create harmful circumstances.

A man urinates on someone’s doorstop.

On its surface, God’s Country could be labeled as something of a modern-day Western. The good-guy/bad-guy lines are clearly drawn. The cultural and racial conflicts escalate slowly. And you can feel in your bones that eventually there’s going to be a comeuppance.

But that’s too simple of an assessment.

In truth, this film hangs in the air like a redemption-free morality play. We recognize it stereotypical social conflicts, the relational strains and the personal weaknesses on all sides of this story. And we’re left with questions about our world’s choices.

At one key point in the film, Sandra meets up, in a church of all places, with Nathan, a rough-edged guy she’s had conflicts with. Amid musical strains of hymns and pious words about God’s goodness, these opposing forces find short-lived common ground. In an abstract sense, they explore the fallenness of man.

“I wonder sometimes, how much you choose to be the person you are,” Nathan whispers while scratching his stubbled chin and wondering about negative things in life.

“Maybe it takes some kind of sacrifice to break the cycle,” Sandra quietly responds.

But in spite of the ongoing winks at a more spiritual source of choice and sacrifice, Sandra and Nathan move on with their own horse-blindered bad choices.

There are some thoughtful moments, then, to be found and mulled in this slow-burning, well-staged pic. But there are also cutting conflicts, profane language and booze-fueled violent aftermaths to endure as well.