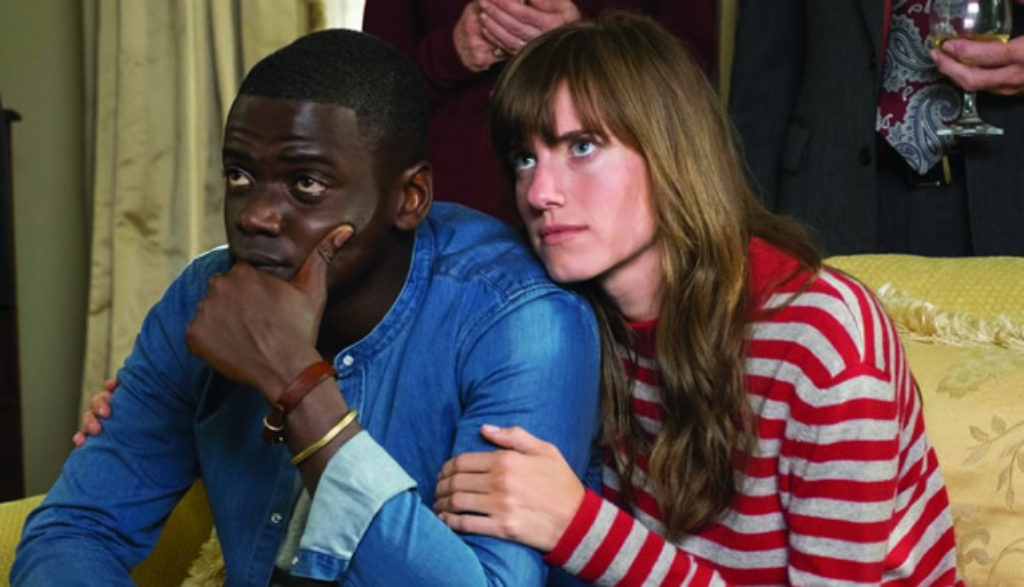 Truth is, we don’t need to guess. Chris Washington, a promising young photographer, is going to girlfriend Rose’s family estate for the weekend to meet her parents, Dean and Missy Armitage. Rose thinks it’s high time. The two have been a thing for five months now. Mom and Dad need to meet the fella she loves.

But Chris is a little worried. See, he’s black. Rose is white. And while Rose has talked to her parents plenty about her special beau, the subject of race just never came up.

It can be pretty nerve-wracking to meet your girlfriends’ parents under any circumstances, but this obviously throws another wrench in the works. No matter how many times Rose assures him that her parents will be super-cool about the whole thing, Chris knows from long experience that being cool with something theoretically and cool with that same thing when it’s sitting across from you at the dinner table … well, things don’t always work out that way in real life.

When the couple arrives, everything is as Rose promised. Sure, there’s some requisite awkwardness. Dean keeps saying “my man” to Chris again and again. He tells him that his father’s claim to fame was losing an Olympic roster spot to Jesse Owens in advance of the 1936 Games. “Yeah, he almost got over it,” Dean says sadly. Missy, meanwhile, is slightly aghast that Chris smokes, volunteering to cure him of the nasty habit through hypnosis. Rose’s brother, Jeremy suggests that given Chris’ size and (ahem) genetic makeup, he would make an excellent mixed martial arts fighter. But they all seem welcoming enough.

But late that evening, when everyone should be asleep and Chris sneaks out for a smoke, he sees one of the Armitage’s black servants (come to think of it, all of them are black) running toward him as if on fire—swerving just moments before he would’ve run right over him. Another servant skulks through the house as if in a trance. And if that wasn’t weird enough, Rose’s mother, Missy, is still up, too—having a spot of tea, looks like. And she invites Chris to sit down for a chat.

And then she tells Chris to sink through the floor.

And he does. Physically, his body is paralyzed, tears dripping from his wide, horrified eyes. His mind peers into the conscious world as if from a dark, cold well, screaming impotently from the depths as Missy stares at him from above … wiping those tears away from his face. And then—

Chris wakes up with a start, gasping, panting, safe in bed. What a weird dream, he thinks to himself.

It’s only later that he realizes he’s not craving a cigarette.

Get Out isn’t exactly the sort of film that viewers turn to for life lessons. It’s a horror movie. And while we definitely have a hero to root for, we’re not so much rooting for him to make the right, God-honoring decision as we are for him to, y’know, survive.

But Chris is an easy guy to root for. He’s nice. He’s polite. Thrust into an unfamiliar, often uncomfortable world, he deals with the passive and patronizing racism around him with good grace and understanding.

Rose seems less inclined to let these injustices slide, though. When a police officer talks to him and Rose on their way to her parents’ house and demands to see Chris’ ID for no apparent reason, Chris is ready to hand it over with a smile. But Rose protests until the officer finally relents. She expresses her horror at the casual racism displayed by her parents. Chris tries to go along to get along, but Rose stands up for him. And standing up against racism in all its forms, both explicit and subtle, is a good thing.

Missy is a hypnotist.

Chris and Rose share a room at her parents’ house, and the two are shown in bed together, both apparently nude. (We see Rose only from the back.) They kiss and canoodle.

At the dinner table, Jeremy recounts a family story from when she and his sister Rose were in high school. He recalls “hooking up” with the prettiest girl in school, describing in detail what they were up to upstairs when Rose’s then-boyfriend barged in, blood running out of his mouth. Apparently the boy tried to French kiss the girl. Rose, both surprised by the advance and unfamiliar with the technique, accidently bit his tongue, we hear.

The Armitages host a party during Chris’s stay. Some of the guests ogle Chris as if he were an exotic animal, with at least one party-goer taking the liberty of reaching out and squeezing his muscles. Someone asks Rose if it’s true that sex is “better” with a black man. There are crude allusions to oral sex and testicles.

[Spoiler Warning] Though Rose says that Chris was the first black man she ever dated, Chris discovers a box filled with photos of her with other African-American beaus (and one apparent girlfriend).

Rose’s car hits a deer while she and Chris are on their way to the Armitage compound. The animal hits the front and hood of the car with a massive bang, and blood smears across one of the headlights. The deer can be heard crying in pain in the forest: Chris goes to investigate and watches as the animal, blood covering its haunches, breathes its last and its eyes go glassy.

Call this a bit of foreshadowing of the horrors to come—and there are indeed plenty of horrors.

Someone gets stabbed in the gut with a mounted, antlered deer head. Blood mixes with bits of broken antler as the victim expires. Another person gets hit in the head with a Bocci ball and stabbed in the leg with a piece of metal. Someone else is slashed across the face with a knife, another hit by a car. People are shot, and one dies by suicide via a rifle blast underneath the chin. Two people are involved in a jarring car crash, and one dies. We hear about the death of Chris’s mother, who was the victim of a hit-and-run accident.

Finally, someone undergoes a brain operation. The top of the patient’s scalp is sliced off, revealing the skull underneath. (We see the bloody, dome-shaped bone in the doctor’s reflection.) Then the top of the skull is removed, too, uncovering the brain (which audiences see straight away). Both skin and skull are tossed in a trash bin with a clunk.

Chris smokes, much to the disapproval of Rose and her mother. Rose throws a cigarette out the window, and we see Chris struggle with his nicotine addiction at dinner, tapping his fingers on the table with a nervous agitation and twisting his napkin. Dean tells Chris that he used to be a smoker, too, but that Missy’s hypnotism cured him of it. Someone else smokes, too.

Dinner features plenty of wine, and Jeremy seems to have drunk more than his fill. Alcohol flows freely at a large party, with revelers walking around with glasses of wine, champagne and martinis in hand.

Get Out is predicated on race, and as such we see plenty of uncomfortable racial interactions. Most are done to reflect the tensions and dynamics in play today. So while they can be problematic in themselves (with some including the n-word), they’re done to illustrate a salient point.

Jordan Peele has made his name as a comedian, one-half of the Emmy-winning, Comedy Central duo of Key & Peele. He’s made a career out of making people laugh.

So naturally, his big-screen directorial debut is … a horror flick?

Get Out does have moments of comedy, some of which would feel right at home in a Key & Peele sketch. But for the most part, this is a straight-up, atmospheric and sometimes totally unhinged horror thriller that also does double duty as commentary on our nation’s race relations.

“Without taking it that literal, this is about the African-American experience,” Peele told National Public Radio. “It’s about the feelings of being an outsider, of being the other that we confront. And also, the presumptions that I make as a black man about others.”

And it can be effective. For instance, the opening scene depicts a black man lost in an affluent suburb, nervous and alone, when a fancy sports car playing what sounds something like polka music drives slowly by, then turns around to follow the man. We can feel the ludicrousness—the comedy—of the situation, but we can also feel the man’s growing fear. Those in the audience, black or white, feel themselves walking for a moment in his shoes.

Fear, the scene suggests, isn’t solely a product of a being bad neighborhood. It’s comes from feeling like a stranger in a neighborhood that’s different from your own. It’s about the other. You’re in unfamiliar territory. Anything can happen.

But whatever important ideas about racial alienation this movie may be trying to illustrate, we also can’t lose sight of how it chooses to express itself—in bloody, profane ways.