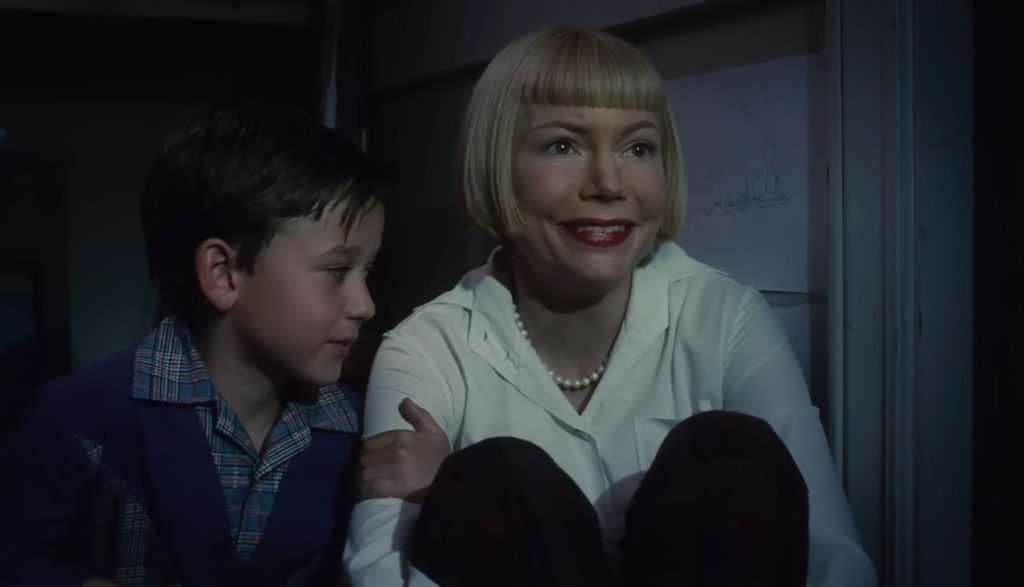 Movies draw emotion out of their audiences. Whether it’s a comedy or a tearjerker, we’re likely going to leave feeling a certain way.

So when little Sammy Fabelman saw the train crash in 1952’s The Greatest Show on Earth, he felt as out of control as the locomotive on the screen. His parents purchased an expensive toy train for him—just to watch him recreate the scene with his own props and crash the locomotive right off the table.

“I need to watch them crash,” Sam said.

That’s when Sam’s mother realized that it wasn’t crashing trains Sam actually wanted. He wanted to feel like he was in control of it all. And so she let Sam use his dad’s camera to record his own train crash so he could watch it over and over again. And little did she know that a seed was planted for the art of filmmaking.

Sam began recording everything, using the plots of famous movies to make his own. His sisters would be his actors. And as Sam got older, his crew grew bigger, his special effects got better, and his equipment became fancier. But as Sam grew in his filmmaking capabilities, the world around him also grew—and Sam’s life began being filled with mature topics and difficult situations.

But though towns changed, and truth seemed to be an ever-fleeting thing, filmmaking remained Sam’s constant pursuit. Because in film, there’s a truth evident in each story—one that makes us feel like all the chaos might just be under control.

Sam’s parents, Paul and Mitzi, offer Sam love and support when he begins making movies (though the more technically minded Paul later admits that he was hoping it would just be a hobby rather than a prospective job). They attend showings of his movies, and they express an interest in how he manages his special effects. As we watch Sam grow, we see his passion for filmmaking grow, too, and his love of the art is inspiring.

Though each character in the film has definitive flaws, it’s clear that the family loves one another despite those issues. Paul focuses more on his job than his family, but his love is evident in his desire to provide for them. Mitzi’s selfish desires sometimes trump her commitment to her family, but her desire to love and raise her children well is also clear.

As we’ll see, some characters here make devastatingly selfish choices. That said, the film does demonstrate just how damaging the effects one person’s selfishness can be to others. Likewise, the story illustrates how painful divorce can be for children.

Sam and his family are Jewish. We see them celebrate Hanukkah, lighting the candles of a menorah and speaking a blessing in Hebrew.

Mitzi receives a premonition—the voice of her deceased mother warning her on a phone—and the event later comes to pass. Mitzi says that “everything happens for a reason.”

We also meet a couple self-proclaimed Christians, but none of them are portrayed in a positive light. One of them is fiercely anti-Semitic, bullying and beating Sam while hurling ethnic slurs.

The other is Sam’s girlfriend, Monica. Her wall is covered in depictions of Jesus (next to other famous non-divine men). Monica forces Sam to pray that Jesus would enter his heart, and she likewise forces him to cross himself. Monica launches into a bombastic televangelist-style prayer, and she tries to physically breathe the Holy Spirit into Sam’s mouth. When the two begin getting physical on a bed, Sam looks up and sees a crucifix looking down at him.

Monica and Sam discuss Jesus on a couple of occasions, usually in order for the movie to make a joke. She says she can’t imagine life without Jesus, and Sam replies that Jewish people have managed it for about 5,000 years. And when Sam buys a crucifix necklace for Monica, she asks if he’s finally found Jesus.

“In a jewelry store,” Sam replies.

A man says, “Art will give you crowns in heaven and laurels on Earth.” A character calls something a “glory, hallelujah moment.” Paul’s love for Mitzi is such that Sam says that he “worships mom.”

Sam mentions his circumcision to two Christian high school girls, causing them to giggle. One of the girls, Monica, invites Sam over to “pray and invite Jesus into his heart,” though it’s obvious that she really has other acts on her mind. Indeed, when the two are alone in her room, their prayer is quickly ended when Monica attempts to physically breathe the Holy Spirit into Sam, resulting in them passionately kissing. They climb onto a bed to continue farther but are interrupted by Monica’s parents, and Monica tells Sam to meet her privately later so they can “pray some more.” Language regarding the Holy Spirit coming into a person’s heart is made to sound sexual, and Monica calls Jesus “sexy.”

Sam’s love of movies means that he brings his camera everywhere and films everything—and some footage reveals a long-hidden truth to him: His mother is having an affair with his father’s best friend, Bennie. Though we don’t see anything of note beyond holding hands and longing looks, it’s clear much more is going on.

During a camping trip, an inebriated Mitzi dances in a nightgown in front of her family, and the headlights behind her causes her silhouetted figure beneath to be clearly visible. The scene lasts for an extended amount of time.

Mitzi and Paul kiss occasionally. Other people are seen kissing. Men and women are seen in swimsuits. A prominent movie director bursts into his office with lipstick marks left from kisses on his face. While discussing how to save a drowning person, Sam’s sisters joke about how Sam wouldn’t be able to save a girl due to him being required to touch her breasts, and the siblings squabble over the subject for a moment.

[Spoiler Warning] Eventually, Mitzi reveals her affair to the family, and she later decides to leave to marry Bennie, stating that “you do what your heart says you have to,” which, in this case, is apparently to ignore the warnings of Jeremiah 17:9 and to abandon your family for selfish desires.

As Sam produces his movies, we see acted out violence for the sake of his stories. For instance, an early scene shows Sam’s sister getting a tooth pulled and spitting up ketchup to imitate blood. Another movie throws a dummy off a cliff to imitate a killed gunslinger falling to his death. Later movies have higher quality, using fake blood as people in a World War II film are shot and killed.

But not all the violence in The Fabelmans stays within the depictions in Sam’s movies—some of it comes into Sam’s real life. At one point, Sam’s mother smacks him on the back in anger, leaving a deep red handprint. And when Sam accidentally elbows another high school student named Logan in the face during a game of volleyball, he and his friends use the moment to instigate their anti-Semitic bullying of him.

“Apologize for killing Christ,” one of them says (and when he repeats it, he instead says “our Lord,” indicating Christian belief). Logan punches Sam in the nose, and the bruised and bloody result is clear. Later, Logan punches a locker (and another student).

When a tornado touches down, it causes powerlines to shoot sparks as they break. A woman passes away in the hospital. A man pinches Sam’s cheeks to the point where Sam yells out in pain. A monkey smashes some lightbulbs.

During a camping trip, adults drink whiskey, and Mitzi is visibly inebriated. A man says, “We’re junkies, and art is our drug.” People smoke cigarettes and cigars.

A note of disdain is made regarding a prominent 1960s political figure. Boys laugh about a story of a girl who had a booger on her nose. As mentioned, anti-Semitism is another theme here, such as when Logan leaves a bagel with the words “Jew hole” written on it in Sam’s locker.

Sam Fabelman loves film. The sound of the camera brings him comfort, and the magic behind the movies draws him like no other. Art is in his blood.

He got it from his mother—her skills on a piano are such that she could have played any concert hall in the world. But as for Sam’s father, art is merely a hobby: something to be enjoyed but not pursued as a career. And though the family’s love for one another is evident, it’s also clear that there’s a growing rift of discontentment that such a dividing line only stands to accentuate.

Steven Spielberg’s The Fabelmans tells a coming-of-age story loosely based on the famous director’s childhood. And as Sam grows up, he also grows in his craft—and the world changes, too. The tone of the movie itself starts out with a child-like nostalgia that’s reminiscent of gathering around a bulky TV to watch family home videos.

It isn’t long, however, before Sam matures, and our viewing experience matures with him. Sam is introduced to the broken realities of the world. He’s bullied for being Jewish. He discovers that his parents’ marriage has more cracks than they let on. Things feel out of control.

But when Sam’s behind the camera, the story is his to tell. He’s the one filming, so despite the chaos that may abound, he takes solace in being able to tell the story of it all.

The Fabelmans tells a compelling story, one that exercises restraint in some areas where it could have been told much more viscerally. That said, we’re still exposed to some violence, language and sexually suggestive moments. And the Christians in the film are either anti-Semitic or used as the butt of a joke.

Sam’s passion for filmmaking will certainly be evident throughout the movie’s two-and-a-half-hour runtime. But so will all of the mature topics and concerns Sam faces. And they just might be enough for you to fold up your director’s chair and head out.